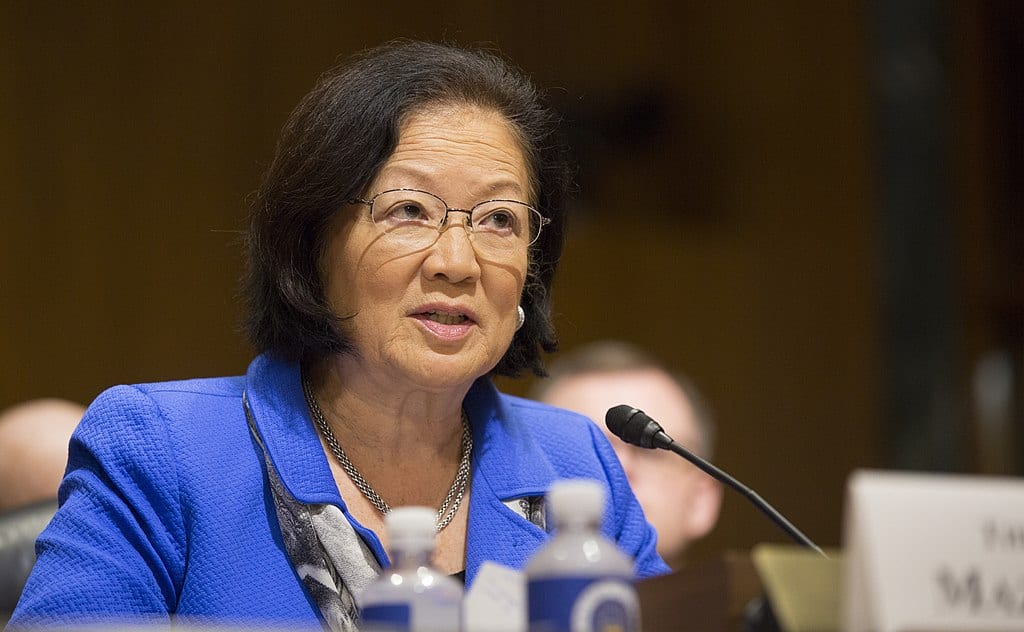 Those of you waiting for things to become a little more statesmanlike, or even coherent, in “the world’s greatest deliberative body” can put your feet up and relax. It’s going to be a while longer. Maybe a lot longer.

Two of the Senate Democrats’ main picadors in the unsuccessful attempted knee-capping of now Supreme Court Justice Brett Kavanaugh are at it again. This month California’s Kamala Harris and Hawaii’s Mazie Hirano landed on Omaha lawyer Brian Buescher, nominated by President Trump to serve on the Nebraska U.S. District court, for, of all things, his membership in the Knights of Columbus.

That’s right, the Knights of Columbus, a venerable Catholic fraternal, service, and charitable organization that has been committing good works, including helping the sick and needy, since before Harris’s and Hirano’s grandparents were born. The Knights also support traditional Catholic values and social policy. And this is the rub, according to Democrats on the Senate Judiciary Committee.

Harris questioned whether membership in this retrograde (according to secularists) organization would impede Buescher’s ability to hear cases before the federal court fairly and impartially. She asked Buescher if he agreed with Supreme Knight (the K of C chief executive) Carl A. Anderson’s statement that abortion is “the killing of the innocent on a massive scale.” Buescher replied he wasn’t responsible for the Knight’s statements and policies and that as a judge he would be guided by law and precedent in all areas.

In written questions sent to Buescher by the committee, Hirano harrumphed, “The Knights of Columbus has taken a number of extreme positions.” (Note how Democrat questions sound more like accusations.)

Considering the source, that’s a real knee-slapper. We all remember the amazing Mazie. She’s the one who during the attempted Kavanaugh takedown suggested that all men are swine and should just “shut up and step up.” (As Ring Lardner would have phrased it, “Shut up, she explained.”) This sexist non-sequitur, and downright extreme position, was Mazie’s contribution to the question of whether Kavanaugh, a man with a spotless adult life, had sexually assaulted a 15-year-old at a party long ago at an undetermined place, during an undetermined year, and under vague circumstances that no one but the accuser remembers.

Senator Hirano earned a law degree from Georgetown University in 1978. Was this where she learned the legal concept of innocent until proven male? And if Mazie is truly worried about membership by Judicial nominees in organizations that take “extreme positons,” what about membership in her own Democratic Party, which takes little other than extreme positions? Just asking.

Cory “Spartacus” Brooker stuck his oar in oar in with this: “Why should a litigant in your courtroom expect to get a fair hearing from an impartial judge in a case involving abortion rights?” The question — once again more of an accusation than a question — presupposes that no judge who is personally pro-life can separate his own personal beliefs from the law, and that every litigant in a case involving abortion is on the pro-death side. No indication that Brooker, or any of the committee Democrats, is concerned about whether the Little Sisters of the Poor could receive a “fair hearing from an impartial judge” who had been a member of Planned Parenthood. Or if an industry litigant could get a fair hearing from a judge who was a member of the Sierra Club.

Kathleen Bloomquist, a spokeswoman for the Knights, told the Catholic News Agency that the questions of Democrat senators reflect the kind of anti-Catholic bigotry that brought about the founding of the Knights of Columbus in the 19th century. She lamented that for some senators adherence to Catholic teaching is a disqualifier for public office.

Bloomquist is right. Bigotry is the exact word. But alas, as the Democrat members of the Senate Judiciary Committee have demonstrated once again, bigotry is acceptable in their circles if directed at the politically correct targets. If Democrats are doing the vetting, Christians who take their faith seriously need not apply.

Fortunately for Buescher, his nomination will be decided by the full Senate, where Republicans hold a 53-47 majority, not just by the bigotry caucus on the left. But that doesn’t stop the latter from hamming it up for home consumption, and in the case of a couple of the hams, for clips to use in presidential campaign ads. A sorry business, but there it is.