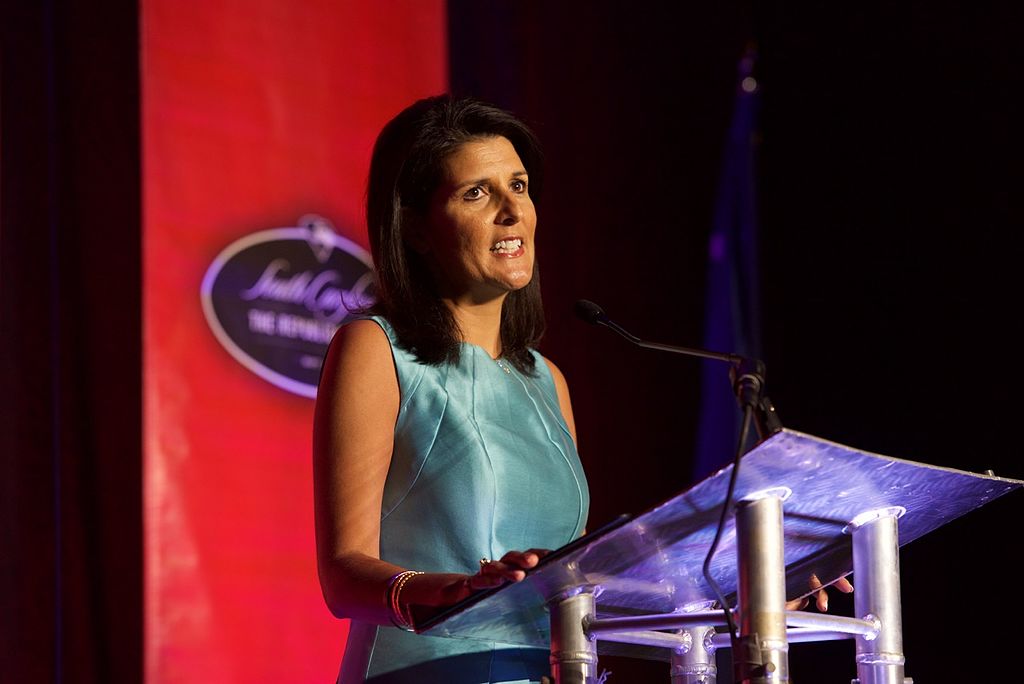 During the Reagan Administration, if a Cabinet member or other official wanted the prestige of an op-ed publication in the Washington Post, New York Times, or other major newspaper, he needed explicit approval from the White House for the text and the placement. So it was too for national television interviews. Toward the end of Reagan’s second term, as public affairs officer for the president’s senior arms control advisor, the late General Edward Rowny, I knew these rules all too well.

My esteemed boss unceasingly wanted his by-lined articles published in the opinion pages of the Post, the Times, the Wall Street Journal, and other top venues. I had to ask permission from White House press secretary Marlin Fitzwater’s deputy for national security affairs, Roman Popadiuk. Sometimes approval was given, but most of the time it was not. All of the relevant bureaus of the State Department, as well as the White House, had to sign off on a text before it could be published.

Nikki Haley’s remarkable piece in the Washington Post last week made me recall this aspect of “message discipline” during the Reagan days.

I find it hard to believe that her text or its publication were approved by the Secretary of State or the White House.

Before I had worked for General Rowny, I had a lowlier position on the staff of Ambassador to the United Nations Jeane Kirkpatrick. I did not interact with the White House on her behalf, but I observed how it was done.

From my experience at the U.S. Mission to the United Nations, at State Department headquarters in Washington, and at the White House where I worked for George H.W. Bush, I can say it is inconceivable that an article of the sensitivity of Nikki Haley’s could have been published without the explicit approval not just of press secretaries and chiefs of staff, but of the principals.

Jeane Kirkpatrick would not have been allowed to publish a piece as sensitive as Haley’s without personal approval from President Reagan and Secretary of State Shultz. Going rogue in such a fashion very well could have made her lose her job.

Those of us who care about the effectiveness of our government therefore should demand answers: Did Sarah Sanders, John Kelly, Mike Pompeo, and President Trump agree to the drafting and placement of the Haley article? Did they really decide to give Nikki Haley the unique privilege of publication of a self-serving article in the Post, a privilege denied to all other administration officials? Or were the president and his top advisors blindsided by Haley?

It’s an unpalatable chore to have to re-read Haley’s “Song of Myself.” But I urge everyone to re-read it closely. It is a textbook example of how an extravagantly ambitious, insubordinate presidential appointee navigates The Swamp.

Haley wants us to suspend the principle of non-contradiction. She wants Never Trumpers to esteem her as an “adult in the room” while she poses at the same time as the president’s most vehement defender against the gutless anonymous New York Times scribe.

She wants us to believe that she tells the president right to his face that he’s a knucklehead — and he listens and thanks her for her selfless service and brilliant advice.

If anyone remembers the movie Walk Hard, Nikki Haley is a distaff Dewey Cox: “Dear Mr. President, I want you to know, I am deeper than you. Listen and learn.”

Many of us who voted for Trump did so in large part because of his promises to change American foreign policy from the sad state it had slumped into under Obama and the younger Bush. We have much to regret about Nikki Haley, with her abundance of ambition and utter lack of foreign affairs knowledge and experience, having a seat in the Cabinet and the National Security Council. Everyone with the president’s best interests at heart should wish she had never been appointed.

Jeane Kirkpatrick’s biographer Peter Collier tells a classic story about the great scholar-diplomat. At the 1983 Gridiron Dinner, Kirkpatrick had been seated at the head table near Reagan consigliere Mike Deaver.

Deaver began to butter her up. Reagan, he said, “always listens when you speak. He looks at you and his eyes light up. Maybe it’s because you’re a woman.”

I never expect to meet Nikki Haley. If I were to encounter her, I would give her this deflating information:

Joseph Duggan, who worked in the State Department and White House for the Reagan and first Bush administrations, is an investor and consultant in St. Louis.