The ongoing saga of the NBA’s love affair with a repressive state took an interesting turn last month when Enes Kanter Freedom was cut from an NBA roster. Thus has been eliminated the only player in the league with the sand to complain about the Uyghur genocide and forced labor in clothing and shoe manufacture in China. As of this writing, he has not been picked up by another team, and at least one anonymous NBA general manager, and Freedom himself, thinks he’s played his final NBA game.

A native of Turkey and a victim, with his family, of persecution by the Turkish government, Freedom changed his name from Enes Kanter to Enes Kanter Freedom upon being granted U.S. citizenship last November. He has been an outspoken critic of repressive governments, including Turkey and Venezuela, but his criticism directed at China, and at NBA players making money on the backs of alleged forced labor in China, has caused the most stir.

He lambasted the Winter Olympics and called the U.S. diplomatic boycott “not enough.” He has called out Nike for its silence about Chinese oppression. “You are scared to speak up,” Freedom said. “Who makes your shoes in China? Do you even know? There are so many forced labor factories in China…. For instance, Uyghur forced labor. A modern-day slavery. And it is happening right now in China.” He went after Yao Ming, the face of Chinese basketball, adored in the country. He scribed pro-freedom, anti-China messages on his basketball shoes.

And he took after LeBron James for his silence on the Uyghur genocide: “Money over Morals for the ‘King,’ ” he tweeted. “Sad & disgusting how these athletes pretend they care about social justice. They really do ‘shut up & dribble’ when Big Boss says so.”

The English-language mouthpiece of the Communist Party of China, the Global Times, was gleeful to see him cut, calling Freedom “ignorant and arrogant on China’s core interests and internal affairs such as those involving Xinjiang, Xizang, and Taiwan.”

As for the feelings of the NBA itself, you have to wonder. 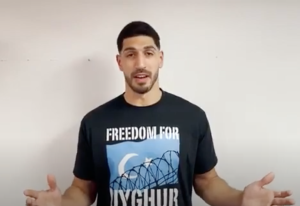 China is a country of 1.4 billion people in love with basketball, with as many actual players as the U.S. has people — 300 million — and a televised audience for NBA games well over half a billion (640 million watched the 2017–18 season, according to CNBC). The league reportedly garners 10 percent of its global revenue from Chinese partnerships. Games are televised, NBA teams visit the country for preseason games, NBA stars tour the nation to widespread adulation, the Chinese people walk around with NBA players’ names on their backs, stars boast big shoe and clothing deals with Chinese companies. The NBA and its stars make a lot of money in the superpower of Asia.

But when China sent muscle into Hong Kong in October 2019 to quell pro-democracy protesters, an NBA general manager, Daryl Morey, of the Houston Rockets, pecked into his Twitter account the following: “Fight for Freedom. Stand with Hong Kong.”

Within a day, Chinese basketball authorities had yanked preseason games off TV and streaming services. The Rockets, known as “China’s team,” because Ming played eight seasons with them, became as “disappeared” as a Chinese tennis star — no games on TV, no Rockets gear available on some Chinese websites.

Soon afterward the NBA, and the Houston Rockets, were backpedaling faster than a defender trying to get in front of a Giannis Antetokounmpo drive to the basket. The league said it was “regrettable” their friends in China took offense at the tweet, and the Rockets said Morey spoke only for himself, not for the team. At least one other team owner, Joe Tsai of the Brooklyn Nets, joined the chorus of denunciation. Morey, too, backed down, deleting the tweet and attempting to flee the hubbub.

It might be unfair to expect an Oscar Wilde–level appreciation of irony here, but the NBA players’ self-absorption is remarkable. Players in the widely acknowledged “wokest” of the “woke” professional sports league were at this time wearing message T-shirts and preaching social justice at awards ceremonies. In a year they would be kneeling in unison during the anthem and playing on courts boasting political signage in uniforms that blared “woke” slogans. But some of the biggest stars in the game came down hard on Morey for his temerity in criticizing a regime that was firing live bullets at citizens demonstrating for freedom.

It might be unfair to expect an Oscar Wilde–level appreciation of irony here, but the NBA players’ self-absorption is remarkable.

Other recent incidents have highlighted the NBA’s China “problem”: the fact that the league is making billions of dollars via contracts with companies from a totalitarian, repressive state.

In January, a part-owner of the Golden State Warriors confessed what many suspect about the NBA in general: “Nobody cares about what’s happening to the Uyghurs,” Chamath Palihapitiya said on a podcast. “I’m telling you a very hard, ugly truth, okay. Of all the things I care about, yes, it is below my line.” He quickly backed down, of course, but the truth of his statement is born out in the subsequent silence of the NBA and its stars. (READ MORE: Hypocrisy in Its Purest Form: NBA Team Owner Says ‘Nobody Cares’ About the Uyghur Genocide)

Also, late last year President Biden signed into law a bill banning all imports from the Xinjiang region of China, where the Uyghurs are held in labor camps. This has generated another round of criticism of players garnering big money from shoe and clothing deals with Chinese firms, but no official action from the NBA or news of star players dumping their lucrative deals.

“It’s Gotta Be the Shoes”

Shoes became political billboards in the NBA shortly after the death of George Floyd. NBA players took Sharpies to their sneakers to express their views — “Black Lives Matter,” “Say Their Names,” “Ready for Change.”

On October 20, 2021, in a Celtics game against the New York Knicks, Freedom unveiled his idea of protest shoes: they were, according to one report, “designed by a dissident Chinese artist, with the yellow, blue, and red of the Tibetan flag; a roaring lion; a man in flames; and the words free Tibet.”

By halftime the Chinese NBA affiliate had jerked the game off the streaming platform, and would not show another Celtics game for the remainder of the season, because of his shoes.

The shoe scribbling continued, however, with pointed but diverse messaging: “Free Uyghur,” “Stop Genocide,” “Slave Labor.” Against the Lakers Freedom mocked James with his shoes; against Charlotte he took a shot at Hornets owner Michael Jordan, as Nike’s factories in China have been accused of using Uyghur forced labor.

As the season progressed, his shoes were seen less and less on NBA floors and more and more on NBA benches — he played in only about half of the Celtics games, with paltry per-game averages. Freedom said he was being blackballed for his anti-China views; the Celts said he was a liability on defense.

In the late afternoon of the day of the trading deadline, Boston shipped him to the Houston Rockets, “China’s team,” and the Rockets waived him within minutes.

Freedom is a serviceable big man with a very nice 11-year stint in the NBA. He averaged double figures in career points, and as late as 2020 played in every game as a Portland Trailblazer, notching 11.2 points and 11 rebounds in the 24.4 minutes per game he played.

Whether he was let go for basketball reasons or because he is an outspoken critic of China, and of NBA players who coddle China, will be debated. With the game evolving to what is tantamount to a long-range shooting contest, with even big men asked to launch three-pointers, Freedom’s old-school around-the-basket skills may not translate. He’s also been slammed for weak defense, and particularly for his inability to defend the pick-and-roll. Still, one would think a team on the playoff “bubble” might like a 6 foot, 10 inch center who goes hard to the boards for the stretch run.

The offending shoes are gone now, and with the departure from NBA courts of the man who wore them, the NBA and its millionaire players have one fewer voice nettling their consciences as they cash in on Chinese oppression.

Image: This file has been cropped and is licensed under the Creative Commons Attribution 2.0 Generic license.