Cultural Decline,Top Story Confederate Monuments The Myth of Righteous Vandalism - The American Spectator | USA News and Politics
Menu
Cultural Decline
The Myth of Righteous Vandalism
And why historians should not endorse it.
by Vahaken Mouradian
Statue of Jefferson Davis in Richmond, Virginia, June 10, 2020, the day it was toppled during a protest (Kim Kelley-Wagner/Shutterstock.com) 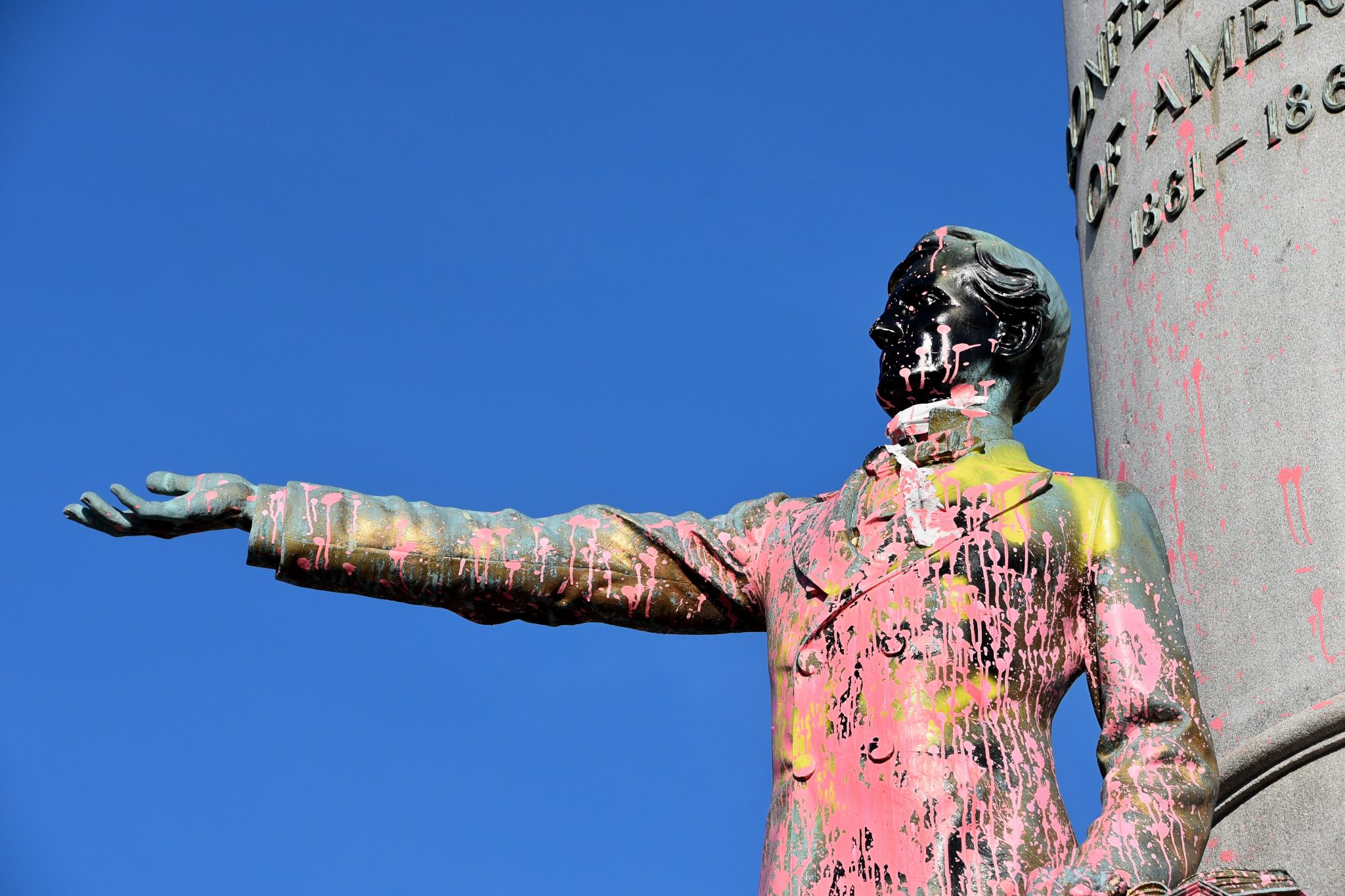 The fevered frenzy against public monuments has caused varied reactions. Among scholars, the main symptom is seemingly contagious dispassion. When a New York Times columnist spoke with art historian Erin Thompson, for example, their interview closed with Thompson recommending the use of chains for those interested in inverting large objects. She appears to have an affinity for neither art nor history. Thompson may have caught the bug from archaeologist Sarah Parcak, who recently — and apparently satirically — briefed mobs struggling to dislodge obelisks. “It is sometimes complained,” drawls historian William Cavert, “that such acts erase history.” According to him, that is a popular grievance against the destruction of statues that historians and scholars almost universally dismiss.

Destroying historical monuments erodes our knowledge of the reasons and sentiments of our predecessors who espoused them, and of how far we have come.

To inoculate the rest of us, let’s try to inhale and expose ourselves to the astonishing notion that these scholars seem to endorse: that statues are useless and that we derive historical knowledge only from archives, documents, and “objects preserved in libraries or museums.” Only if this is true — if statues can bear no intellectual or artistic value — would our indifference be justified. But if there is any value inherent in objects that a community once used publicly and symbolically, we should reconsider.

First, the physical evidence of Confederate monuments is what has generated much of the indignation towards them. This evidence directly contributes to historical knowledge.

Second, even if all Americans today deem artifacts from a certain era to be worthless, we shouldn’t decide on behalf of future generations.

Finally, it is improbable that historians agree on the worthlessness of statues (academic consensus sounds like an oxymoron), despite what Cavert claims. Dissenters shouldn’t allow a few of their colleagues to speak on their behalf, because this indifference could be transmitted to the broader public and could become endemic.

Confederate monuments’ location, imagery, inscriptions, dates, and materials of construction, cost, and commission show what the communities who built them valued and what reasons they had for doing so. In the past decade, Timothy Sedore, Thomas J. Brown, and Douglas J. Butler have catalogued and produced works reliant on this evidence. Protesters (and observers) today glean Jim Crow–era historical insight while destroying its sources, and they are the last ones who will ever be able to do so directly. The primary evidence they offer — complementary to archival and secondary sources — of which there can never be enough, is gone. Art historians would never argue that Myron’s Discobolus is useless, even though plenty of documents illustrate it and the cultural tradition it represents. Why are Confederate statues uniquely worthless?

It would be myopic of a historian to decide that there is enough evidence to reimagine any bygone time, because that will not always be the case. We do not own historical artifacts; we owe them to our successors so that they, too, can subject them to etiological and aesthetic scrutiny as we can. We endlessly refine academic study by using new evidence or revisiting the old with new methods. To destroy these monuments is to rob future generations of that opportunity. The community does not, at any and every moment, share the moral or political sentiments of those who built its public monuments. But destroying them erodes our knowledge of those reasons and sentiments, of our predecessors who espoused them, and of how far we have come.

A political community is material as much as social. After 1974, when Turkish occupying forces in northern Cyprus renamed streets and towns, their motivation was replacing what came before. When most calculated, such acts attempt to expunge a community with which the actors aren’t planning to cohabit. When least calculated, they channel vicarious retribution against an inexcusable past. Now, the destruction of landmarks alienates community members who have natural, apolitical, personal, or familial associations with the material backdrop of their lives. Such acts make sense for culturally dissimilar invaders, but not for co-citizens who eventually intend to resume a shared life.

Historians, before all, should be well aware of all this. One hesitates to assume collective indifference among scholars. I have a suspicion: most historians have chosen to abstain from this controversy. They shouldn’t. Without learned opposition, the attitudes of the few — ascribed to the entire discipline — will proliferate. And in what position will the cognoscenti be when the protesters of tomorrow naturally aim at new targets? George Washington’s legacy is already embattled; one hears violent murmurs about Mount Rushmore. Perhaps the authors of the Declaration of Independence or the United States Bill of Rights will follow. Even the statue of an immigrant abolitionist and Union colonel has been irreparably damaged. And why would less conspicuous but no less symbolic art — portraits, literature, and intellectual and academic works in public libraries — be exempt from retrospective opprobrium?

Woe to us when we inevitably realize — having leveled our cultural landscape — that our particular moral sensibilities were self-evident to no generation but ours.

Vahaken Mouradian is a Cypriot-Armenian immigrant to the United States, working at a social-impact nonprofit in Washington, D.C. He holds a Bachelor’s degree in Politics, Philosophy, and Economics, and a Master’s degree in International Security.