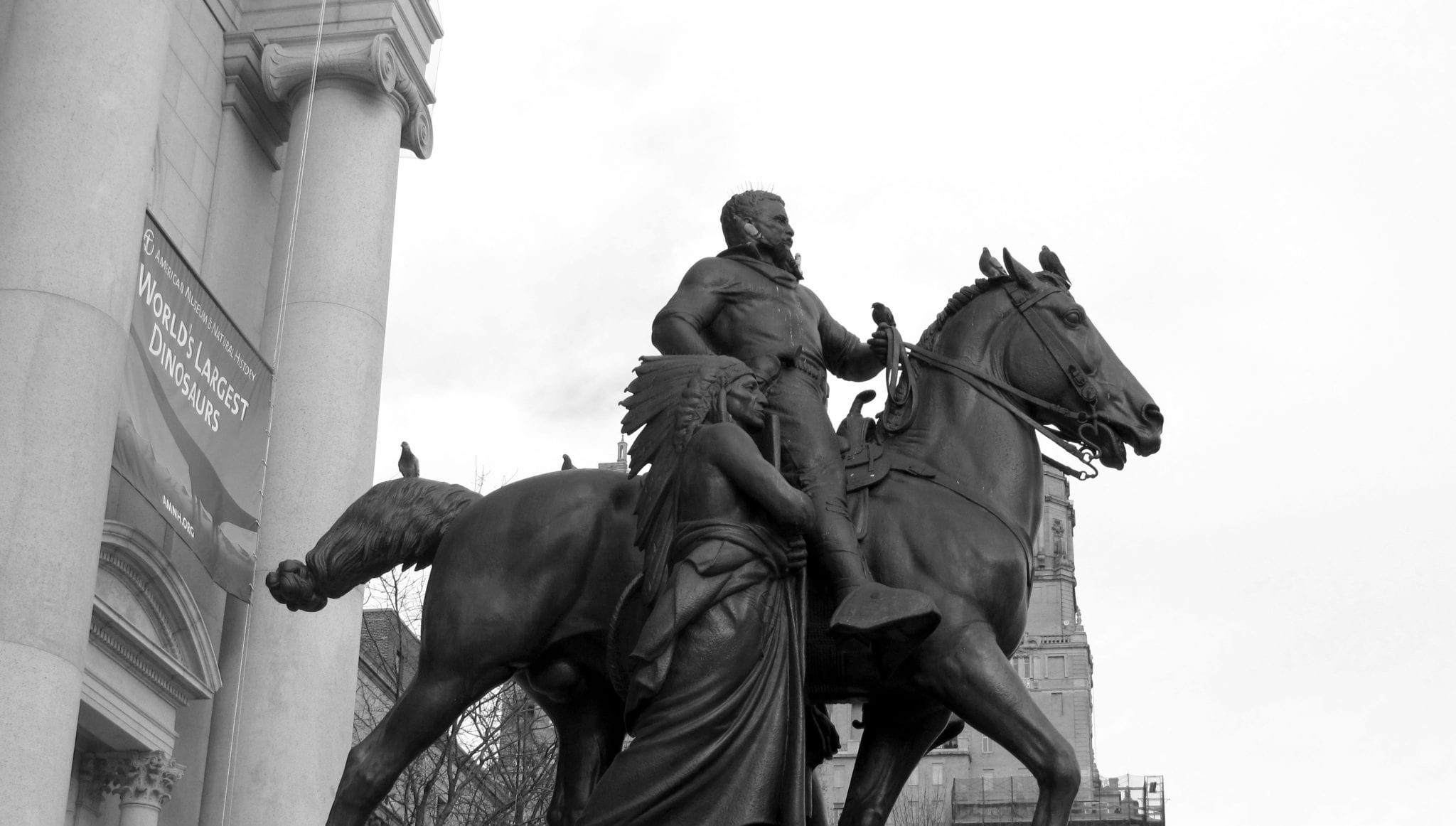 “History is written by the victors,” Napoleon is supposed to have said. “History is nothing but agreed-upon lies,” Napoleon did say. Like Julius Caesar, his military victories swept away rival rulers. They both were honored in their times but also bitterly resented by the vanquished, and by some allies. Their places in history? Julius Caesar was murdered by friends, Napoleon exiled twice by his own people. And yet they are mostly praised in history books, and Napoleon rests in one of the world’s magnificent tombs, in Paris.

Historical statues speak to their times, or earlier times; they reflect the worldviews of those who commission and sculpt them; they are also works of art that can teach lessons of their own.

These days it is the victors over the headlines who rewrite history. “Cancel culture” is the euphemism for those who would destroy and rewrite history, or forget it and substitute what and where they can. In the short term, they are succeeding. The evidence of their success is the ability to convince the public and the press that nihilism and vandalism is really a tribute to recent black victims of violence. They have succeeded by the metric of reactions: the flaccid response of police, local authorities, opinion-makers, and even the White House — most people in these offices rattling swords or empty scabbards. This is the barometer of a civilization.

What fails to evoke outrage is as much a measure of what a society cherishes as what it would defend to the death.

Because of my own interests as a trained and published historian and someone who attends to documentation of Theodore Roosevelt’s own history, the controversy over the statue at the American Museum of Natural History, facing Central Park, has caught my attention. Here, in the manner of a personal coincidence, I hope to see where admirers of TR, including descendants and organizations devoted to his history, might draw a line in the sand and say to the barbarians inside the gates, “No more; not with this man; not a desecration of history itself.”

Observers make much of the imagery — proud freed slave and native American — joining the man who championed their classes more often than other presidents of the time. They grudgingly concede good intentions of the day but an arrangement painful and demeaning today. We have not yet heard that the horse is taller than the two figures and therefore an insulting hierarchy. But we will.

Historical statues are not and cannot be relevant — that is, reflecting the sensibilities of those who view them — every passing year into the future. They speak to their times, or earlier times; they reflect the worldviews of those who commission and sculpt them; they are also works of art that can teach lessons of their own.

These factors have always been the case, whether we consider cave paintings, images on Grecian urns, frescoes, tapestries telling of great battles, or icons and Christian art in paintings, stone, or stained-glass. Throughout history, however, succeeding cultures have consigned dead or even offensive works to museums and galleries … or to the trust of people’s common sense. When spasms of religious zealotry have occurred, most recently the Taliban’s destruction of amazing Hindu sculptures, reputedly sophisticated people have condemned the acts. Not anymore. 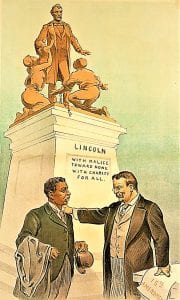 A 1903 cartoon showing Roosevelt and Booker T. Washington in front of the “Emancipation” statue in Washington, D.C., which is today under threat of vandalism and destruction. TR had invited Washington to dine at the White House during his first days in office, drawing predictable ire from many sections of the country. The cartoon’s caption: Justice vs Prejudice — “Lincoln emancipated you; the people gave you citizenship; and I will protect your rights.” By Joseph Keppler Jr. in Puck magazine, 1903.

We are, suddenly, in one of those moments in history where culturally self-loathing mobs roam about, seeking whom and what to kill and destroy; and just as inexplicably, an established society watches, chattering behind hankies but doing nothing. There are historical affinities, but no templates: it seems odd that blacks who can never fail to be horrified that slavery existed, and who recently have achieved record levels of employment and rising income, should now consider looting, murder, and vandalism as legitimate acts.

It is also notable that these days, current history and research into our past makes history more relevant. Its clearly positive progress enables descendants of Oppressors and Sub-Oppressors alike to be citizens of greater empathy. Instead of fostering understanding, these advances inspire rage.

I take the terms Oppressor and Sub-Oppressor from Paulo Freire, who wrote the influential Pedagogy of the Oppressed in 1968, one of the cornerstones of Marxist theory in schools and colleges for half a century. This is merely one of the radicals’ planted seeds that are sprouting now. Some view Freire as a prophet, but his Aristotelian vision has been turned on its head. He predicted that at our stage of history, the Oppressor class would resort to domestic forms of conquest, manipulation, “divide and rule,” and cultural invasion.

Sub-Oppressors, at this stage of revolutionary development, he predicted would resist “anti-dialogical” actions and adopt unity, compassion, organization, and cultural synthesis. So there has been what Jean Shepherd called the Great Role Reversal in one more context, which could paint a rosy picture for the revival of traditional American values and progress. But the establishment has become lax. Softened by prosperity? Numbed by our own versions of bread and circuses? Have we allowed patriotic standards and spiritual values to become irrelevant?

The rioters have not forgotten history; they never knew it. We, rather, the vast and very silent majority, have forgotten it.

The streets and parks of American cities and towns are littered today with the twisted and shattered statues of onetime heroes. There is much shattered glass that the scenes could look like memorials to Kristallnacht. Shops emptied of merchandise, food, and appliances … as empty as the ruined dreams of small entrepreneurs, many of therm struggling blacks. Manufacturers of spray paint are the sure winners at the moment.

And proof that this “movement” and these “protests” are crusades of militant anarchists is the death toll of toppled personages. Besides Confederate generals, the broken stone and twisted metal includes Union generals who defeated slavery, architects of democracy whose flaws and sins were outnumbered by redeemed acts that have blessed later generations, poets and preachers, Ghandi, and even a rock musician. Lash out blindly, virtue warriors! And pass on the cost of your vandalism to normal citizens.

A society that does not counter the spreading infection of street mobs — especially as they are photographed and videotaped, clearly subject to identification — has lost the will to live … and the right to exist. 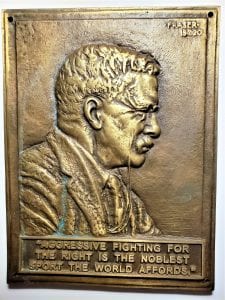 James Earle Fraser, the sculptor of the equestrian statue memorialized Theodore Roosevelt in other ways, other forms. In 1920 he sculpted this bronze plaque (13 x 9 inches; bronze, 8 pounds) for walls of public buildings and schools. It was so popular that it was issued in several forms, including as bookends and as smaller plaques. Fraser, a protege of Augustus St. Gaudens, also designed both sides of the iconic Indian head/buffalo nickel.

Until the final act of this Republic, I have a suggestion for the crisis at hand. I am inspired by the facial expression that sculptor James Earle Fraser bestowed on Theodore Roosevelt. I cannot be inspired by the hidden faces of putative Roosevelt supporters, who largely have been silent on the statue debate. Thank God for the New York Young Republican Club, bravely making a physical stand at the foot of the Theodore Roosevelt statue.

Some of the members of Roosevelt’s family and members of the TR organizations pleaded with me for historical data two years ago to argue for the statue when red paint defaced it and the mayor toyed with its removal. They now realize how “offensive” it is. TR himself called such weak arguments they employ as “weasel words.” And of course the dispositive factor, different than two years ago, is the actions of rioters and vandals — which means that the former supporters appear to have caved to the mob, nothing more.

This lunacy will not stop, and we cannot forever commit troops and young guardsmen to protect myriad statues, signs, and markers. President Grover Cleveland once said, “It is a condition, not a theory, that confronts us.” So it is now.

Before the “spontaneous” Antifa hordes set their sights on the Lincoln Memorial, the Washington Monument, the Statue of Liberty, Arlington Cemetery, and Mount Rushmore — all of them surely gleams in their eyes — let us work on this statuary matter.

Let us recognize that some of these vandals will keep going, with nothing else to do and no fear of arrests. Now people previously unaffected, but suddenly offended, by statues will be discomfited to varying degrees. And perhaps the style of stone and bronze statuary has become something of an artistic anachronism in 2020. And so forth.

A positive idea, and not a mere compromise, would be to establish a National Museum of Statuary, or a Gallery or Park of Notable Americans.

I offer these apocalyptic visions of America’s current trend with a heavy heart. The most troubling aspect of the consuming fire on America’s streets — not dumpster fires but the bonfire of the inanities — is how little foundation there is in peoples’ actions these days. No values, only resentments. No goals, only detestation of the past. No joy, just hate. I don’t believe I am being hyperbolic.

I have addressed questions of “this incident” or “that offense,” and, as I said, this heinous urban warfare is not about civil rights. I grieve for our country not because I am nostalgic for the “Good Old Days.” In all our personal and ethnic backgrounds we likely have enough to be proud of, and embarrassed by. What matters — what has to matter — is how we act today. We are God’s children, graced with God’s blessings. How we treat our neighbors, our families, our future, and ourselves matters. What a precious, precious gift we squander.

I return to Theodore Roosevelt, still on his horse, a few bronze warts and all. He is a role model, not a nit to be picked. Just weeks after he lost the 1912 presidential election, and still recovering from a point-blank bullet to the chest (and delivering a speech for 80 minutes, blood pouring down his shirt), he made a speech to American Historical Association. Yes, remember, he was a professional historian, and he had been elected president of that organization. The topic of his speech was “History as Literature.” Today, it seems that our society today regards “Literature as History” — something to be forged, invented, changed to fit our whims.

The broad American public should know what the statue-desecrating iconoclasts surely know: the only thing worse than trying to reinvent history is to make history irrelevant.

Rick Marschall is the author of 74 books, has taught at four universities, and currently writes three weekly blogs. His experience has included drawing political cartoons, serving as Editor of Marvel Comics, and writing for Disney. He has spoken overseas for the US Information Service of the Department of State. He serves on the Advisory Board of the Theodore Roosevelt Association and as Cartoon Archivist of the Theodore Roosevelt Center at Dickinson University.