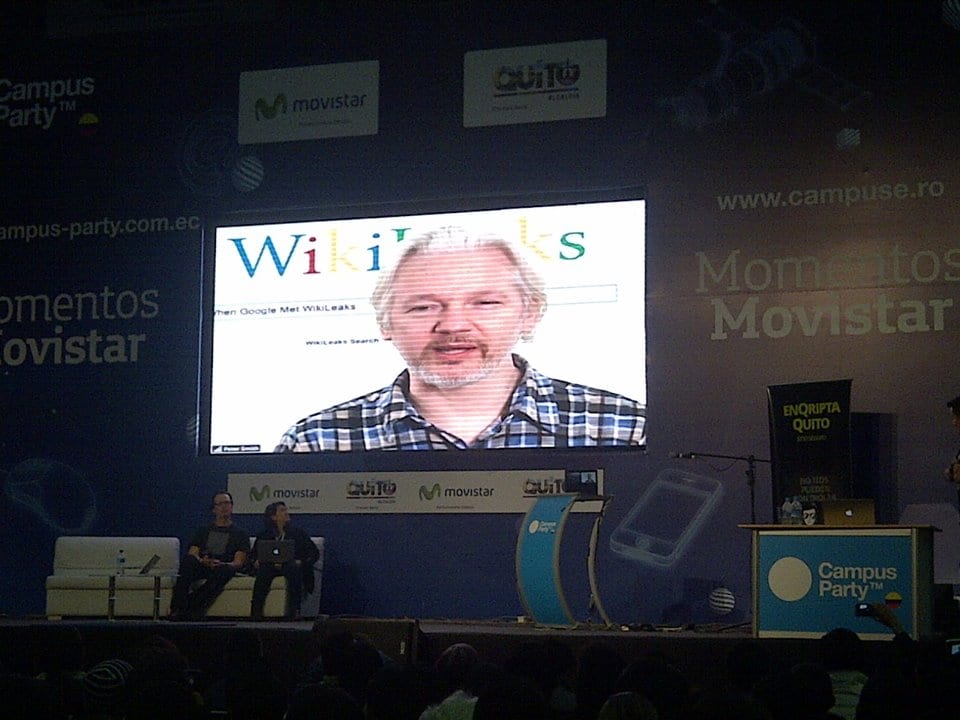 According to NBC News, Special Counsel Robert Mueller’s team recently began asking witnesses “pointed questions” about whether Donald Trump was aware that the Democratic National Committee’s emails had been stolen before that was publicly known, and whether he was involved in their “strategic release” during the presidential campaign. NBC states that the “line of questioning suggests the special counsel, who is tasked with examining whether there was collusion between the Trump campaign and Russia during the 2016 election, is looking into possible coordination between WikiLeaks and Trump associates in disseminating the emails, which U.S. intelligence officials say were stolen by Russia.”

Assuming NBC’s report is true, then it would appear that Team Mueller has put the cart before the horse. Before chasing after Trump-Russia collusion in the hacking of the DNC’s email server, they need to first establish whether a hack even happened.

On June 15, 2016, CrowdStrike, a private computer security company working for the Democratic National Committee, announced that it had detected Russian malware on the DNC’s computer server. The next day, a self-described Romanian hacker, Guccifer 2.0, claimed he was a WikiLeaks source and had hacked the DNC’s server. He then posted online DNC computer files that contained metadata that indicated Russian involvement in the hack.

Much to the embarrassment of Hillary Clinton, the released files showed that the DNC had secretly collaborated with her campaign to promote her candidacy for the Democratic presidential nomination over that of Bernie Sanders. This caused the Clinton campaign serious political damage at the Democratic convention.

Well after the convention, Jennifer Palmieri, Clinton’s public relations chief, said in a March 2017 Washington Post essay that she worked assiduously during the nominating convention to “get the press to focus on… the prospect that Russia had not only hacked and stolen emails from the DNC, but that it had done so to help Donald Trump and hurt Hillary.”

We now know that at about the same time that WikiLeaks made its announcement, the DNC and the Clinton campaign were funding efforts by Fusion GPS and its hireling, former British spy Christopher Steele, to dredge up anti-Trump dirt purportedly from Russian sources.

Ultimately Steele produced a dossier which former FBI Director James Comey has publicly characterized as “salacious” and “unverified.” Nevertheless, for reasons yet to be disclosed, Comey’s FBI saw fit to use that same dossier as a basis for obtaining a FISA warrant to spy on the Trump campaign and administration in its quest to uncover Russian ties to Trump.

Despite these revelations, the mainstream media have stubbornly clung to the Trump-Russia collusion narrative. And central to that the narrative is that the Trump campaign colluded with the Russians to hack the DNC email server.

But, in their coverage, the mainstream media have downplayed the very odd behavior of the DNC, the putative target of the alleged hack. For, when the Department of Homeland Security and the FBI learned of the hacking claim, they asked to examine the server.

And the DNC refused.

Why would the purported victim of a crime refuse to cooperate with law enforcement in solving that crime? Is it hiding something? Is it afraid the server’s contents will discredit the Russia-hacking story?

The answers to those questions began to emerge thanks to an article in the August 8, 2017 issue of the Nation. By no means a pro-Trump publication, the Nation published an exhaustive report about an exacting forensic investigation of the DNC hack by the Veteran Intelligence Professionals for Sanity (VIPS), an organization of former CIA, FBI, National Security Agency, and military intelligence officers, technical experts, and analysts.

As reported by the Nation, VIPS has a well-established record of debunking questionable intelligence assessments that have been slanted to serve political purposes. For example, in the run-up to the invasion of Iraq, VIPS courageously and correctly challenged the accuracy and veracity of the CIA’s intelligence estimates that Saddam Hussein possessed weapons of mass destruction and that he posed a threat to the United States. Similarly, VIPS has condemned the use of “enhanced interrogation techniques” on suspected terrorists. In short, VIPS can hardly be described as either a right-wing cabal or as carrying water for the Republican Party.

In its analysis of the purported DNC hack, VIPS brought to bear the impressive talents of more than a dozen experienced, well-credentialed experts, including William Binney, a former NSA technical director and cofounder of the NSA’s Signals Intelligence Automation Research Center; Edward Loomis, former NSA technical director for the Office of Signals Processing; and Skip Folden, a former IBM information technology manager. As the French would say, these are l’hommes serieux, as are the other computer-system designers, program architects, and analysts with whom they investigated the Clinton-DNC hack story.

As set forth in the article, VIPS’ investigative findings were nothing short of stunning.

First, VIPS concluded that the DNC data were not hacked by the Russians or anyone else accessing the server over the internet. Instead, the data were downloaded by means of a thumb drive or similar portable storage device physically attached to the DNC server.

How was this determined? The time stamps contained in the released computer files’ metadata establish that, at 6:45 p.m. July 5, 2016, 1,976 megabytes (not megabits) of data were downloaded from the DNC’s server. This took 87 seconds, which means the transfer rate was 22.7 megabytes per second, a speed, according to VIPS, that “is much faster than what is physically possible with a hack.” Such a speed could be accomplished only by direct connection of a portable storage device to the server. Accordingly, VIPS concluded that the DNC data theft was an inside job by someone with physical access to the server.

VIPS also found that, if there had been a hack, the NSA would have a record of it that could quickly be retrieved and produced. But no such evidence has been forthcoming. Can this be because no hack occurred?

Even more remarkable, the experts determined that the files released by Guccifer 2.0 have been “run, via ordinary cut and paste, through a template that effectively immersed them in what could plausibly be cast as Russian fingerprints.” In other words, the files were deliberately altered to give the false impression that they were hacked by Russian agents.

Thanks to the VIPS experts, the Russia-hacking claim — the very prolog of the Trump-Russia conspiracy story — appears to have been affirmatively and convincingly undercut.

Moreover, for what it is worth, Julian Assange has repeatedly denied that Russia “or any state actor” was the source of the stolen DNC data published by WikiLeaks. And his denials have just received oblique partial confirmation in a recent issue of the New Yorker which features a lengthy and sympathetic portrayal of Christopher Steele.

Buried toward the end of the article comes the revelation that, on July 26, 2016 (four days after WikiLeaks published the DNC emails), “Steele filed yet another memo” in which “Steele’s sources claimed that the [DNC] digital attack involved agents ‘within the Democratic Party structure itself…’”

All of this raises many questions concerning the purveyors of the Russia hacking narrative as well as the federal government’s failure to investigate the alleged hack.

After the DNC denied law enforcement access to its server, the FBI — under James Comey’s leadership — meekly agreed to accept the findings of CrowdStrike, the DNC’s private computer security firm, as to the server’s contents. This was in lieu of the FBI’s using legal process (such as a search warrant or forthwith grand jury subpoena) to seize and search the server for Russian malware and evidence of hacking.

Why did Comey and the FBI agree to such an impotent, absurd, and self-defeating arrangement?

Equally important, has anyone else other than CrowdStrike conducted a forensic examination of the DNC server, its contents, and the allegedly hacked emails? Specifically has Special Counsel Mueller done so?

If not, why not? And, if not, how much longer will this bizarre situation continue?

Mueller has been tasked with investigating the alleged Trump-Russia conspiracy. He is using a grand jury and has conducted a gangbusters-style dawn raid of the home of former Trump campaign manager Paul Manafort.

May we expect him to use similar aggressive tactics in dealing with the mysteriously recalcitrant DNC? Will the server at long last be subjected to a non-DNC-controlled forensic analysis? Will the server and CrowdStrike’s work product be analyzed to either confirm or disprove the presence of Russian malware? And, if none is found, will the special counsel investigate the persons responsible for that deception?

Will the DNC files released by Guccifer 2.0 be analyzed to determine if they were, as VIPS has concluded, altered to give the false impression that the Russians had hacked the server? If so, will Mueller pursue those responsible for the adulteration? If, as appears likely, the server was not hacked, will Mueller investigate why Hillary Clinton and the DNC claimed it was?

Will he query the NSA to see if it intercepted the purported hack?

Will he investigate whether the DNC files were stolen by someone who had direct physical access to the DNC server? Will he try to determine who at the DNC had a motive to leak the files? Could it be someone who wanted to make public Clinton and the DNC’s underhanded treatment of Bernie Sanders?

These are but a few of the areas of inquiry that any fair and competent investigator intent on getting to the truth would pursue. Will Mueller honestly and vigorously investigate them at the risk of incurring the anti-Trump media’s wrath and possibly exposing the Russia-hacking and collusion stories as carefully orchestrated falsehoods by Clinton and the DNC?

Or will Mueller and his cohort of Hillary Clinton fans bypass these avenues of inquiry and continue their single-minded pursuit of the President?

George Parry
Follow Their Stories:
View More
George Parry is a former federal and state prosecutor who practices law in Philadelphia and blogs at knowledgeisgood.net.
Most Popular
1
In Print Spring 2022
The Deeply Satisfying Destruction of the Ruling Elite
by Scott McKay