NEW ORLEANS — For the past three days at the Southern Republican Leadership Conference here, I’ve been shadowing Ray McKinney, a Republican candidate for Congress in Georgia’s 12th District. Just past midnight, the campaign staff exchanged high fives when they saw an online story from Larry Peterson of the Savannah Morning News:

Ray McKinney can’t be unhappy when he reviews the Republican 2008 primary results in the 12th Congressional District.
He’s making his second bid for the GOP nomination in the 12th, now represented by Savannah Democrat John Barrow. Two years ago, he ran second in a three-way race.
The political geography – where GOP voters and current candidates live, plus how people voted in 2008 – bodes well for him.
Not surprisingly, McKinney narrowly carried Effingham County, where he had lived most of his life until recently.
Effingham produced 29 percent of the GOP votes in the 2008 primary – more than any other county. . . .

The McKinney campaign, which won’t hold its official announcement event until Tuesday in Effingham County, Ga., already has more than $100,000 cash on hand. And there is more bad news for Democratic incumbent John Barrow.

Last week, I reported that MoveOn.org has targeted Barrow for having voted against ObamaCare and that because of the Democratic primary challenge from former state Sen. Regina Thomas, there were rumors in Georgia that Barrow was considering a switch to the Republican Party. Under pressure from liberal activists, Barrow adamantly denied the party-switch rumor to the Atlanta Journal-Constitution‘s Jim Galloway. However, the progressive Blue America PAC has produced an online video excoriating Barrow as a liar and endorsing Thomas, a video being promoted by the powerful Daily Kos blog.

Meanwhile, word at the SRLC is that the National Republican Congressional Committee is adding GA12 to its “watch list” — not yet a “targeted” district, but one of the races that the committee will monitor as the mid-term campaign develops. Also during the event at the Hilton in New Orleans, McKinney had the opportunity to meet with several GOP leaders, including Rep. Mike Pence, chairman of the House Republican Conference. 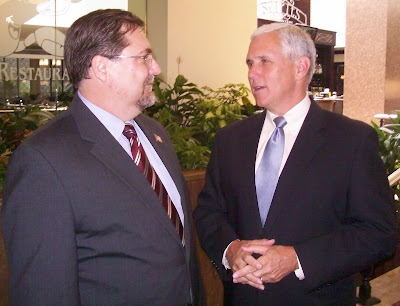