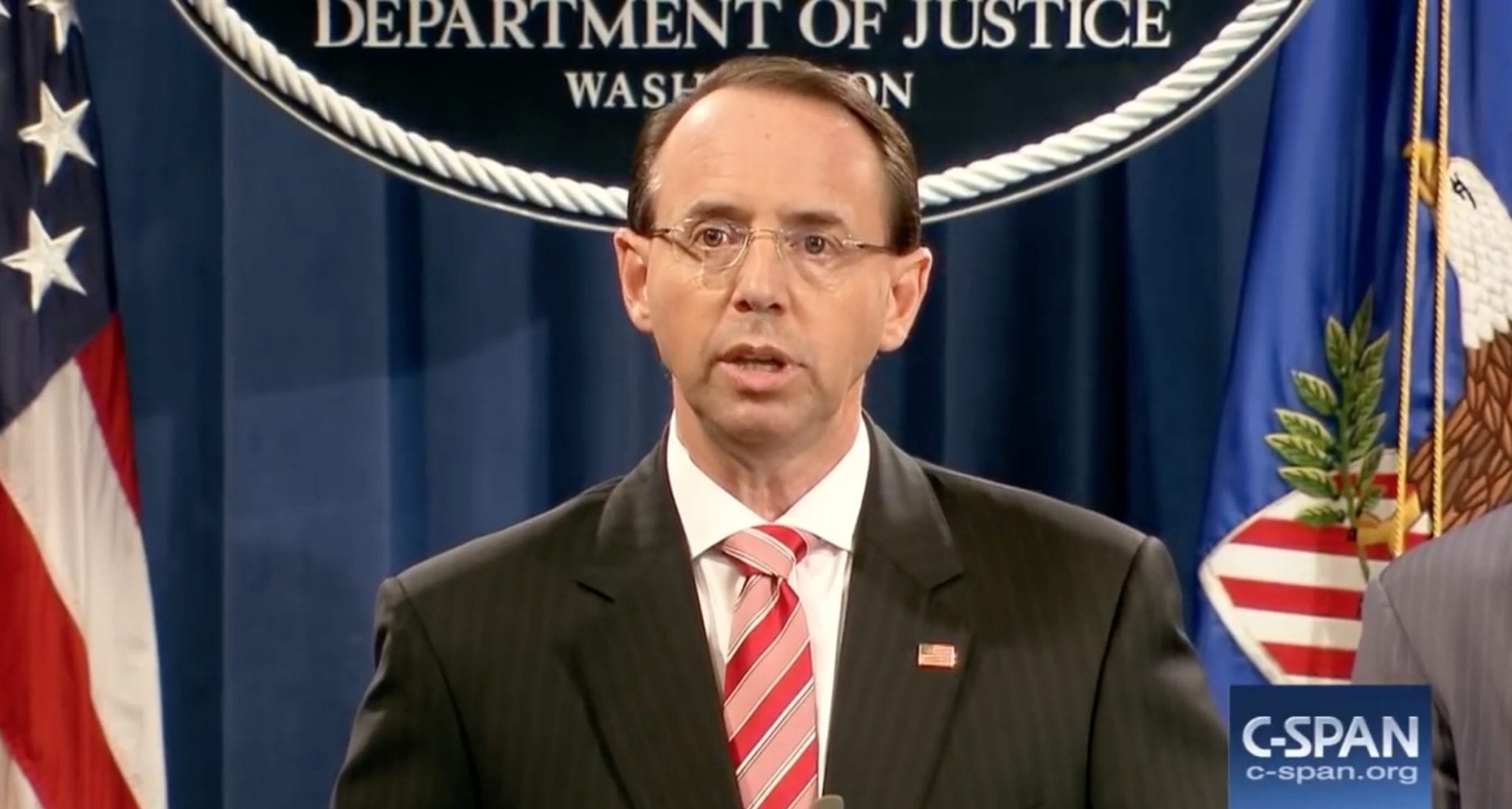 On Friday — three days before today’s summit meeting between President Trump and Russian President Putin — the boss of Team Mueller, Deputy Attorney General Rod Rosenstein, announced that a dozen Russian intelligence officers had been indicted on charges relating to Russia’s attempt to interfere in the 2016 election.

These Potemkin indictments could have been announced a month earlier or a month later. Instead they were obviously timed and intended to have an effect on the Trump-Putin meeting. Mueller has no business playing around with foreign policy. The Friday indictments were a truly despicable abuse of power.

Last February, Mueller conducted a dress rehearsal for the Friday indictments. Then, his grand jury indicted three Russian individuals and thirteen Russian companies for posing as U.S. persons, creating false U.S. personas, and operating social media pages and groups designed to attract U.S. audiences, all in furtherance of Russia’s attempt to interfere in the election.

Under our judicial system, defendants can’t be tried in absentia. Individuals have to appear personally although corporations can appear by counsel. Because Russia never extradites its citizens for trial, fifteen of the sixteen February defendants were neither extradited nor chose to appear willingly in U.S. district court.

(The one corporation that did served discovery demands on Mueller immediately. Defendants are entitled to “Brady material” – all the evidence that the prosecution will use in court and any exculpatory information in possession of the prosecution. A judge allowed Mueller to block that demand temporarily and keep all his information secret, delaying the trial indefinitely.)

As I wrote at the time, that indictment was a publicity stunt by Mueller because the Russian individuals and companies wouldn’t be extradited and had to voluntarily appear in a U.S. court for any trial. He could have just as effectively indicted Leonid Brezhnev or Yuri Andropov.

Mueller and Rosenstein knew that the GRU officers wouldn’t be extradited after the Friday indictments were announced. If the Friday indictments were a serious pursuit of Russian wrongdoers (which, perforce, they aren’t) they would have been handed up by the grand jury, sealed from public disclosure, and one or more of the people indicted lured to some jurisdiction where they could have been arrested and brought to the U.S. for trial.

But that wasn’t Mueller and Rosenstein’s intent. By timing the Friday indictments on the last business day before the Trump-Putin meeting, these indictments were much more than a publicity stunt. They were an improper attempt to influence what Trump does at the summit.

Whether or not the Democrats had been tipped off by Mueller or Rosenstein, they reacted with near-record speed demanding that the president cancel the Putin meeting.

Shortly after the announcement, Senate Minority Leader Chuckie Schumer said, “President Trump should cancel his meeting with Vladimir Putin until Russia takes demonstrable and transparent steps to prove that they won’t interfere in future elections. Glad-handing with Vladimir Putin on the heels of these indictments would be an insult to our democracy.”

Sen. Mark Warner (D-VA), ranking Dem on the Senate Select Committee on Intelligence, said much the same and just as quickly. Ailing Sen. John McCain (R-AZ) — the New York Times’ favorite Republican — piled on, issuing a statement that said that if Trump weren’t willing to call Putin to account for the election interference, the summit meeting should be canceled.

President Trump, as he should have, refused to cancel the meeting. He said he may challenge Putin on election interference and expects Putin to deny it entirely, as he has done in the past.

The United States has to have a diplomatic relationship with Putin’s Russia. Russia’s influence challenges ours in every nation and region the Russians can reach, so diplomacy can help resolve disputes by means short of war. That relationship has to be at arm’s length and can, as it presently does, include severe economic sanctions against Russia.

On the day the most recent Mueller indictments were publicized, Director of National Intelligence Dan Coats said that the warning lights were blinking red on the foreign — including Russian — attacks on our infrastructure. Coats said that if he were meeting with Putin, he’d deliver a sharp message that we knew the Russians were responsible for a host of the cyberattacks.

Our relationship doesn’t mean that the president should just walk out of the meeting if Putin again denies interfering in our elections. But it does mean that the president should threaten Putin with appropriate responses that go far beyond Mueller’s Potemkin indictments for Russia’s future cyberattacks and interference with our elections. More sanctions are in order.

The president has, unaccountably and illogically, treated Putin with kid gloves since he began his 2016 campaign. That isn’t to say that he’s treated Russia that way. Thanks to Trump, we now have severe economic sanctions on Russia in place.

Is Trump too easy on Putin’s aggression? As I wrote in March, U.S. airpower killed more than two hundred Russian mercenaries trying to cross a bridge near Deir-Ezzor in Syria to attack U.S. allies there. He has severely condemned the alleged Russian poisonings of the Skripals in London with the nerve gas Novichok, which is made in Russia and was probably wielded by Russian FSB agents in that incident. More sanctions should be imposed because of them (and the more recent Novichok poisoning of other civilians in Britain).

Trump criticizes Russia regularly but — with few exceptions such as the Skripal poisoning and Putin’s support for Assad’s chemical attacks — never criticizes Putin by name. That should change, but the augurs for today’s meeting aren’t good.

The biggest topic of today’s meeting will be the war in Syria. National Security Adviser John Bolton said recently that the president wanted Russian help to drive Iran out of Syria. That’s a fatuous idea. Russia and Iran are allies in Syria aiming — so far successfully — to keep the terrorist Assad regime in power and to establish firm footholds in Syria. It’s neither reasonable nor possible for us to expect Russian help in removing Iran’s military presence from Syria.

Israeli Prime Minister Benjamin Netanyahu met with Putin last week seeking similar help. He didn’t get it, and he won’t. Neither will Trump.

Our allies fear that Trump may conclude an agreement with Putin to withdraw U.S. troops from Syria in exchange for some ephemeral promise to help get the Iranians out. It’s possible, given Bolton’s statement, but — we hope — unlikely.

The president came out of last week’s NATO “Hunger Games” in a strong position. By pounding on our NATO allies for their refusal to invest in their own defense, he had a tremendous impact on their complacency. Today, he needs to take equally strong positions with Putin on Syria, election interference, and cyberattacks. Whether he does will determine his credibility with both Putin and NATO.

The Friday indictments publicized by Rod Rosenstein were an attempt to constrain the president’s maneuvers in today’s meeting. If they do, Team Mueller will have succeeded in interfering in our foreign policy to a far higher degree than the Russians did in interfering in the 2016 election.

In the late 18thcentury, Russian Field Marshall Grigory Potemkin, then the most powerful man in Russia, supposedly had constructed several phony villages along the path that his lover, Empress Catherine, would follow in her tour of southern provinces so she could see contented, happy peasants when nearly the entire population of Russia lived in misery and slavery. His name became synonymous with falsity.

Robert Mueller and Rod Rosenstein are earning a similar place in history if not our language.