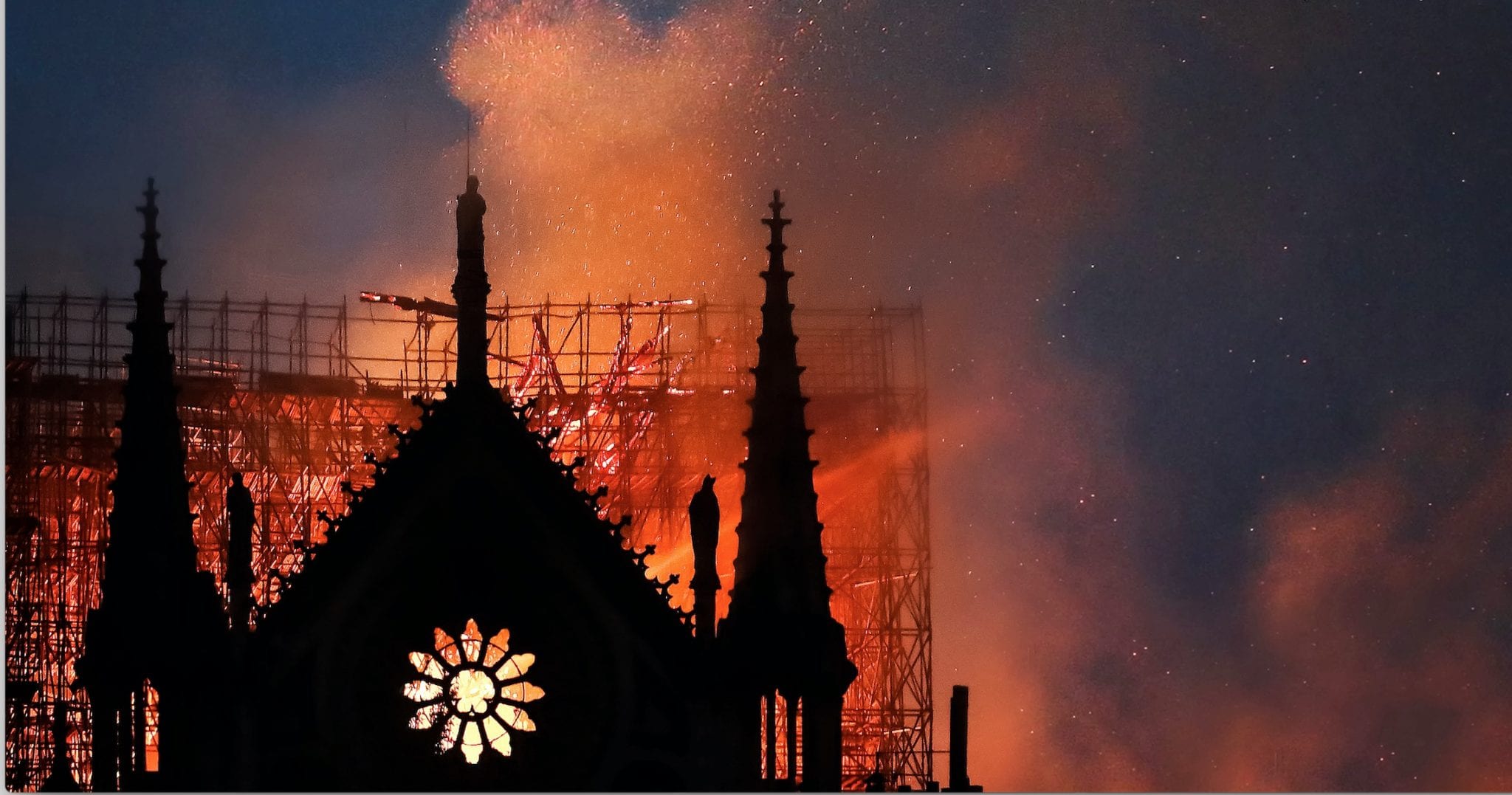 On April 15, 2019, just before 18:20 CEST, a structure fire broke out beneath the roof of Notre-Dame Cathedral, Paris. By the time it was extinguished, some 15 hours later, the building’s spire and most of its roof had been destroyed. Though its upper walls were severely damaged, extensive damage to the interior was prevented by its stone vaulted ceiling, which played a significant role in containing the burning roof as it collapsed. Numerous works of art and other treasures were evacuated early in the emergency; nevertheless, many other masterpieces were damaged or destroyed. The outpouring of grief from around the world when Notre Dame erupted into flames quickly turned into a resolve to rebuild — and by the 18th of April, just three days after the fire started, crowdfunding efforts to help repair the damage had surpassed the $1 billion mark.

On the 21st of April, 2019, a series of coordinated terrorist attacks took place in Sri Lanka. Three Christian churches across the land as well as three luxury hotels in the commercial capital Colombo were targeted in a series of coordinated attacks. At least 321 people were killed, including 39 foreign nationals and three police officers; at least 500 were injured in the bombings. At the time of writing this — April 24 — not a single significant crowdfunding effort exists.

Is this a damning reflection on society?

The answer is a categorical yes.

For over 800 years, Notre Dame has been a symbol of France’s history, both in a literal and metaphorical sense. The eerie construction has served as the scene of major events in history, and as a haven of inestimable heritage. However, even if we exhaust the English language by paying homage to the Gothic structure in a whole host of ways, Notre Dame is just a building. A building of great prestige, I concede. Nevertheless, it is just a building.

In Sri Lanka, people died, hundreds of them, and the world barely blinked. Why?

We live in a consumer culture, one built on a foundation of things.

Our entire economic and social system appears to revolves around the notion of aspirational acquisitions— the idea that a better ‘you’ can be bought. It doesn’t really matter what you buy. It can be a new car or a new coffee machine. Just buy. Don’t have the cash? It doesn’t matter; just stick it on the credit card. Modern society appears to rests on the notion that, no matter what, acquiring things is all that really matters. Eat, sleep, buy, repeat.

Is it an exaggeration to think that millions of us love things — like our smartphones — more than actual people?

I don’t think so. Consumerism is a transcendent religion. Apple and Amazon are the Gods we bow to. By focusing individuals on the deification of consumption, consumer culture fosters narcissistic personalities and behaviors.

Narcissists generally display high levels of arrogance; they are deeply concerned with issues of personal competence, the pursuit of power and prestige, often to compensate for feelings of inner emptiness and diminished self-worth.

The desire for external validation is totally compatible with the idea of materialistic wealth, as both are heavily motivated by the praise of others. In fact, research suggests that materialistic values are fueled by feelings of insecurity. A 2002 study published in the journal Psychology and Marketing found that those who regularly doubt themselves and their own self-worth tend to be more acquisitive.

Consumerism capitalizes on an individual’s insecurities. It leads society down a path that equates purchases with the idea of self- improvement and social mobility. As a dynamic cultural force, consumerism appeals to us at a base level. Want a better life? Want more respect? Want more friends? Well, material possesions can help.

This brings me back to Notre Dame, which was and still is a material possession. State owned, the now badly damaged building is just another thing. A notable thing, but still just a thing. Again, hundreds of people died in Sri Lanka — people, not things. Why are so many quick to lament the loss of a building but not the loss of life?

Sadly, although we view ourselves as distinct individuals, we tend to view the world through the one lens. When a tragedy occurs in a developed and “attractive” country like France, people see this as a serious threat to their lifestyles and values. However, when tragedy strikes in a less “attractive” country, even a tragedy as immense as the one that took place in Sri Lanka, amidst the sighing and virtue signaling, we think to ourselves, “well, this is what happens in a country like ______.” Countries like Iraq, Afghanistan, Syria, Somalia, Venezuela, Pakistan, as well as Sri Lanka, just aren’t as sexy as a country like France. Sadly, this is how many of us view the world, weighing up the cultural significance of a land and its people before deciding how much compassion we should display.

The world in which we inhabit helps foster narcissistic tendencies. Spoiler alert: Narcissism is not compatible with empathy. People who score high on tests for narcissism consistently show deficits in empathy, and vice versa.

Narcissists adore the limelight, and a great tragedy can serve as a canvas onto which they project their narcissism.

Is it just me, or did you also happen to notice the following: shortly after the blaze in Paris, social media was also ablaze with individuals posting photos of themselves standing outside Notre Dame. “So glad to have visited this great place before all was lost,” read one of my friend’s posts on Facebook. Another read, “Notre Dame, forever in my heart. My boyfriend and I visited last year.” The way in which people rush to superimpose themselves on history never fails to surprise me. This was narcissism masquerading as compassion, where people, consciously or unconsciously, used a genuine tragedy to gain social capital.

Yes, but so many people have been to Paris, so many have visited Notre Dame (as evidenced by the amount of photos posted); Sri Lanka, on the other hand… not so much. Really, that’s the logic, or lack thereof, that we are willing to employ?