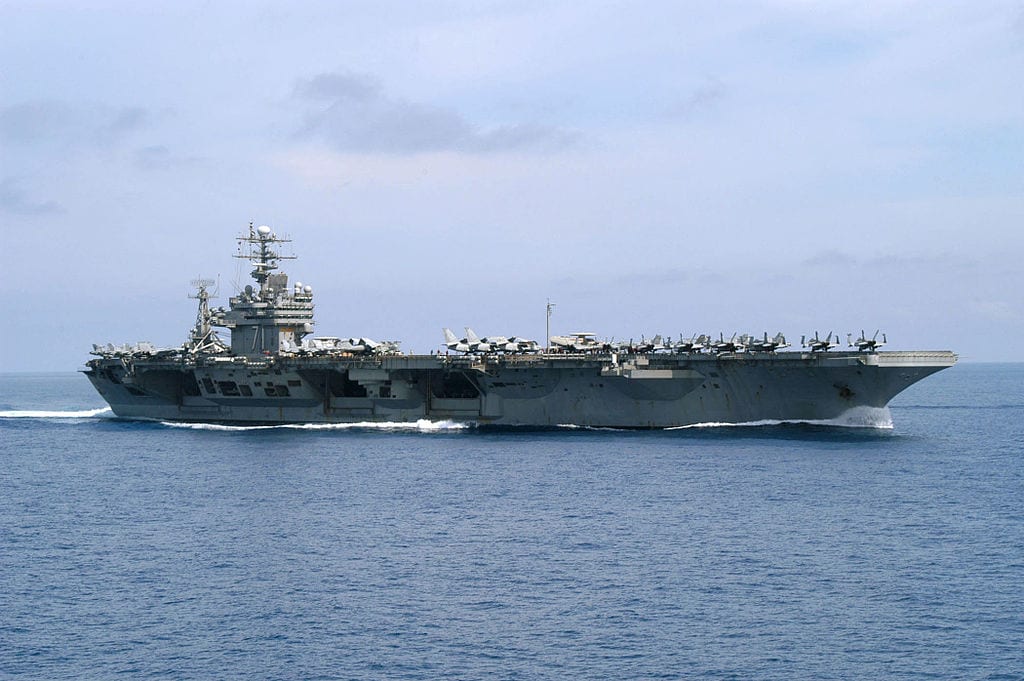 This time it’s different. We’re used to seeing the big dogs come running when disaster hits. Whether it’s a typhoon that devastates part of Indonesia or a hurricane that destroys most of New Orleans, the U.S. military — hospital ships helping the sick and injured, helos operating from aircraft carriers dispensing food and bottled water — meets the challenge.

This time, it’s not just a matter of dispensing aid to the stricken. It’s a matter of preventing the Wuhan coronavirus from infecting so many of our soldiers, sailors, airmen, Marines, and Coasties that the forces become unable to perform all or part of their missions.

So far, the news has been good. We’ve all seen the videos of U.S. Navy hospital ships docking in New York City and Los Angeles to help relieve pressure on the hospitals there. U.S. Army field hospitals have been deployed to New York City and Seattle for the same purpose. The Army Corps of Engineers set up a temporary field hospital in the Javits Center, a huge conference center in New York City. The Air Force is flying protective equipment and COVID-19 test kits around the nation.

We don’t know — and shouldn’t know — how the military itself is suffering from the Wuhan virus. We shouldn’t know because America should not advertise the fact that our military is weakened if that occurs. But sometimes the word gets out. So far, the only evidence we have of the Wuhan virus’ affecting the mission is what happened on the USS Theodore Roosevelt, a Nimitz-class aircraft carrier.

On March 30, Capt. Brett Crozier, commander of the Roosevelt, sent an email letter not just to his boss, but to several higher Navy commanders. The letter, sent from a stop at Guam, said that there were several cases of the COVID-19 virus aboard ship, that the medical personnel and facilities aboard were apparently inadequate to deal with the problem, and that the resulting emergency required that sailors be evacuated to quarantine facilities ashore.

The letter was published by the San Francisco Chronicle on March 31, one day after it was sent. The paper’s report said the letter was confirmed by a senior officer aboard the ship.

On April 2, Crozier was fired from his position and replaced temporarily by a former skipper of the Roosevelt.

That Crozier sent his letter outside the chain of command was unusual, but not the problem. I have friends who are former senior Navy officers. On rare occasions, when they believed their voices weren’t being heard on an extremely important subject, they took the same sort of unusual action without suffering any consequences. But they did it the right way. Crozier didn’t.

Crozier’s letter, according to the statement by acting Navy Secretary Thomas Modly, was sent by a non-secure unclassified email system. Crozier could have sent the letter through a classified system. The information it contained should have been classified at least “secret” if not “top secret.” By choosing to send it via the unclassified system, Crozier essentially guaranteed it would be leaked.

Enough about Crozier. His fate is vastly less important than the fate of the ship and its crew.

A carrier’s crew is usually about 5,000 people and can grow to about 6,000 in wartime. According to the latest Defense Department report, about 1,500 people have been evacuated from Roosevelt and 155 have tested positive for COVID-19. (That amounts to about 42 percent of all reported Navy cases.)

One of my Navy sources, a retired carrier skipper, says that if all hands are working at it, you can disinfect the whole ship in less than a week. With fewer sailors, it’ll take longer. And skilled crewmen — there are no other kind on a carrier — don’t just spring out of the ground. Replacing those evacuated from the Roosevelt will take days or weeks.

In short, it’ll be weeks or months before the Roosevelt is ready to go back to sea to perform its mission. We have 10 aircraft carriers like Roosevelt, each usually going through a 32-month service to maintenance cycle, which means, roughly, that two are in a shipyard while the other eight are at sea or in port.

Were we in a shooting war, the Roosevelt’s unavailability would leave a big hole. Were other ships in the same situation, that could affect the outcome of a war.

The other services face the same problem in different ways. A typical Air Force fighter squadron has about 20 aircraft. It won’t take many sick pilots before the squadron can’t operate.

There’s no “social distancing” on a ship, in a barracks, or among the crews of the many aircraft that have more than one person flying it.

Military duties — on ship, shore, or in the air — are literally “hands on” affairs.

I remember from my brief stay on an aircraft carrier more than a decade ago the hundreds of “ladders” — steep staircases you have to climb or descend to get anywhere — and everyone uses the handrails. Dozens or hundreds of people have to touch the aircraft, fuel lines, computer keyboards, communications, and weather equipment and such to make a ship run.

On bases ashore, the problem is perhaps more manageable. Training is being limited, military exercises have been suspended, base activities have been limited or shut down, and, in some cases, bringing in new recruits has also reportedly been suspended. But the services aren’t and can’t be ordered to stand down entirely.

The military’s mission of defending the nation is paramount and will be performed. But, as I have written many times, you can’t do more with less. You can only do less. The more people who become infected in the pandemic, the fewer will be able to perform their duties.

The Defense Department is constantly revising the means it uses to deal both internally and externally with the pandemic. Last Monday, the Pentagon reported 1,067 cases, of which 569 were among the troops. Last week, Air Force Gen. Tod Walters said that the Pentagon is preparing worst-case scenarios and, naturally, keeping them secret. Now, when there is no proven vaccine or treatment for COVID-19, our forces remain vulnerable to it. But so do our adversaries’ forces.

Former Defense Secretary Donald Rumsfeld was fond of saying that weakness is provocative. If any adversary decides that the weakness of our armed forces is sufficient for them to engage in aggression, it will do so. The ability of our forces to respond with military action will depend on how much our forces are depleted by the pandemic.

Iran, China, and Russia are suffering greatly from the pandemic. But that won’t deter them from seizing opportunities they decide are too great to miss. Terrorist networks are probably more likely to misjudge the pandemic’s effect on the U.S. military.

President Trump said that the next two weeks will be the worst for the nation. The peak of the pandemic in the U.S. may occur in that time or some weeks later. Meanwhile, all we can do is to remain watchful and trust our medical scientists to develop vaccines and treatments for COVID-19 as quickly as possible.