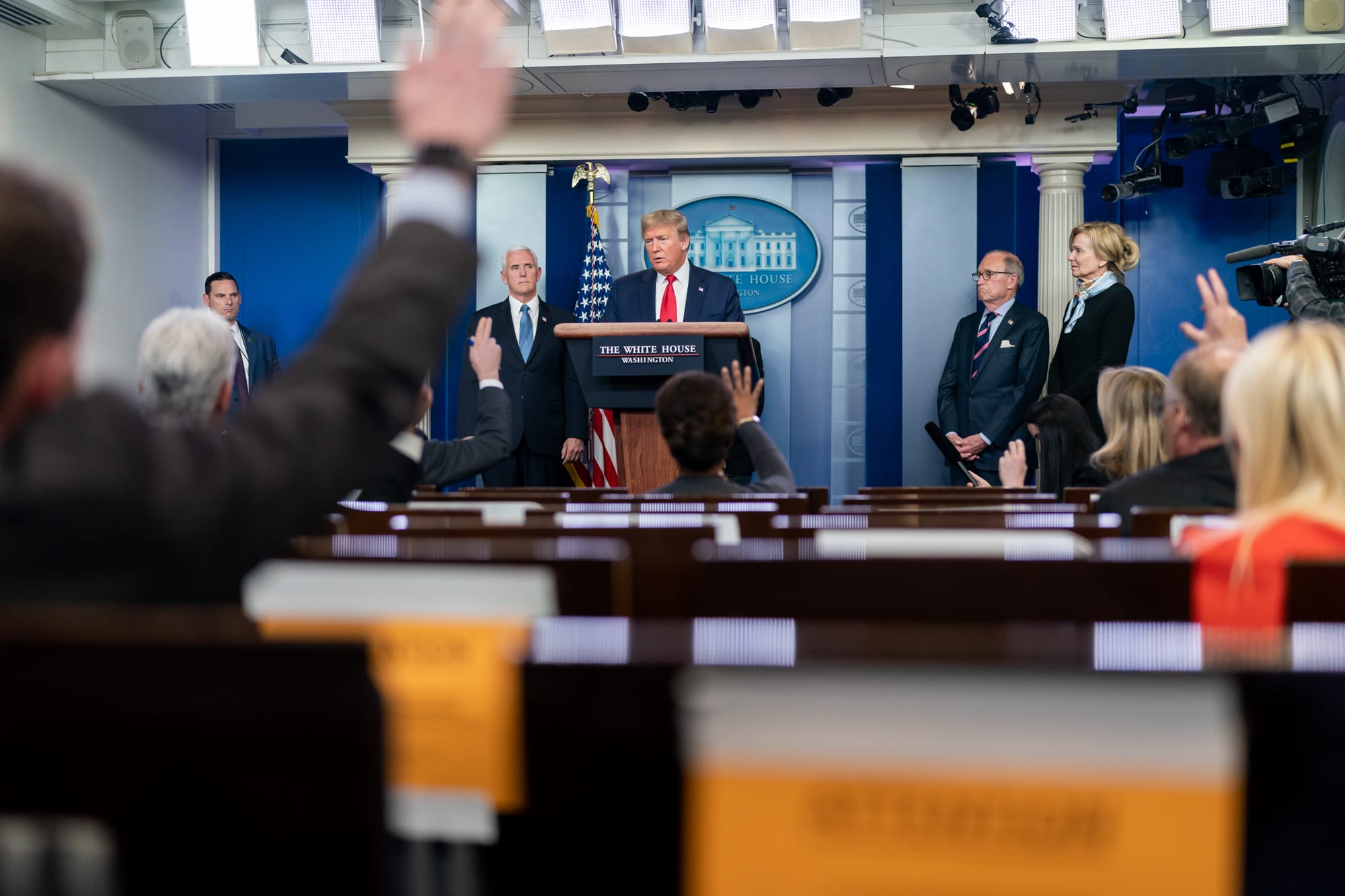 It’s been five weeks since I first wrote about the impact of the coronavirus in my life and community. When I started writing, my state had just discovered 100 new cases in a single day. That was a big deal. Today the United States reported 25,000 new cases and 1,800 deaths. When I started writing, I was in a unique position, living only a few miles from the beginning of the crisis. Now all Americans are together in this, forced to stay at home, losing jobs and businesses, while we wait and hope.

Since this time last month, I’ve seen something of a flash evolution in my own attitudes as I’ve tried to find ways to help. I had been volunteering at a food bank until our state shut down those volunteer outlets, supplanting citizen efforts with National Guard soldiers. I’ve been looking for other ways to help, but they are thin on the ground.

The crisis has transformed me. My online presence is typically cynical, sarcastic, esoteric, and partisan, punctuated with what I imagine to be clever turns of phrase or jabs at the all-too-frequent failings of whichever politician or ideology happens to be the focus on a given day. I’ve all but entirely eschewed that.

We need to rely on the expertise of others to help guide both our understanding of what is happening and our decision-making moving forward.

Instead I try to find ways to help people understand what is happening. Partisan assumptions have been jettisoned; I assume honesty and good faith from everyone until proven otherwise. We are all in this together, and getting in a good poke for the sake of my ego or a quick laugh suddenly seems like a tragic waste of time and resources. There is so much to do, so much to understand. There are disease models, medications, hospital capacity concerns, testing details and availability, viral evolutionary history, infection curves. This is an event that impacts the lives of every human being on the planet, and understanding it requires expertise in a dozen different medical or academic fields.

It’s impossible to be an expert in all these things. We need to rely on the expertise of others to help guide both our understanding of what is happening and our decision-making moving forward. We need wisdom from trusted sources. I spend much more of my time talking privately with people I know to be experts. I ask questions and try to break complex concepts into things I can understand and subsequently communicate.

Ideally, we would have institutions that operate this way, collecting information from deep experts and helping educate both the public and policymakers. But the events of the last three months have finally broken the public trust in institutional sources. The examples are numerous and exhausting to recount. The Centers for Disease Control and Prevention (CDC) provide many of these mistakes, from their initial guidance against wearing masks to their inexcusable bungling of early-stage testing that could have prepared the country during the first crucial weeks.

But it’s the World Health Organization that has become the most inexcusable example of how elitist arrogance can manage to maintain an attitude of sneering disdain toward the people they need to convince even while being wrong about everything. They proclaimed in January at the prodding of the Chinese government that COVID-19 could not be transferred from human to human, now a laughably absurd claim. They led the charge against the use of face masks in the general population, a practice that would have almost certainly slowed the spread of this pandemic.

Most embarrassing, though, has been the behavior of so many in our journalistic and pundit class. In early January, when the first hints appeared that COVID-19 might be a problem, article after article was dutifully published on how the coronavirus was less dangerous than it seemed and how the real danger was from the anti-Asian bigotry this would inspire. Written by authors with impressive credentials but little functional knowledge, the articles lectured on the important topics of racism, public health priorities, and how we simpletons could possibly be so absurd and ignorant as to believe that masks would help slow the spread of this pandemic.

Weeks later, they would change their minds, not because of any investigation, careful thought, or discovery on their part, but because they were told to. Our courageous truth-tellers are, in fact, nothing more than florid stenographers for the institutional perspective. They can write in a way that entertains and mimics original thought, but their thoughts are not their own. They are merely regurgitating the opinions fed to them. They rewrite press releases in a conversational tone and then cast themselves as the smartest kids in the room. They lack the expertise to thoughtfully interrogate the veracity of anything more complicated than a baking soda volcano; the details of a worldwide pandemic have left them miles out of their depth.

Never in my life have I see the members of the pundit class so quickly and obviously proven wrong. These last few months have exposed the frauds with alarming speed.

This crisis has managed to strip away all but the most important things in our lives. When I write, when I go out, when I talk to my friends or do a Zoom meeting with my church group, I try to keep a few things in the front of my mind. I want everything I say and do to serve one of these ends:

I think about these questions a lot. I’m very cautious because I know how bad this can get, and I worry that someone might read what I say, make it a part of their deep hope about when and how this will end, and then have that hope shattered. In this national emergency, every inch of hope is important, every shed of understanding brings us closer to saving lives and effectively ending lockdowns. I assume (perhaps pompously) that what I say has meaning, that people will take my words as truth, and that there will be consequences if I am wrong.

It is clear to me now that this is not a common anxiety in the press and pundit class. Everything around us has changed. We need every fact triple-checked, we need to stop when we are uncertain, we need to couch our expectations, and we need to be cautious in our predictions, wary of change, and protective of hope. Anyone who is in the business of spreading information needs to stop and ask the questions above before they publish anything. Whom does this help? Why is it important? Does it bring clarity and value to the people we are trying to help? Or does it sow fear, anxiety, and hate?

Never in my life have I see the members of the pundit class so quickly and obviously proven wrong.

The press rarely asks themselves these kind of questions. To the contrary, not a day goes by that some half-truth or poorly understood and subsequently misinterpreted study is blasted from the highest levels of our media landscape. The news is filled with stories about Trump saying “Chinese virus” or absurd claims that Trump could profit off a potential cure or unsubstantiated allegations that the administration is only sending aid to red states. It has gotten so bad that I’ve stopped assuming anything is true and started asking a series of important questions of every piece of information I see online: What is the intent of this? What does the author want us to believe? Where is he or she going with this? What are they trying to accomplish with this story? Is it one of the four goals I listed above? Or is it something else entirely?

When I ask these questions, I get a lot of pushback from people who think that asking about an author’s intent means I’m assuming ill intent. In truth, I’m genuinely trying to figure out what is in the minds of the authors. I got a good hint when a reporter friend took me to task for questioning the intent of a particular article. After a lot of back-and-forth, I realized that his position is that the press needs to push back against what Trump says, an extension of the laudable “speak truth to power” mantra to which many journalists subscribe.

This reflexive opposition to President Trump means that the press has placed itself in a curious echo chamber with him. When he says something, almost literally anything, they feel that they need to correct it. If Trump is preaching hope, they need to correct it with despair. If Trump says this virus came from China, they have to say that it came from Europe. If Trump promotes the use of hydroxychloroquine, they feel the need to report that a man died from taking it or that pharmacies are running out or that some anecdotal evidence says it doesn’t work even as they report that there is anecdotal evidence that it does work. Their primary position seems to be little more than a direct opposition to whatever Trump is on about at any given time.

The problem with this is that the world exists beyond the White House press room. The press has long touted themselves as “explainers,” but this crisis has shown how poorly they can deal with any events or topic that involves uncertainty or complexity. They can report the results of a model, but they don’t have enough expertise to understand the model. They can report on the number of positive cases or deaths, but they don’t know how those numbers came to be. They look six inches into a topic but lack the vocabulary and foundation to ask any interesting or probing questions about that topic. The result is isolated factoids reported as stories, misinterpreted data published as settled science, and policy recommendations that lack any deep understanding of what is going on or how to resolve it.

The coronavirus crisis has exposed everyone. The people who were always generous became more generous. Those who were always curious became more curious. Those who never had anything to offer but criticism collapsed into their critical natures. And we got to discover that many who posed as experts never really had any foundation for that. They donned the expertise of others without any of the knowledge or critical thought. We’ve all become who we always were.