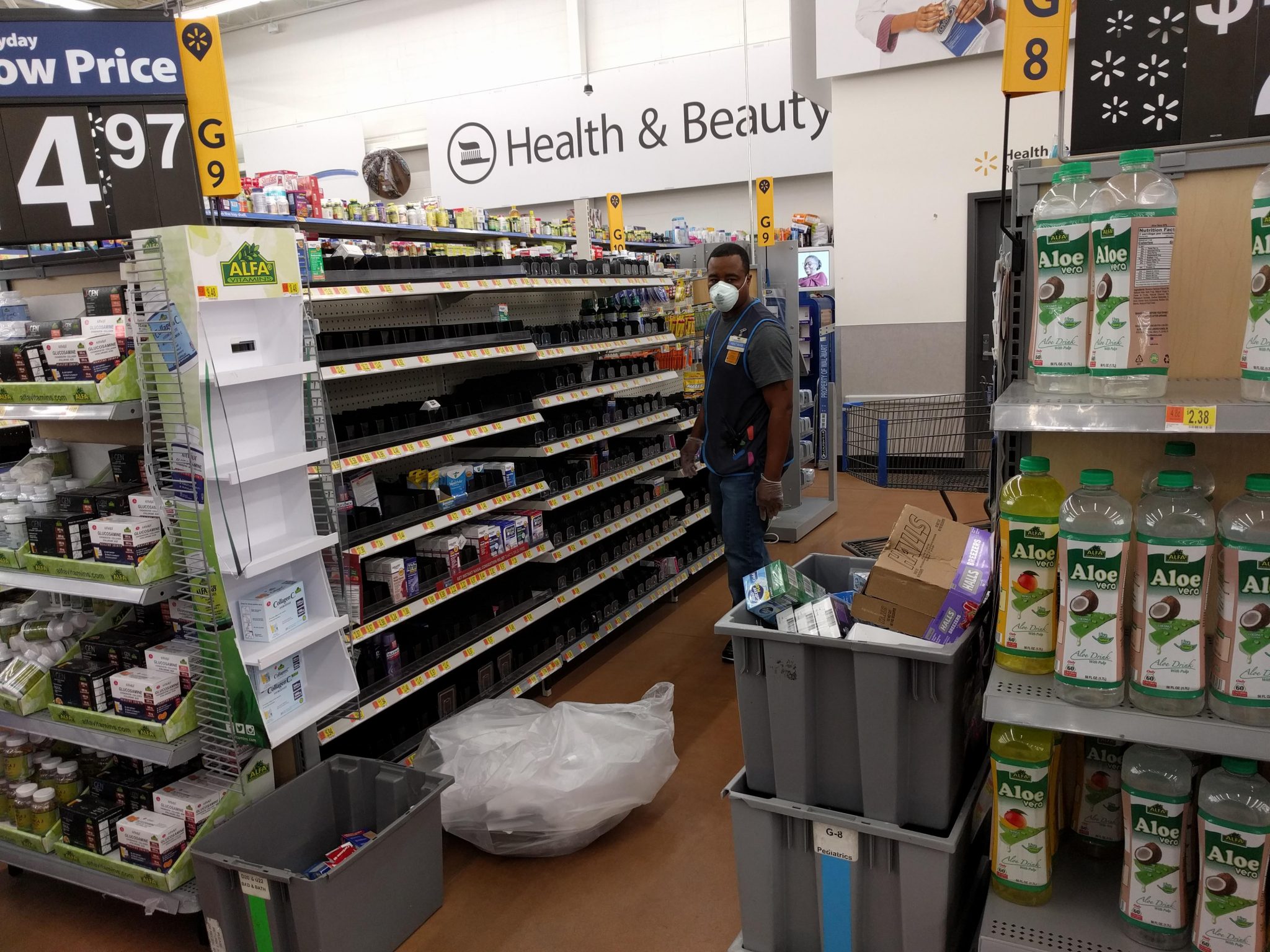 I used to like driving well over the speed limit.

I grew up well outside Atlanta, and the posted speeds never represented the practiced reality, even on the most remote cow-trail roads winding through the woods. I always went faster than officially permitted, maybe faster than was safe. But moving to Seattle broke me of that habit. The traffic here is too congested, even on the weekends. You can’t beat the speed limit without endangering others around you.

This thought occurred to me as I reluctantly pushed 75 on the 405, white-knuckling it as I headed toward my volunteer shift at the food bank. This stretch of road that usually holds me somewhere between 45 and zero miles per hour has become a racetrack. I’m flying down the highway, just trying to keep up with the flow of traffic at a speed that would, in normal times, earn me an easy ticket.

That’s how everything feels now. We’re all hurtling down the road much faster than we would like, but it’s either that or get run over. I’m tired of hearing the phrase “uncharted territory” because at least in uncharted territory you can pull your canoe over, take a day off, and try to sort through your bearings. We’re in uncharted territory on class-three rapids with a tribe of hyperintelligent axe-wielding bears chasing us.

We’re all hurtling down the road much faster than we would like, but it’s either that or get run over.

Humor is important right now because things in the immediate future are so grim. I first wrote about the coronavirus in The American Spectator three weeks ago (March 11) when Seattle was considered ground zero with over 250 confirmed cases. We confirmed 100 new cases in a single day, and that was a big deal. On March 29, the U.S. confirmed 21,000 new cases and almost 500 deaths. Everyone who is watching carefully knows this week is going to be bad in a way we’ve never seen.

The nature of this pandemic means that a lot of what is going to happen is already baked in. The New Yorkers who will be in the hospital in respiratory distress tomorrow didn’t contract this thing today. They got it two weeks ago, before schools had closed, when people were still out for the weekend dancing and filling the restaurants, when the mayor was still going to the gym. There’s nothing we can do but prepare ourselves for the consequences of decisions already made.

This week may very well be the worst one because of the nature of the coronavirus incubation period and the impatience of our modern culture. Many of us have been effectively quarantined for two or three weeks already, and we’re feeling the social, psychological, and economic effects of that. It is exhausting, and we want to know that it’s working. But we can’t know that just yet. We need to trust that it’s working even as we see the bad news rolling in this week. We hope we’ll see the effects of our sacrifice translate into reduced cases. We trust that we’re making a difference, but that faith needs to manifest itself as evidence fairly soon or morale will go downhill quickly.

While we watch and wait, the world is changing under our feet. I’ve seen people describe this as a Black Swan event, an event of exceedingly low probability that carries extreme impact and realigns how we view the world. I think that is understating it. This is a Zebra Swan event, where we are out here looking for the elusive black swan, but then we see a black-and-white striped swan flying upside down and we have to take a step backward but it turns out we’re not in a boat watching swans; we’re in Death Valley and it’s hailing. This changes so much about what we even think is going on in the world that we’re going to end up reevaluating basic cultural and social assumptions.

A close friend of mine is a supply chain expert for a very large company that has a very impressive supply chain, and he has planted far too much doubt into my mind. His observation is that we’ve taken this pandemic, an event clearly unique in the last 100 years (or more!), and layered upon it an economic event without precedent. “What happens when the world stands still for four weeks?” he asks. The simple and terrifying answer is that we don’t know. My friend noted that his company has been listed as an “essential business,” but very few of their suppliers have received that designation. He is cautiously nervous about watching as an “essential” retailer slowly runs out of stuff because the businesses who make the stuff aren’t “essential.”

We have companies working overtime to make ventilators, and we all agree that those businesses are essential. But ventilators require plastic tubing, and how much stock does the plastic tubing company have on hand? The truck drivers are working overtime, but are the mechanics still open? Do they have enough of the right parts? Are those parts made by essential businesses? How much stock do they have? We’ve already seen truck drivers stress that they have fewer options to stop, or they can’t socialize during their day, or it’s harder to find food on the road. They are heroes, but there are limits, and we don’t know what those limits are.

I begin to wonder if this is the next stage of this crisis. The first stage was exponentially increasing contagion with the threat of grave illness and death. The second stage was massive economic shock as we shut down enormous “nonessential” segments of our economy. But there’s always been the assumption in that second stage: money isn’t worth lives. This is true, of course, but it’s an incomplete thought. Too many people seem to look at the economy as an endless paper-shuffling exercise that can be indefinitely suspended if we give people enough money to make rent.

But that’s not true. I’m not worried about running out of bread; I’m sure some bureaucrat or economic consultant had enough common sense to make sure that the wheat supply chain was labeled “essential business,” and the flow of flour will continue uninterrupted. But what happens if we run out of plastic bags to put the bread in? What happens if we run out of twist-ties to close the bags? Things that are very small and so cheap that they seem worthless become very important when you run out of them. We have a central authority that decided our invisible hand only needs one thumb and a forefinger up to the second knuckle, and I’m not confident they’ve covered all contingencies.

The crisis here is no longer just the infection. It’s the infection, the economic devastation, and the potential dissolution of some of the basic assumptions we use to orient our lives.

In fact, none of the self-proclaimed experts seem to have thought much past the next three days at any point in this crisis. They crow that the U.S. has the most positive cases of any country in the world: “He did promise ‘America First,’ ” exclaims a former presidential candidate, and “Who is the shithole country now?” taunts a popular GQ journalist. But while they scoff and scorn and tweet from the safety of their work-from-home jobs, every day I hear from someone working an on-the-ground job that needs to continue, and every day is a new insight.

A New York Times-bestselling data expert says the smart people are looking 10 days into the future but seems oblivious to any of the things I’ve mentioned here, but the rando in my messages works at a medical device company and talks about how the assemblers are worried about working too close together. Everyone in the knowledge class has taken it as a given that the people who make things, move things, and stock things are barely a step up from robots and not real people who are making difficult choices and sacrifices to keep the gears of economic necessity turning.

A lot of things that aren’t “essential” over two weeks become essential over two months. The idea niggles in the back of my head that, just like we don’t see the severity of an outbreak until it’s too late to stop it, we won’t see the gaps in our supply chain until it is too late to mend them. The crisis here is no longer just the infection. It’s the infection, the economic devastation, and the potential dissolution of some of the basic assumptions we use to orient our lives. The assumption that “I can mostly go out whenever I want and buy whatever I need” is still in place in Seattle. But the civilizational scaffolding that buttresses that assumption is more brittle that we know. There are a lot of moving parts to a fully functioning society of plenty, and we can’t just freeze half of the gears and assume things will continue to operate indefinitely.

That is why I’m on this highway, hurtling down the road to an unassuming warehouse next to the FedEx shipment center. Our local food bank delivers 6,000 meals a day but needs volunteers for the bulk of the work. It’s a gear that must keep turning or people go hungry. But the food bank relies on regular, weekly or monthly corporate and church volunteer efforts, and those gears have frozen solid. So now we pick up that slack even though it means we can’t be six feet away from each other. That’s the choice we have: violate the quarantine or people go hungry.

There are a lot of these choices coming our way in the next few weeks. Don’t let anyone tell you differently or deny that these choices will be necessary.