by Itxu Díaz
Working out in Madrid, Spain, March 23, 2020 (Rusky/Shutterstock.com) 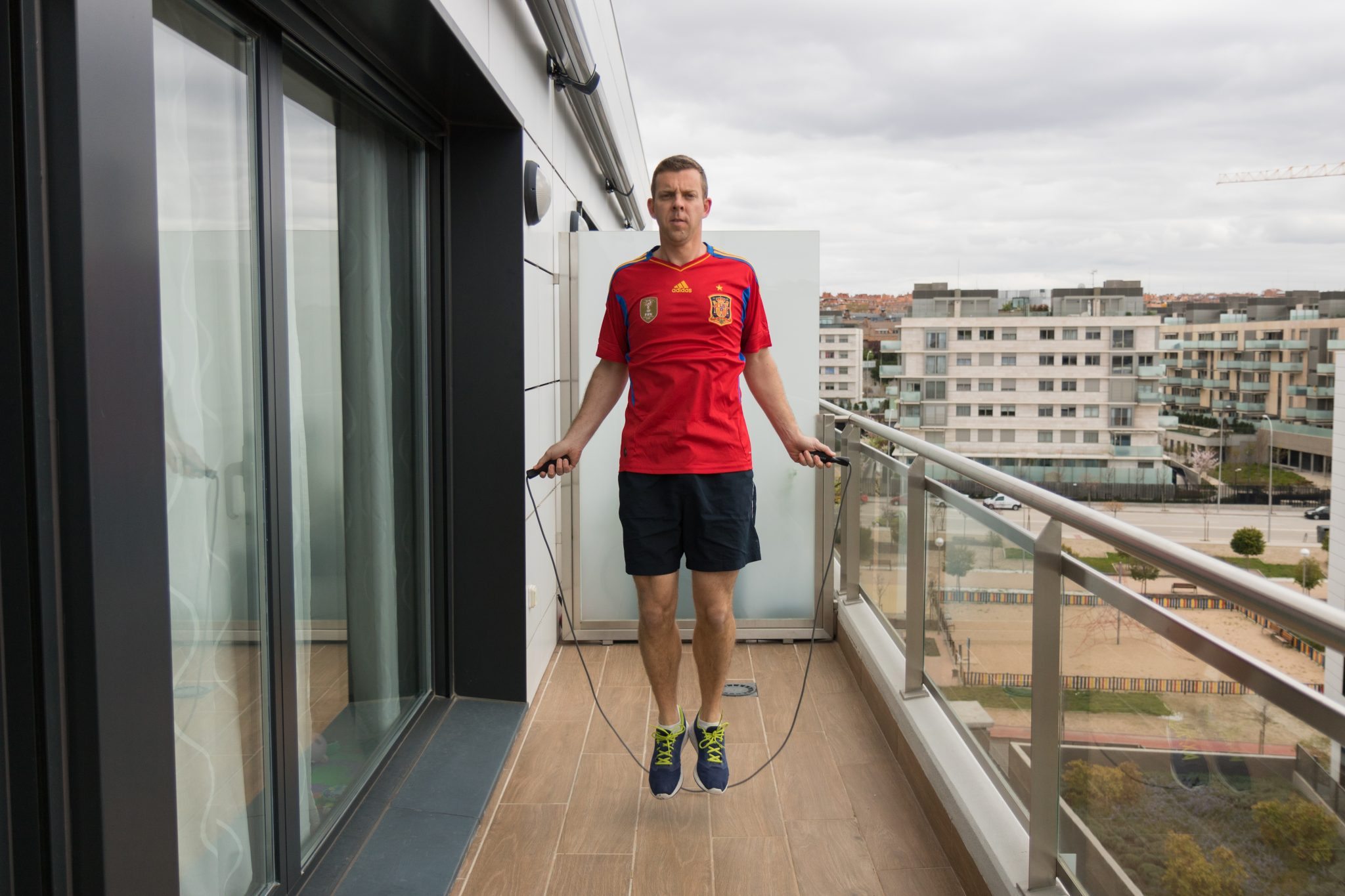 I’m so bored, I spent the morning going around the house breaking light bulbs with a hammer, just so I’d have something to fix. Then I took the ladder out and spent two hours replacing them, cursing the spiteful bastard who had smashed them. I set out to complete a thousand tasks these days, those ones that you never have time to do during the football season, but with so much household damage it’s impossible. House maintenance is difficult on its own. But keeping a house spic and span with a guy with nothing to do in it is mission impossible. It’s inevitable. Men move, jump, howl, bump into things, bite where they shouldn’t, and play with light switches until sparks fly.

Man is a restless animal. Nothing new here. Back when we lived in caves, prehistoric man went hunting because their women would beg them to go outside and catch some g*dd*m air. All we did was change the playing field. Back at home we would be shooting arrows at apples. Outside, we found it was more fun to use moving targets. So we discovered how much fun chasing a mammoth through the jungle could be, showering it with arrows up to the edge of the forest. Then once the poor animal was dead, we found the effort had made us hungry, and so we tried to eat it. Cavemen never had to deal with today’s idea of “going shopping.” That was purely accidental.

It was also restlessness that led man to invent the bongos, which we later used to communicate with the rest of our herd from the forest. A strong beat meant “I am hunting,” two beats meant “I am returning,” five beats meant “I have caught something really big,” and a very, very soft beat meant “pour me one for the road, I’ve got to get back to the missus.”

All of this is just to justify my own concerns, which are now shared with so many of my fellow countrymen. These days of confinement, there’s a certain obsession with staying active. And there’s a certain obsession with home training sessions. Today I went out on the balcony to do some pushups, and within 10 minutes all the neighbors in the six surrounding buildings started to copy me. All this activity has given the “big-boned” elderly guy on the balcony in front a pulled hamstring. I think we were all a little worried as we saw him emerging onto the balcony, ready to give it his all, dressed with his Y-fronts and a wife-beater vest.

We could almost hear his hamstring snap. First he went stiff, hands at his side, then he shot straight up, and finally collapsed in a sort of rigor mortis but without the mortis, face down on the tiles, like a grebe performing his courtship ritual, gifting with us a noble song of swear words and colorful expletives.

The neighborhood is like a tight-knit family these days. It didn’t take them long to react. The guy on the sixth floor, whose brother-in-law is a doctor, diagnosed him six floors away, and in a show of heroic professionalism, shouted down to him, “You ought to pay a visit to the workshop, mate!” The lady on the seventh floor, whose sister is a vet, also came to his aid, proving that confinement is making us better people, although not necessarily better communicators: “Face sideways, and point your truffle north!” Then the guy on the first floor joined in, with the finesse of an anvil: “Manolo, stay in porn position!” The gentleman from the fifth floor, alarmed by this last indication, limited himself to making a moral judgment: “How shocking!” And finally the intellectual on the second floor appeared, clearing up the misunderstanding: “The guy on the first floor meant to say prone position!”

Our patient has no idea what the prone position is, and, judging by the steady cursing of all his neighbors and their mommas, I don’t think he was too inclined to figure it out. I weighed in, throwing a box of Band-Aids at the wounded man, and headed off to the shower whistling the tune to The Fresh Prince of Bel-Air. We call the guy with the pulled hamstring “Uncle Phil,” but only when he’s not listening. For example, when he’s lying prone but doesn’t know it.