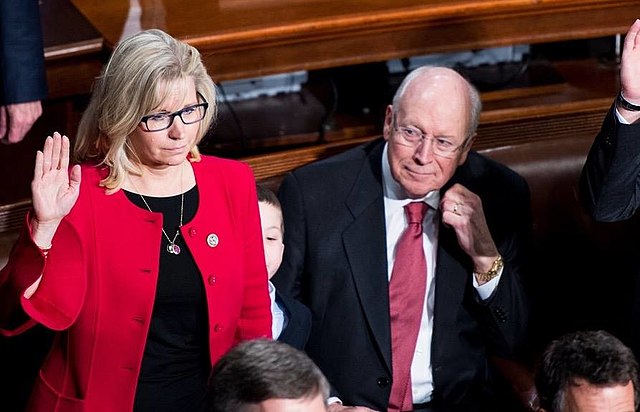 As an example of just how far off the rails House Republican Conference Chair and Wyoming Republican Congresswoman Liz Cheney has gone, look no further than both her recent Washington Post op-ed and stories about her behind-the-scenes post-election skullduggery involving the politicization of the U.S. military.

The op-ed was titled,

Liz Cheney: The GOP is at a turning point. History is watching us.

In it, Cheney opens by repeating the flat-out untruth, as I have mentioned earlier in The American Spectator, that the Trump January 6 rally at the White House “provoked violence.” As I noted, “I was privileged to have a literal front-row seat at that White House rally. The president’s call to protest ‘peacefully and patriotically’ did not qualify as anything close to inciting insurrection.”
Next, Cheney repeats the Really Big Lie that the 2020 election was on the up-and-up. One need go no further than my home state of Pennsylvania and this reality check from Judicial Watch’s Tom Fitton. Said Fitton — accurately:

From the court case brought forward by the Trump campaign it would appear that “600k mail in ballots, or ballots generally, were counted in Pennsylvania without the required observation by the Trump campaign. The law requires that both sides have the right to observe the ballot counting.”

In fact, my own Pennsylvania congressman, Scott Perry, immediately realized the game that appears to have been at play in the ballot counting taking place at the huge Philadelphia Convention Center. Breitbart reported Perry’s remarks as follows:

“This is a convention center that is just massive,” Perry said on SiriusXM’s Breitbart News Daily with host Alex Marlow. “The [poll] watchers were put all at one end.… So you can’t see anything. It’d be like watching a play on a football field [where] you’re standing on one end zone and the play is happening on the other end zone and you’re supposed to make the call. Keep in mind the things they’re watching for are removal of the inner envelope on the mail-in ballot. That inner envelope has to be there, or the ballot is not valid.”

“You can’t see that from six feet away, and you certainly can’t see it from thousands of feet away, yet that’s what occurred in Philadelphia,” Perry remarked.

Perry added, “If you’re standing on one end zone, how can you see what’s happening on the other end zone? The Philadelphia Convention Center is a massive building, and that they let [poll watchers] in the door, but that’s essentially it. Functionally, you’re not observing anything.”

And from Liz Cheney? This: “The Republican Party is at a turning point, and Republicans must decide whether we are going to choose truth and fidelity to the Constitution.”

Say what? Hello? Congresswoman, with all due respect, what was going on at the Philadelphia Convention Center in the vote-counting process was neither true nor in fidelity to the Constitution. And that doesn’t even touch “the voting procedures imposed by Democrats in Pennsylvania [that] are in violation of the Pennsylvania state constitution.”

Yet there is Liz Cheney, deliberately and willfully turning the truth about what happened in Pennsylvania upside down and inside out to make the truth a lie.

Again, there is nothing — absolutely nothing — about Cheney ignoring election shenanigans in Pennsylvania — on top of ignoring a patently obvious violation of the Pennsylvania constitution — that is either conservative or displays a “reverence for the rule of law.” By her own standards, Liz Cheney is displaying a flagrant opposition to having that “reverence for the rule of law.”

Then Rep. Cheney says this: “The question before us now is whether we will join Trump’s crusade to delegitimize and undo the legal outcome of the 2020 election, with all the consequences that might have.”

The questions swirling around the legitimacy and legal outcome of the election in Pennsylvania and elsewhere are not because of Donald Trump but because of the manner, method, and process in which the election was conducted. The fact that Liz Cheney refuses to oppose voter fraud and the rest is the real threat to democracy.

And a second, shocking example of Cheney’s elitist, anti-democratic instincts was this bombshell, as headlined by the New York Post:

This jewel of a story reported this:

House Republican Conference Chair Liz Cheney (R-Wyo.) — who is facing possible ouster from her leadership position next week — quietly orchestrated a Washington Post op-ed by 10 living former defense secretaries cautioning that then-President Trump might attempt to politicize the military, according to a report.

“She was the one who generated it, because she was so worried about what Trump might do,” Eric Edelman, a friend of Cheney’s and former adviser to her father, told the New Yorker. “It speaks to the degree that she was concerned about the threat to our democracy that Trump represented.”

In other words, Cheney was not only deliberately ignoring the unconstitutional, anti-democratic manipulation of the election. She was herself covertly organizing a Seven Days in May–style attempt with ex-secretaries of defense and the Washington Post to politicize the U.S. military.

As Paul Craig Roberts, the former Reagan-era assistant secretary of the treasury and current chairman of the Institute for Political Economy, has said, “The American elite no longer believe in democracy.… Democracy is in the way of elite agendas. Indeed, the reason the elite despise Trump is that he bases himself in the people.”

There could be no more vivid personification of that elite that despises Donald Trump and the millions of Americans who support him than Liz Cheney.

This week, Republicans in the House will make the decision of whether they will side with the Cheney-style elites or the base of millions of Americans who have had it with the anti-democratic elite, which has infected not only the media and the Democratic Party but certain quarters of the GOP as well.