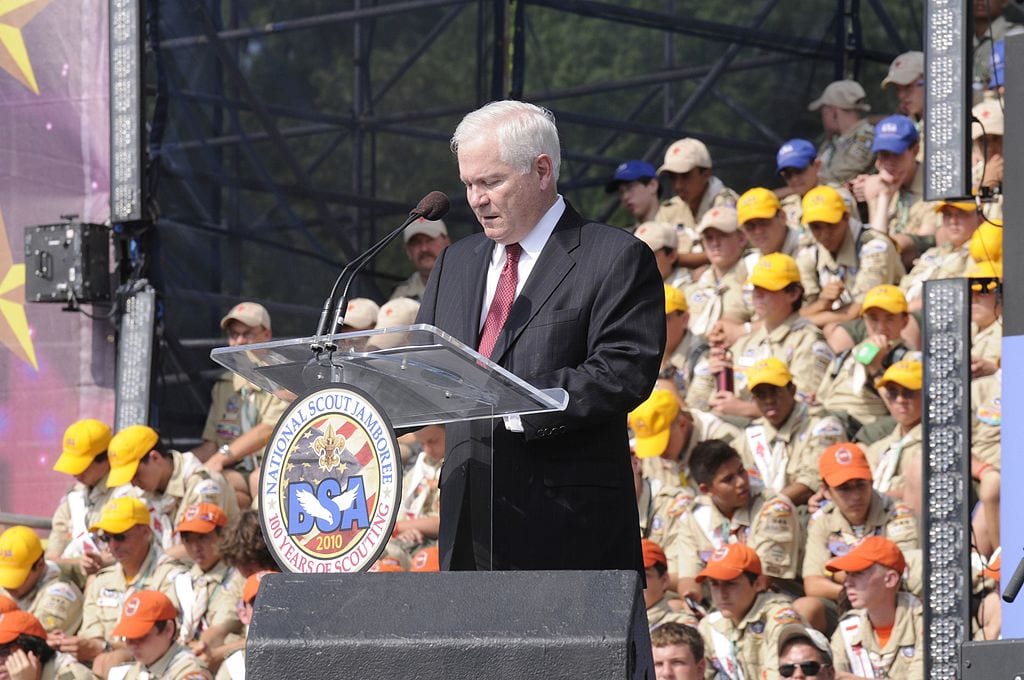 The other day President Trump called Rex Tillerson “dumb as a rock.” That was payback for an interview in which his former Secretary of State called Trump undisciplined and a poor study. Trump had selected Tillerson for the job based in part on the recommendation of Robert Gates, Obama’s Secretary of Defense, according to press reports. Gates and Tillerson knew each other largely from the Boy Scouts, where they both held leadership positions during its transition from a traditional organization to a politically correct one.

As president of the Boy Scouts, Gates had endorsed the adoption of the LGBT agenda, urging the organization to succumb to the demands of its critics. He cast adherence to Christian principles, not their betrayal, as the real threat to the organization’s future.

“The status quo in our movement’s membership standards cannot be sustained,” he said. Don’t resist “the social, political and judicial changes taking place in our country,” he argued. Shamefully, Gates presented his counsel of capitulation under the guise of dutifulness, putting a perverse spin on the Boy Scouts code: “Our oath calls upon us to do our duty to God and country. The country is changing, and we are increasingly at odds with the legal landscape at both the state and federal levels. And, as a movement, we find ourselves with a policy more than a few of our church sponsors reject, thus placing Scouting between a boy and his church.”

Tillerson, who served as president of the Boy Scouts a couple of years before Gates, laid the groundwork for this capitulation. He said that embracing the new PC morality would allow the Boy Scouts to “serve more youth.”

What did it profit the Boy Scouts to gain the PC world and lose its soul? Judges may have to put a figure on it. According to press reports this week, the Boy Scouts organization, reeling from costly homosexual abuse lawsuits, is “considering” bankruptcy. Adding to its woes is that membership has “dwindled.”

Gates and Tillerson had dressed up their pandering as a “survival strategy.” They, in fact, had set the Boy Scouts on the path to dissolution. Its policies grow more incoherent with each passing year (it has gone transgender and now accepts girls), alienating parents and religious groups. According to the Wall Street Journal, the Mormons, one of its largest sponsors, are abandoning it, and the organization’s growing maze of gay lawsuits makes it look about as reassuringly safe as an episcopal beach house.

The Catholic Church and the Boy Scouts are keeping law firms and insurance companies very busy.

“The Boy Scouts have been at the center of sexual-abuse scandals in the past, and the organization is facing a number of lawsuits that allege inappropriate conduct by employees or volunteers in incidents dating back as far as the 1960s,” reports the Journal. “Filing for bankruptcy would stop the litigation and would give the nonprofit a chance to negotiate with those who have sued. Other organizations facing similar legal pressure have also turned to bankruptcy protection in recent years. More than 20 Catholic dioceses and religious orders have filed for chapter 11 protection…”

And it is clear that many more lawsuits are on the way in the wake of the organization’s adoption of lower moral standards. As the Boy Scouts’ annual report gingerly puts it, the organization anticipates “expanded litigation.” As its moral standards fall, its legal fees go up. The Journal notes that in “recent years, the Boy Scouts group’s legal bills for work done by some outside law firms have grown. In 2017, the organization paid $7.6 million to labor and employment law firm Ogletree Deakins, according to public filings. It paid Ogletree $3.5 million in 2016 and $859,347 in 2015, the filings show.”

As once-great institutions teeter under the weight of failed liberalism, you would have to be dumb as a rock to stake their “survival” on even more of it. And yet that is often the counsel given by everyone from Gates and Tillerson to Pope Francis and his hapless bishops. If history has taught us anything, it is that liberalism is not an agent of expansion but an acid that burns through everything it touches.