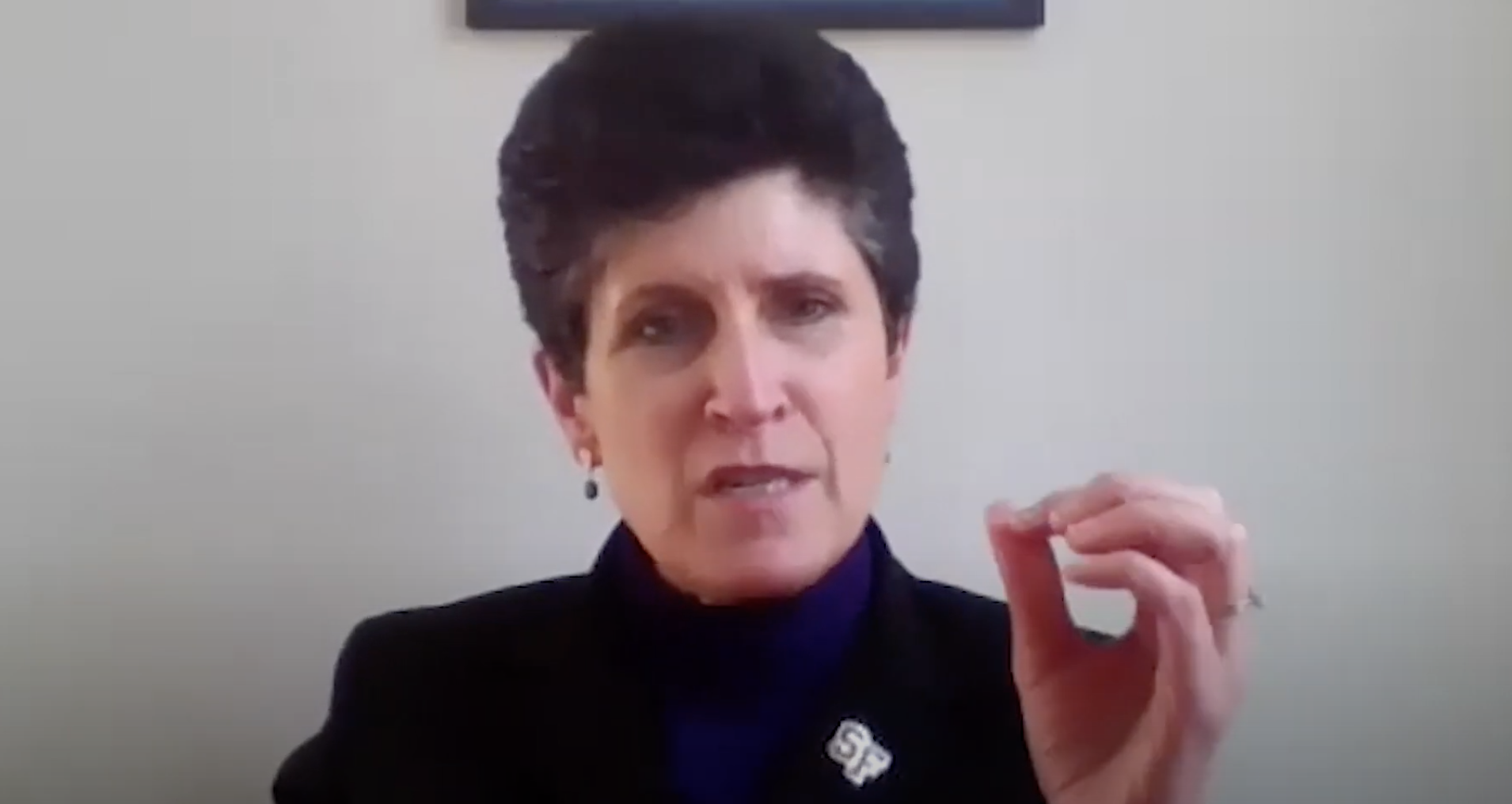 Unrepentant Palestinian terrorist Leila Khaled’s September 23 virtual appearance at San Francisco State University couldn’t have occurred without the steadfast support of Lynn Mahoney, SFSU’s far-left virtue-signaling president. After being canceled by Zoom and Facebook, “Whose Narratives? Gender, Justice, & Resistance: A Conversation with Leila Khaled” appeared on YouTube for 23 minutes before that platform, too, pulled the plug.

A leader more concerned about radicalizing students than supporting radical chic would have prevented Khaled’s appearance altogether. Faced with the greatest campus controversy since her July 2019 appointment as president, Mahoney might have leveraged her progressive bona fides to condemn terrorism and those who champion it. She might have taught her community why academic freedom demands respect for a diversity of opinion, something sorely lacking in academe, but not apologias for violence and murder issued by an active member of a U.S.-designated terrorist organization, the Popular Front for the Liberation of Palestine (PFLP).

Why not take the less painful (and morally higher) path and declare Khaled persona non grata, proclaim SFSU a terrorist-free zone, and act like Abdulhadi’s boss rather than her enabler?

Instead, in a Janus-faced September 5 letter to the community that never mentions Khaled, Mahoney states “clearly and quickly” her condemnation of “terrorism and violence” as well as “anti-Semitism, Islamophobia, anti-Blackness, racism,” as if the issue at hand were anything other than violent anti-Semitism. Yet, she must “say equally emphatically that we support the right of our faculty to academic freedom and to conducting their teaching and scholarship without censorship” — a bastardization of academic work to include spreading terrorist propaganda. Still, she says she condemns “the glorification and use of terrorism and violence, particularly against unarmed civilians” — a hollow statement given that Khaled’s lionization by her academic allies derives precisely from her terrorist background.

Immediately following the event’s abrupt end, Mahoney issued a second letter proclaiming again “the right of faculty to conduct their teaching and scholarship free from censorship.” She mentions Khaled by name four times, but never acknowledges her background or uses the word “terrorism.” Rather, she laments that the cancellation would be “deeply wounding” to some, who would “feel” their “dissent silenced,” even as Khaled’s appearance would be “deeply wounding” to “others in the community.” Plenty of regret for “wounding,” but no sense of moral responsibility. Through it all, her support for Khaled’s appearance never wavered.

Such unyielding commitment is striking given the central role in this saga played by SFSU professor Rabab Abdulhadi, a notorious anti-Semite and perennial thorn in the side of SFSU administrators. Director of the university’s Arab and Muslim Ethnicities and Diasporas/Race and Resistance Studies (AMED), Abdulhadi has an affection for Khaled that isn’t surprising. In 2014, Abdulhadi struck an MOU with her hometown university, Hamas-friendly An-Najah, and later used taxpayer dollars to send American terrorists and their Palestinian counterparts to the West Bank. A founding member of the U.S. Campaign for the Academic and Cultural Boycott of Israel (BDS), she infamously posted on AMED’s official Facebook page that Zionists are not welcome on campus. When then-President Leslie Wong stated that Zionists are in fact welcome at SFSU, she replied that he had launched “a declaration of war against Arabs, Muslims, Palestinians.”

Abdulhadi’s actions sparked a 2017 lawsuit against the school for its “long and extensive history of cultivating anti-Semitism and overt discrimination against Jewish students.” Although the suit was eventually dismissed, Abdulhadi almost immediately sued SFSU for ostensibly harassing her because of her Palestinian background. In return for Mahoney’s support during the latest crisis she caused, Abdulhadi wrote the provost to accuse the president of “siding with Zionist defamation, silencing and bullying” by not more forcefully resisting Zoom for its “censorship.” Meanwhile, Rep. Doug Lamborn (R-Colo.) has referred for potential prosecution Mahoney, Abdulhadi, the university generally, and another professor to the Department of Justice for providing material support to a foreign terrorist organization (PFLP).

A more churlish, ungrateful scourge to a university president is hard to imagine. Why, then, does Mahoney so steadfastly defend Khaled, Abdulhadi’s latest affliction on the SFSU community? Why not take the less painful (and morally higher) path and declare Khaled persona non grata, proclaim SFSU a terrorist-free zone, and act like Abdulhadi’s boss rather than her enabler?

The explanation is twofold: Mahoney’s leftist academic background, which perfectly prepared her for her current role, and the nationwide politicization of university administrators, including presidents.

Mahoney’s resume is a model for anyone who aspires to lead a university. Her official biography at SFSU’s website notes she “has lectured extensively on the construction of whiteness in the U.S. and the construction of gender globally,” trendy topics that have overtaken the humanities by pushing out more traditional work. As a Stanford undergraduate she majored in American studies, among the most politicized disciplines, and credited it with preparing her for an academic career. Interviewed in a Stanford newsletter, she listed “very pressing twenty-first century challenges — climate change, the resurgence in white supremacist ideologies and violent behaviors, geopolitical unrest all over the place.”

Such a list grows naturally from Mahoney’s earlier work. Her history Ph.D. dissertation at Rutgers became her only book, Elizabeth Stoddard and the Boundaries of Bourgeois Culture (Routledge, 2003). In it, she praises the 19th-century writer and poet as a proto-feminist “disgusted with prevailing models of virtuous womanhood” who eventually advocated “a wholescale assault on the nineteenth-century cult of true womanhood.” After Rutgers, she taught “U.S. women’s history and feminism, race and ethnicity” at Purchase College, SUNY, before accepting administrative positions within the California State University system, where she remains.

Unfortunately, Mahoney is no outlier. As academe’s mission shifted since the late 1960s from the quest for knowledge to the pursuit of social justice, presidents at schools as diverse as Princeton and SFSU donned the mantel of activist-in-chief, leading an army of administrators and professors to battle what they claim is systemic racism, bias, and inequity in American society. Examples of college officials who have suppressed free speech, instituted draconian diversity requirements, and failed to support faculty who break with stifling intellectual orthodoxies abound.

Given this self-destructive trajectory, Mahoney’s desire to hide behind the façade of “academic freedom” rather than prevent a member of a foreign terrorist organization from addressing students or crack down on the aggressive anti-Semitism of one of her professors, makes political if not moral sense. In the eyes of such a person, Leila Khaled and Rabab Abdulhadi check all the boxes of those who are today “disgusted with prevailing models of virtuous womanhood.” They, too, loathe bourgeois culture as they “struggle to create a gender-neutral model of self-development.” If they happen to use airplane hijacking and attacks on Jewish students to achieve their goals, what’s a woke leader to do but man the barricades and continue the fight? There’s always a new generation to indoctrinate and malform.

This sorry episode describes, in a nutshell, how sick American higher education has become. Expecting our institutions of higher learning, especially public universities like SFSU, not to host actual terrorists or coddle vile bigots is the bare minimum of civilized behavior any nation can withstand. We need to defund them now, prosecute them where applicable, and take back our institutions before it is too late.

If you wish to contact SFSU President Lynn Mahoney, please keep your comments brief and respectful. She may be reached at president@sfsu.edu.

Winfield Myers is director of academic affairs at the Middle East Forum and director of its Campus Watch program.