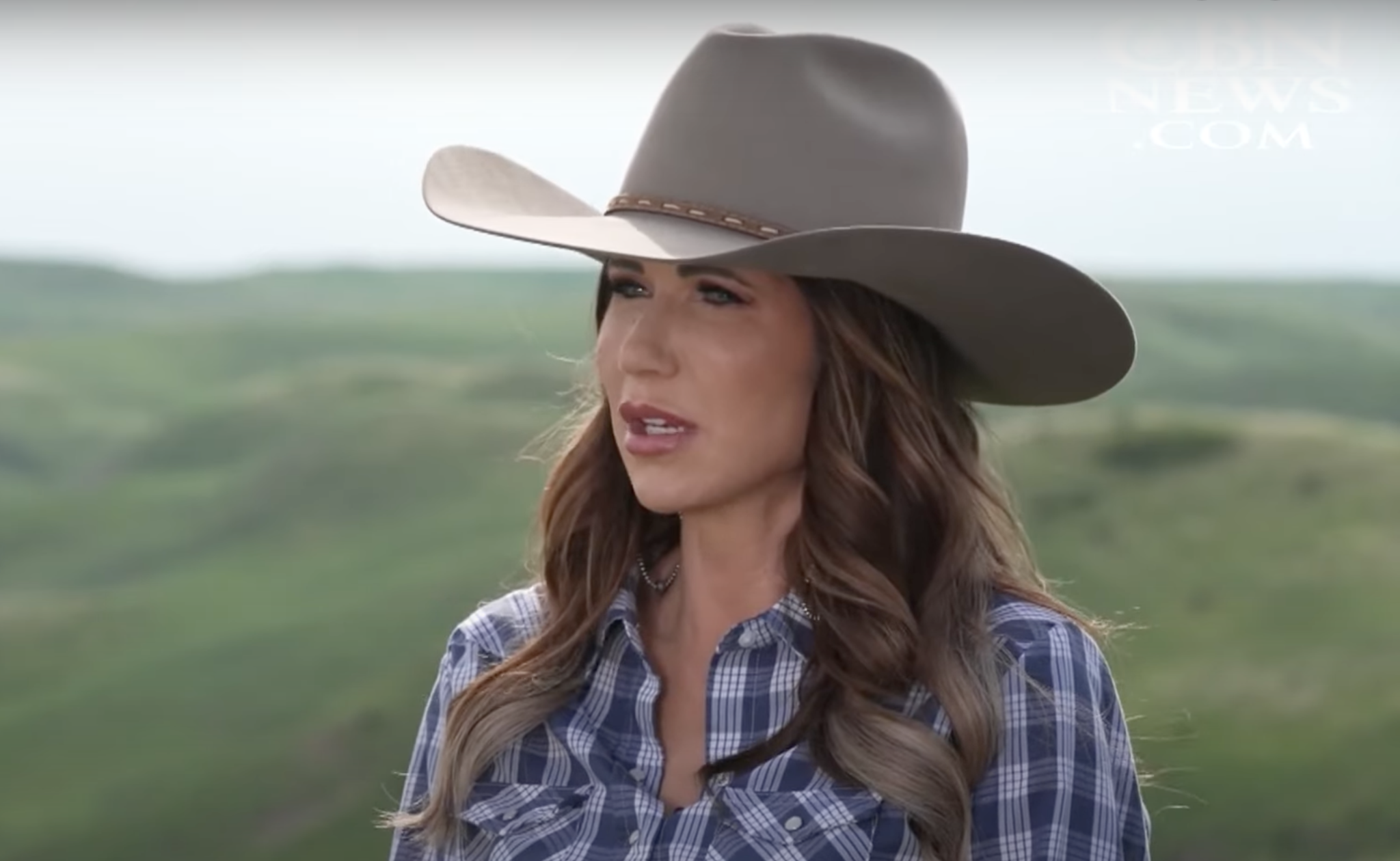 More Politics
Sign up to receive our latest updates!
Register
Hot Off
The Press
Flynn Files
Republican Superstar Losers
by Daniel J. Flynn
A Further Perspective
Why Does the GOP Elite Hate Its Own Base?
by Josh Hammer
Daily Folios and Consecutive Sentences
Brittney Griner Represents the Best of America
by Dov Fischer
Hither and Yon
Five Quick Things: Dirty Joe a Border No-Show
by Scott McKay
Blog
Trump the Constitution Shredder
by Alex Adkins

On Tuesday, South Dakota State University released a poll with a shocking result: South Dakota Gov. Kristi Noem, who is up for reelection on Nov. 8, is up by only four points over her Democratic challenger, state Rep. Jamie Smith.

“[W]e expect that the race will be relatively close by South Dakota standards,” concluded pollster David Wiltse, director of the SDSU Poll. “Given the poll’s 4% margin of error, a Smith victory is not out of the question.” The poll was conducted between Sept. 28 and Oct. 10.

Noem has expressed interest in running for president in several interviews and has placed paid campaign advertisements in important primary states, including New Hampshire, Iowa, and South Carolina.

If, however, Noem struggles to win reelection in her solidly Republican home state, it could all but eliminate her from the race for the presidency in 2024. GOP candidates in South Dakota routinely achieve victory by double-digit margins; an inability to garner a level of popularity consonant with the state’s high Republican population could portend certain defeat for Noem in more competitive states. South Dakota Sen. John Thune, for comparison, is projected by the same polling organization at South Dakota State University to beat his Democratic opponent by a margin of 25 percentage points.

South Dakota Democrats, recognizing the opportunity to dampen Noem’s national aspirations, are using the poll to portray her as unpopular at home. Their narrative is that Noem’s focus on raising her own national profile ahead of a potential 2024 bid has alienated her from South Dakotans. They also point to the allegations of unethical conduct that have dogged her.

Moreover, Democrats contend that Noem was never beloved by South Dakotans. The Hamlin County rancher moved into the governor’s mansion after defeating Democratic opponent Billie Sutton by only three percentage points. This was the closest gubernatorial race in South Dakota in 32 years in a state that hasn’t elected a Democratic governor since the ’70s and that voted for former President Donald Trump in 2020 by a 26-percentage-point margin.

Most political prognosticators have been expecting Noem, who became a national figure after leaning into Trump’s model of populism and refusing to implement strict COVID rules, to win. The Cook Political Report says that her race is “Solid Republican.” Politico is less certain with its prediction, labeling South Dakota as “Likely Republican.”

It is difficult to know how South Dakota’s gubernatorial race stands, given the lack of polling in what has been considered an uncompetitive race. The shock South Dakota State University poll, which surveyed 565 registered voters, comes from a new research group that has yet to establish itself or earn a reputation for accuracy.

FiveThirtyEight lists South Dakota State University’s poll as the only available poll on the state’s gubernatorial race. The statistical website states that Noem has a 99 percent chance of being reelected.

Noem’s communications director, Ian Fury, blasted South Dakota State University’s polling organization prior to the poll’s release, noting that it only became active in 2020 and is not rated by FiveThirtyEight. Fury said that the SDSU Poll’s October 2020 finding that a majority of South Dakotans disagreed with Noem’s pandemic response contradicted the results of a poll conducted by the Argus Leader, South Dakota’s most prominent newspaper, and that the SDSU Poll found in one survey in 2020 that most South Dakotans supported a mask mandate by a wide margin — an assertion that Fury found absurd.

Democrats have also pointed to another alleged poll they contend shows that Noem is facing a tough race. Smith’s staffers claim that they got ahold of an internal poll leaked from Noem’s campaign showing that she is leading the state senator by only three percentage points. There is no evidence that this poll exists.

In the lead-up to the release of the university’s poll on Tuesday, the poll’s director made a media appearance where he gave a preview of the results. He said that they put the race “right in that margin of error.” After that preview, Stephen Groves and Jonathan J. Cooper of the Associated Press penned an article Sunday, ruminating on the consequences for Noem of a close victory — or even defeat — in South Dakota.

“If Noem has ambitions beyond her state, she must first take care of political business back home: winning a second term in November,” write the two journalists.

A South Dakota Democratic strategist, Drey Samuelson, speculated to the Associated Press based on personal anecdote that the race is neck and neck. “Everyone I talk to, both Republicans and Democrats,” he said, “believes that [Smith] has closed the gap on [Noem].”

Samuelson argued that Smith has turned Noem’s ambition against her by emphasizing her out-of-state travel and her frequent appearances on national television.

The Associated Press trotted out a second expert who cast doubt on Noem’s ability to be successful at the national level.

“There are some lingering questions about whether she is ready for prime time,” said political strategist Michael Card, pointing toward her opposition to abortion in all cases, including in instances of rape or incest.

Noem has significant experience on the national stage. In 2020, the story broke that she had a contract for a $130,000 TV studio, which is likely useful for her numerous appearances on Fox News. Also in 2020, Trump made a trip to South Dakota for an Independence Day rally that gave a starring role to Noem. Last week, Noem traveled to Arizona, where she appeared with gubernatorial candidate Kari Lake before an enthusiastic crowd of women. Noem remained seated while speaking, as she recently underwent back surgery.

In response to the Arizona trip, which coincided with a family wedding that took place there, her gubernatorial opponent said that Noem “can’t help but to choose national politics over South Dakota.”

While South Dakota Democrats are likely exaggerating the tightness of Noem’s race, the election will be a critical test of her support on the right. If Noem wins as an incumbent by significantly less than other Republican South Dakota candidates, conservatives will likely doubt that she can build a broad Republican coalition nationwide.

Despite Noem’s national presence, she hasn’t always had an easy time solidifying her support on the right. She has faced particular opposition over her approach to men who want to play women’s sports.

Noem signed a bill earlier this year banning boys and men from playing in girls’ and women’s sports. But that only came after she vetoed a bill last year that would have done the same, saying that it wouldn’t have survived legal challenges. She instead barred men from women’s sports by executive order a month later.

A certain bitterness on the right toward Noem has remained ever since her veto, despite the fact that she remedied her political misstep via law.

Walsh claimed that the only reason Noem ever attracted significant political support on the right is that she is physically attractive.

“No use for Kristi Noem,” he said. “Kristi Noem is a very attractive woman, so she’s got that going for her.”

As far as I can tell that’s the only reason why she was ever looked at as some sort of 2024 potential front-runner…. The hype and everything that she’s gotten from conservative media is entirely based on the fact that she’s an extremely attractive woman, which she is.

Noem asserted that Walsh had “stooped to horrible misogyny” and told him, “Eyes up here, Matt.”

Walsh didn’t back down, saying that his assertion that the then-49-year-old grandmother’s physical appearance is the only thing that got her where she is “an obvious truth.”

Whether the GOP’s distaste for Noem is concentrated in certain subsections of the party or is a broader phenomenon will become clearer next month. A wide margin of victory will quiet the naysayers, while a close victory may signal the end of a presidential campaign that never began.

As for Noem, her communications director says that she “has never taken a single election for granted.”

“She works hard for her constituents, she works hard on the campaign trail and she is going to run through the finish line.”

Ellie Gardey
Follow Their Stories:
View More
Ellie Gardey is Reporter and Associate Editor at The American Spectator. Follow her on Twitter @EllieGardey.
Most Popular
1
Daily Folios and Consecutive Sentences
On Trump, Kanye, Biscuit, Jews, and Dinners
by Dov Fischer