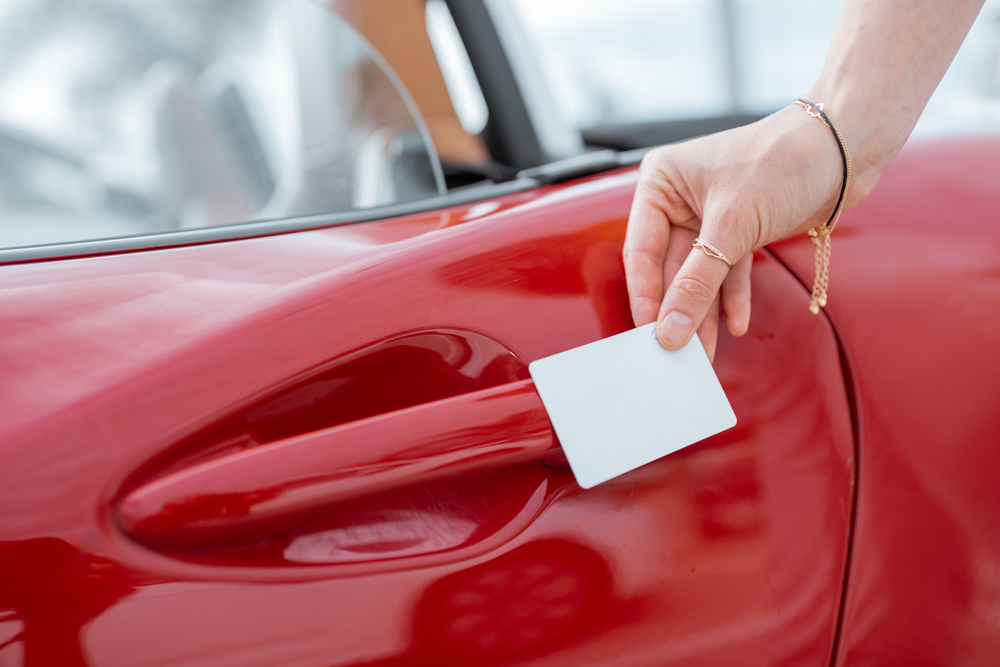 The latest thing is a “key” that isn’t even a fob — the thing that has largely replaced the physical keys that used to be the way you started a car or unlocked its doors, as by inserting them and turning them.

The fob eliminated the need to insert and turn anything. Instead, you carried the fob in your pocket or purse, and it unlocked the door by sending a wireless signal to the car announcing your proximity. Once behind the wheel, newer versions did the same — unlocking the ignition (and steering column) electronically, so that all you had to do was push a button to start the car.

But the fob has its downsides.

The first is its bulk. Keys are lithe things that fit easily and comfortably in one’s pocket. But the fob is a chunk of awkward plastic that can only be slimmed down so much because of the nature of the thing. The physical electronic components within it can only be made so small. That plus the buttons, which one depresses to unlock/lock manual-electronically (like a garage door opener).

Some of these fobs are almost as bulky as a second cell phone, and it’s debatable whether the small convenience of not having to insert a key into a lock is outweighed by the inconvenience of having to lug around a fob.

Another downside is that fobs have batteries, and these have to be replaced periodically. It’s a small hassle but a hassle nonetheless, if you forgot to get fresh batteries. Old-school keys never go dead. Unless you break them, they always work.

But the biggest downside to the fob is its cost to replace. It’s a complicated — and proprietary — piece of technology, usually specific to a given make/model of car.

When a fob wears out, gets damaged as by running it through the wash, or just gets lost, replacing it is analogous to waiting five times as long to charge an electric car versus gassing up a non-electric one. The cost to buy and have the dealer program a new fob can be several times the cost of having a new key cut at the hardware store … and that’s the best-case scenario.

A “cheap” aftermarket/generic replacement fob costs around $30 — versus about $5 to get a replacement old-school key cut. Some factory replacement fobs cost more than $100, and you have to buy some of these at the dealership because there aren’t aftermarket alternatives — because of the proprietary tech within the fob.

Enter the credit card key. It’s a piece of encoded plastic that you can carry in your wallet as you would a credit card. Or like one of those cards they give you at hotels to unlock your room — and in fancier hotels to unlock the elevator and grant access to in-hotel amenities like the exercise room. 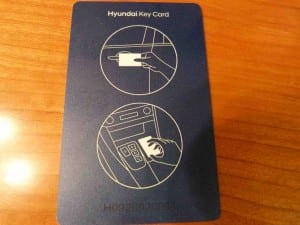 A card has no moving parts to wear out. It starts your car very similarly to the way you use a credit card to gas up your car, as by waving it at the scanner at the pump.

You wave it at the door handle, and the lock unlocks. You place it on the center console, on a pad ahead of the gear selector, and the engine is ready to start. Just push the button (same as with a fob).

The upside is obvious: No more fob (though Hyundai, one of the pioneers of this new system, provides one as a backup) and so no more bulky thing to carry around in your pocket. You’re less likely to run it through the wash, too — unless you forget your wallet in your pants pocket.

Even then, it should be OK as there are no electronics within to short-circuit by getting them wet.

Even better, there is no legitimate reason for the card to to cost more to replace than the discount cards you get for free from chain stores and wave at the scanner to save a few bucks on whatever you’re buying. It’s just a piece of plastic with a scannable code embedded within it.

The worry is it’ll cost more regardless, mainly because the companies making them could charge more. Not for the card itself, which after all is just a piece of plastic, but to code/activate it for you, in the event you need a new one.

Because what choice will you have? It’s their electronic hocus-pocus, after all. And it is entirely possible these sort entry/car-start system will become as unavoidable as the fob, which almost all new cars come standard with, making it very hard to avoid if you’re leery.

Another worry is security.

Hyundai’s Digital Key System works with smartphones, which can be used to send an ethereal “key” (no card, even) via an app (provided via the Google Play Store) to another person, anywhere. The problem there is obvious. Cell phones can be hacked, and that means the potential for someone to jack your app — and then your car.

It is also possible the key cards themselves are hackable, just as credit cards can be hacked. The technology — and so the vulnerability — is similar.

The sell is, of course, convenience.

That’s same sell used for smartphones — and fobs. Now you can get rid of the fob and use your phone to not only unlock and start your car but also access the car and its systems remotely, in order to do “neat” things like adjust the mirrors and seats and even preset the audio and climate controls without actually touching the car at all.

But there’s a cost to all of this neatness — and it’s arguably a lot more than the $5 it used to cost to get a physical key cut at the hardware store.