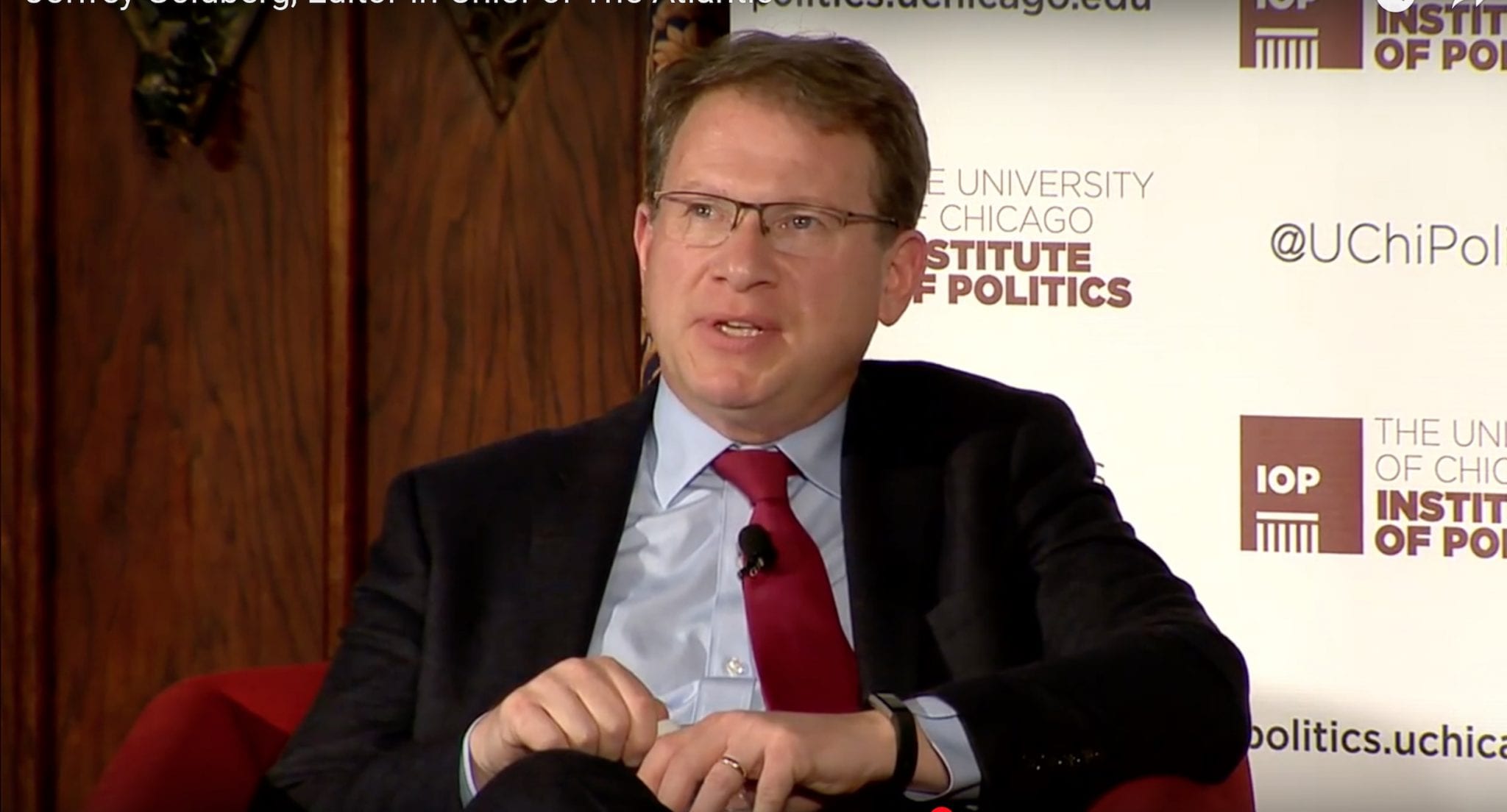 While the phrase is famously associated with the former star of The Apprentice, who at the moment has another even more interesting job, in fact the phrase is one that conservatives in the so-called “mainstream” media — aka the liberal media — have increasingly come to expect.

The latest to experience the heavy hand of the Old Media Order is Kevin Williamson, ex-star of National Review and now the even later ex-star-of-the-nanosecond at the left-leaning Atlantic. Kevin was pitched over the side for having unacceptable views on abortion. Which is to say, he objected to a violent procedure practiced on babies by proscribing an end-of-life procedure on those who consented to same, known in this case as hanging.

I would… ahhh… disagree with Kevin’s prescription. But a firing offense? When leftists run all over the Old Media landscape — the Atlantic included — saying outrages to no offense at all?

The Pharisees of the Atlantic and the larger liberal media were horrified at Kevin Williamson for saying women who have abortions should be hanged. They never blinked when Washington Post columnist Ruth Marcus proscribed killing a Down Syndrome baby, aborting it simply because of its inherent disability. Liberals pretended offense when candidate Trump supposedly mocked a disabled reporter. But abort a disabled baby? No problem!

Nor did the Atlantic hesitate to run an article which, after comparing Donald Trump to Adolf Hitler by saying they were not comparable (ya think?), concluded this no-Trump-is-not-Hitler game by saying (bold print supplied):

Got that? Trump isn’t Hitler but he’s a “strongman” who can do “damage… to democracy.” No outrage there.

Then there was this jewel from the Atlantic that suggested the President of the United States was building “concentration camps” for illegal immigrants. But of course. Illegals are being put into death camps where they are starved, left untreated for disease, and summarily executed. No intimations of Hitler there, right?

Then there’s the Atlantic’s selective obsession with race. The magazine’s Ta-Nahisi Coates suggests the President is a racist. No big deal there for the Atlantic. Coates even follows the left-wing script by pushing the standard leftist lie that “birtherism,” which Trump was accused of when questioning President Obama’s birth certificate, is racist. Ignoring with a typical Leftist sleight of hand that birtherism first reared its head when Democrats accused a white Republican President named Chester Arthur of pretending to be born in the United States when in fact he was a Canadian by birth and hence, they charged, ineligible for the presidential office he was holding. Birtherism, you see, is OK for the white Republican but totally racist for the black Democrat.

Interestingly, the magazine scolded Glenn Beck for calling Obama a racist. So it was OK to call Trump a racist, but not Obama? No double standard or fired Atlantic writers there.

Coates once did an extensive piece on reparations for African Americans, detailing the politicians who played key roles in setting discrimination policies. Somehow the word “Democrat” never seemed to appear.

Over here at the Daily Wire Paul Bois has taken on the Atlantic’s vivid hypocrisy by showcasing Coates’ writings, saying of a Coates book:

Coates’ systemic racism narrative reaches such toxic levels that in the very same book he described 9/11 first responders as being “not human” for their playing a part in the oppressive system he envisions.

“They were not human to me,” Coates wrote. “Black, white, or whatever, they were menaces of nature; they were the fire, the comet, the storm, which could — with no justification — shatter my body.”

Let the record show that The Atlantic willfully keeps in their employment a man who denied the humanity of several men and women who died in the deadliest terror attack on American soil. Let it also show that during the Baltimore riots, Coates also openly advocated for violence against the police, referring to the call for nonviolence as both a “con” and a “ruse” that should be disregarded….

Would the Atlantic fire Ta-Nahisi Coates for all of this? Not… a… prayer.

The problem isn’t that writers say occasionally outrageous things. The problem is that the Old Media Order has an abject double-standard. Sauce for the conservative commentator’s goose is simply not allowed to be sauce for the left-wing commentator’s goose. Coates, writer of offensive outrage, should keep his job — as Williamson should have kept his.

As I certainly found out, the Old Media is about protecting the liberal state, and the double-standards are, well, double standards. When I called a Media Matters leader to account for his group’s anti-Semitism and fascist-style tactics in this column on Sean Hannity — CNN fired me. They didn’t take on the group or call for a debate. They simply caved to protect the Old Media Order.

Just last week the demand from the Left was for Fox to fire Laura Ingraham for a tweet about leftist Parkland, Florida high school student David Hogg, a new gun control champion. I noted here to the larger conservative community at the time that they needed to stand up for Laura because “This time it’s Laura, the next time it could be you.”

Mere hours later the Atlantic makes my point exactly as it tells Kevin Williamson that he is the “next time.” Welcome to the club, Kevin.

Look. I don’t know Kevin Williamson beyond knowing he’s a very good writer. He wrote a searing anti-Trump book, I wrote a pro-Trump book. We disagree. Excuse me… isn’t that the point? To disagree, to discuss, to hold people and ideas up for examination? Isn’t that what writers/commentators do?

Answer? Increasingly they are not supposed to do this — at least not if they are conservative and especially if they are A) Pro-Trump or, irony of ironies, B) — Never Trump. Over at Breitbart John Nolte had a searing take on this, pointing out exactly that the real price of admission for a conservative in liberal media is — total ideological surrender. In a scathing review of Williamson and Never Trumpers generally, Nolte said, in part, this:

My God, NeverTrumpers are dumb. What did these narcissistic stupes think, that they could sellout just a wee bit, just enough to retain a small part of their balls, and the Social Justice Mob would welcome them with open arms? Did Kevin Williamson actually believe that his contempt for Trump and his voters (who “deserve to die”) would be enough?

In order to chase after “prestige” at the left-wing Atlantic, this genius Williamson quit his job at National Review and then found himself fired after writing exactly one essay. Worse still, Williamson was shown the door even after using his introduction essay to prove his fealty to his new Masters by trashing his former employer and one of its few remaining decent writers (most National Review-ers are now like Williamson — disguising every column as a plea for a job at a “respectable” publication).

Williamson was fired over his swaggering desire to see women who have abortions “hanged.” The quotes, which were dug up by Williamson’s new establishment colleagues at Media Matters, are typical of Williamson: boastfully thoughtless trolling from a man who frequently confuses his “incoherent and cruel” (hat tip: Victor Davis Hanson) prose with Hemingway-esque strut.

Nolte’s point — that unless any conservative commentator kneels at the altar of what is deemed acceptable by left-wing media they are doomed to exclusion — is correct. The aforementioned Victor Davis Hanson was on to Williamson’s problem before it happened, saying this:

Sadly, I think Kevin Williamson will soon find that National Review was far more tolerant of his controversial views than will be true at The Atlantic. As I noted in the essay in question concerning progressives’ situational regulation, so too the Left also embraces situational free speech. Indeed, well before Williamson had even written his inaugural column, Jeffrey Goldberg, the editor of The Atlantic, had defended his hiring of Williamson on grounds that he preferred “all things being equal, to give people second chances and the opportunity to change,” and he further seemed delighted about Williamson’s promise to cease tweeting given that it would be interpreted as “a positive development and a sign of growth.”

Catch that first line of Hanson’s?

Sadly, I think Kevin Williamson will soon find that National Review was far more tolerant of his controversial views than will be true at The Atlantic.

Truer words were never said. Shortly after they appeared, Williamson was out of the Atlantic, banished exactly by the “situational free speech” that is at the very core of the Leftist playbook.

Over the weekend a tweet from Twitter CEO Jack Dorsey made the rounds as he said an article by two progressives who said there was a “fundamental conflict between two worldviews” in America that was best resolved by the collapse of the Republican Party and the creation of a one-party country modeled on… California. Which is to say, the picture drawn of America’s future is a seriously intolerant, rabidly politically correct nation where dissent is shut down the instant it raises its troublesome voice.

What just went on at the Atlantic is the personification of this intolerance. Just as it was the driving force behind the move to get rid of Laura Ingraham and before that Sean Hannity, Rush Limbaugh, Glenn Beck, and Lou Dobbs. And, oh yes, your humble servant.

Welcome to the club, Kevin. Now pick up your pen and get back to work. The civil war that is discussed in that article Jack Dorsey thought was “great” is raging. There is work to be done and battles to be fought.