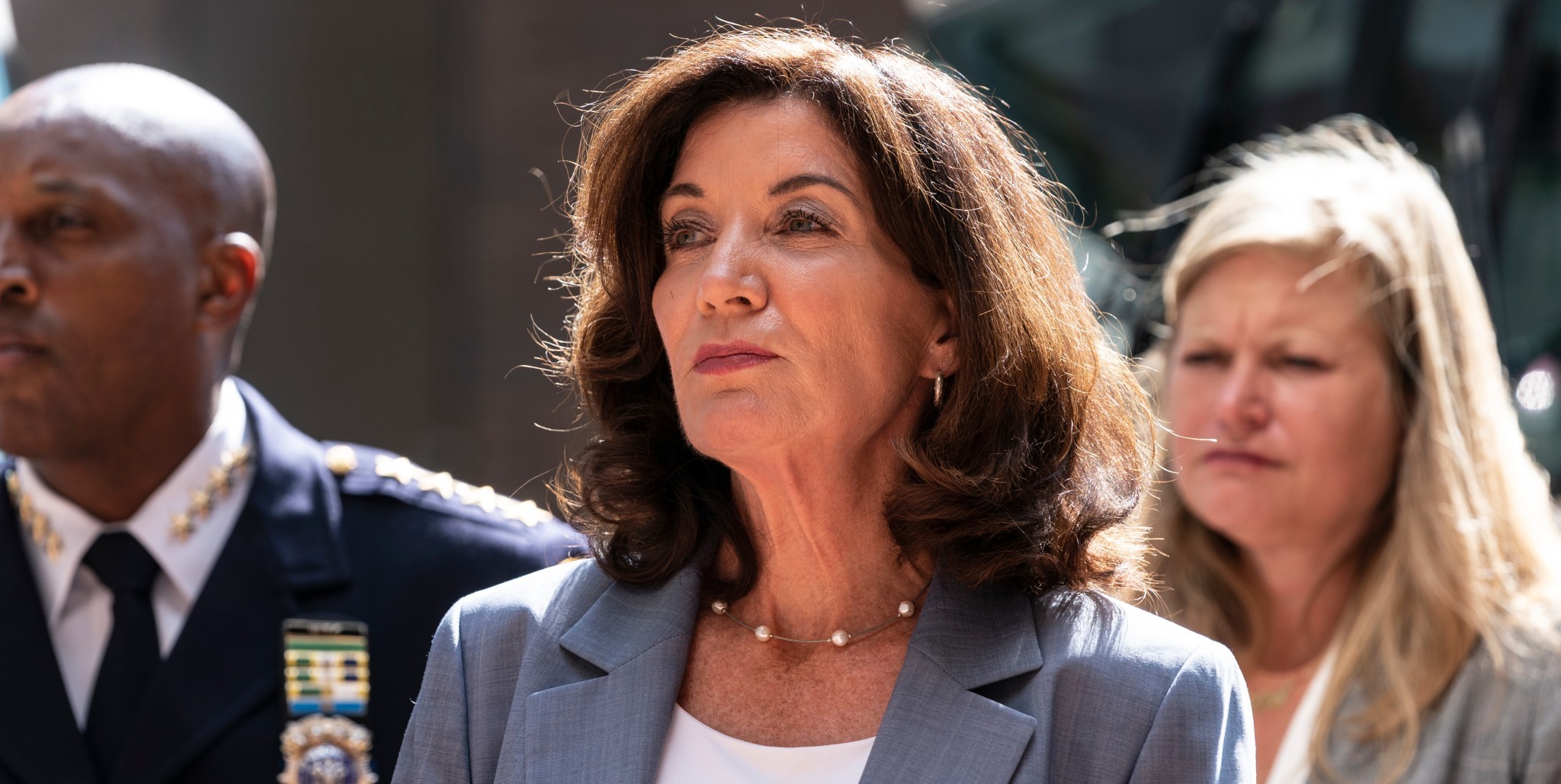 Her opponent, GOP Rep. Lee Zeldin, is surging in the polls, all momentum is behind him, and his rallies over the past few weeks have been raucous, crowded affairs. His chance of winning the governor’s race — in a state that voted for President Joe Biden by 23 percentage points — is real. Zeldin very well might shock complacent Democrats, who have held onto a governing trifecta in the Empire State for 15 years.

Recent polls have given disparate accounts of the race. Data for Progress, a left-wing polling firm, put Hochul in the lead by 12 percentage points in a poll conducted last week. The Trafalgar Group, however, found last week that the race is a tie. Trafalgar is nonpartisan, but some, including data expert Nate Silver, have suggested it has a Republican bent. His website, FiveThirtyEight, gives the Trafalgar group an “A-” rating and Data for Progress a “B” rating.

In addition, a Quinnipiac University poll that took place between Oct. 12–16 put Hochul up over Zeldin by only four points. If this poll and others like it are accurate, this is a shocking turnaround from Democrats’ usual dominance in New York. Former New York Gov. Andrew Cuomo, who ended his term on Aug. 23, 2021, after resigning over allegations of sexual harassment, in 2018 received 59.6 percent of the vote while his Republican opponent settled for 36.2 percent. Quinnipiac’s assessment of the current gubernatorial race, on the other hand, put Hochul at 50 percent support and Zeldin at 46 percent support.

Democrats have in the past couple of weeks rightly become increasingly nervous about the race. Mark Penn, a pollster who was an adviser to President Bill Clinton and Hillary Clinton for 16 years, published an essay in the New York Times this week headlined, “Why a Pro-Trump Conservative Might Win the New York Governor’s Race.” The same publication published an article last week that described Democrats’ actions in the race as both “frantic” and “frenzied.”

Zeldin has put Democrats on defense by crafting a campaign that contrasts with Hochul’s plan to maintain the status quo of Democratic machine politics.

His campaign has argued that New York establishment politics has been more about Democrats scoring victories for progressives — such as bail reform — than actually meeting citizens’ needs and improving communities.

Beyond her particular policy woes, Hochul comes across as part of a corrupt system.

Zeldin’s intense, serious manner and constant references to the state’s surge in crime — which is up by 30 percent in New York City over last year — have inspired confidence among New Yorkers, even ones who have not traditionally voted Republican. Zeldin’s approach is especially effective in a time when the majority of New Yorkers think that the state is on the wrong track, according to Siena University.

Zeldin responds to voters’ top concerns with ambitious solutions. He has promised to remove district attorneys who are refusing to enforce certain laws, hire additional police officers, overhaul the parole process and replace members of the parole board, suspend the gas tax, lift the cap on charter schools, and investigate New York’s COVID nursing home scandal. He has also floated the idea of declaring an emergency on crime in order to suspend cashless bail.

Kathy Hochul’s record pales in contrast to that ambitious strategy. She has run on the smug assumption that voters want more of the same Democratic policies. This follows years of New Yorkers suffering from a crime epidemic, shuttered schools, strict government regulations on every aspect of life, skyrocketing costs of living, and a housing crisis. (READ MORE: A Lousy Halloween for Liberal Witches)

Worse, she has dismissed claims that crime is a serious problem in New York — even though it is New York voters’ top concern, according to that Quinnipiac University poll.

On Sunday, she said on MSNBC that Republicans “have this conspiracy going all across America to convince people in Democratic states that they’re not as safe.”

The New York governor also downplayed crime in the gubernatorial debate on Oct. 25. When Zeldin asked her to speak about putting criminals in jail, she said, “I don’t know why that’s so important to you.”

Hochul’s proposed solutions for addressing New York’s crime problem come across as stale and piecemeal, especially when compared to Zeldin’s.

For example, over $500 million is being stolen from the state of New York every year in the form of fare evasion, but Hochul has not made a comprehensive plan to fix the problem. Instead, under her leadership, prosecutions for fare evasion have been extremely low; in fact, the Manhattan district attorney, Alvin Bragg, says he will not enforce the law on fare evasion at all. Zeldin has promised to crack down on crime on the subway system and to remove Bragg.

Hochul wants to impose congestion pricing on New York City drivers; Zeldin has pledged to stop such an effort and to increase the Metropolitan Transportation Authority’s income by cracking down on fare evasion.

And beyond her particular policy woes, Hochul comes across as part of a corrupt system. The man that she picked to replace her as lieutenant governor resigned earlier this year after being charged with bribery and fraud. She has committed $600 million for building a new Buffalo Bills stadium, which many, including a former Cuomo official, have found wasteful. She also has been engulfed in a scandal over paying one of her campaign donors $637 million for COVID tests.

Hochul, scrambling and on defense, has tried in recent weeks to mount a response on the issues of crime, inflation, and housing, and has made efforts to appear more moderate. But voters remember that much of her campaign has been powered by her declarations of the moral superiority of the Democratic Party on the issues of abortion and President Donald Trump. She simply banked on the idea that Democratic and independents New Yorkers could never lend their votes to a Trump-supporting pro-lifer. In doing so, she came across as deaf to voters’ more pressing concerns in a time of crisis.

The Oct. 25 debate was a prime example of Hochul’s disconnect with New Yorkers. Zeldin fired stinger after stinger at Hochul for her failure to address the crime crisis, and Hochul responded with complaints about Zeldin’s pro-life beliefs and support for the former president. In New York, where Zeldin would be governing with a Democratic legislature and thus would not be able to enact any pro-life policies or major conservative legislation, such attacks came off as irrelevant compared to the crises that have grown under 15 years of Democratic governance in the state

Kathy Hochul has the money (two and a half times more than Zeldin), the political machine, and the moral superiority complex, but Zeldin has the energy, the solutions, and the attention to New Yorkers’ problems.

This election could be eye-opening for the New York Democratic establishment.