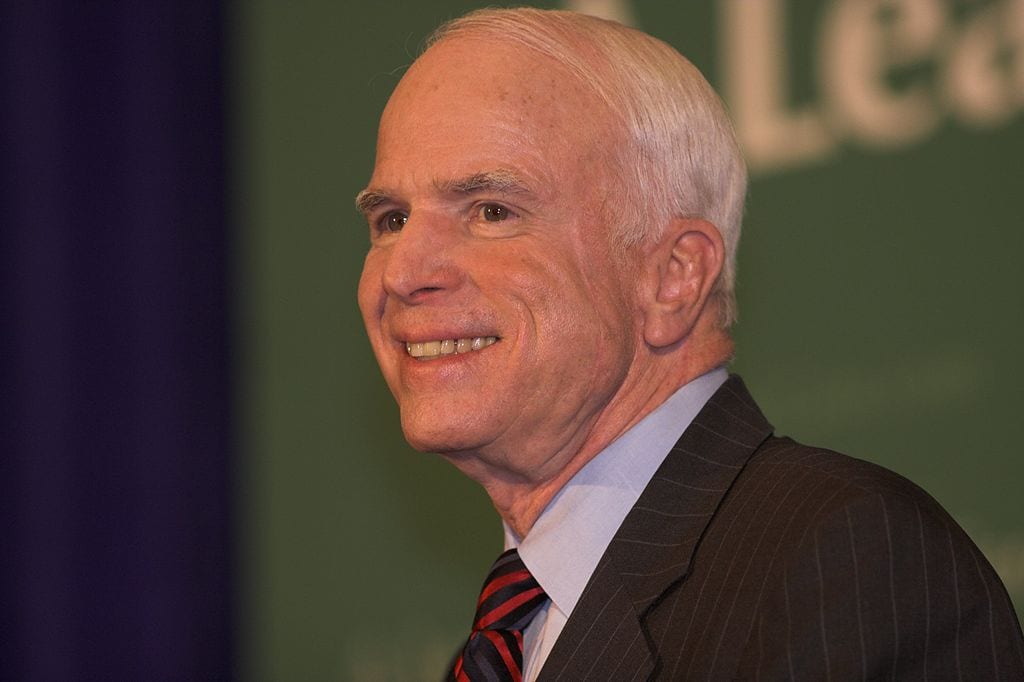 The man who loved the label of political maverick, Sen. John McCain (R-AZ), chairman of the Senate Armed Services Committee, died on Saturday, a few days shy of his 82nd birthday.

McCain was diagnosed with glioblastoma — the same brain cancer that killed his friend, Sen. Ted Kennedy (D-Mass.) — last summer. His life was one of very high “ups” and very low “downs,” and ends with an unrepaired political enmity between him and President Trump.

Their enmity stemmed from a back-and-forth between the two during the 2016 presidential campaign. Trump’s remarks in July 2015 crossed the line between the nasty and the insufferable. Referring to McCain, he said, “He’s not a war hero. He was a war hero because he was captured. I like people who weren’t captured.”

Regardless of whether you liked McCain or hated him, Trump was as wrong as it’s possible to be.

Shot down in 1967, John McCain was held in the Hoa Lo prison — known as the “Hanoi Hilton” by the prisoners of war held there — for five and a half years. When John Kerry (remember him?) ran for president in 2004, I interviewed six of the men who were held in the Hanoi Hilton for all or part of the time McCain was.

McCain, like all of them, was tortured by almost daily beatings. Some died. All of the men I interviewed told me the same two things in more or less the same words.

All said that they wouldn’t be alive but for the heroism of John McCain. And they all said that I should ask my questions slowly because the beatings they — and McCain — suffered had affected their ability to think straight.

The North Vietnamese offered McCain, tortured like the rest, early release from the prison because his father was a Navy admiral commanding U.S. Pacific Command. McCain refused.

At one point he considered suicide. At another, he broke.

In 1968, McCain was beaten into signing a false confession of “war crimes” and recorded two audio confessions that the North Vietnamese tried to use as propaganda. Several other POWs were also tortured into false confessions.

McCain and the other POWs were released in March 1973. He entered politics in 1982 and was elected to the House of Representatives. As a firm Reaganite conservative he was elected to fill retiring Sen. Barry Goldwater’s seat in 1986. He was repeatedly reelected and eventually rose to the chairmanship of the Senate Armed Services Committee.

McCain changed from a conservative to a so-called “maverick” as a result of the “Keating Five” scandal. It was all about Charles Keating and his Lincoln Savings and Loan. It began in March 1987 when Keating asked both Arizona senators — Dennis DeConcini and McCain — for help with federal banking regulators who were examining Lincoln.

In at least two meetings, McCain, DeConcini, and three other senators pressured the regulators to go easier on Keating and Lincoln. At the second meeting, Sen. John Glenn (D-Oh) told the regulators to indict Lincoln or get off its back.

Eventually, the five senators had accepted over $300,000 in campaign funds from Keating, the most going to McCain. With McCain, the Keating scandal didn’t end with the meetings and campaign contributions.

In 1986, a year before McCain met with the regulators, McCain’s wife and father invested over $300,000 in a Keating real estate project. McCain also made trips to places such as a Keating-owned Bahamas resort at Keating’s expense.

When Lincoln S&L failed, taxpayers lost about $2 billion. A Senate Ethics Committee investigation of the “Keating Five” found that McCain had exercised poor judgment but didn’t otherwise penalize him.

McCain reinvented himself in the 1990s as a quasi-liberal, an apostate of conservatism. He was embraced as a “political maverick” by the New York Times and other liberal newspapers. (They all loved him before and after his two presidential campaigns and in the years between them.)

“Maverick” was a label he reveled in. On many occasions since, it seemed that McCain’s constituency was the New York Times’ editorial board rather than the people of Arizona.

McCain made himself the enemy of “earmarks,” appropriations stuck in bills to benefit specific members of Congress. He tried to pass legislation banning reserved parking for members of Congress at DC airports. And he became the biggest proponent of campaign finance “reform,” having taken the biggest donations from Keating.

Enter Russ Feingold, a very liberal Democrat from Wisconsin. In 2002, the two managed to get their “McCain-Feingold” bill enacted. Did it put an end to corrupt campaign financing? Hardly, but it made — and is still making — a lot of money for a lot of lawyers.

As Republican politics used to go, people waited their turn to be president. McCain, who thought it was his turn, not that of some young upstart governor, fought a bitter and unsuccessful losing battle in the 2000 GOP primaries against George W. Bush. McCain then made a habit of taking on President Bush’s statements and policies.

McCain’s strangest legislative achievement was his 2005 amendment to the U.S. law against torture.

America had outlawed torture since the post-World War II version of the Uniform Code of Military Justice. In 1994, the Senate ratified the UN Convention Against Torture (UNCAT) with reservations to protect against its unconstitutionally vague language. Two years later, a well-written and highly specific federal law was enacted to mirror UNCAT and still be constitutional.

In the first two years after 9/11, the Bush administration’s Justice Department had authored legal opinions on the limits of interrogation. The most troubling technique the CIA wanted to use was waterboarding, a procedure where a restrained prisoner is made to believe he is drowning. When it became known that the CIA had waterboarded a handful of al-Qaida terrorists, the Democrats and the media created an enormous scandal saying that the CIA and the military were using torture generally on terrorists captured in places such as Iraq and Afghanistan.

Under U.S. law as it then stood waterboarding plainly wasn’t torture. For an action to qualify as torture, it would have to cause prolonged mental or psychological harm. The DoJ, using the data gathered over decades of waterboarding US pilots and special operations troops in training, concluded properly that waterboarding wasn’t torture.

Enter McCain and his acolyte, Sen. Lindsay Graham (R-SC). Together, they grandstanded an amendment to our law against torture as if torture wasn’t already illegal. As I wrote at the time, the McCain amendment served only to make a clear law entirely vague.

And that was the mystery. Why would a man who had been tortured for years, knowing that the law was already there, pretend that it wasn’t and put in place an amendment that made it unconstitutionally vague? That’s precisely what McCain did.

McCain’s career as a conservative apostate didn’t end there. He bought into the “counterinsurgency” — i.e., nation-building — strategy that President Bush adopted, insisting that the war in Iraq be fought through to victory. But, like Bush and all the other nation-builders, McCain never defined what victory was or charted a path to achieve it.

As the de facto leader of the Republican Party on defense matters, McCain stuck with the nation-building strategy throughout the Obama years. Because of his stubbornness, the Republicans were unable to admit that nation-building was a ghastly mistake and move on to a better way to fight the terrorist networks and the nations that sponsor them.

All through the Obama years, McCain batted back and forth, sometimes opposing Obama vigorously and at others supporting him. No one could tell you where McCain was, except on immigration.

In 2007 McCain partnered with his pal Ted Kennedy to produce and push his immigration amnesty bill. It was supported by President Bush, but Americans outside the Beltway were outraged.

I was the editor of Human Events in those days, and remember walking around the Senate office buildings interviewing members about the McCain bill. You could tell which senators were supporting or opposing the bills before you entered their offices.

If a senator was opposed to the bill, his telephone lines were relatively quiet, receptionists answering the calls calmly, passing them on to staffers or registering constituents’ views on the bill and other matters. The phones in the offices of the bill’s supporters were ringing off the hook, harried staff trying to keep up with the calls and snapping at constituents. The McCain-Kennedy-Bush amnesty bill failed because the vast majority of Americans opposed amnesty.

In 2008, McCain finally approached the achievement of his political dream to become president. I remember standing among the audience at CPAC in early 2008 when former Massachusetts governor Mitt Romney announced the end of his campaign. I don’t remember who was standing next to me, but I do remember turning to him and saying that we would lose the presidency in 2008.

Unfortunately, I was right. It’s fair to say that no one probably could have beaten Barack Obama that year, but McCain wasn’t a tough opponent for Obama to beat.

McCain, already aged, looked and sounded awful compared to Obama. He couldn’t keep up with the overly-slick “Hope and Change” candidate who mocked him at every turn. McCain’s selection of Alaska governor Sarah Palin as his running mate was an enormous mistake, which he regretted later. He said recently that he wished he had chosen former senator Joe Lieberman of Connecticut — a liberal Democrat turned “independent” — instead of Palin. Not that it would have made any difference.

During the Trump administration, McCain took to heart Trump’s criticisms and returned them tenfold. The most dramatic moment came in late July 2017. With a bill to repeal many of the worst parts of Obamacare at issue, McCain cast the deciding vote against it, defeating Trump on one of his most cherished campaign promises.

Beset by his illness, McCain had been absent from the Senate since last December, depriving Republicans of one of the two votes that comprised their majority.

John McCain’s death is a sad event. He should be remembered and honored for his heroism in war rather than his conservative apostasy.