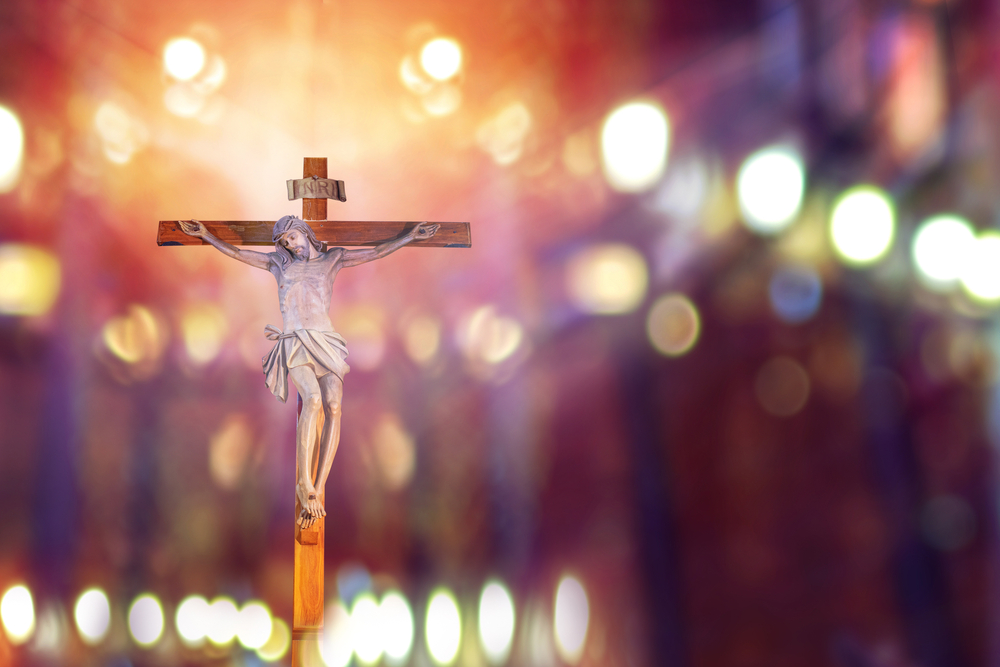 Elí, Elí, lemá sabachtháni? Or, in English, “My God, my God, why hast thou forsaken me?” This lament of Jesus (Matthew 27:35-44) as he faces death is a quotation from one of King David’s psalms, Psalm 22, where David says the following:

1 My God, my God, why have you forsaken me? Why are you so far from saving me, so far from my cries of anguish?
2 My God, I cry out by day, but you do not answer, by night, but I find no rest.
3 Yet you are enthroned as the Holy One; you are the one Israel praises.
4 In you our ancestors put their trust; they trusted and you delivered them.
5 To you they cried out and were saved; in you they trusted and were not put to shame.
6 But I am a worm and not a man, scorned by everyone, despised by the people.
7 All who see me mock me; they hurl insults, shaking their heads.
8 “He trusts in the LORD,” they say, “let the LORD rescue him. Let him deliver him, since he delights in him.”

King David’s words are dual here. He is speaking of himself, and he’s also speaking prophetically about Jesus, the Son of Man, lamenting being turned away from by his Father, alone, on the cross. Mocked, tortured, betrayed, Jesus faced death and wanted to spared. He begged his Father to save him and was left to die.

It’s at this moment that Jesus’ plight is utterly relatable. I remember that as my son was dying, even though surrounded by people, I felt alone facing something too terrible to comprehend. King David knew this despair. So did Jesus.

In verse 8 of Psalm 22, David quotes the words of unbelievers who make fun of believers. Oh, so you’re going through fill-in-the-blank trial, where’s God now? On Twitter, more than one unoriginal commenter has made fun of God. Mocking God is not new. Mocking believers is not new.

Jesus surrendered to his plight. His last words: “Father, into Your hands I commit my spirit.”

That was not the end of the story. Three nights and days later, Jesus rose from the dead, conquering death and sin, freeing all who believe in Him.

I’m writing about this today because it’s been a difficult and lonely year for so many. Some have been sick. Some have been in the hospital alone or with one caregiver. Some have been in old folks’ homes, alone, with no visitors. Some children have languished, isolated with no friends and studying at home while parents worked. Too many people have died alone due to heartless policies of separation. All of this isolation is something we’re going to look back on with horror.

Deciding how to handle togetherness has been challenging. My boys are in school and jobs with lots of public contact. Rather than go to church and potentially infect someone before knowing we’re sick, we’ve stayed at home. At this time of the year, though, missing church is unthinkable (and lots of people have been vaccinated now), and we went back and saw our dear friends in person. It’s been a rough year for all involved. The isolation has taken its toll on the elderly especially.

Humans are social creatures and need each other not just for basic resources like food and shelter but also conversation and connection. Connection has been sorely missing this year. It’s aged everyone in an alarming way.

Even without COVID complicating everyone’s lives, the human condition is one of suffering, and often suffering in solitude. Jordan Peterson’s books emphasize this point over and over. To be human is to be frail. To be frail is to suffer.

It’s heartening to know that our Lord and Savior Jesus Christ took this journey, too. He knows suffering. He knows what it means to feel alone and abandoned. He also knows the way back. Jesus Christ rose from the dead on the third day, a conqueror. His heroic journey through pain and death and then rising again is a journey all can make. Suffering doesn’t have to be the end of the story. It can be a means to an end and a beginning again.

Like Jesus, all people travel a path in this world and endure their share of suffering. Some may endure mocking. In this secularized world, where Christians are treated like mindless simpletons, Christians should expect the scorn to increase. And why not? Jesus told his followers that they’d be hated for His name’s sake (Matthew 24:9).

The hope, though, is that the harassment, mocking, solitude, and hardship are not the last word. Life, an even better one, is promised — and not just in the Kingdom. Jesus says in Matthew 11:30, “For my yoke is easy, and my burden is light.” The human condition is a difficult one. It’s infinitely more difficult alone. Taking on Christ’s yoke makes it easier. A Christian ceases to labor alone.

After rising, Jesus promises to pray to the Father to send the Comforter (John 14:16). Jesus knew, more than anyone who has ever lived, the burden of being human, the pain of being forsaken.

Take heart, friends! Jesus Christ rose from the dead. He is risen! And because Jesus suffered and died, and, most importantly, rose again, we have the hope of redemption and of life everlasting.

Jesus wasn’t finished. His last prayer is for oneness. He wants believers to be together with him and with God the Father. He says in John 17:20-23:

20 Neither pray I for these alone, but for them also which shall believe on me through their word;
21 That they all may be one; as thou, Father, art in me, and I in thee, that they also may be one in us: that the world may believe that thou hast sent me.
22 And the glory which thou gavest me I have given them; that they may be one, even as we are one:
23 I in them, and thou in me, that they may be made perfect in one; and that the world may know that thou hast sent me, and hast loved them, as thou hast loved me.

The final gift that Jesus asks for his believers is that they they are one in him and the Father. What a beautiful thought! From the solitude of suffering to the glory of unity in love. It doesn’t get better than that.