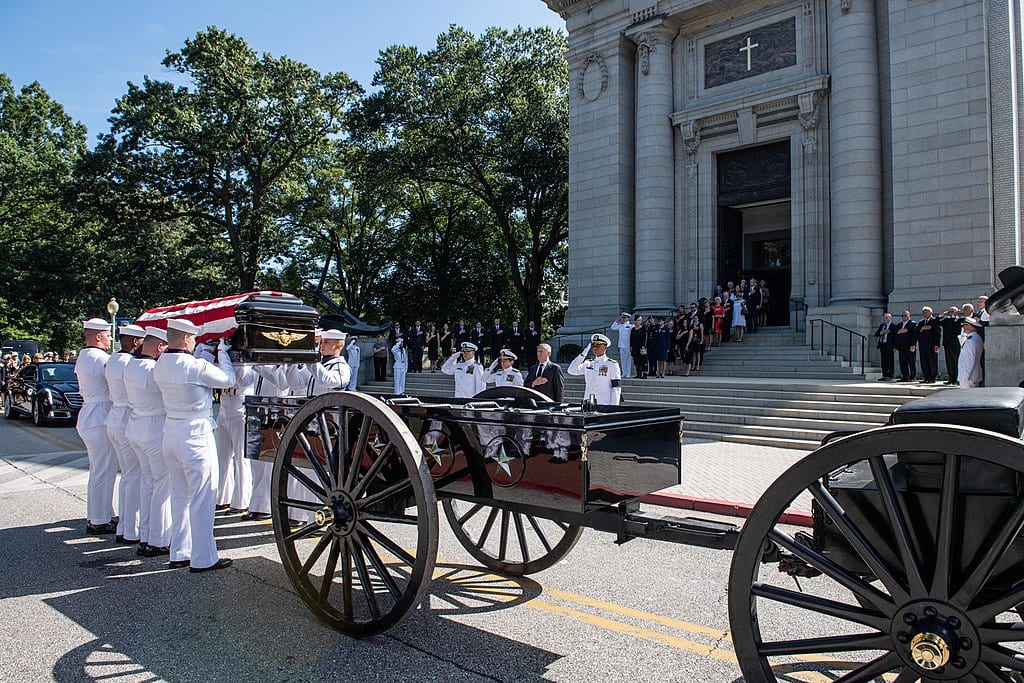 Not waiting for John McCain’s body to fully cool off in its grave, Joseph Duggan has published in The American Spectator a didactic purporting to differentiate the character of my father, Jeremiah Denton, from that of John McCain at the distinct expense of the latter. Apparently incensed at the fact that the McCain family did not invite Donald Trump to Senator McCain’s memorial service, Mr. Duggan paints McCain as a shameless self-promoter and concludes with the parting shot that “no one, obscure or famous, was told not to attend” my father’s Arlington funeral.

As his oldest son, I was in charge of my father’s funeral at Arlington, gave the eulogy, etc. One person of the many people who came that day to honor my dad was John McCain. He did not attend as a self-promoting opportunist or even VIP but slipped into a rear pew inconspicuously, sat, observed, and left as he had arrived. I was not even aware of his presence until after and I didn’t learn it from him. One person who was not there was Donald Trump. It is inconceivable to me that he’d ever heard of my father.

Mr. Duggan also attempts to ascribe a certain shallowness to McCain, relative to my dad, by calling Dad “one of the first Catholic intellectuals to make common cause with” Jerry Falwell and Pat Robertson. As the talking heads say today, there’s a lot to unpack there.

First, Dad was not a wantonly modest man, but I never heard him refer to himself as an “intellectual.” Nor a single one of his close friends.

Second, having been raised in the very Catholic City of Mobile, Alabama, in the ’20s, in a fatherless home, across the street from the Catholic Church and school he attended, his very orthodox Catholic faith (which he called “knowledge”) was understandable. As for later associating with the likes of Pat Robertson and Jerry Falwell, suffice to say not all of the family viewed that as his finest hour. As my mother, also a devout Catholic, put it to him, “Jerry, there are things thinking people just don’t do.” It is specious to fault John McCain for failing to make the mistake of associating himself with financial fundamentalist Pat Robertson and that lot.

No conservative today seems to be congenitally capable of getting an article in the press without the obligatory slur on that very same press. Accordingly, Mr. Duggan inaccurately asserts that the “mainstream media [meaning the reporters at the big news outlets who got the best grades in school, got the best jobs in journalism, and by all metrics are most talented writers in the world] welcomed Senator Denton to the capital with the same sort of respect and affection they have always shown to other Alabama social-issue conservatives,” citing Roy Moore as Exhibit A (George Wallace also comes to mind).

Setting aside the fact that the media never did welcome Roy Moore to Washington, what Dad actually said the most about his media coverage was that he got the “most ink” of any senator in Pravda, and it wasn’t positive. Obviously, not something our current commander-in-chief could say.

As for the American media, Dad got far more favorable than unfavorable press, even when he made some truly outlandish remarks, like “at the end of a hard day, a man kind of likes to be brought a martini by a reasonably well rested woman,” said in opposition to some women’ rights initiative.

In truth, the mainstream media was charmed by Dad and, his novel views on some things notwithstanding, ran predominantly favorable stories about him. I have “binders” of them that my mother assembled. Mary McGrory, for example, America’s first lady of liberal journalism for decades, lionized dad in an article about his legislation to bring ostracized Amerasian orphans to America from Vietnam and was Dad’s guest at his coming out gala at his apartment shortly after his election, along with a coterie of very high level neocons. Time and People wrote very favorable profiles shortly after his election. Even he, as vain as he frankly could be, said many times he got far more attention in the press than he deserved and it was largely favorable. As far as the Doonesbury cartoon Mr. Duggan lampoons, Dad loved it. I got a copy of it out of his attic when he died and have it ten feet from me. Unlike some, Dad could laugh at himself.

The implicit assumption in Mr. Duggan’s article is that, unlike John McCain, my dad would have found common cause with Donald Trump had he lived long enough. No one will ever know for sure what my dad would have thought of him. But it is a matter of record that before Trump started sweeping the Republican primaries approximately 100% of the other Republican candidates, congressmen, senators, and governors opposed him. Since he “won” the election, approximately 99% support him. He didn’t change his stripes; they changed theirs.

Within that obdurate one percent was Senator McCain, who, like my dad, was not one to change his stripes for personal expediency. Not in Hanoi; not in DC. The first and the last virtue my father instilled in me was fairness for the underdog. I do not think my dad would have much cared for Donald Trump. So please don’t presume to tag him with that stigma.

Mr. Duggan is a good wordsmith who can turn a phrase to the point of almost making a false analogy fly, but this Jeremiah Denton would appreciate it if he would desist from using his dad’s name and record to make the case that it was somehow graceless for John McCain and his family to shun President Trump who, like Jane Fonda, disparaged McCain’s service as a POW. Political correctness, after all, is supposed to be the anathema to what now passes for political conservatism.

Jeremiah Denton III knew and understood his father far better than I or any other journalists who admired the late Senator. His love for his father shines through his statement. Senator Denton of course did not live to remark upon the rise of Donald Trump or the latter phase of Senator McCain’s political career. Reasonable persons may agree or disagree with the judgments expressed in my article, which were based on much experience and consideration. In any case the judgments expressed were my own and were not intended to represent the thinking of anyone else, living or deceased.