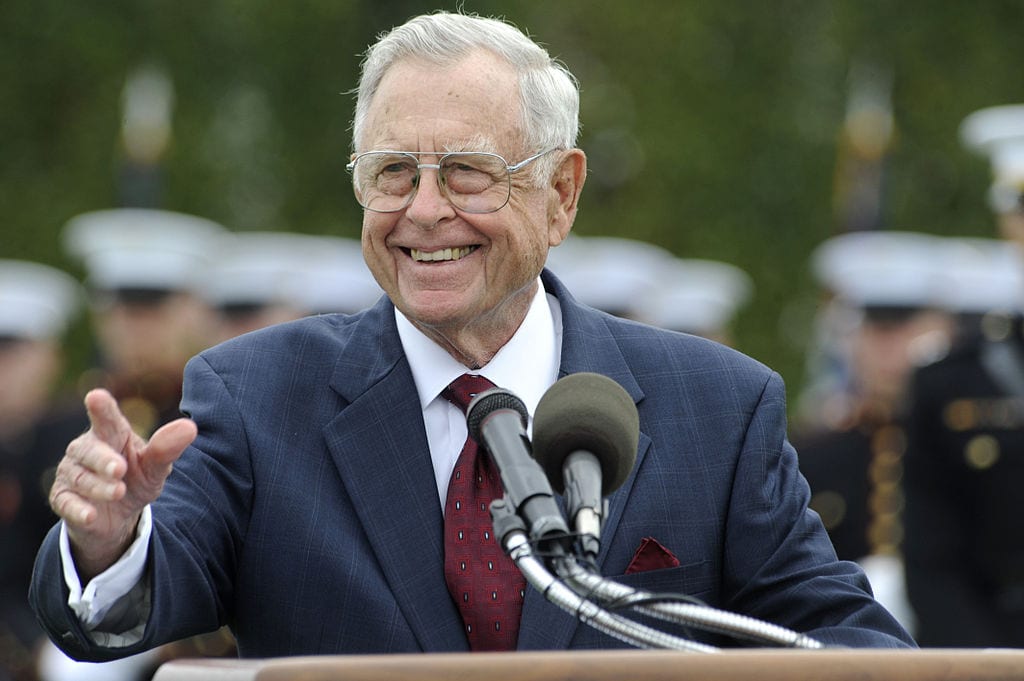 His path to distinguished service in the United States Senate led through the Naval Academy, aerial combat over hostile territory, and long years of confinement, beatings, and torture in the Hanoi Hilton.

He was a man worth remembering.

No, his name was not John McCain.

Both the parallels and the divergences in Denton and McCain’s lives tell something about the last few decades of our political history.

Twelve years older than McCain, Denton was born in Mobile in 1924, the same year as George Herbert Walker Bush. After studies at the Jesuits’ Spring Hill College, Denton transferred to Annapolis where in 1946 he graduated in a class that included a young man from Americus, Georgia, named Jimmy Carter. Denton excelled academically, earning a master’s in international relations from George Washington University and winning the Naval War College’s award for best thesis. Diligent in his study of philosophy and history, he was respected as a strategic thinker.

McCain, the son and grandson of four-star admirals, was erratic as a student at Annapolis. He graduated number 894 out of 899 members of his class. When he was shot down in 1967, he was 31 years old.

Denton suffered imprisonment for nearly eight years, McCain for nearly six. Both men gained national and international attention for defiant courage during their ordeals. As son of the admiral commanding the U.S. Pacific fleet, McCain spurned Communist Vietnamese efforts to manipulate him for propaganda purposes. Denton, as one of the top-ranking officers, outwitted the enemy when they featured him in a televised propaganda news conference. Unbeknownst to his captors, he blinked his eyes with the Morse Code letters T-O-R-T-U-R-E as he answered questions.

After their release in 1973, Denton and McCain continued naval service. Denton was promoted to rear admiral and served as commandant of the Armed Services Staff College before retiring in 1977. McCain overcame catastrophic injuries and torture to return to the air pilot’s seat. In 1977, the Navy assigned him to Capitol Hill as its liaison (de facto lobbyist) to the Senate.

In civilian life, Denton found a place as one of the first Catholic intellectuals to make common cause with the populist, largely Evangelical Protestant “religious right” of Jerry Falwell’s Moral Majority and Pat Robertson’s movement. He moved to his native Mobile, where he turned down suggestions to run for the Senate in 1978 for the seat won that year by Democrat Howell Heflin.

Two years later, Denton decided to run for the Senate as a Republican. Despite a huge disadvantage in fundraising, he stunned the GOP establishment by winning the primary against its anointed favorite, a former Democratic congressman who had switched parties after leaving office as the conservative state gravitated towards the Republican column.

He campaigned effectively on his pro-life, pro-family issues platform as well as his well-informed critique of the national security record of his Annapolis classmate Carter. When Reagan defeated Carter in November, Denton squeaked into office as the first Alabama Republican in history to win direct popular election to the Senate.

The national mainstream media welcomed Senator Denton to the capital with the same sort of respect and affection they always have shown to other Alabama social-issues conservatives such as Roy Moore or the pre-recusant Jeff Sessions.

Big Media mocked his first signature effort at legislation, the Adolescent Family Life Act. His proposal was an adaptation of existing legislation enacted under sponsorship of Democratic icon Ted Kennedy. Denton’s bill modified the Kennedy program to increase emphasis on reaching teenagers before they had sexual experience with the message that abstinence is not to be devalued as a means of preventing pregnancy and disease.

In this and other instances, Denton worked carefully and discreetly to bring about success for conservative policies through sincere bipartisan negotiation.

This contrasts with McCain’s vaunted reputation for what his apologists wrongly called bipartisanship. What McCain actually did, again and again, was to sabotage consensus within his own party out of an impulse for gaining attention and increasing his negotiating position in regard to other interests.

With no discernible principle or regard for the public interest on his side, McCain single-handedly sabotaged the repeal of Obamacare. No one can say honestly that his motivation was anything other than spite for President Trump.

McCain showed this character trait throughout his Senate career, even when the issues were more arcane — although extremely important to special interests — and were not gaining top-of-the-news publicity. This is something I witnessed in 1995, when I was communications director of the Senate Commerce Committee. Superficially, the committee was divided into two caucuses, the Republican majority and the Democratic minority. Beneath the surface, there was a third caucus: McCain.

Before my tenure on the Senate staff, I had never been a fan of Bob Dole, who was uncharismatic and inarticulate compared with the gold standard, Ronald Reagan. But in 1995, I had occasion to see and hear Bob Dole as the masterful political leader that he was in his proper venue.

Behind the closed doors of the majority leader’s office, I observed as Dole brilliantly performed tedious but important work, forging consensus on legislation among senators as individually powerful and politically disparate as Bob Packwood and Jesse Helms, Ted Stevens and Trent Lott. These extremely powerful men submitted to Bob Dole’s leadership to bring about consensus on important legislation. This kind of exercise in party loyalty was edifying, and it was for the public good. It evinces clarity, coherence, and a certain amount of respect for the will of the voters.

This was not John McCain’s way. He insisted on a playing a game of self-aggrandizement, all by himself.

Jeremiah Denton ran a complacent and half-hearted re-election campaign in 1986. Still, he was almost re-elected. In a wave election that removed all of the Republican senators who had been newly elected with Reagan’s 1980 victory, Denton managed to lose by one of the narrowest margins in history. The winner in November was a moderate Democratic congressman, Richard Shelby. Eight years later, Shelby switched to the Republican Party and has been a reliable conservative vote in the Senate ever since.

When January came around, Denton and McCain became lifelong swamp dwellers. The latter became a fixture in the green rooms and cocktail parties of Washington’s “Permanent Village,” while the former literally went fishing, retiring to an angler’s life on a lazy bayou beside his modest dwelling amid the Gulf Coast marshes outside of Mobile.

What if Denton had remained in the Senate alongside McCain?

I believe he would have stayed consistent with the values and priorities he stressed during his only term in office, while accruing the added power that comes with seniority.

Both men proclaimed their patriotism and their support for an internationalism led by American strength. But a critical difference between Denton and McCain was in the deeper meaning of these affirmations.

Another difference is in the 32 years since Denton left the Senate and McCain joined it. Today the “West” no longer has the Soviet threat to unite it for self-defense. During the past three decades, too, Western Europe and the United States have become drastically more deracinated, more catastrophically cut off from their Christian roots.

Denton’s cause was explicitly the preservation of Western Civilization. As he understood it, this was a civilization with deep, ancient, theological, philosophical, and cultural roots. This traditional order for which Denton fought and legislated, which scarcely exists anymore, is about much more than democracy, even much more than liberty.

McCain’s attachment was to a shallower, less developed political posture. It was a conflation of militaristic American patriotism with international ideological campaigns for installing democratic electoral systems anywhere and everywhere, even where plainly there exists no cultural environment in which true democracy or the rule of law might take root.

At the intellectual level, the defining difference was between solid substance and hollow form, between reality and ideology.

Another difference was in character. Senators normally have very big egos, and Denton was normal in this sense. McCain was an outlier — an extraordinary egomaniac — even within a universe of enormous egos.

Jeremiah Denton died in 2014 at the age of 89. He was buried with full military honors at Arlington National Cemetery. His funeral did not preempt television coverage of soap-operas, sitcoms, or sporting events. His pallbearers did not include Warren Beatty, but no one, obscure or famous, was told not to attend the ceremony.

Joseph Duggan, who worked in the State Department and White House in the Reagan and first Bush administrations, is an investor and consultant in St. Louis.