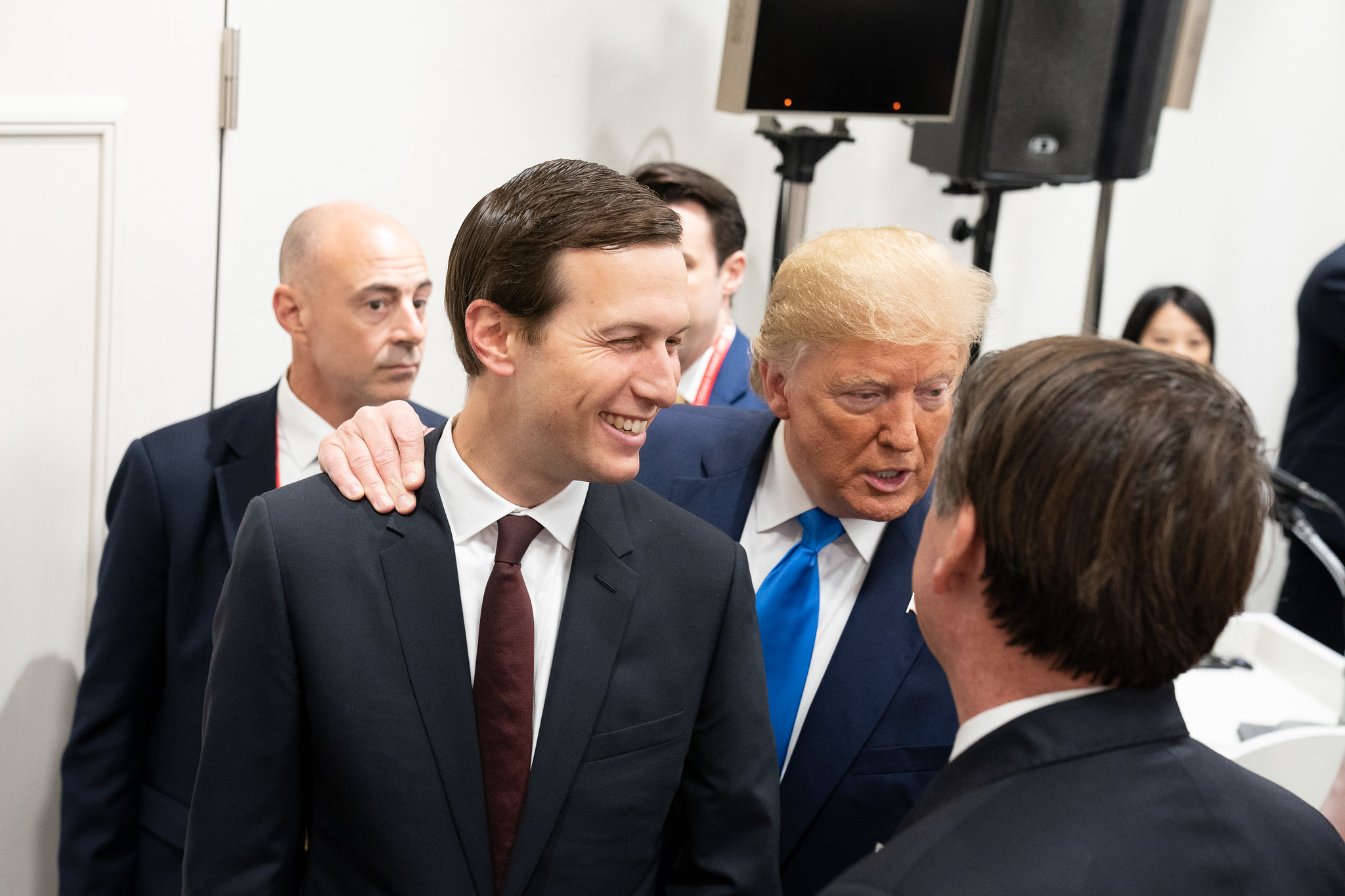 Jared Kushner’s new memoir discusses an April 2020 conversation between former President Donald Trump and Dr. Anthony Fauci: Trump wanted to end lockdowns during the COVID-19 pandemic, but Fauci advised that they should remain in place as long as possible.

Kushner goes on to describe Fauci as “a shrewd politician and smooth communicator,” giving context to the man who participated in Trump’s pandemic task force meetings but contradicted their findings in interviews with CNN and the Associated Press.

“Nobody rises to the top of a bureaucracy like the National Institutes of Health and survives six presidential administrations over three and a half decades without knowing how to self-promote, outmaneuver, and curry favor with the powerful,” Kushner writes.

Breaking History: A White House Memoir is a narrative about shrewd politicians and smooth communicators who know how to do just that. Kushner, Trump’s son-in-law and senior adviser, writes a book that spans genres, at times reading like a political thriller and, at others, a political treatise. As its title implies, the memoir shows that history, like the news, depends on crafting a narrative that makes sense in a political landscape otherwise rife with contradictions.

Kushner himself is a divisive figure among Trump supporters, as the former president has reportedly blamed his son-in-law for his election loss. His contradictory background and role in the White House manifest early in the book. Breaking History’s first three chapters chronicle events that shaped Kushner’s worldview: his father’s two-year prison sentence for illegal Democratic campaign contributions, tax evasion, and witness tampering; his Holocaust-survivor grandparents who, with his father, created Kushner Companies, which manages real estate worth billions; and meeting his wife, Ivanka, because of a potential real estate deal.

But for every story of rags-to-riches immigrants or Democratic donations, there are stories that make Kushner seem like even more of an enigma. Kushner’s father, for example, pledged $2.5 million to Harvard a year before he matriculated in 1999. In 2006, at 25 years old, Kushner purchased the New York Observer (now called the Observer), which occasionally leans right and has endorsed Republican presidential candidates from Bob Dole to Mitt Romney.

He describes his role as the former owner and publisher of the Observer as “an opportunity to bring a sophisticated paper into the digital age, while making helpful business connections in the process.” Similarly, Kushner’s time as a Trump campaign adviser emphasized a digital communication strategy and Kushner’s business connections. Breaking History’s other 56 chapters detail his winning ideas during the 2016 election. Kushner, for example, saw the value in using the virality of Facebook videos for cheap advertising and creating an online store for MAGA hats.

Kushner also used his business experience during his claimed accomplishments in the White House. These include his undertaking of the border wall construction, securing masks and ventilators during the pandemic, and brokering a historic peace deal in the Middle East. Kushner writes that he began border wall meetings with questions “typical of any construction project,” asking why the wall took so long to build and why it cost so much. When Kushner worried that military planes were a slower option for procuring COVID supplies, he turned to industry, making phone calls to the CEOs of FedEx and UPS to deliver gloves, masks, surgical gowns, and “other lifesaving supplies.”

The Middle East peace deal is the accomplishment that takes up the most space in Breaking History. After over three years of meetings, the Abraham Accords normalized relations between Israel and the Gulf states of Bahrain and the United Arab Emirates. (Sudan and Morocco followed with later agreements.) These long and nuanced passages resemble the kind of diplomacy that made the peace deal possible. Kushner recounts every strategic step from moving the U.S. embassy to Jerusalem to his back-to-back meetings with leaders in Bahrain, Saudi Arabia, and Turkey.

During one meeting with Saudi Crown Prince Mohammed bin Salman, Kushner discusses investing directly in the Palestinian economy rather than through its leadership. Kushner, after all, is a businessman, and his private equity firm later secured an investment of $2 billion from an MBS-controlled fund. These moments make Kushner seem like an apolitical figure, adopting policies for personal gain rather than their alignment with Trump’s agenda. Trump made frequent jokes calling Kushner a liberal, and Kushner had to convince Trump that the criminal justice reform bill that he spearheaded wasn’t a “liberal Jared” cause.

Kushner, however, is too skilled at politics to be an apolitical figure. Passages of dealmaking and diplomacy showcase strategy that rivals books by memoirist and former Secretary of State Henry Kissinger. Breaking History is a literary undertaking, often nodding to treatises like Kissinger’s Diplomacy and other genres that informed Kushner’s writing style. He titles some chapters after books (“Great Expectations” and “The Art of War”) and describes candidates in terms of what story they can tell. When Kushner reviewed files for three potential vice-presidential picks — Chris Christie, Newt Gingrich, and Mike Pence — he compared them, respectively, to a John Grisham thriller, a Danielle Steel romance novel, and the Bible.

He’s acutely aware of storytelling’s importance in the media, often using Trump tweets to pace his memoir. Other moments emphasize writing and rewriting speeches only to have Trump speak off the cuff or Kushner’s role in connecting Trump with his followers. He once asked to film Trump on his way to receive treatment for COVID at Walter Reed Medical Center (the media took the bait, covering Trump’s illness through his tweets and videos).

In the “Acknowledgements” section, Kushner thanks speechwriter Brittany Baldwin for helping him “put words to the experiences that have defined my life.” The wordsmithing from Kushner, Baldwin, and other contributors to the memoir could shape the narrative of what happened behind the White House’s closed doors. Breaking History certainly has its juicy tell-all moments, including the accusation that former chief of staff Gen. John Kelly shoved Ivanka. In another literary reference, Kushner describes Kelly’s abilities to charm and instill fear as his “Jekyll-and-Hyde routine.”

He also acknowledges how the media crafted its narrative by taking Trump’s comments out of context while ignoring his administration’s successes. For example, Democrats and the media fixated on Trump’s comment that the 2017 Charlottesville riots, which stemmed from a white nationalist protest, had “very fine people on both sides.” But the Trump administration made historic decisions benefitting Black Americans, including increasing funding to historically Black colleges and universities, realizing a record low for Black unemployment, and signing the Kushner-backed First Step Act, which impacts the disproportionately Black prison population.

Kushner’s memoir, as the preface notes, seeks to close the gap between the media’s perception of the Trump administration and his memory of events. In his own interactions with the media, Kushner is noticeably silent about Trump’s claims of fraud in the 2020 election and the Jan. 6 Capitol attacks. Perhaps he followed former President Barack Obama’s advice to Trump during a transition meeting, which Kushner recounts early in his memoir: “If you don’t answer their questions, they will stop asking.”

Kushner’s unclear position on Trump’s last days in the White House shows his abilities to outmaneuver, self-promote, and curry favor with the powerful. As Trump’s popularity surges after the FBI raid, it’s doubtful that Kushner will resume his roles as a campaign worker and adviser if Trump runs in 2024. Yet the same political savvy that made Kushner a constant throughout the administration would help him transition seamlessly from his new life in Florida back to the White House, whispering in the president’s ear.