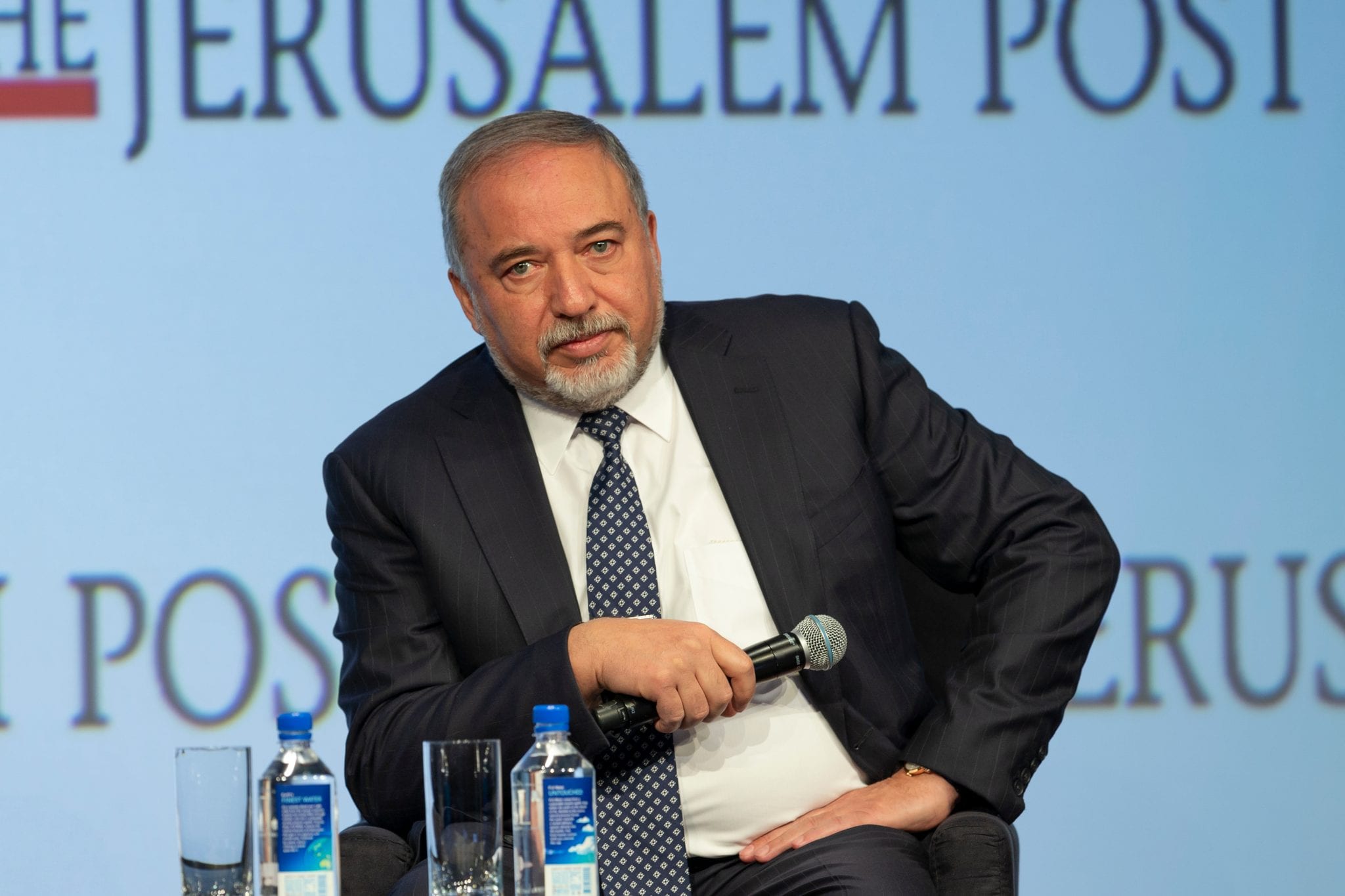 It is said that Jews are so opinionated that two Jews render three opinions.

We see from this week’s elections in Israel, timed perfectly for Rosh Hashanah season, that it is not true. For nearly seven million Jews, only 30 (or so) political parties are ample to choose from.

With Israel voting for a Prime Minister and a new Government — for the second time in three months, because enough of the various parties could not agree on forming a Government three months ago — the population of Israel now stands at approximately nine million:

With millions of Jews voting, you might expect millions of parties (plus one) to run. But the stereotype is not correct. In this election, voters have only 30 or so parties remaining from which to choose, barely the number of flavors that the Baskin Robbins ice cream chain advertises.

For non-Israelis, here are some examples of choices from recent elections that faced voters at the ballot box: 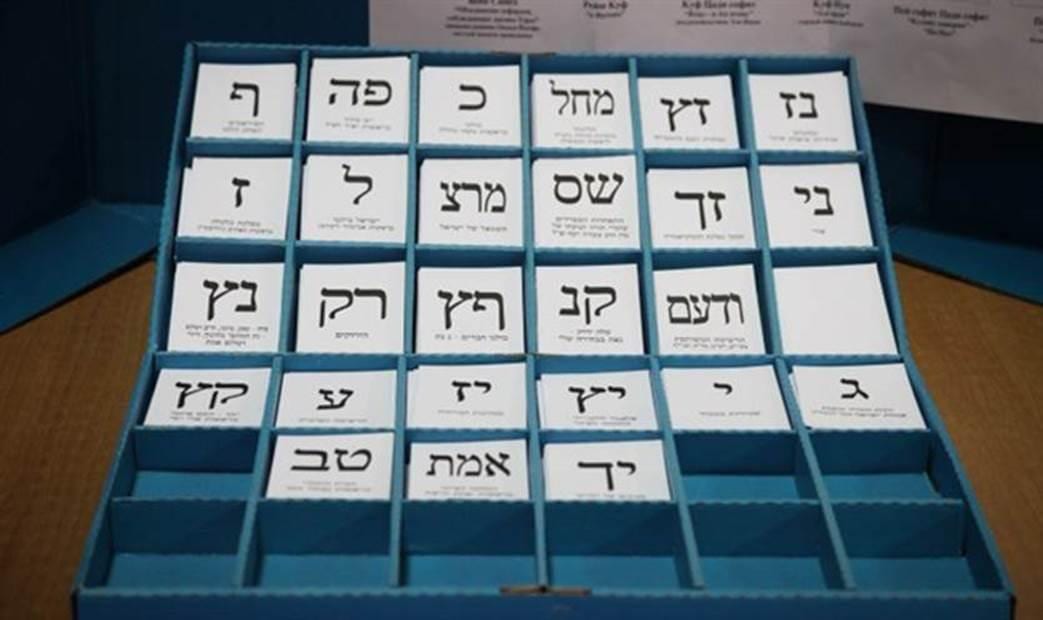 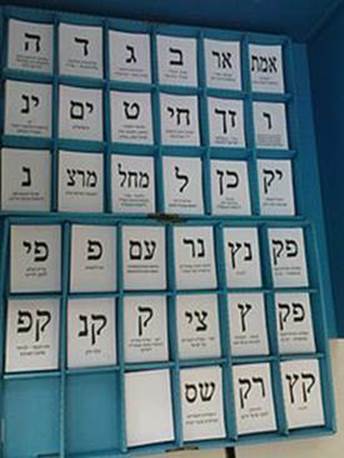 Who needs Putin and “Russian Collusion” to confuse the voters?

As for the election itself, the polls predicted that Benjamin Netanyahu’s center-right Likud will get 31 to 33 seats and so will the center-left “Blue & White,” which is led by a quartet of three generals (Benny Gantz, Gabi Ashkenazi, and Moshe “Bogie” Ya’alon) and a political pro (Yair Lapid). To their more determined left, the extreme-left Democratic Union–Meretz Party may get four to six seats, as may the dying Labor-Gesher Party. (Labor once was the powerhouse of Israeli politics, home to the likes of Golda Meir, Yitzhak Rabin, and Shimon Peres. Israel’s Jews have moved so far to the right over the past four decades, however, that the socialist and leftist parties that dominated half a century ago all are on the brink of extinction.) Nevertheless, because parties must get at least 3.25 percent of all valid votes cast — otherwise they are disqualified and all their votes are lost — it is possible that Democratic Union-Meretz, Labor-Gesher, or even both (!) may end up on the outside.

To the right of Likud, Yamina (a blend of secular political conservatives and Modern Orthodox religious Zionists) was projected to get eight to 10 seats. United Torah Judaism (Ashkenazic “Classic Old World” Orthodox) was expected to get seven to eight, as was Shas (Sephardic “Classic Old World” Orthodox). The Otzma Party (associated with aspects of the late Rabbi Meir Kahane’s teachings) was predicted either barely to miss the 3.25 percent cutoff and get nothing, with all their votes wasted and lost — or to eke in just barely at 3.25 percent … and thereby get four seats.

Separately, a merger of four Arab parties (known as the “Joint List”) was expected to come out with nine to 11 seats. And the “Joker Is Wild” — the Avigdor Liberman “Yisrael Beiteinu” Party (right-wing politically, but anti-religious theologically, comprised primarily of anti-Orthodox older people who came from the former Soviet Union) — was expected to get between six and 11 seats.

When the last votes come in, expect that the secular conservatives and theologically Orthodox may prove a bit stronger than the polls predicted. That little bit can make all the difference this time. In addition, the last votes that trickle in come primarily from soldiers on active duty in the Israel Defense Forces (along with overseas diplomats, hospitalized patients, and the like). That vote often moves the final tallies a bit to the right as well, so “it is not over until it is over.”

Actually, it is not over even after it is over. After the dust settles, the President of Israel, Reuven Rivlin, will select the head of Likud (Netanyahu) or the head of Blue & White (Gantz) to try to form a coalition. There will ensue weeks of horse-trading, where smaller parties demand seats as cabinet ministers and concessions on their key platform issues in return for agreeing to coalesce behind one or the other of the two largest parties. In the 120-seat Knesset, a Government will require the agreed-upon commitments of parties comprising at least 61 elected seats.

Since a bloc of parties combining the politically conservative with the theologically Orthodox aligning under Netanyahu’s Likud was expected to comprise 58 to 61 seats, they either will be able to form a coalition with just enough to govern without Liberman (if they tally 61), or they will be short a few seats. If they are short, Netanyahu will try to plead with individuals elected to the Knesset in Liberman’s party or in Blue & White to abandon their party in return for some personal payoff, like getting to be a cabinet minister or getting a chauffeur-driven limousine, extra staff, and a window office in the Knesset. (That is how Rabin formed the coalition that agreed to the Oslo Disaster, which gave Arafat a quasi-country and base in Judea and Samaria for terror operations, the “Palestine Authority.” Lacking 61 seats, Rabin convinced a few to abandon their parties and their stated beliefs in return for cabinet ministries, limos, and other personal goodies.)

If Netanyahu cannot cobble together 61, then Gantz presumably will be authorized by President Rivlin to try his hand. But he will not be able to reach 61 without Likud joining under him because his Blue & White Party, plus the Left parties, will comprise only 45 or so seats. Gantz will not want to invite the Arab coalition party into his coalition because many of them are Jew-haters or otherwise are running on overtly anti-Zionist platforms. Besides, even with them, he would have only 55 or so seats, and Liberman, at heart a right-winger, would be hard-pressed to sit with them to give them the 61. Likewise, Gantz cannot get to 61 if he brings in Liberman to join with his 45 or so, because (i) even with the Left and Liberman, he would get only to 55 seats if he does not also get the Arab coalition, (ii) Liberman would not fit with the Left anyway because Liberman’s voters are right-wing emigrants from communism, and (iii) the Left would not sit with Liberman (same reason) — although they do share a common antipathy towards religious Jews.

So Gantz’s only play would be to get Likud to agree to join in a “national unity” Government under his leadership. But Gantz, Ashkenazi, Ya’alon, and Lapid have one thing in common that led them to create their party: They all hate Netanyahu. So they never would sit with Bibi; rather, they would have to convince the other leaders of Bibi’s Likud Party to stab Netanyahu in the back and to dump him. Some of them probably would if offered cabinet ministries and chauffeur-driven limos and corner offices with large windows, but most would be afraid to do it because their careers would end when such a tenuous coalition would collapse.

So how will a government of 61 seats be formed? In April, this exact scenario resulted in no solution at all, leaving them with no choice but to hold another election. (And what is that thing rightly or wrongly attributed to Einstein about expecting different results?) So here is what probably will play out:

Either …
1. Somehow, the Right-Religious end up with just enough seats to make 61, based on a history of Israeli election polls regularly underestimating the results and strength of the religious/right by three seats or so.

Or …
2. The anti-religious Liberman and the “Old World Classic” Orthodox somehow will reach an understanding behind closed doors in order to avoid a third election at Chanukah time in December, which will have the same results. If that happens, with the right-wing Liberman joining a Likud-led government with the religious, a strong coalition of some 70 seats could be formed — until they get into squabbles in two or three years, when polls favor a party’s prospects if they break away and force new elections.

Or …
3. Netanyahu, though short of a 61 governing majority by two or three seats, will bypass Liberman and somehow will induce two or three self-interested sorts from Liberman’s party and the Blue & White to abandon their parties and join a new Likud government in return for personal payoffs like cabinet ministries, limos, corner window offices, and lifetime pensions.

The above may all sound very confusing, but this is the clearest explanation and analysis of Israel’s September 17 election that you will read. And this simple graph illustrates how clear it all really is: 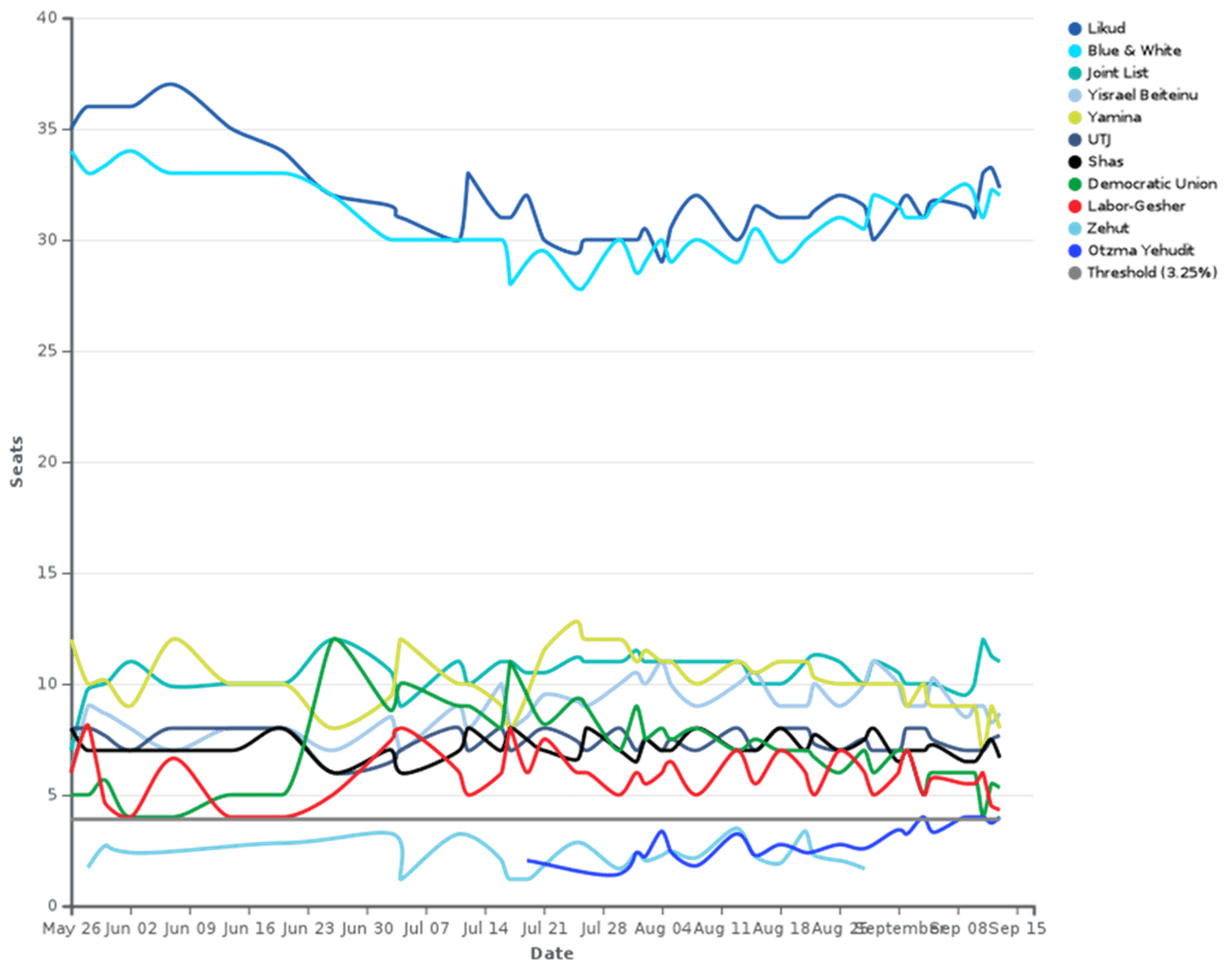