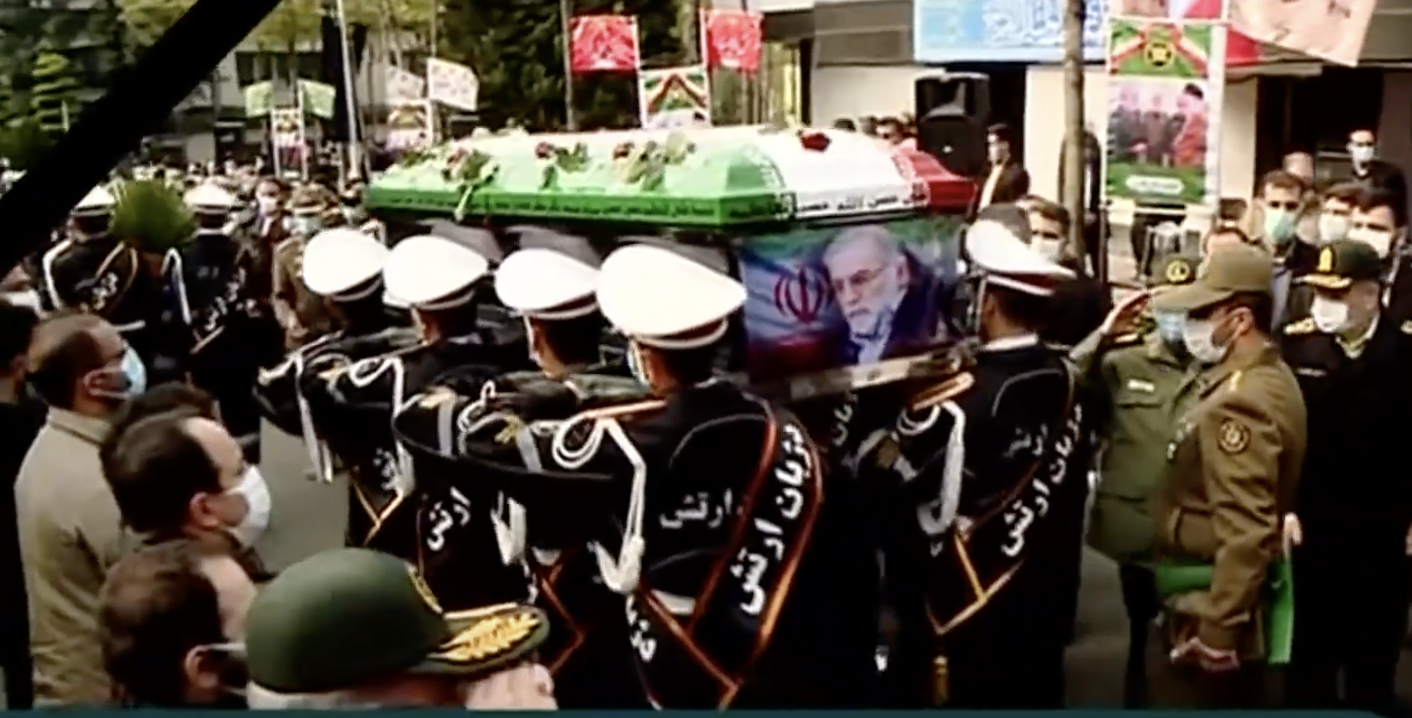 This weekend marked at least the fifth assassination of arch-terrorists in Iran in 2020 when Muslim Shahdan, a senior commander of Iran’s Islamic Revolutionary Guards Corps (IRGC), was killed while driving weapons across the Iraq–Syria border. This follows Friday’s assassination of Iran’s top nuclear scientist (and, less noted by the press, also a brigadier general of the IRGC) Mohsen Fakhrizadeh. There are at least three theories circulating as to the exact nature of the operation, be it an assassination involving remote-operated weapons, a small hit squad, or a larger hit squad. Bahrain, Saudi Arabia, and the United States have declared the IRGC a terrorist organization.

In August, al-Qaeda’s second in command was assassinated in Tehran, reportedly in a joint U.S.–Israel operation. In January, the United States assassinated IRGC major general and commander of the Quds force Qasem Soleimani, as well as Abu Mahdi al-Muhandis, commander of the Popular Mobilization Forces in Iraq and believed to be responsible for the 2019–20 attack on the U.S. Embassy in Baghdad.

The Fakhrizadeh assassination has prompted heavy-handed armchair quarterbacking from the usual suspects. Former CIA Director John Brennan called the assassination “a criminal act & highly reckless” on Twitter, implored Iranian leadership to exercise restraint, and called the assassination, in the event it was carried out by a foreign government (Brennan said he did not know if it was) “an act of state-sponsored terrorism.” Rep. Ilhan Omar (D-Minn.) supported Brennan’s tweet. Sen. Bernie Sanders (I-Vt.) called the assassination “reckless, provocative, and illegal” as well as “murder,” while Sanders’ foreign policy adviser, Matt Duss, accused Israel of “terrorism” and suggested that former Vice President Joe Biden, once in office as president, should re-enter the Joint Comprehensive Plan of Action (JCPOA) to teach Israel the lesson that “terrorism doesn’t work.”

But bluster aside, what are the implications of the Fakhrizadeh’s assassination? Who assassinated him, how will Iran respond, and what will this mean for Middle East peace?

Many of course suspect Israel assassinated Fakhrizadeh. In Prime Minister Benjamin Netanyahu’s April 2018 presentation in Tel Aviv on how Iran lied about its nuclear program, he (now infamously) stated, “remember that name, Fakhrizadeh.” Also in 2018, Former Prime Minister Ehud Olmert, who was prime minister of Israel when Syria’s fledgling nuclear reactor was destroyed, not-so-cryptically stated that with regards to Fakhrizadeh, “He does not have immunity, he did not have immunity and I don’t think he will have immunity.” Qatari media blamed Israel for Fakhrizadeh’s assassination and suggested that Israel received assistance from the UAE and Saudi Arabia in carrying out the attack. Iran Foreign Minister Mohammad Javad Zarif echoed this accusation, claiming on Instagram that the Untied States, Israel, and Saudi Arabia used their recent trilateral meeting in Saudi Arabia to plan the assassination. Interestingly, unlike the other five members of the Gulf Cooperation Council, Saudi Arabia has not formally condemned the assassination. Several journalists in the Saudi press have even praised the attack. Ali Shamkhani, Secretary of the Supreme National Security Council of Iran, claimed that the Iranian opposition group National Council of Resistance of Iran (NCRI) assisted Israel.

How Will Iran Respond?

Iran and its allies have sent mixed messages on how the country will respond to Fakhrizadeh’s assassination. Iranian President Hassan Rouhani has pledged that Iran would respond “in the proper time.” A senior Iranian nuclear energy official called on Iran to reduce the International Atomic Energy Agency’s access to Iran and leave the JCPOA. Sheikh Naim Qassem, Hezbollah’s current No. 2 leader, stated that Iran would respond to the assassination with a “limited attack.”

It is likely that Iran will attempt to retaliate short of war. Given its past behavior, Iran’s response will likely be one of the following:

Attacks on Israel through Iran’s proxies. Iran may heat up its proxy wars against Israel, either through Hezbollah in Lebanon or in a larger “Northern War” with proxies and/or the IRGC itself from Lebanon, Syria, or even Iraq. The Iranian newspaper Kayhan suggested that if Israel was found to be the culprit, Iran should target Haifa in such a way that “causes heavy human casualties.” This threat, also floated previously by Hezbollah, would likely come from one of Iran’s proxies. A leading Israeli think tank had projected in early November that there is a high likelihood that Israel will face war this year.

Attacks on Jews around the world. Jewish communities around the world are also concerned that they will be the target of reprisals. Iran has targeted Jewish communities abroad in the past. In what some analysts believe was in response to Israel’s assassination of Hezbollah cofounder Abbas Moussawi in 1992, and Israel’s capture of Amal’s head of security Mustafa Dirani in May 1994 (Amal is Hezbollah’s ally), Iran and Hezbollah orchestrated the 1992 homicide bombing attack on the Israeli embassy in Buenos Aires (30 dead, including the bomber, 242 injuries) and the 1994 AMIA Jewish community center homicide bombing attack in Buenos Aires (86 dead including the bomber, over 300 injured).

Attacks or increased sabotage efforts towards the Gulf states. Iran has “directly” threatened Abu Dhabi Crown Prince Mohammed bin Zayed, stating that Iran would attack the UAE if the U.S. attacked Iran. This may have prompted UAE’s condemnation of the assassination only hours later. Iran may also seek to ratchet up its attempts to sabotage Bahrain and the UAE for their normalization deals with Israel.

Attacks on U.S. soldiers and civilians. Iran retaliated for the U.S. killing of Soleimani by firing missiles at the Ayn al-Asad Airbase in western Iraq and the Erbil International Airport in Kurdistan, Iraq. While the missile attacks caused traumatic brain injury to approximately 110 U.S. soldiers, fortunately no Americans were killed.

What Does This Mean for U.S. Peace?

The recent attack will have significant repercussions for Middle East peace. While on the surface, the UAE and Bahrain have condemned the assassination, fear of retaliation and of Iran’s nuclear program will drive the United Arab Emirates, Bahrain, and Israel closer together. While Saudi Arabia may wait for a Biden–Harris administration to normalize relations with Israel, mutual fears of Iran will strengthen Israel and Saudi Arabia’s unofficial relations in the meantime. Saudi Arabia’s recent formal granting of overflight permission to Israeli airlines, while commercial in nature, should scare Iran — this could be an opening for military overflight permission to bomb Iran, which Saudi Arabia reportedly granted Israel back in 2008.

Increased tensions with Iran will drive the UAE to increase its efforts to finalize its deal with the Trump administration to get F-35s. Bahrain and Saudi Arabia will likely increase their efforts to purchase them as well. Fearing Iran, and with increased support from China, Saudi Arabia may even choose to go nuclear; Saudi Arabia presently might have enough uranium to produce nuclear fuel.

The Fakhrizadeh assassination will unfortunately push a long-shot Israel–Lebanon normalization deal further from the realm of possibility, as Lebanon will be less likely than the Gulf states to resist bullying from Iran.

The assassination will likely not halt Iran’s drive for obtaining a nuclear weapon. Rather, like the multiple previous assassinations of Iran’s nuclear scientists and the U.S.–Israel Stuxnet attack and subsequent sabotage efforts, the assassination slows Iran’s efforts and sends a message to Iran that the United States and Israel will continue to counter Iran’s nuclear ambitions. An incoming Biden–Harris administration should continue, rather than pivot away from, these sabotage efforts as well as the achievements of the Trump administration towards Middle East peace. Rather than keep its allies in the dark like the Obama administration did, a Biden–Harris administration should consult with the U.S.’s Gulf allies and Israel in any future negotiations with Iran.