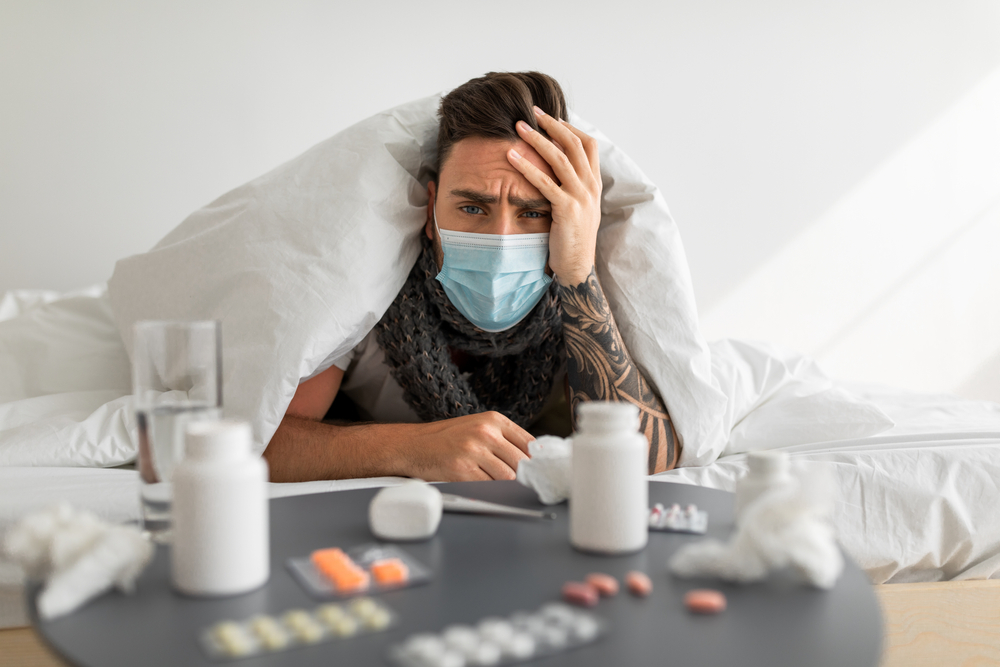 I have always despised the latest trends. It took me years to buy my first cell phone. Well into the 21st century, I finally started to watch the television series that everyone followed passionately in the ’90s. And now I’ve picked up COVID, just as it is becoming a viral relic. Yes, my friends, keep this column safe lest it turns out to be posthumous and you can cash in when you sell it for a ton on Wallapop in a few days’ time. Ever since it went mainstream, the coronavirus is no longer hip. I know. But I’ve picked it up now for the same reason I’m still wearing the same shoes that James Stewart wore in It’s a Wonderful Life.

After 24 hours bedridden, I have counted the 142 cracks in my bedroom ceiling, followed the travels of a tiny spider for hours, forwarded as many idiotic memes as possible, and carefully observed each of my toes, asking myself profound questions about human evolution that are beyond the scope of this article. My eyes are watering, my limbs are heavy, I’m coughing like an old Harley Davidson, I have a fever worse than Maria Sharapova’s physical therapist has, and my nose is running like a leaky faucet.

It has been at least two years since I was last sick with anything (which is logical, since we have been forced into a sterilized lifestyle), and I had forgotten this feeling of helplessness, this abandonment unto God’s will, this lesson in humility. My friends call wishing me to “Get well,” when deep down I know they are thinking, “With the amount he smokes, he’s a goner.” Word gets around and even ex-girlfriends write to you to say their last farewells, and you are left thinking, “Why didn’t you say goodbye to me like that before we started dating?”

Things being as they are, I refused to upload the picture of the test with its two stripes to any social networks. I know it became fashionable during the pandemic, but what can I say, my followers drink a lot, sleep little, and live very absent-mindedly, and more than one of them is more than likely to congratulate me on the pregnancy.

As I like to get to the bottom of things, I’ll admit that since I have a fever, all I can think about is Xi Jinping (and all his damn family), that genocidal bastard who secretly confined his own people while he deliberately exported this nasty virus to all corners of the Earth because he thought it would benefit his communist hell. I cannot begin to fathom how even the most decent world leaders have given up asking him for any kind of explanation, for the leakage of the virus from the laboratory, for exporting the sickness, and for not sharing basic information about its nature. Nor should we forget that the WHO, a flock herded by Xi Jinping, just as we were just discovering how China was exporting coronavirus carriers by the thousands, was more worried about the health crisis not leading to an outbreak of racism towards Asians. There was no such danger. My racism focuses exclusively on one Asian: Xi Jinping.

But I don’t want to sound so cynical. My life would be better if I didn’t have this muscle pain, yes, but in the end I’m telling you all this so that you, who will have already had COVID, will write me comments with the kind of things we sick people like to hear: “The symptoms disappear after 14 hours,” “If it hurts it means that your immune system is working wonderfully,” “After COVID you grow six centimeters,” and things like that. The internet is full of hearsay, but it is always easier to believe when you’re told firsthand. (READ MORE from Itxu Díaz: Against the Segregation, Torture, and Murder of Babies)

And, although it may not seem like it, I’m quite happy in spite of everything. As a journalist and writer, my ultimate life goal is to be able to spend the day in bed, ordering junk food online, and writing horizontally. And that’s exactly what I’m doing. That’s something I have COVID to thank for. That and the fact that no one has dared to visit me in this pitiful state for fear of being infected.