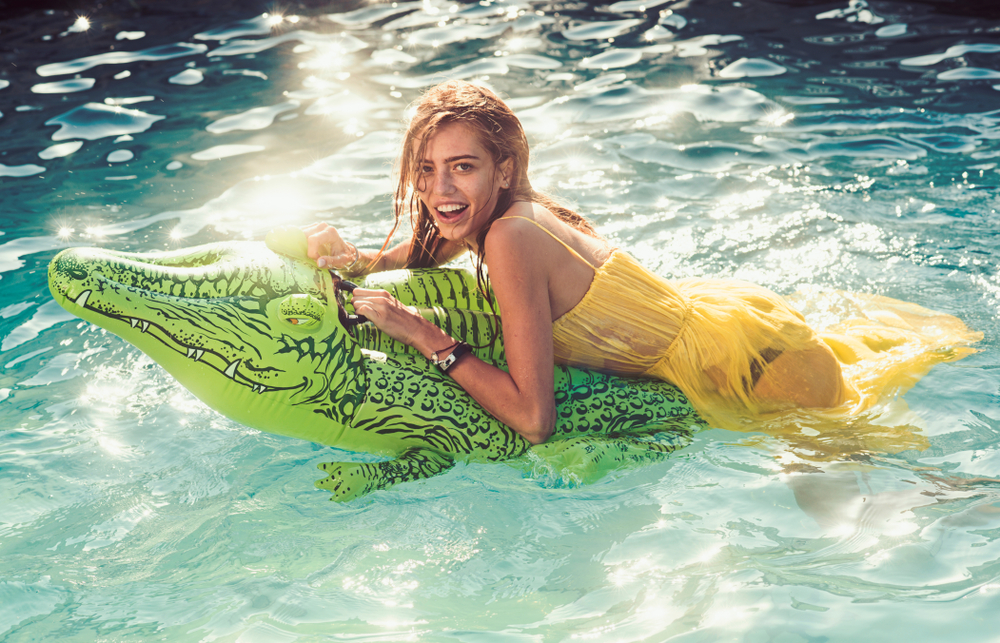 In summer we come across verbs that do not exist during the rest of the year. One of them is “to inflate.” In winter it is not necessary to inflate anything. The fireplace, books, and the PlayStation come already inflated. However, most of the leisure objects used during the warmer season depend on a fickle plastic valve through which we have to blow until we turn pale and, sometimes, die. Between blowing on airbeds, beach balls, and arm bands, summer is like a never-ending breathalyzer test.

One of the main causes of deaths on the beach among people over 20 years of age is the collapse of a rubber dinghy valve in the final stretch of the inflation process. All the air blown in is projected in the opposite direction. Thus, thanks to this type of accident, only in summer do we have the chance to see human beings inflate and finally explode on the shore. Apart from being a tragedy, it is one of the most unique spectacles that can be seen on a beach.

In the past, they used to sell us plastic balls that we inflated with lung power. But beach leisure has evolved, and little by little we have been pushed to buy mattresses, inflatable crocodiles, and even the floating lounge-dining room, with several armchairs with holes for drinks, and a central table with an independent valve. We could say that we used to inflate the toy manufacturers’ balls, but now it is the toy manufacturers who inflate our balls.

The key to good inflation is lung capacity. This can be achieved by asking your young, athletic nephew to blow in your place. But if you have to do it yourself, don’t make the mistake of believing the theory. Theory says you should blow gently but steadily. Reality says you’ll never finish. Blow through the damn spout with all your heart and without stopping to catch your breath, or you’ll never get that lump of plastic to slowly wake up and begin to rise into the shape of a paddling pool to the amazement of the little ones.

All of these plastic gadgets have an obnoxious element: the valve. Its mechanism has become much more sophisticated over the years. The valves of our childhood were a simple hole. When inflating a ball, it was necessary to intersperse the blows with the ability to retain the air inside, either with a neutral blow — like engaging the clutch at a traffic light on a slope — or with a powerful and vigorous tongue maneuver, capable of obstructing the air outlet of the ball while you refill your lungs with air. As far as I have been able to see, those who have this ability are also capable of tightening screws and typing at high speed on typewriters with their tongues. I have known several cases. Especially in the beef industry.

Since the 1990s, the valve has included a device that makes it difficult for air to escape during inflation. It is a plastic shutter that is activated when the air tries to rush out, frustrating its escape. I know it all sounds fantastic, but the trade-off is not a minor one. The existence of that tab forces the puffer to overcome its brutal resistance with every puff. Among the advantages of using this device is the enlargement of cheek capacity, which later helps one to portray Louis Armstrong perfectly at costume parties.

This is a device that prevents you from hurting your lungs in exchange for hurting your arm. There are also foot inflators. The next day you will feel as if you had climbed Everest on a bicycle with a single pedal.

Much more convenient than the manual inflator, it has the advantage of allowing you to avoid carrying airbeds, giant crocodiles, family pools, and other inflatable junk to the beach completely. That’s because most of the children’s toys inflated with this device burst. And watch out for the shock wave: My neighbor Eliodoro’s beach ball suddenly burst in the summer of 2005 when he was inflating it with this device while petting his little dog in the backyard. Last week he got a call from the International Space Station. They had found Toby. Orbiting.

For decades, the giant inflatable crocodile has enjoyed huge popularity at beaches. There are many crocodile lovers. There are people who do not understand our passion, who do not know how to appreciate the pleasure of riding a crocodile, letting themselves be carried away by the waves, and ramming the other swimmers to the cry of “Crocodile, crocodile!” We crocodile people are hilarious.

There is nothing on the entire beach that sails worse than a green, meter-and-a-half-long crocodile. And yet there is nothing that arouses more passion on the whole shoreline. All of us who carry green crocodiles have gone through the ordeal of inflating them, all right, but we all recognize their incredible benefits for resting the body and mind, as well as the spectacular success the crocodile’s owner achieves with the ladies.

Of my 974 first girlfriends, 973 were anonymous bathers who fell for the charms of my beach crocodile. The 974th eloped with another guy who had a bigger crocodile. I do not hold it against him. The crocodile I mean.