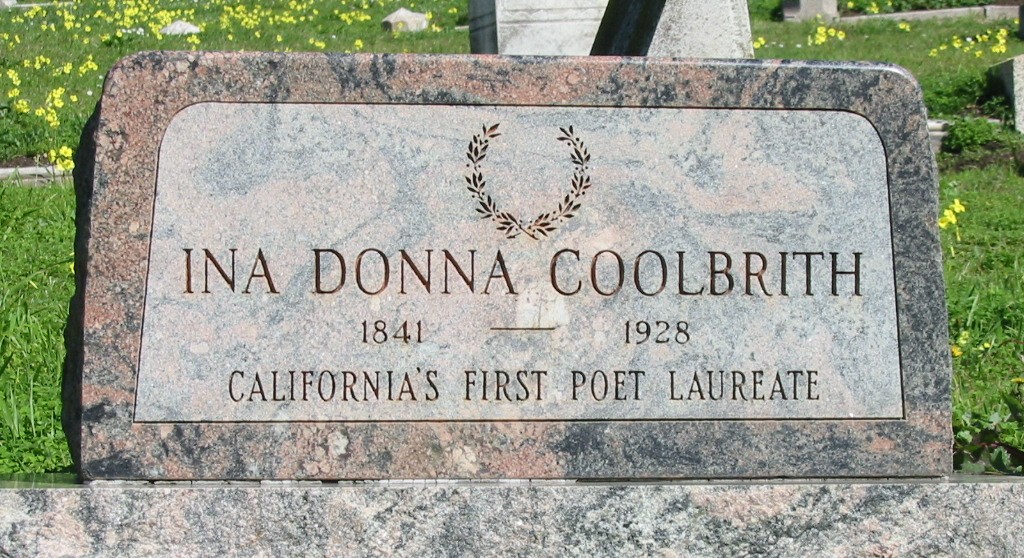 I once lived in Northern California near a local landmark, a mountain named Mount Ina Coolbrith. It’s in the northern Sierra Nevada, and its eastern slopes border the sagebrush country that extends into Nevada. Back then, I often wondered who Ina Coolbrith was. Well, for one thing, she was California’s first Poet Laureate.

Coolbrith was born Josephine Donna Smith to Don Carlos Smith and Agnes Coolbrith Smith in Nauvoo, Illinois, in 1841. Nauvoo was built by the ever-migrating adherents of the infant Church of Jesus Christ of Latter-Day Saints, otherwise known as the Mormons. She was a niece of Joseph Smith, the sect’s founder, who was destined to be murdered by a mob in 1844. “The Saints” were driven from Nauvoo, and the town and its new temple were burned.

Coolbrith’s family left the church and instead of making the famous final trek to the Salt Lake Valley resided in St. Louis for a number of years. Agnes resumed using her maiden name, as did “Ina” (a nickname short for Josephine). In 1851, they went west and were part of a group that crossed into California guided by James Beckwourth through the pass that would later be named after him. The historically noteworthy mountain man let the 10-year-old future poet ride on the front of his saddle while he regaled her with the tall tales for which he was famous.

Eleven years of growing up in frontier Los Angeles provided Coolbrith with a good education and a marriage to (and quick divorce from) an abusive carpenter named Robert Bruce Carsley. She also read Shakespeare and Byron and began to write poetry.

In 1862, the family moved to San Francisco, and for 21-year-old Ina the best reason for that was that the Gold Rush–era boom town was full of writers. Her first poems were good enough to appear in The Californian, a magazine edited by Bret Harte, short story writer and bard of the gold camps. The Harte connection led Coolbrith to a meeting with Samuel Clemens, whose byline “Mark Twain” was slowly building a literary legend. In 1868, her work first appeared in the Overland Monthly, which became San Francisco’s premier magazine.

Coolbrith’s verse was definitely influenced by the English Romantics, especially the pastoral musings of William Wordsworth. It’s almost as if she had never heard of Walt Whitman. The following, from a poem titled “After the Winter Rain,” reads like a description of the English Lake District transported to the California coast.

Softly the waves shall come
Up the long, bright beaches
With dainty flowers of foam
And tenderest speeches …

By the early 1870s, Coolbrith hosted a salon for the city’s literati in a sprawling home on Russian Hill. She added the caustic journalist and short story writer Ambrose Bierce to her coterie, along with Joaquin Miller (author of a critically applauded collection of poems entitled Songs of the Sierras, published in 1871), to whom she has been romantically linked.

After suffering some financial difficulty in 1874, Coolbrith moved to Oakland to take a position in that city’s public library. She would work there for 18 years, and there in the mid-1880s she met an intellectually precocious 10-year-old named Jack London. Coolbrith introduced the future literary giant to the classics and guided his reading. Years later, London wrote her a letter of thanks: “I named you ‘Noble.’ That is what you were to me — noble…. No woman so affected me to the extent you did. I was only a little lad.”

In 1883, Coolbrith had the misfortune to have her work commented on by her friend Ambrose Bierce in the pages of The Wasp, a little magazine that he edited. “Bitter” Bierce’s typically scathing review certainly destroyed their friendship. He zeroed in on one poem, titled “Unattained,” and attacked “this dainty writer’s tiresome lugubriousness.” For this, Coolbrith detested Bierce for the rest of her life (near contemporaries, she outlived him by 14 years after he mysteriously disappeared — in his 70s — in Mexico in 1914 while covering its revolution). To be fair to Bierce, he also used his piece to denigrate the Overland Monthly, where the poem had appeared, referring to it as the “Warmed-Overland Monthly.” Such was the quaint state of literary snark in 19th-century San Francisco.

Fired from the Oakland Public Library in 1892 over office politics, Coolbrith moved back to San Francisco. The author and naturalist John Muir got her a job as the librarian at the Bohemian Club, a writers’ and artists’ mecca. This career change didn’t pay much, but it offered her more time to write poetry, which had suffered somewhat during her Oakland sojourn. This from “Discipline”:

So, o’er the human heart
The countless griefs that roll,
But wake immortal joy
To bloom within the soul.

In 1906, the great San Francisco earthquake destroyed much of the city, with fires incinerating whole neighborhoods. Coolbrith’s house burned to the ground, and, devastated, she could only observe it from a great distance. The loss of memorabilia of 19th-century literary San Francisco was great. Coolbrith lost letters from writers, personal manuscripts (including a book-length history of California literature she was working on), and a library of 3,000 books, some inscribed by the likes of Twain, Harte, London, and Bierce.

Then 65 years old, Coolbrith moved back to Oakland, essentially in retirement, though she continued to write. In 1915, she was named California’s first Poet Laureate, an honor unheard of on a state level, and her elevation prompted other states to follow suit with their own writers. It also offered her a modest stipend to live on. The young Ansel Adams photographed her in 1923, five years before her death at age 86. The portrait showed a calm, wizened woman, one who had walked among giants in a land where “the grand hills, summer-crowned/ Slope greenly downward to the seas.”