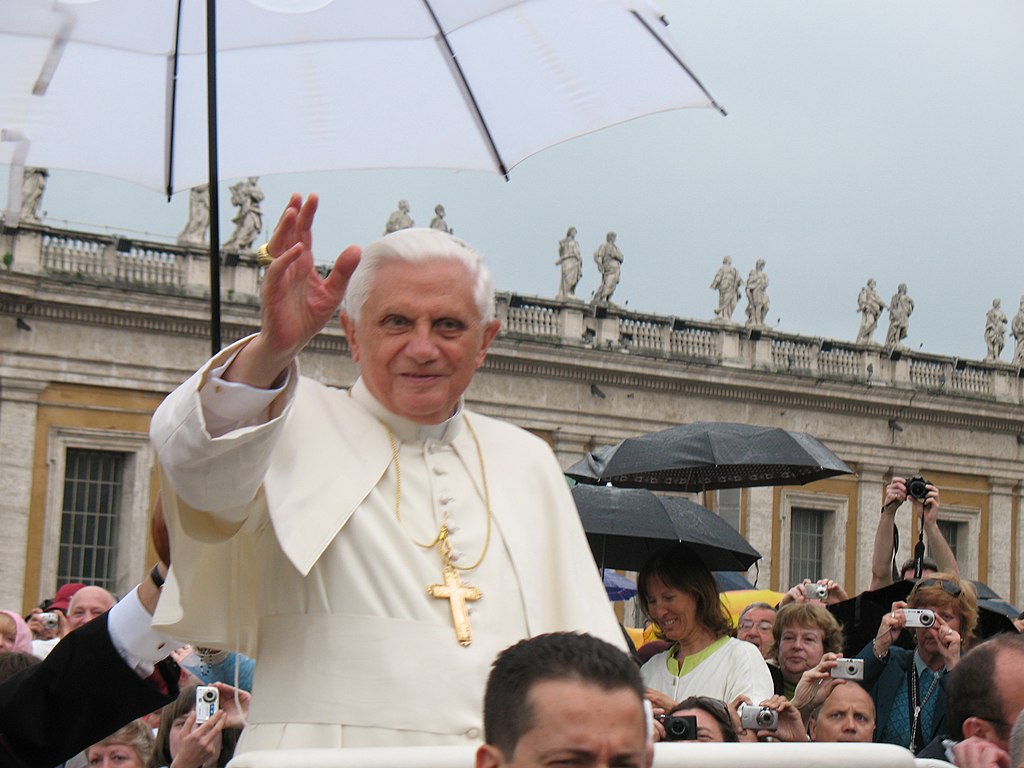 The man who was likely the most important intellectual of the last century has died. And it is also likely that it will take us a long time to realize it. Pope Benedict XVI died just as he lived, because according to his nurse, his last words were just a whisper: “Lord, I love you!” Sometimes, the voluminous and astonishing complete work of an author can be summed up in a single sentence.

As Supreme Pontiff, Benedict XVI had the difficult task of filling the shoes of the charismatic St. John Paul II, the artist pope, a master of humor, and a man whom the Holy Spirit had blessed with an evident gift of people skills. Although I was very fond of the Polish pope, I soon identified myself with Benedict XVI’s likable shyness, which is the sobriety of the intellectual. All this I say without wishing to enter into sterile debates, because for a Catholic, comparing popes is like comparing Mom and Dad.

Benedict XVI was overwhelmed by the revelry of World Youth Days, which John Paul II enjoyed immensely. Yet both equally loved their fruits. And while the young people chanted his name and danced, Benedict XVI just smiled, while he seemed to be a bit absent, thinking about the title of his next encyclical. No pope is stripped of his human condition, and Benedict XVI’s condition was to be an intellectual, the greatest of all theologians, the light of a Church more in need of lights than ever. The Catholic Church would be in a better place if all priests were able to read the works of the pope emeritus.

One of the great virtues of the intellectual Benedict XVI was his ability to simplify the theologies and philosophies of even the most complex authors. With an almost supernatural abstraction, the pope emeritus penetrated with ease texts that are like jungles for the intellect, pondered freely, with the resolve of one who carries doctrine as deeply imbedded in the soul as faith, and finally expounded them in his own texts in a simple and accessible style, but always rigorous and full of references for those who wished to delve deeper.

I hold against him an amusing little grudge for having caused me more than one headache trying to introduce us into the most diffuse chasms of theology. But it is those headaches that, deep down, make you feel that they were worth it.

Another lesson we can draw from the life of Benedict XVI is that Catholics should never pay the slightest attention to what the anti-Catholic press has to say about the life of the Church. When Benedict XVI was unknown to much of the world, the progressive press — and not only the progressive press — took it upon themselves to announce the arrival of a Catholic extremist in the Vatican. Someone who, in the opinion of people who had never seen a cassock outside of a movie, was entering the papacy intent on turning the Catholic Church into a “hammer of heretics,” an expression that I read at the time in a European newspaper and made me conclude that the first heretic to be hit, and on the head, had been the journalist himself. I guess that what they really meant was that they found it intolerable that the Church should continue to elect popes who are against abortion. That is where fundamentalism begins and ends for this legion of illiterate journalists who do so much harm to the world, who are so quick to label an intellectual of Benedict XVI’s stature without having read a line of his entire work.

Benedict XVI, of course, was no radical. Rather, he was the pope who did the most to bring closer together two currents that had become irreconcilable in recent centuries: faith and reason. The truth is that, had they read Benedict XVI, these progressive commentators would not have liked this either, because after all, they always prefer to depict religion as the province of illiterates. Thanks to Benedict XVI, theology experienced a second youth, more Christians became interested in how reason can bring us closer to the feet of God, and how the experience of faith can help us understand the world around us.

The last years of Benedict XVI are an example of humility and holiness. The various maneuvers to manipulate his words in these last years of silence came from all directions, but they simply failed. Even in the last thread of lucidity he acted with rectitude, with loyalty, with love for the Church, with love for mankind. His work is a treasure for Christians, but also for anyone who wants to better understand the world and the heart of man. Upon contemplating his life, his legacy, and his example, one prayer alone fills the mouths of Christians today: thanks be to God!

Itxu Díaz
Follow Their Stories:
View More
Itxu Díaz is a Spanish journalist, political satirist, and author. He has written 10 books on topics as diverse as politics, music, and smart appliances. He is a contributor to The Daily Beast, The Daily Caller, National Review, American Conservative, and Diario Las Américas in the United States, as well as a columnist at several Spanish magazines and newspapers. He was also an adviser to the Ministry for Education, Culture, and Sports in Spain.
Most Popular
1
At Large
The Lingering Fog of War and Lessons From Vietnam
by Mark Moyar