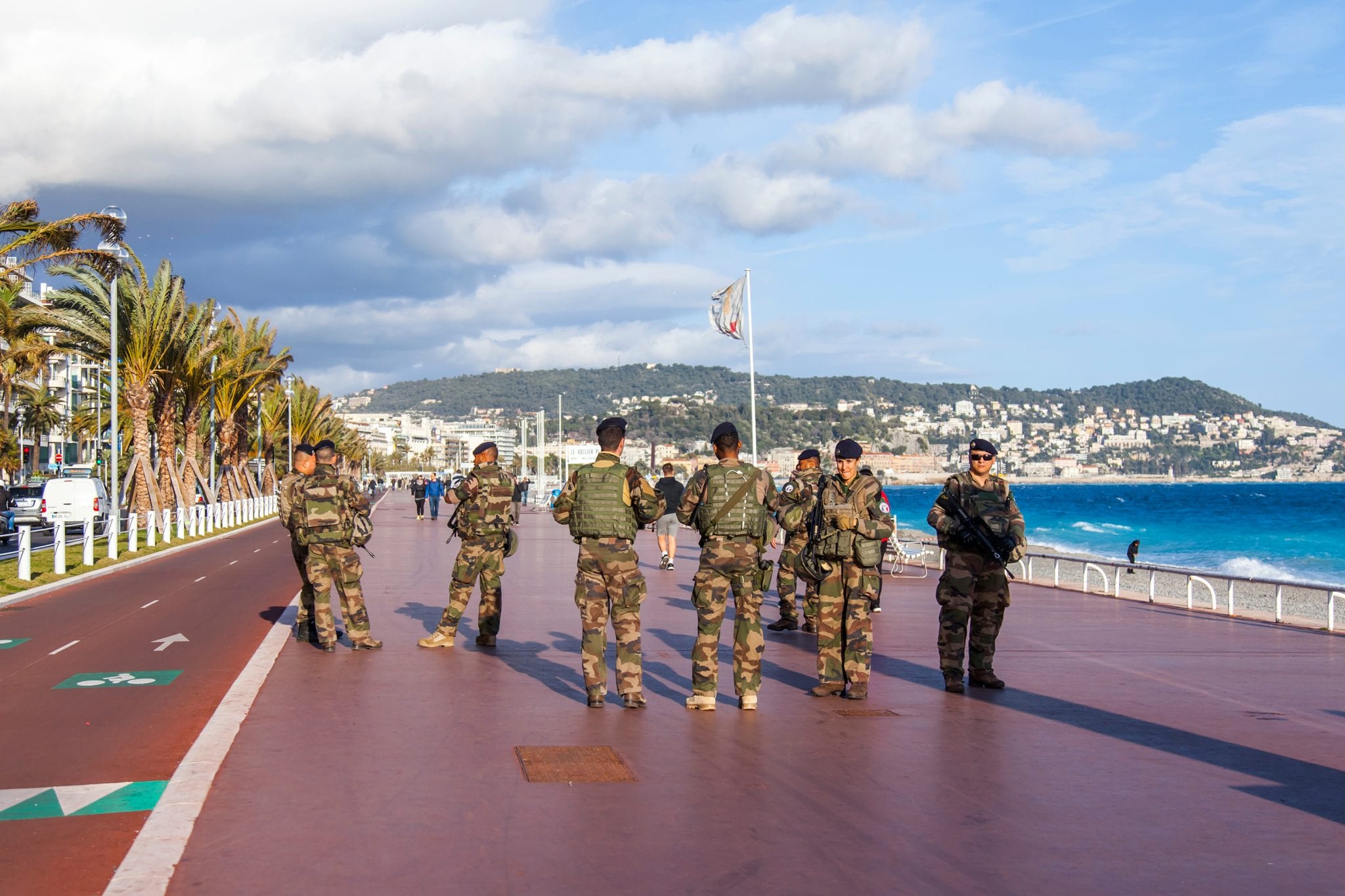 On April 7, 2017, in Stockholm, Sweden, Rakhmat Akilov, a Muslim immigrant and asylum-seeker, stole a beer truck in the heart of the city’s shopping district. Did he have a keg party in mind? No. Alcohol is forbidden in Islam. The killing of “infidels,” however, is not, and that is precisely what Akilov had in mind. Circling the block, he careened down a fashionable pedestrian lane. Before the rampage ended, five people were dead and 14 others injured.

A few weeks later, I walked from my hotel to the street in question. There was little to signal an unknowing visitor to this place that anything out of the ordinary had ever happened here. It was all so normal, so business as usual. Sitting at a sidewalk café, I tried to imagine the scene unfolding before me. With so many window shoppers and cyclists on this strip, it wasn’t difficult to picture the terror at the too-late realization that the truck bearing down on them had no intention of stopping.

My coffee finished, I walked the length of the street from where the carnage began to the corner window of the Åhléns department store where it ended. Plywood took the place of glass and people covered it with Post-it Note messages, turning it into an extemporized memorial. Some of the notes were nonsensical. Others spoke vaguely of “love conquering” or “love winning.” What that means in the context of a terrorist attack is not clear. Still others, however, identified the source of the problem: “Leave Islam,” declares just such a note.

But they mostly don’t get it.

Reversing course, I headed back up the street and went to several businesses along the terrorist’s bloody route asking shop owners and their employees what, if anything, they saw of the attack on that awful day. One said he was on vacation. Another told me (nervously) he was in a back office and saw nothing. One woman just shrugged.

Then I met Lily.

Lily is a twentysomething who works the counter at a cosmetics boutique. At the time that I walked in, we were the only two people in the store. Her blond hair framed a striking Nordic face and pale blue eyes. She might have been a poster for a Swedish vacation or a member of Abba.

Then I asked about the attack.

The customer service veneer immediately evaporated and was replaced by a deep pathos. Such a look, indescribable really, seemed incongruous with such a lovely face and on one so young. In impeccable English, she described the horror of that day.

Lily was upstairs with a customer when she heard tumult from the street below. Turning to look out of the window, she saw the truck driving down the lane at high speed. Some people were running; others were motionless. As the truck passed only feet from where she stood, she saw, behind it, the broken form of a boy lying in the street. A woman was kneeling over the child when a man sprinted in, swept up the boy in his arms, and disappeared into a side alley. A father? A bystander? Lily didn’t know.

The women hurried downstairs. A young intern who worked on the ground floor was hysterical. “She had seen a lot more than I had. Crushed bodies and blood. It was unimaginable.” The four of them locked themselves in a tiny bathroom behind the counter. They called the police and waited fearfully, listening, hoping for salvation. Two and a half hours later there was a knock on the storefront glass. The women cracked the bathroom door just enough to see a man in a black uniform, black body armor, and carrying an automatic weapon.

They closed the door abruptly and locked it again. Was he one of the good guys or a terrorist? They didn’t know and chose to stay put. Calling the police again they described the intimidating figure and were told to let him in. Cautiously they abandoned their refuge.

“He looked pale, terrified,” she said. “He was very young. I had no confidence that he could protect us.”

But that day’s terror was over. She thinks about it a lot. “People can be so evil,” she observed thoughtfully. “The man [who did it] was married and had children, yet he targeted women and children. Why would he do that?”

The answer seemed obvious to me. I offered a clue: “Do you think his religion had anything to do with the attack, Lily?”

To this point, she spoke freely, passionately, articulately. But not now. Now her response seemed like a statement prepared by the European Union’s Strategic Committee on Immigration, Frontiers, and Asylum (SCIFA): “Not for me,” she said somewhat nervously. “I don’t think religion is like that. For him maybe, but not for me.”

Shortly after the 9-11 terrorist attacks, I was granted a special pass to enter the perimeter of cordoned off blocks within which the World Trade Center towers had formerly stood. Standing atop FDNY Ten House, the home of Engine 10 – Ladder 10, the men of that station described what happened and what was now taking place in the rubble below. An unnatural smell still hung over these 16 acres like the pall of death. The impression that day, that moment, left on me was profound and enduring.

Since that time, I have visited the sites of many other Islamic terrorist attacks:

This is not an exhaustive list of terrorist attack sites; they are just the ones I have personally visited. In each place on my macabre tour, I asked people the same question I asked Lily:

“Do you think his [or their] religion had anything to do with the attack?”

With the exception of the New York firemen, London taxi drivers (who don’t give a damn what anyone thinks of their opinions), and the Nigerian Christians, the answers were always the same as Lily’s. Islam, they have been told again and again, is a religion of peace, and they were simply unwilling — or unable — to acknowledge the obvious.

To put this in some perspective, were I to ask any educated person what inspired kamikazes, the suicide bombers of the previous century, to fly their planes into American ships during the Second World War, they would undoubtedly say Emperor worship and the militarism of Imperial Japan. So why the inability to make the connection between terrorism and Islam?

In post-Christian Europe, where Rousseau’s view of human nature (i.e., we are born good) has replaced the biblical view (i.e., we are born corrupt); evil is understood to be merely a religious construct; and secularism is not only the de facto paradigm but an entrenched ideology, few Europeans have the intellectual framework to understand an absolutist religion like Islam. In the secular mindset this life is all you get, and almost nothing is worth dying for, certainly not religion. Consequently, those answering my question either responded with puzzled looks as if the question itself had no meaning, or they dismissed the attacks as the irrational acts of the mentally disturbed. That they might have been inspired by an ideology deeply at odds with traditional Western ideals and rooted in a belief in eternity simply didn’t enter into the discussion. The terrorists just had to be crazy or poor or disenfranchised. The things they did were somehow our fault, provoked by our racism or imperialism or failure to assimilate them. Better dialogue and mutual understanding will overcome.

Some will object that I am demonizing all Muslims. I am not. My point is not that all Muslims are terrorists or would-be terrorists. It is, rather, that their religion has a disproportionate number of adherents who believe the words of Surah 8:39 are absolute truth and their duty to fulfill, violently and at the cost of their lives if need be:

“And fight them until there is no fitnah [i.e., worship in anything other than Allah] and until the religion, all of it, is for Allah.”

In her answer, Lily — so bright, so wounded and victimized by the events of the April 7, 2017 Muslim terrorist attack in Stockholm — revealed that whatever she has learned about human nature and its capacity for evil, she had not learned the most obvious lesson of all: that some religions and some philosophies exacerbate that evil and give justification to it.

In this, however, Lily is not alone. It is the answer almost everyone gives to my question. Unfortunately, it is the wrong answer, and until we understand the ideology driving these terrorist attacks, then this terrible history of violence will continue to repeat itself.

Larry Alex Taunton is an author, cultural commentator, and freelance columnist contributing to USA Today, Fox News, First Things, The Atlantic, CNN, and The American Spectator. In addition to being a frequent radio and television guest, he is also the author of The Grace Effect and The Gospel Coalition Arts and Culture Book of the Year, The Faith of Christopher Hitchens. You can subscribe to his blog at larryalextaunton.com.