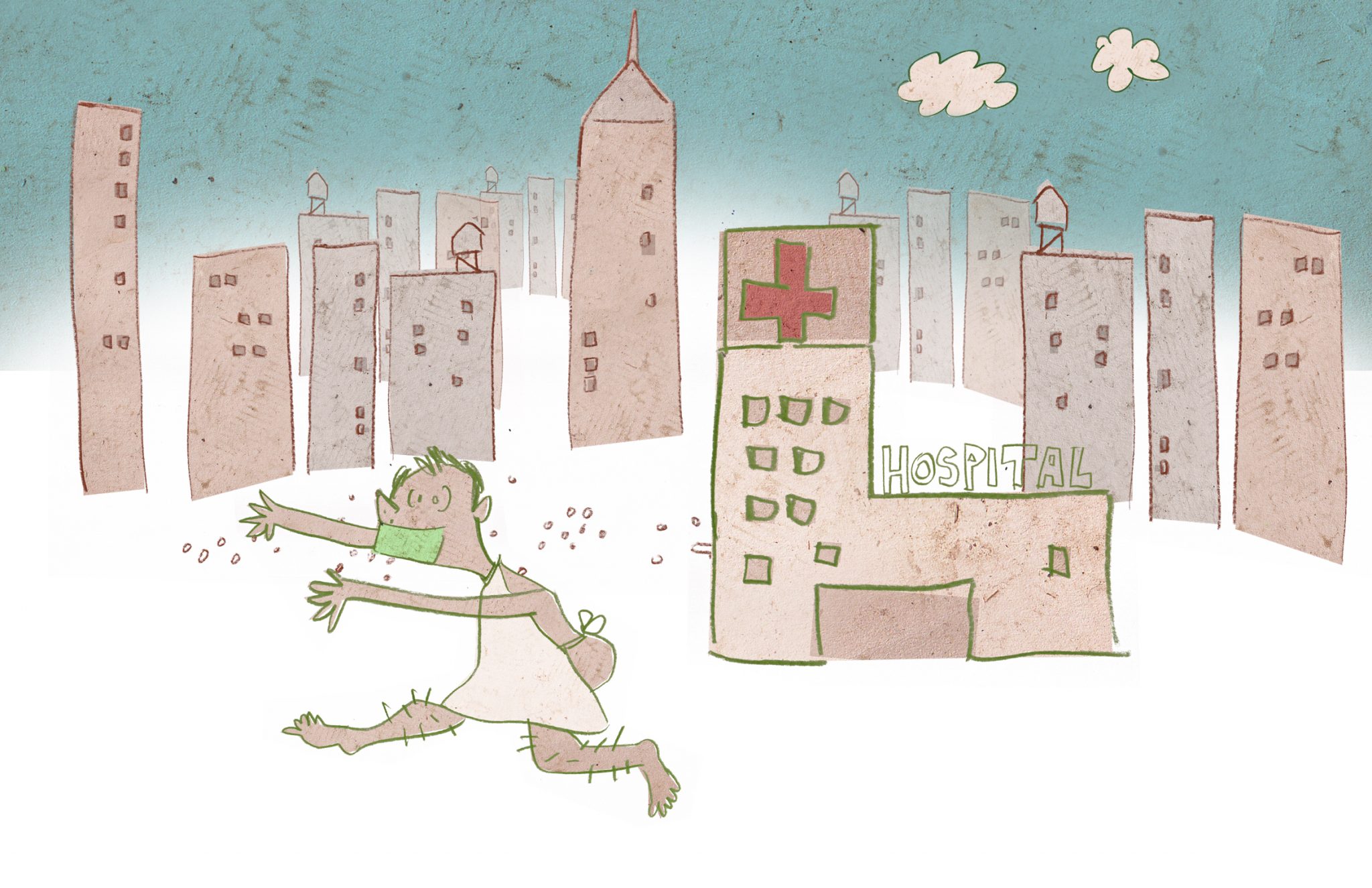 I grin like the Cheshire Cat behind my mask. I sign the papers without reading them. I’m used to checking in at hotels, but doing so in a hospital makes me feel a little queasy. While at a hotel the norm is to see men dressed in black, rushing around as they turn up late for everything, and Central European tourists queuing at reception and taking pictures with the maintenance guy, at the hospital stretchers whizz by at high speed with nurses carrying dying or mutilated people while they comment on whether they will go for the fillet of fish with a side salad or the hamburger later on. Sometimes the sick and injured amble in on their own, and that is even worse. A while ago I saw one pass by with his leg in one hand and a chainsaw in the other. Common sense is an alien concept to ER reception desk bureaucracy.

“Tell me what’s the matter,” says the young receptionist as she takes three phone calls and types the data from the previous patient into the computer.

“What do you think?” exclaims the injured man, waving his leg and revving up the chainsaw a couple of times as if it were a Harley.

The waiting room is full of people who don’t seem to be at their best. No one has moved our bags, and the receptionist, when I asked her about the welcome cocktail, pointed me to the little bottle of hydroalcoholic gel. Talk about cask strength. Some gazes lock awkwardly while others prefer to stare at the tiles. There is a lady who actually looks pretty healthy, on the phone with her family, stating the obvious: I am at the hospital, there are lots of people, some days there are fewer people, some days I am not at the hospital.

Another patient seems unable to stop fidgeting with some particularly noisy plastic bags, while he shakes a huge bottle of yellow liquid. It appears that I am quite a magnet to men with bottles of urine in waiting rooms. They always end up sidling over to me, intent on fraternizing and delving into the details of their accomplishment, commenting on the biological advantages males have for filling urine bottles without using their hands. It’s a topic I’m passionate about. At least I am if the alternative is holding the mutilated man’s autonomous leg for him while he looks for his cigarettes.

The waiting is starting to make me restless. It’s a festival of coughs and sneezes. The coronavirus must be rubbing its hands together. I don’t know how much longer I can hold my breath. There’s an octogenarian woman next door hyperventilating, and I’m not sure if she’s going to faint or give birth to a grandchild.

From my extensive experience in hospitals, I concluded long ago that it is much more dangerous to be a companion than a patient.

I concentrate on trying not to see any blood, but there are days when hospitals are real butcheries. Faces can’t get any longer. Getting sick at Christmas is like being the turkey at dinner. The girl in reception calls us over, and I spend half an hour going over the papers. I’m not the patient, I’m the companion, but receptionists run more identity checks on those who ask for the WiFi password than on those who come to get a kidney transplant.

The room they have given us is spacious and bright. I write crouched in the bathroom, which is bigger than the rest of the room, and allows me to do it on sheets of paper and not on the backs of old business cards. I practice the ancient art of writing in the air, which consists of writing without touching anything. I suspect that in every corner of this bathroom there is a miniature zoo. The viruses and coronaviruses in these places, moreover, go crazy when a healthy guy shows up at the door, fed up with delicate, sickly victims that they can hardly take advantage of.

There is nothing worse than being the companion. Doctors look down on you and pretty nurses don’t even look at you, but the bacteria hugs, and cleaning ladies mop your feet. From my extensive experience in hospitals, I concluded long ago that it is much more dangerous to be a companion than a patient. Bear that in mind the next time you have sentry duty.

As a rule, in hospitals you always want to stay hidden. As a companion, it is best to keep confined to the room, and if you have to move around outside, I advise you to push up against the walls. It’s the most dangerous in the areas more densely populated by the white coats. There is little time in the ER, and decisions are made in a split second. They tell me that a couple of weeks ago they operated on one of the cleaners. She was scrubbing an operating room. The surgeon and his team were scheduled to remove a fibula from an adult woman. The anesthesiologist didn’t hesitate to put the only person who was around at the time of the operation to sleep. No one was surprised by a patient scrubbing the floor because in a hospital no one is surprised by anything. You can walk around with a head under your arm, skid around corners on a surfboard, or put Christmas lights on your head. All you’ll get for response in the hallways is “good morning.”

A few hours ago, I myself came close to receiving an unidentified injection when I fell asleep upside down in the companion’s chair, head down, my ass up. It had taken me half the night to find the perfect position. In the early hours of the morning, the nurses go through hundreds of dimly lit rooms handing out pills, and injections and, of course, they always go for the easier butt. The smell of alcohol brought me to my senses in time to shout out, sergeant major style, a string of things I’m allergic to. It’s the only thing they pay attention to in those early hours.

Apart from these little things, it would be unfair to say that the treatment in this hospital is anything less than exquisite. I have even managed to get a beautiful redhead nurse to smuggle me in a rum and coke every night when it’s time to change the IV drips, and generally the doctors are extremely respectful of the companions’ backsides. This cannot be said, for example, of most of our politicians. But I don’t want to mess with anyone today, so …

Dear friends and readers: Merry Christmas and put a hospital admission in your life!