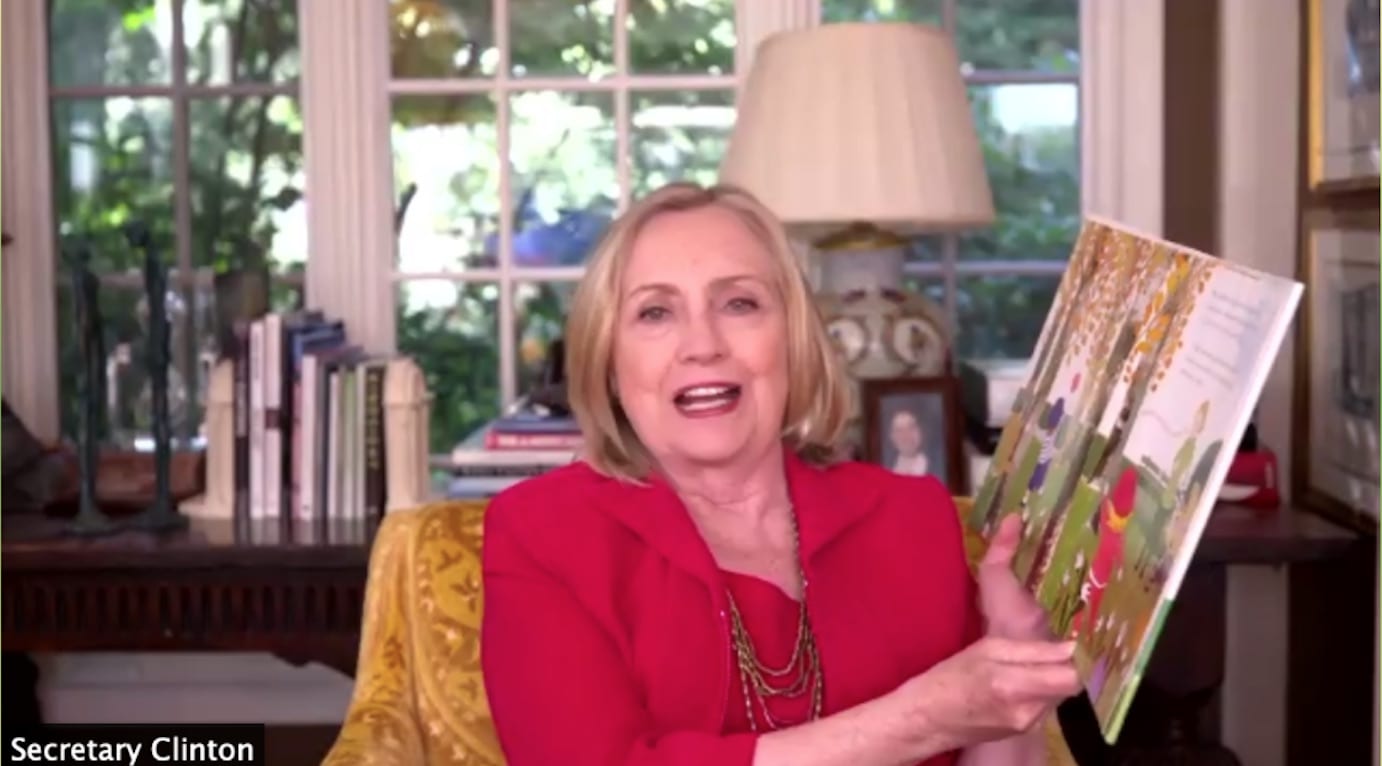 “Gardens are where we create beauty,” says Hillary Clinton, reading aloud from Grandma’s Gardens, a children’s book she recently co-wrote with her daughter, Chelsea.

It’s Tuesday afternoon and the former first lady is powering through a slew of public appearances. Today it’s the Grandma’s Gardens virtual book drop at Politics and Prose (which I attended on Zoom). Wednesday no doubt she’ll be fending off questions when Hulu announces that they’re working on yet another show about her. On Thursday, she’ll livestream her thoughts on the coronavirus and American history with Hamilton star Lin-Manuel Miranda.

A less gutsy woman would find this daunting, but Hillary is no stranger to the grind. Around this time four years ago, she was pushing her limits every day of the week in an ultimately thankless venture. But no one needs to remind her of that now, least of all herself.

“Gardens help us stay strong,” she reads, pointing to an illustration of herself, Chelsea, and her mother Dorothy working the land.

When Hillary and Chelsea finish reading, they open the floor for questions from the audience, moderated by Lissa Muscatine, a longtime player in Clinton politics. Muscatine, who bought Politics and Prose in 2011, often hosts these sorts of events — online during the pandemic — bringing in journalists, senators, and, at one time, Michelle Obama to read and discuss their books.

But as with all things from Hillaryland, this reading is a bit different. The former first lady has always been a downer, and since the 2016 election, a black raincloud has hung over her head. In almost every public appearance, she’s been bitter, a self-described “nasty woman,” saying multiple times that she would relish a rematch with Donald Trump. In Grandma’s Gardens, though, she’s trying to show off her nice side.

And for most of the hour, Hillary holds it together and gushes about her herbs. Not that that’s so hard. The garden has historically been a place of respite for political leaders when they run up against failure, ever since Epicurus made it fashionable.

All the greats loved their gardens. Diocletian, when he finished persecuting the Christians, retreated to a massive one, where he grew cabbages well into his retirement. Machiavelli, while in exile, became a great fan of gardening, so much that he composed the discourse of The Prince out among the weeds. Voltaire, in Candide, advises his readers that when all goes wrong, forget politics, leave behind philosophy, and “tend to your garden.”

Hillary has been trying to follow that advice. The lettuce is doing well. So are the snap peas. The corn, unfortunately, is not. But after all, she jokes, this isn’t Iowa. Corn is harder out east.

She’s picked up other pastimes, too. Reading, writing, swimming — all have become important to her since the coronavirus restricted public activity. Oh, and Chelsea reminds her, in the past few months, Hillary has really shown a knack for knitting.

But Hillary quickly dispels that notion: “It took me, like, three weeks to make a potholder, so let’s not get carried away there.”

Not all Hillary’s activity is recreational. She admits that thoughts about the election — her election — eat at her brain. She wants to make sure that the same catastrophe doesn’t happen again.

“I try to be as active as I can in doing what we must do over the next months to try and have a different outcome in the election,” she says, promising that she’s trying her darnedest to get former Vice President Joe Biden elected.

Chelsea, picking up where Hillary left off, says she’s still rubbed raw that the current administration, and not her mother, is in charge of handling the coronavirus pandemic, even as she is still hopeful things will change in the fall.

“I’ve been angry since January, when it became clear to me that the Trump administration was not prepared — and purposely not prepared — to help protect our public health and Americans lives from COVID-19,” Chelsea says. “I don’t try to suffocate that anger.”

But such are the foul winds that occasionally blow through the garden. And, as the reading draws to a close, they threaten to become a storm. When Muscatine suggests that Bill Clinton and Hillary could co-author a book as their next project, Hillary lets out a laugh.

“We haven’t thought about that,” she says. “But who knows? We’re open to all kinds of new, um, writing experiences.”

Chelsea shuts down the idea when Muscatine suggests that maybe she could help, too: “Oh gosh. I mean, with all three of us, nothing would ever get done.”

It’s probably better that way. The Clintons may well create beauty in their garden, but they’ve yet to bring it anywhere else.