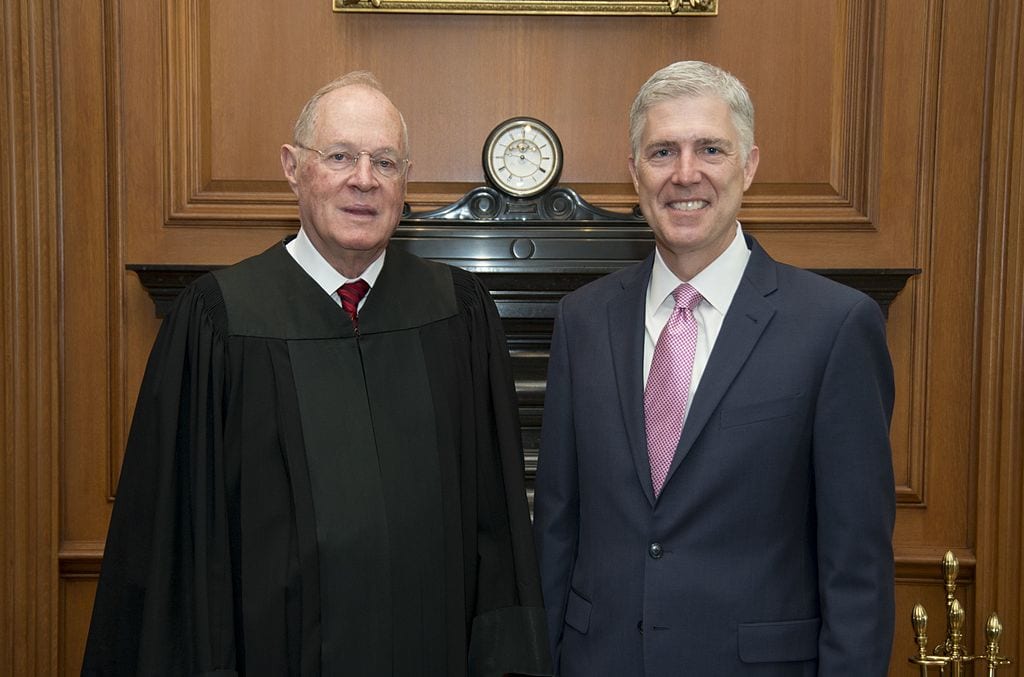 What a difference one justice makes. In two of the most significant Supreme Court cases this session, Justice Neil Gorsuch helped form a conservative majority that alternately rebuked an overreaching state government and put public-sector unions in their place. But despite overheated news reports, the cases weren’t really “anti-abortion” or “anti-union.” Both decisions were “pro-First Amendment,” in that they rebuked two noxious, albeit unrelated, forms of compelled speech.

In the National Institute of Family and Life Advocates v. Becerra, the court dumped a California state law that requires privately funded pro-life crisis pregnancy centers to provide pro-abortion messages to their clients. In Janus v. the American Federation of State, County and Municipal Employees, the court ruled, also on a 5-4 vote, that it’s a violation of the First Amendment to force workers to subsidize even the collective-bargaining activities of unions.

The law spotlighted the hypocrisy of the “pro-choice” movement, which seems only to favor one particular choice. Crisis pregnancy centers are generally religious-based organizations, funded by donations, that provide a humane alternative to abortion. No one is dragging pregnant women into these centers. The women get help with the bills while they carry the child to term. The obvious goal is to enable women to give birth rather than choose a grisly alternative.

As I explained for the Spectator, the law required these clinics to prominently post signs to this effect: “California has public programs that provide immediate free or low-cost access to comprehensive family planning services (including all FDA-approved methods of contraception), prenatal care, and abortion for eligible women. To determine whether you qualify, contact the county social services office at (insert the telephone number).” It’s the equivalent of the California government telling me that I have to include arguments in my columns that violate my core beliefs. It’s outrageous, and the court rightly recognized the speech burden the law imposes.

“The unlicensed notice imposes a government-scripted, speaker-based disclosure requirement that is wholly disconnected from California’s informational interest,” wrote Justice Clarence Thomas for the majority. “As California conceded at oral argument, a billboard for an unlicensed facility that says ‘Choose Life’ would have to surround that two-word statement with a 29-word statement from the government, in as many as 13 different languages. In this way, the unlicensed notice drowns out the facility’s own message.”

The decision has potential implications beyond crisis-pregnancy centers. For instance, the court majority noted that the law seems to create a separate category of unprotected “professional” speech. Previous courts have allowed incidental burdens on speech in a professional context, such as matter-of-fact notices that require informed consent for certain medical procedures. Indeed, the court’s liberal justices were fixated on laws in other states that require that abortion clinics provide certain information about the procedure to their clients. I’m not sure about the specifics of those state laws, but the California law went far beyond “informed consent” notices and rules reminding employees to wash their hands after visiting the restroom.

This law was designed to advocate a point of view (that you can still get an abortion for free, you know) that is diametrically opposed to the basic purpose of the organization. The FACT Act was particularly authoritarian in nature. It’s bad enough when governments quash or limit a person’s speech, but this law compelled a certain type of speech.

The Sacramento Bee’s editorial board offered one of the dumbest comments on the decision: “It put a damper on California’s right to protect the health of its residents, further eroded the already endangered right to choose when and whether to have children and upheld the right to misinform.” The Bee better be darn happy that it has a constitutional right to “misinform” us, but it’s stunning that a newspaper wouldn’t see the First Amendment implications here.

The union-related Janus case will no doubt have a more far-reaching result, despite efforts by Democratic legislatures to undermine the ruling. In the 1977 Abood decision, the high court split the baby, so to speak. It ruled that public-sector workers could withhold dues payments to unions for direct political activities, rightly finding it a First Amendment violation to force them to fund campaigns that go against their core beliefs. But the court also ruled that they must pay dues for contract negotiations, lest people become “free riders.”

The plaintiffs in Janus rightly argued that all such dues payments are a form of compelled speech. If, for instance, a union negotiates higher salaries, expanded pensions or greater protections for firing for employees, then those have clear public-policy implications. Everything unions do with dues paid by government-funded salaries is indeed political. “Under Illinois law, public employees are forced to subsidize a union, even if they choose not to join and strongly object to the positions the union takes in collective bargaining and related activities,” wrote Justice Samuel Alito, in the majority opinion. “We conclude that this arrangement violates the free speech rights of nonmembers by compelling them to subsidize private speech on matters of substantial public concern.”

Liberal Justice Elena Kagan, writing in dissent, argued that “Public employee unions will lose a secure source of financial support” and that “the relationships of public employees and employers will alter in both predictable and wholly unexpected ways.” Well, yes and yes. But it’s not the court’s purpose to ensure that one Democratic-friendly interest group has a never-ending source of financial support. And the relationships will change for the better — as union members will suddenly have the freedom of choice and association.

All in all, these were wonderful court decisions and a reminder that the newest justice appears to be a consistent champion of liberty and free speech.