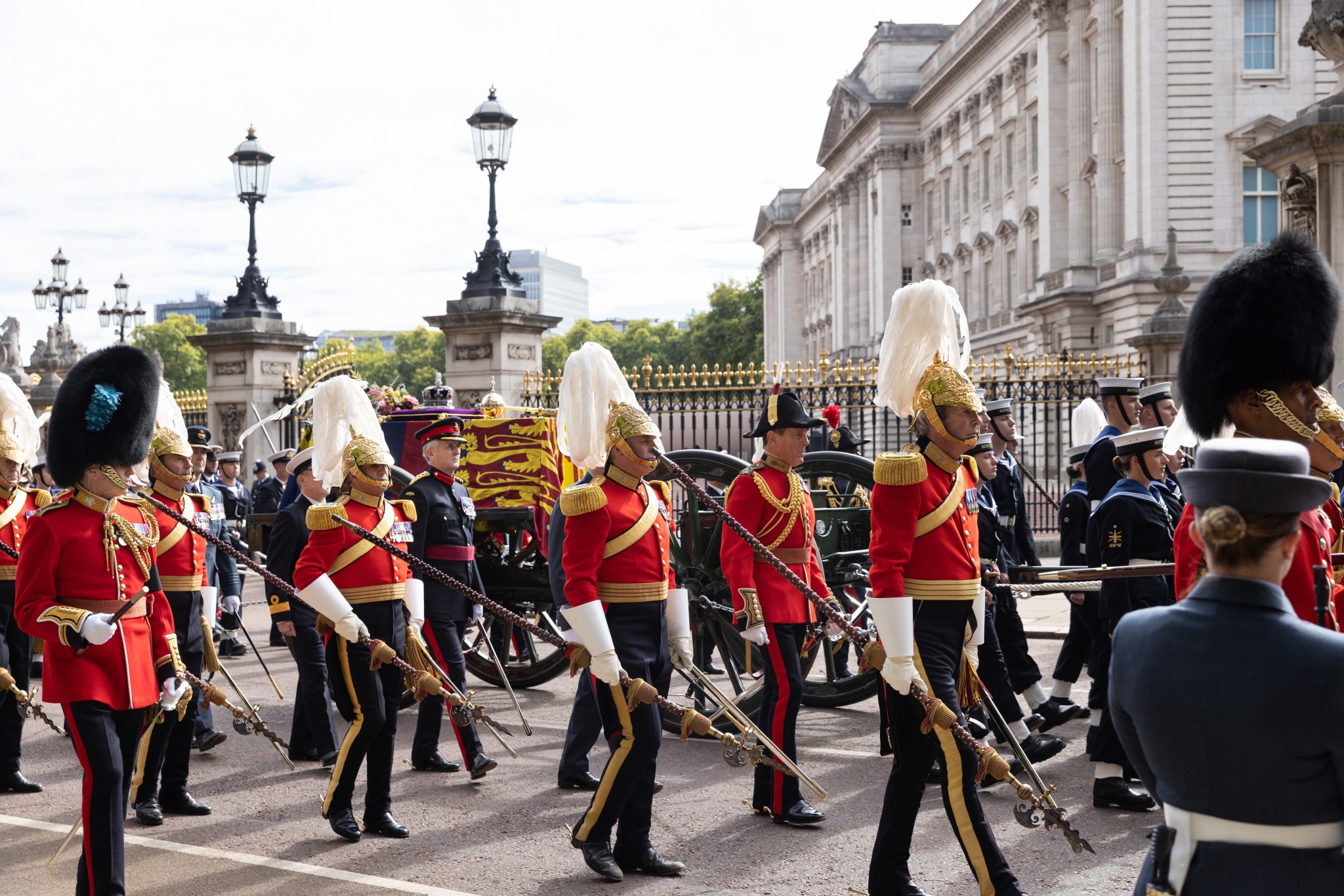 As a practicing Anglophile, heavy TV news consumer, and borderline insomniac, there was no chance that I would miss the funeral of Queen Elizabeth II. The 4 a.m. ET start of coverage was less a deterrent than a lure.

I tuned in and was mesmerized for much of the next eight hours. The pageantry, beauty, and epic scale far exceeded my great expectations.

The queen’s farewell was awash in colors: Beefeaters in bright red livery flanked the memorial procession. One hundred forty-two Royal Navy sailors in dark blue uniforms used long white ropes to tug the light green State Funeral Gun Carriage that bore the departed monarch’s coffin. Atop this 121-year-old platform, a gold and burgundy royal standard draped the coffin, which was adorned with pink, yellow, and light orange flowers freshly clipped from the gardens at Buckingham Palace and Clarence House. The gold orb and scepter glittered beside the deep purple, diamond-encrusted Imperial State Crown.

As if directed by Cecil B. DeMille, some 6,000 of Her Majesty’s military personnel accompanied her final journey. They marched for miles in precision at a funeral-grade pace of 75 steps per minute, with nary a foot out of place. Each boot hit the ground as planned and arose on schedule. The result was a steady, rhythmic rumble that underscored the day’s gravity.

From Westminster Hall to Westminster Abbey and, later, on to Wellington Arch, these even-keeled Englishmen, Scots, Welshmen, and Northern Islanders carried on through clouds and sunshine with determined faces. No one sagged. No one buckled. No one faltered. No one let the crushing weight of this undertaking overpower him. They kept their chins high in honor of their fallen queen. In every good way, upper lips never have been stiffer.

While the queen seemed more diminutive than usual in her final days, she rested inside a coffin entirely unlike her. Wrought of thick English oak and lined with lead, it reportedly weighs between 550 and 700 pounds.

Never mind! These strapping British lads unflappably bore this physical burden with the eyes of the world upon them. Lacking a casket’s rails to grip, they carried Her Majesty’s quarter-ton coffin on their elegantly appointed shoulders and marched with it along streets, up and down stairs, and back and forth inside church naves. They did so without flinching, squinting, or sweating and displayed only tireless devotion. They executed their mission flawlessly and epitomized what men — British and otherwise — should be.

Accompanied by the enchanting sounds of brass, drums, and choruses, these images were spectacular. My high-definition TV never looked better.

A Fox News colleague of mine marveled at how flawlessly all of this went off, although this occasion was anything but routine. London saw its last state funeral in 1965, as the United Kingdom said goodbye to Sir Winston Churchill, the queen’s first prime minister. Leave it to the Brits to get something this monumental just right while 57 years out of practice.

What most surprised me about this breathtaking telecast was how deeply it touched me. Steadily, I slid from dry eyes to moist ones to tear-dampened cheeks. I eventually bawled like a baby and blew my nose into one Kleenex after another.

I was not alone. Numerous friends told me that they cried. Broadcasters admitted as much on air.

This is understandable among the queen’s grieving subjects. But why the long faces in America, which threw off the royal yoke in 1776 and never looked back?

Her Majesty’s funeral itself was impossible to watch without experiencing intense feelings. The drier King Charles III’s eyes remained, the sadder one felt for a man who lost his beloved mother and yet maintained perfect composure — because his job is and has been to keep it together. (READ MORE: Loss of Queen Leaves Deep Unease Across UK)

Princes William and Harry did likewise, much as when they buried Princess Diana, whose car-wreck death came as a total shock. The thousands who paraded alongside their queen remained exquisitely stoic. Their internalized melancholy triggered its eruption elsewhere.

As for the queen herself, a lifetime of public duty earned immeasurable goodwill for her and her nation. Today, this brings the sadness that her varied efforts will be no more.

Queen Elizabeth II was “the soft-power equivalent of an aircraft carrier,” British historian Andrew Roberts wrote in his lovely appreciation in the Wall Street Journal. He continued:

We as a nation made The Queen do things that we would never, ever, even consider doing ourselves. We expected her to do her job to the age of 96, when we retire at 65, and to keep doing it up to two days before her death. We expected her to invite bloodthirsty dictators to stay in her home, because British foreign policy interests required it. We expected her, aged 86, to stand on a boat in the Thames in the freezing rain during the diamond jubilee, waving for hour after hour. We expected her to shake the hand of a former IRA gunman who approved the murder of her husband’s uncle. We expected her to smile and charm and shake hands cordially, whatever she might privately have been feeling inside about her family’s all-too-public traumas.

She did all of it, and in 70 years she never once complained. She was the best of us.

Much of Monday’s profound sorrow reflected the fact that seven decades on the throne made the queen a North Star: She was someone who simply would be there, always, until the heavens fell. Year after year, she persisted — elegant, fashionable, dignified, and present.

The queen mother lived to 101. Naturally, Queen Elizabeth II would survive until at least 110. Why not? She seemed immortal.

So, imagine the pathos at Windsor Castle: Her Majesty’s flag-bedecked coffin was relieved of the orb, scepter, and crown atop it and lowered through the floor of St. George’s Chapel into the Royal Vault, where it vanished. Seventy years as queen, and then … gone!

Why were an estimated four billion people worldwide riveted before their TV screens, with so many of them sobbing?

As a little girl, Princess Elizabeth playfully called her grandfather, King George V, “Grandpa England.” After appearing on the cover of Time magazine at age 3, she grew up and, at age 25, ascended to the throne. More than any other British monarch, Queen Elizabeth II spent 70 years — 39 percent of America’s existence — at the center of world events and eventually became our global grandmother.

Thus, the tears for Grandma Earth.