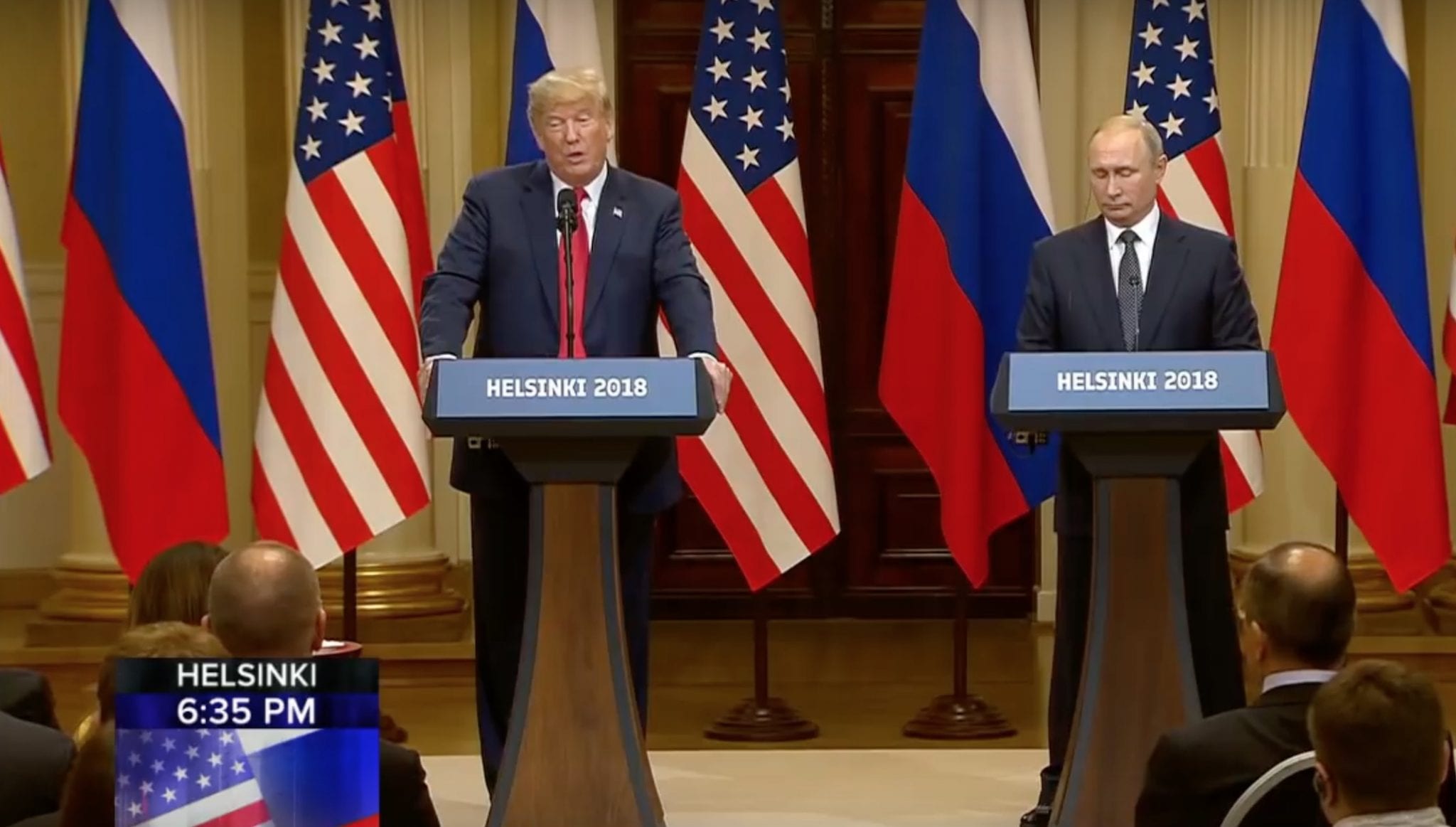 Let’s be honest — there was no way President Donald Trump was going to come out well from Monday’s press conference with Vladimir Putin following the one-to-one summit the two leaders conducted in the Finnish capital.

That’s not an indictment of Trump per se. It’s just a fact. The indictment of a dozen officials of the Russian GRU laid down Friday on charges of meddling in the 2016 election, on the eve of the summit, insured that most of the questions asked of the two leaders would be about the overworked Trump-Russia collusion narrative, and the Hobson’s choice presented to Trump by that reality meant that, at least in public, he was either going to have wasted his time in Helsinki or come out of the press conference looking like a weakling.

And given Trump’s oft-repeated insistence that the Russia story is a media hoax and a Robert Mueller-engineered snipe hunt, he had little choice but to appear the latter.

How could he have done otherwise? We already know, as Jed Babbin explained here at TAS yesterday, that Friday’s Russian indictments were more or less a sham. As Babbin said…

Mueller and Rosenstein knew that the GRU officers wouldn’t be extradited after the Friday indictments were announced. If the Friday indictments were a serious pursuit of Russian wrongdoers (which, perforce, they aren’t) they would have been handed up by the grand jury, sealed from public disclosure, and one or more of the people indicted lured to some jurisdiction where they could have been arrested and brought to the U.S. for trial.

But that wasn’t Mueller and Rosenstein’s intent. By timing the Friday indictments on the last business day before the Trump-Putin meeting, these indictments were much more than a publicity stunt. They were an improper attempt to influence what Trump does at the summit.

Whether or not the Democrats had been tipped off by Mueller or Rosenstein, they reacted with near-record speed demanding that the president cancel the Putin meeting.

Shortly after the announcement, Senate Minority Leader Chuckie Schumer said, “President Trump should cancel his meeting with Vladimir Putin until Russia takes demonstrable and transparent steps to prove that they won’t interfere in future elections. Glad-handing with Vladimir Putin on the heels of these indictments would be an insult to our democracy.”

So Trump is asked about the Russian meddling, the overtone of which is the Democrat Party accusation he colluded somehow with the Russians to rig the election, and he’s put in the position either to back the U.S. intelligence community which has helped to perpetuate that story and weaken his presidency or to criticize his own government in the presence of Putin — who has unmistakably acted against American interests his entire adult life — and in so doing suffer a hit to his own and his nation’s prestige.

That Trump did the latter will be the source of a great deal of wailing among the political class. It’s already begun, as figures as varied as James Comey, John Brennan, Mark Warner, Jeff Flake, and Newt Gingrich have all responded to the President’s equivocations about Putin’s denial the Russians meddled in the 2016 elections by either condemning, or at least clarifying, his statements. Rand Paul, interestingly, took Trump’s side.

And in this case, the screaming does have some merit. Trump needed to find some sort of middle ground which didn’t involve throwing his Director of National Intelligence Dan Coats under the bus by saying “”My people came to me, Dan Coats came to me and some others. They said they think it’s Russia. I have President Putin, he just said it’s not Russia. I don’t see any reason why it would be.

“I have great confidence in my intelligence people,” he said. “But I will tell you that President Putin was extremely strong and powerful in his denial today.”

That might have felt good considering the torment the Obama and NeverTrump Deep State partisans in the intelligence community have put Trump through. But it’s an unnecessary bit of damage to American prestige.

Which it is. Whether Mueller’s indictments carry sufficient proof with them to hold water or not, we already know the Russians stuck their noses in the 2016 election. But that’s hardly new. The fact is Russia has been meddling in American elections — and American society — since the October Revolution of 1917. The 2016 election was merely the first time the Democrat Party didn’t support their efforts. And it’s fair to mention we’ve returned the favor as often as we could. David P. Goldman, writing at PJ Media Monday…

Full disclosure: I was a card-carrying member of the neoconservative cabal that planned to bring Western-style democracy and free markets to Russia after the fall of Communism. As chief economist for the supply-side consulting firm Polyconomics, I got an appointment as an adviser to Boris Yeltsin’s finance ministry and made several trips to Moscow. Of course, the finance ministry really was a family office for Yeltsin’s oligarch friends, who were too busy stealing Russia’s economy to listen to advice. The experience cured me of the neoconservative delusion that democracy and free markets are the natural order of things.

Unfortunately, the delusion that the United States would remake Russia in its own image persisted through the Bush and Obama administrations. I have no reason to doubt the allegations that a dozen Russian intelligence officers meddled in the U.S. elections of 2016, but this was equivalent of a fraternity prank compared to America’s longstanding efforts to intervene in Russian politics.

Thanks to President Trump, Russia (as well as China) now understands that America’s intervention in Iraq was not a deliberate effort to destabilize the region, and that its support for Sunni jihadists in Syria was not a deliberate effort to create an Islamist monster with which to destabilize Russia. Under the headline “They’ll never believe we’re that stupid,” I wrote in May 2015: “Beijing and Moscow made up their minds some time ago that the United States had deliberately unleashed chaos on the Levant as part of a malevolent plan of some kind. The Chinese and Russians (and most of the rest of the world) simply cannot process the notion that the United States is run by clueless amateurs who stumble from one half-baked initiative to another, with no overall plan (except, of course, to persuade the Persians to become America’s friends rather than enemies).… Incompetence has consequences. One of the consequences will be that our competitors and adversaries will take us for knaves instead of fools, or even worse, will recognize that we are fools after all.”

Nevertheless, the hysteria from Helsinki is greatly overdone. Trump might have missed an opportunity to reassert American prestige at Putin’s expense, and in doing so delegitimized his Deep State tormentors, but so far it doesn’t appear that the summit changed anything with respect to the far tougher stance he’s taken toward the Russians than did his predecessor.

What’s more, by now we should all have learned that Trump is crazy like a fox with respect to his public statements. It’s likely that he sees some benefit to soft-pedaling his differences with Putin in Helsinki, and only time will illuminate that for the rest of us.

Then, of course, there is this statement by the president…

“He denies it. So the idea that somehow public shaming is gonna be effective, I think doesn’t read the thought process in Russia very well.”

I finally got around to watching Chappaquiddick over the weekend, and for those with an interest in the history of the 1960s and/or the Kennedy family — particularly those who aren’t caught up in the hagiographic portrayal of the Kennedys the legacy media refuses to relinquish — it’s well worth a watch.

Jason Clarke, who is actually Australian though you’d never know it from his various roles in films like Zero Dark Thirty, The Great Gatsby, Terminator Genisys, and Mudbound, plays a terrific Ted Kennedy — he’s neither a spectacular villain nor a hero of the story. Instead, Clarke’s portrayal is what Kennedy was: a stunningly mediocre man, far too small for the role thrust on him by history and certainly incapable of the kind of selfless responsibility the death of Mary Jo Kopechne (played by Kate Mara) called for. The movie suggests Kennedy confidant Joe Gargan (played by Ed Helms) attempted to talk Ted into a resignation amid the burgeoning furor over Kopechne’s death; that suggestion was rejected.

The guess is most TAS readers won’t have any opinions changed by the film. That’s an unalloyed good thing.

By the way, the Trump campaign has already raised $88 million toward his re-election in 2020. The Democrats are going to have one heck of an uphill fight in beating him even if they can find a candidate the public can tolerate for the length of that election cycle, a prospect which is not currently in evidence.

Finally, we have this…

Walton-Fisette says competitive team sports should be discouraged as well because of the negative effects they might have on “social justice.”

And your tax dollars are paying for it. Are you triggered by that?