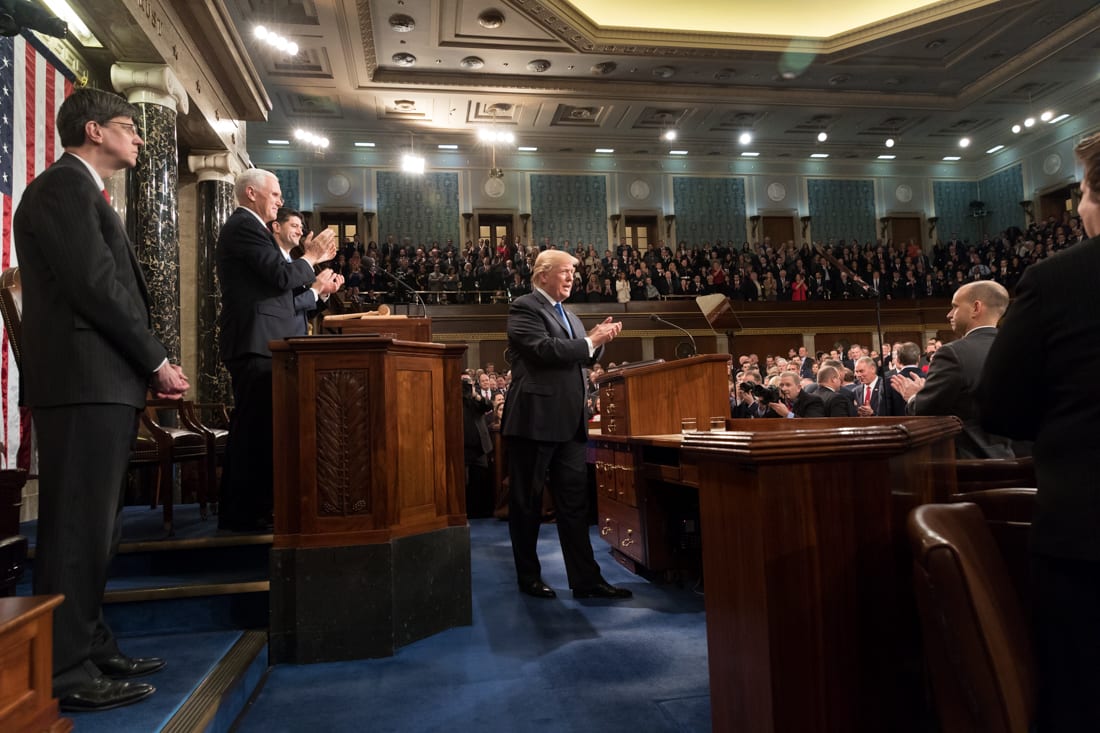 Nothing demonstrates the presidency’s power more clearly than the annual State of the Union address. It is not simply a fixture in the nation’s political system, it is the fixture — the sun around which non-presidential election years orbit.

Without a presidential election, America’s political attention focuses for one night on one place on one person: The President. He gets two hours of full-scale media coverage. It is preceded by days’ worth of buildup and followed by days’ worth of analysis. In between, he solely holds the stage: Unfiltered, uninterrupted.

During that time, the president completely controls his destiny. His critics are forced to listen, unable to speak. His political opponents must sit in silent attendance, a mute chorus before him. Presidents stand before them like Gullivers in Lilliput; everyone else can do nothing, except make themselves appear smaller.

Last Tuesday night, President Trump took full advantage of this asset his office bequeathed him. His speech took direct aim at America’s center-right comprising three-quarters of America’s voters. For the other quarter, he offered no quarter. Yet unless you were a committed liberal, assiduously reading between the lines, there was nothing to fault. Sitting there quite helpless, the liberals in their silence were made to look extreme.

Rasmussen’s latest job approval poll (2/2) shows the speech’s impact. Trump’s rating was even: 49 percent approve/49 percent disapprove. It is his highest level in eight months and a six percent approval gain from the day before his speech.

This is not to say his was a tour-de-force in content or delivery. It was good, very good actually. And in its lack of greatness it showed even more clearly how powerful the presidency is. There is a reason why once elected, presidents are almost always re-elected; only three in the last century have lost a second term.

His State of the Union speech also showed what Trump could make of the presidency — or more accurately: What it could make of him.

Good has not been a given with Trump. All too often, he has been his worst enemy, interposing his own weaknesses between himself and his office.

Certainly he has been victimized by press and opponents alike — frequently unfairly. Still, this should come as no surprise. What recent president has not been? Yet too often he has taken the bait and forfeited the presidency’s advantages.

That President Trump could master the message in his State of the Union should come as no surprise. This won him the office. Not being Hillary was not enough, any more than not being Trump was enough for Clinton.

In his campaign, easily the biggest upset since at least Truman’s in 1948, he tapped voter veins Republicans had repeatedly missed. He turned blue states red. Amazingly, he literally did so in spite of himself. Tuesday night proved clearly he has the message to do so again.

Yet while he has mastered the message, it is still unclear whether he can master the man. This inability in the campaign was nearly his undoing, almost eclipsing his message. Likewise, his inability to do so in the White House has too frequently negated the office’s power.

The economy is evidencing a strength unseen in years. His predecessor and opponents offer him the benefit of clear contrasts. As his State of the Union speech showcased, he has successes in office to point to. And he still has three years left in office to bring these all to bear.

However, to succeed in utilizing his ample opportunity, he must master the man.

The presidency is an elevating office. It has become so huge, it could hardly be otherwise. Few come to it already elevated like a Washington, Jefferson, Jackson, or Eisenhower. Once in, some have elevated the office — as did both Roosevelts.

However, the vast majority of its occupants, despite often having distinguished qualifications, are elevated by the presidency. There is no shame in it. This is the normal course. It is the one on which Trump must now set himself.

Simply, Trump can be President Trump if he merely lets the office take him there. Mastering the message gave him the opportunity — he proved it again with his State of the Union speech. Mastering the man, could give him the reality.

Many are under the misapprehension Trump must make himself into someone he is not. His critics seek to convince that this is someone he cannot be. The truth is Trump must simply let himself be what the presidency will make him, if he just allows it to.