A tweet from Vice President Kamala Harris sent out on Tuesday has become the latest in a series of miscalculations to spark international concern. The tweet signals a disconnect between Harris and the administration, as the vice president’s comments were contradicted in an edited transcript by the White House. Harris’ comments offered more aggressive rhetoric than President Joe Biden by equating Ukrainian security with NATO security. Her statement comes as Ukrainian and Russian officials attempt to mitigate the conflict with the aid of Israeli Prime Minister Naftali Bennett as mediator between the warring nations. 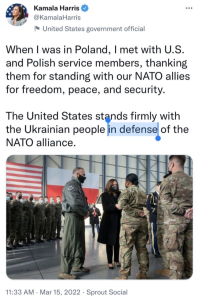 Harris’ deleted tweet appeared to be a change in tone by offering a stronger stance on the escalating conflict between Ukraine and Russia. While the White House has maintained in past statements a clear distinction between offering aid to Ukraine and guaranteeing military obligations with NATO member states, Harris’ tweet appeared to combine the two commitments.

Critics of Harris voiced concerns over the possible implications of the tweet, as it could signal to Russia plans to induct Ukraine into NATO, despite concessions from Ukrainian President Volodymyr Zelensky that Ukraine will not join. Former Defense Intelligence Agency intelligence officer Rebekah Koffler told Fox News Tuesday that Harris’ tweet “simply confirmed to the Russians what they suspected all along — and that is that Ukraine is de facto already halfway into NATO.” Some believe that the possibility of Ukraine receiving NATO membership served as a principal rationale for the Russian invasion, and fear this tweet may be spun by the Kremlin to serve as further justification.

The more aggressive messaging expressed by Harris’ verbal comments and initial tweet may be indicative of a desire for increased involvement in the war in Ukraine. In a virtual address to Congress on Wednesday, Zelensky pleaded with the U.S. and Western world to provide support through increased sanctions on Russia and the transfer of critical weapons including surface-to-air missiles and shoulder-mounted launchers. Biden, who remains opposed to the transfer of Polish-owned MiG fighters to Ukraine, will provide $800 million in new security assistance.

Following the remarks from Zelensky in Congress and the apparent tougher line in Harris’ messaging, it is expected that the U.S. will continue to provide military equipment and aid to Ukraine. Biden will be attending a NATO conference in Brussels next week to discuss continued action regarding the Russian invasion and consider further economic sanctions.