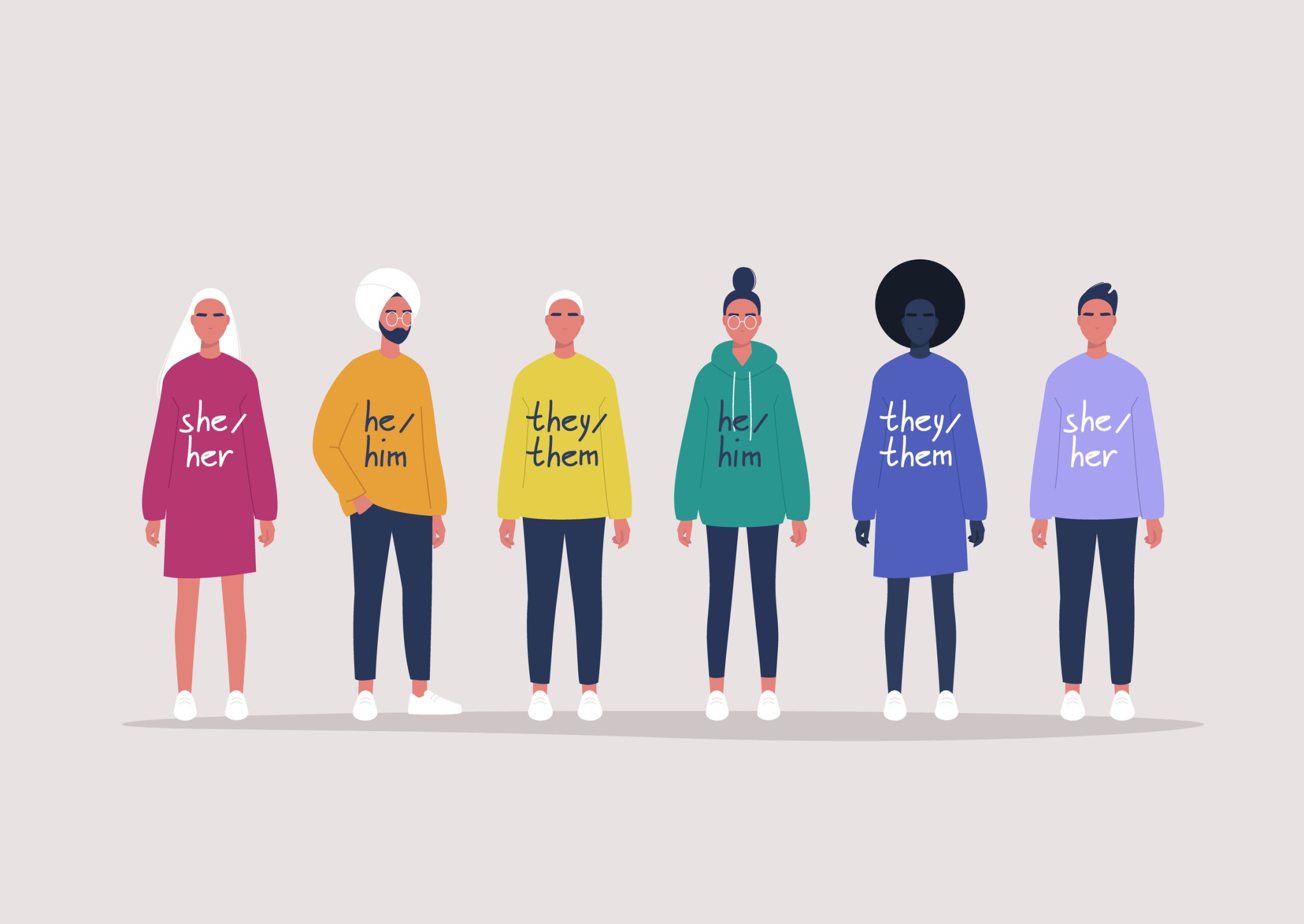 “Today on International Pronouns Day,” tweeted the U.S. State Department on Wednesday, “we share why many people list pronouns on their email and social media profiles.”

The tweet linked to an article at ShareAmerica, the State Department’s “platform for communicating American foreign policy worldwide.”

So tell me how any of the following twaddle helps to communicate American foreign policy worldwide.

In the U.S., writes Lenore T. Adkins, “it’s becoming increasingly common for people to ‘share their pronouns’” to indicate that they “identify as gender nonbinary” or whatever. “Knowing and using someone’s pronouns,” she adds, “avoids accidentally assuming an incorrect gender based on a name or an appearance.”

Leaving aside the question of what any of this bilge has to do with U.S. foreign policy, tell me: what percentage of people abroad know what “gender binary” means? How many understand what Adkins is talking about when she refers to “assuming an incorrect gender based on a name or an appearance”?

Does she think everybody looking at ShareAmerica has just completed a Gender Studies major?

In trying to explain this pronoun jazz, Adkins uses the term LGBQI+, which obliges her to further explain that it “stands for lesbian, gay, bisexual, transgender, queer and intersex people, with the ‘+’ signifying all the gender identities and sexual orientations that are not specifically covered by the other initials.”

Again, how many foreigners could possibly make sense of this tripe?

Adkins goes on to maintain that “American society is showing acceptance of the trend. Nearly 1 in 5 U.S. adults knows someone who goes by gender-neutral pronouns, according to a survey by the Pew Research Center.”

Notice the utter lack of logical connection here. Being personally acquainted with somebody who buys into this cockamamie stuff is not at all the same thing as buying into it oneself. Why has the State Department chosen to be in the business of misinforming the world about the level of acceptance of the pronoun trend within what we used to like to think of as our borders?

At least Adkins is honest enough to admit that this a “trend.” Or maybe that just slipped through?

Finally, Adkins brags that the White House now has “a website contact form with gender-neutral pronouns and the nonbinary prefix ‘Mx.’ And the Department of State announced June 30 that U.S. passport forms will allow applicants to choose male or female gender, regardless of what their other documents indicate, and will eventually include an option for nonbinary, intersex and gender-nonconforming people.”

In short, precisely when they were supposed to be planning one of the massive logistical operations in decades — the withdrawal of American civilians, Afghan friends, and service dogs from Afghanistan — at least some people at State were congratulating themselves on having introduced “woke” passport forms.

And at least one, Lenore Adkins, was writing that stupid article.

The article presents itself as explanatory. But it raises far more questions than it answers — a mountain of them, in fact. Of course it would probably take a good-sized book to try to bring foreigners up to speed on every new bit of claptrap mentioned in Adkins’s article. And by the time you wrote that book and they finished reading it, you’d have to append a bunch of additional chapters about all the new pronouns and new lingo that have been introduced while you were busy writing it.

Because one aspect of this trend is that it grows like kudzu. It expands like the Blob. It’s one big top-this contest, encouraging unstable, self-absorbed people who are desperate for attention to dream up a label that nobody else has yet come up with.

One question that Adkins doesn’t answer in her article is this: where the hell did International Pronouns Day come from? Perhaps she doesn’t answer it because she’s trying to convince foreign readers that this is an established American holiday. In fact, International Pronouns Day was concocted in 2018 by some academic dolt you never heard of and is being promoted by him and three other clowns.

The twit behind this gimmick — sorry, the co-chair and founder of this initiative — is Shige Sakurai, an adjunct at American University. He apparently has little other than International Pronouns Day to brag about, given that it’s mentioned on the first line of his faculty bio — followed by the news that he’s “the first person in the U.S. to receive an officially nonbinary, X-marker driver’s license.” Hooray. Clearly, this is one of your contemporary academics whose job isn’t in the slightest about all that old-fashioned stuff like education but, rather, about activism. And activism, moreover, of the trendiest, silliest kind.

International Pronouns Day also has two board members: Courtney D’Allaird and Andrea Holland, minor administrators at the Universities of Albany and Colorado respectively.

No, I haven’t used any of these people’s pronouns of choice. To say “they” or “them” in reference to an individual is to sow unnecessary confusion, encourage (at the very least) a severe case of narcissistic personality disorder, and promote a dangerous ideology that has already been given altogether too much rope and that needs to be reined in ASAP.

Perhaps the only surprising thing about International Pronouns Day is that Sakurai hasn’t managed to get bigger names to sign on to it, just to make it look a bit more happening. For heaven’s sake, when some fourth-rate academic climber founded the preposterous Center for the Study of Men and Masculinities a few years ago at my alma mater, he managed to persuade Jane Fonda and Gloria Steinem to let him put them down as advisory board members. Sakurai couldn’t get a single marquee name!

Still, you’ve got to hand it to him. He couldn’t get Hanoi Jane, but he managed to grab the attention of some jerk in Foggy Bottom — and this at a time, mind you, when State was supposed to be focusing on that little matter of evacuating American civilians from Kabul.

How, one wonders, did this happen? Did one of Sakurai’s ex-students get a job at State?

Perhaps it might help to know more about Lenore Adkins, the author of that ShareAmerica article. Currently working at State, she covered the “U.S.-Cuba policy beat” for Bloomberg, then Middle East policy for the UAE’s Al Arabiya. What, no job at Iran’s Press TV? Was North Korea’s Central News Agency not hiring?

Hey, what do you suppose is the likelihood of the State Department hiring a former reporter for Al Arabiya as opposed to, say, a writer for The American Spectator?

Also, why do I have the feeling Adkins didn’t write a hell of a lot about pronouns during her stint at Al Arabiya?

But the key detail in Adkins’s bio is this: she studied journalism at American University — where Sakurai works.

Is it really that easy, then, for some academic hack to get the imprimatur of the State Department on a holiday he invented out of whole cloth? Did Adkins sneak this past her bosses?

Given that these are the people who screwed up Afghanistan, it’s not hard to imagine. But isn’t there anybody at State whose job it is to screen tweets sent out in its name and who’s discerning enough to realize that this sort of thing isn’t remotely a part of its job?

Or do they all really imagine that this sort of thing makes America look good through foreign eyes? For goodness’ sake, even our silliest allies, the French, think that this gender jazz, along with all its related pseudo-intellectual baggage, isn’t just inane but divisive and dangerous. Even the New York Times reported that Macron has denounced it.

And what about our enemies? Doesn’t this poppycock make us look pathetically weak in their eyes? But then, do any of the bright-eyed young things at State even see America as having enemies? Do they even think in terms of strength and weakness? Or do they see all of these as icky Trumpian concepts? Strength? Weakness? Enemies? Isn’t that how deplorables see the world?

And then there’s Afghanistan. Apparently the U.S. effort to win hearts and minds in Afghanistan involved spending hundreds of millions of dollars promoting gender ideology — which, needless to say, only made most Afghans feel even more alienated from Americans than they already did.

But let’s say there are a couple of people, even at State, who know that they’re pushing the irrational dogma of a tiny minority of crackpots and screwballs, and that America at large is fast waking up to — and turning violently against — this crap. How, then, can they countenance this kind of public outreach?

To me, it looks like a pretty clear-cut case of épater les bourgeois — that is, of thumbing their noses at the deplorables.

“Yes, we know you all hate this pronoun nonsense,” State seems to be saying to the great unwashed. “Well, we don’t care what you think. Wake up. It’s a new day. You’re serfs, and we’re here to represent only ourselves and others like us — the sophisticated, academically credentialed elite. If we’re foregrounding these newfangled pronouns, it’s precisely because this is one handy means by which we can distinguish our own lofty selves from you sweaty plebeians.”

Four stars? Why only four? Why not ten? Why not a zillion? Why not anoint her Queen of the Seas? Why doesn’t Biden issue an Executive Order commanding People magazine to name Levine the most beautiful woman in all of human history?

Why stop anywhere with this rubbish?

In any event, it all comes off as one big fat screw-you to the American public by the Deep State. It’s as if everybody who’s anybody inside the Beltway knows that the Democratic Party has already arranged to win all elections hereon in, and that the intelligence agencies, mainstream media, and Soros prosecutors will do their part to deep-six any problems — making it possible for the D.C. elites to spread their various forms of hogwash far and wide.

Of which International Pronouns Day, alas, is among the more innocuous.