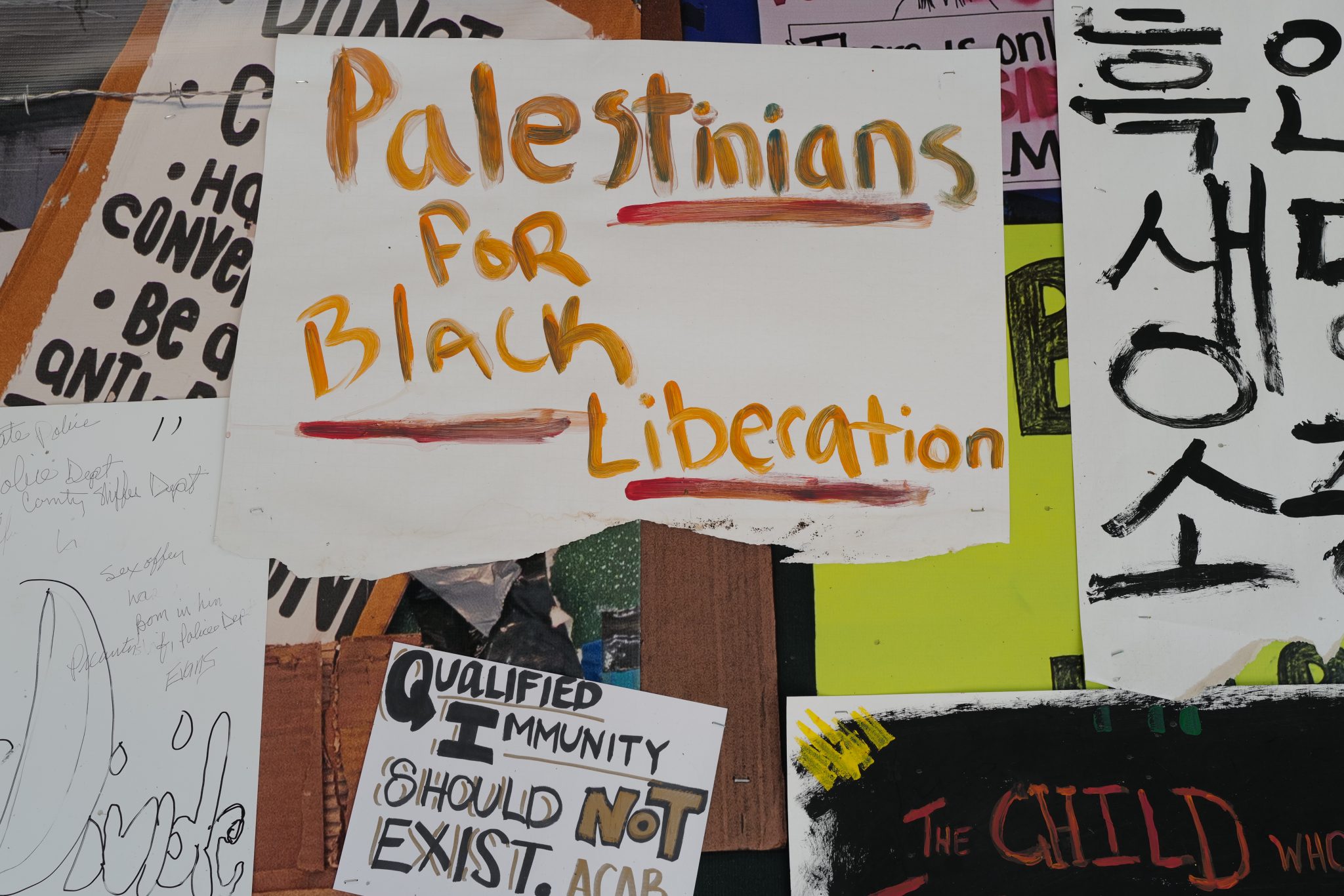 Yesterday here at The American Spectator, Dov Fischer lit up the sky like the Iron Dome blowing up Hamas’ rockets. Dov’s words were anti-ballistic missiles of truth, and everybody ought to read them.

Dov said it was no surprise that Black Lives Matter has aligned itself with the Hamas terrorists in a show of “solidarity,” and he gave a strong message that those of us who can see the lies spewed by both ought to show the same solidarity behind the truth.

What Dov wrote is excellent. He’s correct in every particular. I want to expand on it. Because there is no need for “solidarity” between Black Lives Matter and Hamas. They’re the same, separated only by geography.

I’ll start with this. It’s an actual recording of a conversation between an IDF soldier and a Gazan Arab when the IDF called to evacuate a building Hamas was using as a rocket launch platform:

Arab: I can’t get all of the people out. I need at least two hours to get them out.

IDF: Listen, we are going to bomb the building.

Arab: You want to bomb? Bomb whatever you want.

IDF: No, brother, we need to do everything we can so you don’t die.

Arab: We want to die.

IDF: But you have a responsibility for children’s lives.

Arab: If the children need to die then they’ll die.

Arab: This is how we reveal your cruelty.

That’s something, isn’t it? Pretty revealing, one might say.

Andrea Widburg at the American Thinker had a spot-on take about this:

Every person who supports the Arabs’ cause is supporting the slaughter of children. To Israel, whether Jew or Arab, children are lives to be saved; to Arabs, they are cannon fodder and propaganda props.

And at Ace of Spades’ blog, J. J. Sefton hits the subject even harder:

The insidious evil of it is that one group of people have been used and abused for several generations by their own kind as political and actual cannon fodder to both destroy another group they view as a nemesis and to cover up their own failings. I’m not just referring to “Palestinians,” the Muslim World and Israel. Substitute blacks/minorities, the Democrat-Socialists and America as founded – and you will be astounded. I’m a poet and I didn’t even know it. The dozens of cities that burned last summer was in fact an artificially-created “intifada” (which was artificial itself). All based on the lie of “white privilege,” “systemic racism” and “black genocide at the hands of law enforcement” and so on.

GOSPEL EMMES TRUTH 1: The misery, squalor and suffering of blacks and other minorities in this country is the fault of the Democrat Party and the socialist movement. The latter have used the former for the sole purpose of accruing power and instituting policies that both cement and grow that power while making those they supposedly champion even more miserable than before – all while blaming Republicans, conservatives, whites and America as founded as irredeemably guilty for the genocide they, the Left, caused.

GOSPEL EMMES TRUTH 2: The salvation of both these “oppressed” peoples lies in those they have been brainwashed to hate and blame for their misery.

The ACLU and SPLC and now the damned Justice Dept. are going on about “white supremacists” being the gravest danger to “our sacred democracy” (spit!). A few thousand loons in a nation of 320 million are about as dangerous to me as a Wuhan Frankenstein bat virus. But now take a look at Critical Race Theory and the 1619 Project. This madness isn’t warmed over quotes from Mein Kampf mimeographed on flyers. This is being taught in almost every school from coast to coast as a cornerstone of the national curriculum and again, substitute “white” for “Jew” and it’s the same damned thing.

I keep coming back to things that happen in my own state again and again, which I don’t know if I should apologize for or not, but these events keep proving out the national phenomena that we discuss. That’s true again.

This time it’s an old police brutality case that has just sprung to life after two years of scant notice. It involves the Louisiana State Police beating a nonviolent, non-criminal black guy named Ronald Greene to death on a roadside in the middle of nowhere — specifically Union Parish, 30 miles or so from the Arkansas state line — on the night of May 10, 2019, because Greene fled from a routine traffic stop and led a high-speed chase before he ran his vehicle into a tree.

Yes, he shouldn’t have driven away from the police. Everybody gets that. But unlike Daunte Wright, who was a wanted felon, or Alton Sterling, who was brandishing a gun at people and had the police called on him, or George Floyd, who had just had the cops called on him because he’d been passing bad paper, or Breonna Taylor, who was essentially a drug moll and whose boyfriend was shooting at the police, Ronald Greene doesn’t appear to have been a criminal. Nobody called the cops on him, and he wasn’t wanted. He just didn’t feel like being pulled over on the night of May 19, 2019, and he thought he could outrun the cops on some country roads he figured he knew better than they did.

Stupid, sure. But Ronald Greene is literally the case the Black Lives Matter crowd is in search of. Think about what they attempted to do with Ma’khia Bryant; they went so far as to attempt to convince the American public that teenagers getting stabbed in knife fights is a normal thing.

And yet you’ve never heard of Ronald Greene, have you?

But the Ronald Greene case is turning into a thing now, at least locally, because the body-cam video, which is a lot worse than any of these others, leaked to the AP.

Greene’s family saw the body camera video a year ago. Louisiana’s Democrat Gov. John Bel Edwards showed it to them. They filed a wrongful death suit. There’s a federal civil rights investigation going on about the case. The commandant of the Louisiana State Police quietly retired last year. His successor has declared there’s no systemic racism among the state troopers, which means virtually anyone who flees from a traffic stop is subject to being beaten to death in a roadside execution. That ought to make the folks from Oil City to Grand Isle feel just swell, right?

You might start to hear a bit about the Ronald Greene case now that the horrific video of his killing has surfaced. Don’t let the Critical Race crowd pretend this is the first they’ve known about it. They’re lying.

No one looted and burned, no one rioted, and no one even protested. Why? Because Louisiana had a Democrat governor who was up for reelection in the fall of 2019, six months after Greene’s death, and at the time it was very touch-and-go whether he could get reelected. So everyone stayed quiet, and Edwards won a squeaker of a race with more black votes than Barack Obama got in Louisiana thanks to massive, massive amounts of money dumped on the street in New Orleans, Baton Rouge, and Shreveport.

And the vast, vast, vast majority of those black voters in Louisiana knew absolutely nothing whatsoever about Ronald Greene. Think they would have turned out for John Bel Edwards if they’d known they were voting for a white governor whose family had a history of slavery and segregation and who had soft-soaped, if not fully covered up, a wanton, outrageous police killing of a black man?

Nobody at Black Lives Matter gives a hot damn about all the black kids killed in the nightly gunfights in Chicago and other urban hellholes fully controlled by Democrat political machines with which they’re allied. It’s only when white cops kill career criminals or high-as-a-kite felons that the “mostly-peaceful” protests happen. But then, when there’s an actual legitimate outrage like in the Ronald Greene case, which would cost them political power to express righteous indignation over, they won’t lift a finger.

And what does that political power do for the people they supposedly represent? Every single place they control descends into poverty, hopelessness, grievance, and violence.

But there must be George Floyds and Rayshard Brookses and Breonna Taylors and Michael Browns, and even Trayvon Martins — but not Ronald Greenes. Why?

Because This Is How We Reveal Your Cruelty.

Similarly, there is Hamas. As Dov noted, it’s now four wars with Israel they’ve touched off in the last dozen years. And why? Because without war against Israel they would have nothing. They can’t run any of the territories where they’ve seized power. They’ve proven that. They’re an utter disaster. They’re subscribers to the exact same grievance-based cultural Marxism as BLM is, and the only result of that is failure, atrocity, and conflict.

Israel has put up with this stuff long enough that they’ve come to the final realization you simply can’t give it any quarter. It has to be beaten.

The question is whether here in America we won’t similarly come to that realization and act accordingly.