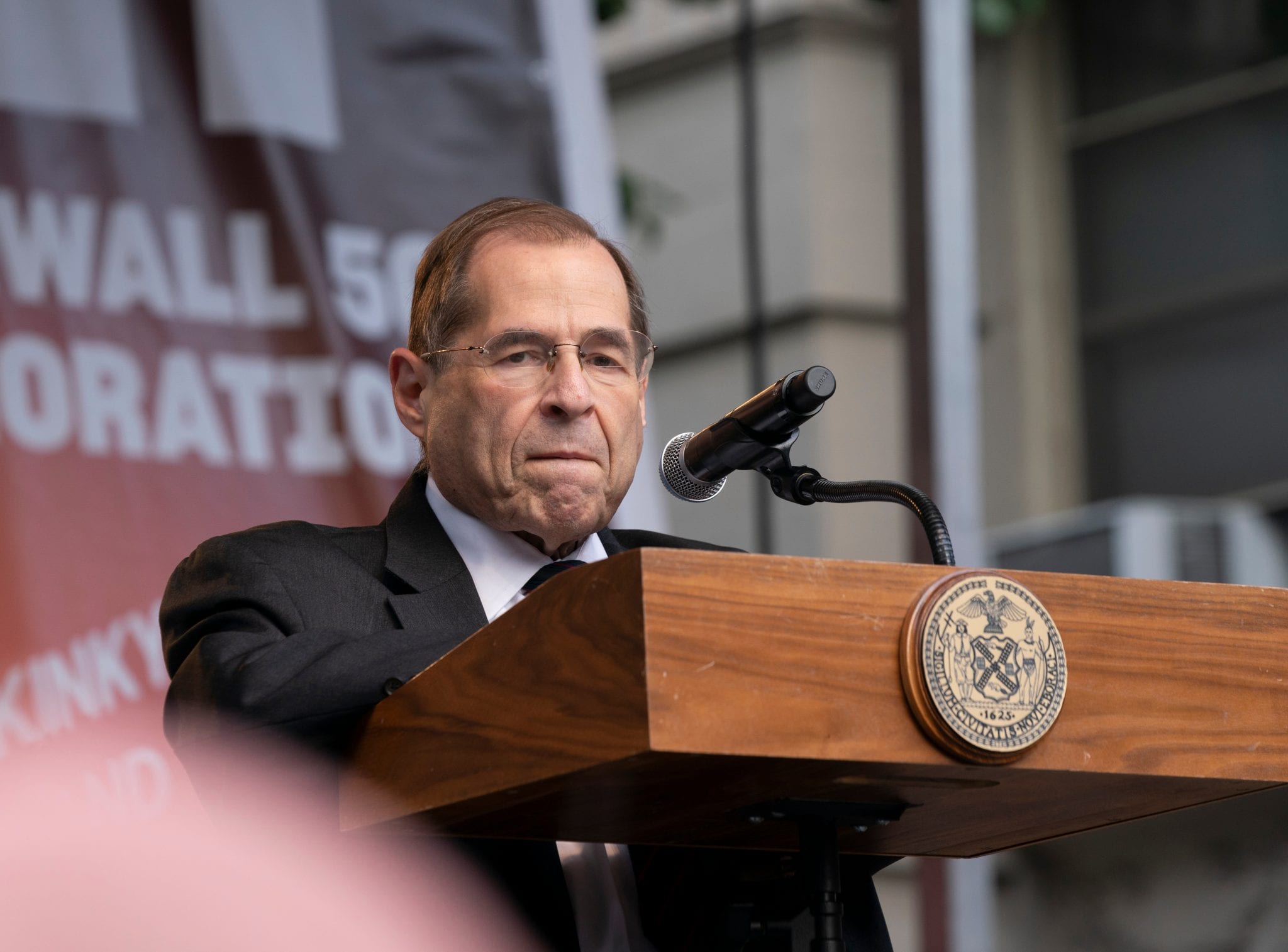 So, Rep. Jerry Nadler (D-N.Y.), chairman of the House Judiciary Committee (HJC), fresh off his committee’s disastrous session with Robert Mueller, has announced his intent to obtain access to the secret grand jury testimony taken during the Mueller investigation. It matters not that Mueller concluded there was insufficient evidence to bring charges against President Trump; he and his entire two-year investigation are now being disowned by ardent Democrats dead set on impeaching the president. Nadler’s hope is to uncover some testimony, however remote, that he can claim as the basis for an impeachment initiative.

It is settled law, at least within the District of Columbia circuit, that grand jury testimony is to forever remain secret — and cannot be unsealed even by order of a federal judge. D.C. circuit judges made this abundantly clear in the recently decided McKeever case. Their rationale is clear: grand jury testimony is taken without the opportunity for cross-examination or any refutation whatsoever. It is taken in complete secrecy, untested and unchallenged by anyone outside the confines of the grand jury room and under the promise that it will never be made public (except under limited circumstances not relevant to our discussion).

One way around this problem, of course, is to do what Woodward and Bernstein did during a lull in their Watergate stories. Supposedly, Woodward sweet-talked the Clerk of Court out of the names and addresses of Watergate grand jurors, and then he and Bernstein sought them out for interviews. As the story goes, one of the grand jurors complained to prosecutors and Washington Post counsel Edward Bennett Williams was dispatched to make a personal call on Judge John Sirica to set things right. The task was made easier because Williams was Sirica’s career mentor and Williams and his wife were godparents to Sirica’s daughter. Williams assured Sirica that the duo had not been successful in gaining any interviews.

So there things sat until 2012, when an article by Jeff Himmelman in New York magazine, “The Red Flag in the Flowerpot,” revealed that Post editor Ben Bradlee’s files contained seven pages of typed notes from one of Bernstein’s grand juror interviews. Even though they had lied about this for 40 years, falsely claiming information received from that grand juror had actually come from a campaign secretary labeled “Z,” Bernstein was unrepentant, saying such aggression was appropriate under Watergate’s unique circumstances.

Chairman Nadler knows much of this, so he’s either engaged in pure theater, knowing that his demands cannot be met under existing law, or he believes that Trump is not owed any benefit of allegiance to the rule of law. Nadler and his supporters cite Watergate as the precedent for the transmittal of grand jury information to the House Judiciary Committee — for the specific purpose of helping the Committee to decide whether to recommend a president’s impeachment.

Their reliance on Watergate as a valid precedent, however, is badly misplaced. Yes, Sirica did rule in 1974 that a secret grand jury report (known as the Road Map, since it would lead to information impeaching a president) could be transmitted to the House Judiciary Committee — a decision upheld on appeal to the D.C. Circuit. But documents that have recently come to light show that both of those decisions were tainted by judicial and prosecutorial misconduct.

Here’s the inside story: Watergate special prosecutors convinced themselves that the HJC would never collect enough information to impeach Richard Nixon, precisely because they couldn’t compel grand jury testimony under threat of indictment. They resolved to find a way to transmit what they thought they had learned to the Committee and hit upon a creative approach. The Fifth Amendment specifically states that “No person shall be held to answer for a capital, or otherwise infamous crime, unless on a presentment or indictment of a Grand Jury … ” They would claim the grand jury could issue a “presentment,” a totally unknown and undefined concept, that would lay out a case against Richard Nixon. Of course, the transmittal would be sealed, so it could not be challenged or refuted by Nixon’s defense team.

Because this approach was unprecedented, Associate Special Prosecutor Philip Lacovara recommended, in a memo dated January 21, 1974, that they secretly approach Sirica, before whom the case would come for ruling, in advance to convince him of the wisdom of this approach. That meeting actually occurred on February 11, when Special Prosecutor Leon Jaworski met alone with Sirica to make the pitch, even agreeing to provide the judge with a memo detailing his authority to approve such a unique transmittal. We know this as a certainty because Jaworski dictated a memo describing their discussion the next day. Any ex parte meeting between prosecutors and their trial judge is highly improper, but secretly seeking out the judge in advance of a ruling that he will be called to make is completely indefensible and taints the validity of the entire proceeding.

While coming as a complete surprise to the Watergate defendants and to Nixon’s own defense team, the sealed Road Map was presented by prosecutors on March 1, 1974 to Sirica — who, not surprisingly, approved its transmittal. Sirica’s ruling was promptly upheld on appeal by the D.C. Circuit, sitting en banc. But there are serious problems with that ruling, too: First, Archibald Cox, the original special prosecutor, had secretly approached the chief judge of the D.C. Circuit, David Bazelon, to urge stacking the appellate panels to assure that Sirica was upheld on even the most bizarre of his Watergate rulings. Second, only the Watergate defendants and not Nixon’s defense team participated in the appeal, so there was no actual challenge by the White House itself — and thus no precedential value vis-à-vis the president.

Two other observations are in order. First, while never specifically mentioned in either Sirica’s ruling or the opinion of the appellate court, the Watergate Special Prosecution Force Report confirms that among the materials being transmitted to the HJC were copies of one or more of the infamous White House tapes — tapes that the D.C. Circuit Court had ruled could be properly subpoenaed by the grand jury, but also that the court had ruled separately could not be subpoenaed by either House of Congress, due to the “separation of powers” construct of the Constitution. Thus, both courts knowingly finessed an immense constitutional issue, further undermining the validity of their holdings. Second and finally, for all of the special prosecutors’ efforts, their Road Map proved totally ineffective. It was either too complicated or too obscure for HJC staff to follow. Out of desperation, in May and June of 1974, HJC staff held a series of secret late-night meetings in the special prosecutors’ offices, where more detailed and specific grand jury information was made available.

Grand jury testimony, by law and by design, is to remain secret forever. The Watergate precedent, such as it is, does not undermine this concept. Instead, it shows why grand jury secrecy is key to our rule of law.

Geoff Shepard joined Nixon’s White House staff upon graduation from Harvard Law School and worked for over five years on the Domestic Council. He also was deputy counsel on Nixon’s Watergate defense team. His recent book, Inside the Real Watergate Scandal: Collusion, Conspiracy and the Plot That Brought Nixon Down, deescribes the judicial and prosecutorial abuses of the Watergate prosecutions. He can be reached at geoff@geoffshepard.com.