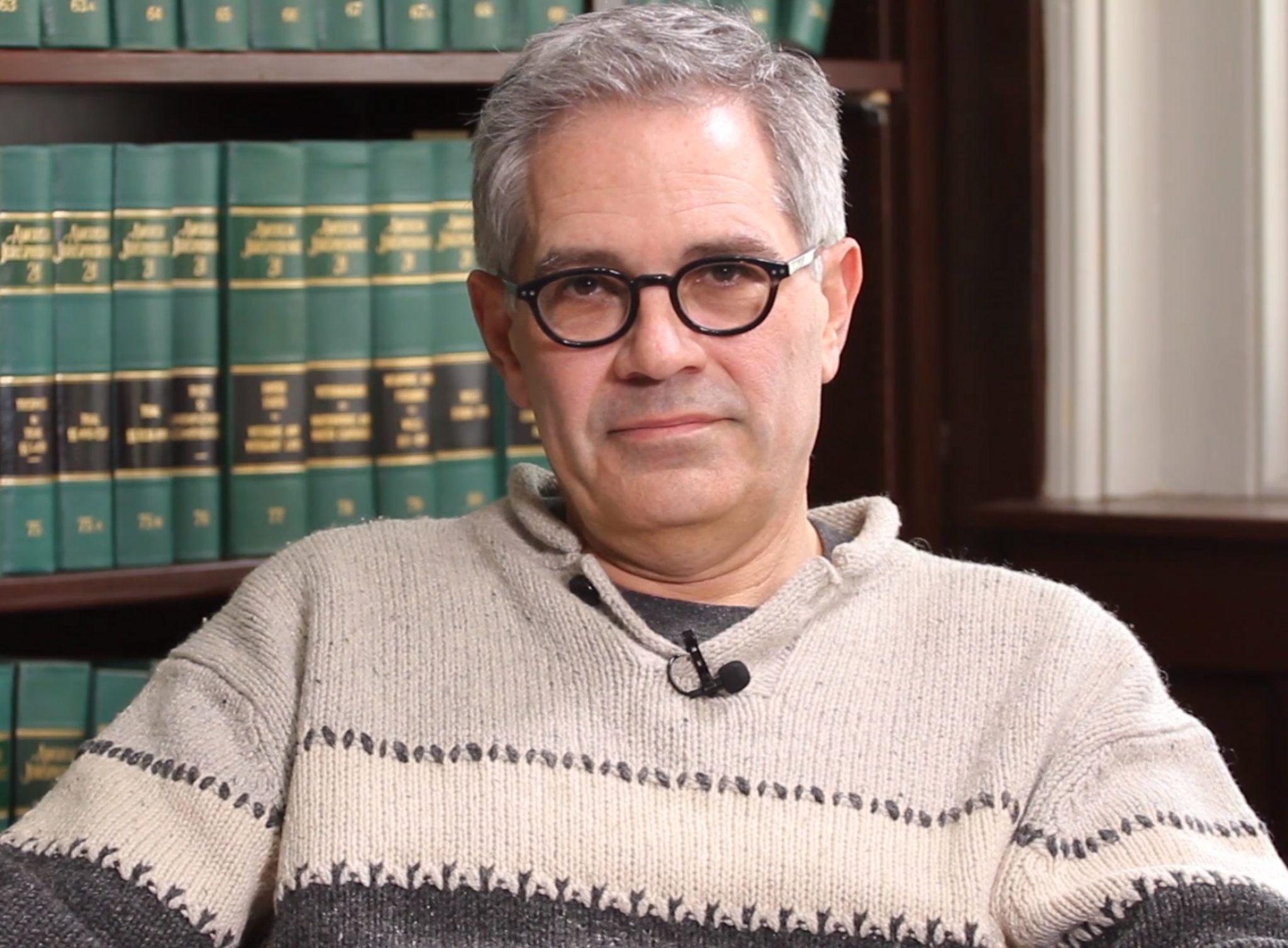 In 1981, Philadelphia Police Officer Danny Faulkner was murdered by Mumia Abu-Jamal.[1] A racially diverse jury convicted Jamal of first-degree murder and sentenced him to death. Since then, he has pursued endless appeals in state and federal courts. Although his death sentence was overturned on a technicality, his conviction has been repeatedly affirmed.

Throughout this lengthy process, the Commonwealth of Pennsylvania was zealously represented by three previous district attorneys. But now the defense of Abu-Jamal’s conviction is in the hands of District Attorney Larry Krasner, the self-styled “public defender with power,” who during his short time in office has established an appalling record of undercharging violent criminals and astonishing indifference to the interests of crime victims.

Krasner was elected district attorney with a $1 million-plus contribution from billionaire George Soros. While this contribution dwarfed all fundraising by previous D.A. candidates, Soros appears to have gotten his progressive money’s worth in Krasner.

After 37 years of appeals, Abu-Jamal has filed a motion for a new trial based on evidence of alleged misconduct by the trial prosecutor that reportedly was only recently discovered and produced by Krasner’s office. How it remained undiscovered  all these years is a mystery. But equally mysterious is why Krasner’s office has never consulted the accused trial prosecutor — who is still very much alive and reachable by a local telephone call — concerning either the newly discovered evidence or the allegations of misconduct.

Instead of contesting those accusations, Krasner’s office text-messaged Maureen Faulkner, the murdered police officer’s long-suffering widow, that it was consenting to allow a hearing to proceed on these allegations. The failure to even consult the trial prosecutor and the unwarranted consent to a hearing on those allegations raised serious questions regarding Krasner’s intentions and his willingness to zealously oppose this latest move by Abu-Jamal to gain his freedom.

Accordingly, in November 2019, attorneys representing Maureen Faulkner petitioned the Pennsylvania Supreme Court to disqualify Krasner’s office from any further involvement in the Abu-Jamal case based on conflicts of interest. The petition is supported by damning exhibits that demonstrate why Krasner should be removed from the case. Among these exhibits is a detailed affidavit by the accused prosecutor refuting each and every claim of misconduct and stating under oath that he has never been contacted by Krasner’s office about these claims.

The petition also points out that the head of Krasner’s appellate unit, which is responsible for defending Abu-Jamal’s conviction, previously represented Abu-Jamal in the appeal of his conviction. In that regard, the petition avers that, when the head of Krasner’s appellate unit previously represented Abu-Jamal, he filed pleadings in the Supreme Court alleging that Abu-Jamal is innocent and that his conviction was the result of “fabricated evidence, subornation of perjury and a false confession.” In addition, the petition sets forth that Krasner himself publicly has described the former prosecutors who fought to uphold Abu-Jamal’s conviction as “war criminals.”

Maureen Faulker’s daring petition was a long shot. It sought the intervention of the Pennsylvania Supreme Court under its supervisory authority, conferred in 1722 when Pennsylvania was a colony. The court rarely grants such King’s Bench petitions, and when it does the issues to be adjudicated pertain to matters of the general public welfare. That is why, when the petition was a filed, I wrote the following in the Philadelphia Inquirer:

The Pennsylvania Supreme Court should consider Faulkner’s petition in the overall context of the disaster that has befallen the people of Philadelphia with the election of Krasner. While she seeks Krasner’s removal from her husband’s murder case, her petition serves the broader societal interest of seeking the court’s help in placing limits on what Krasner seems to believe is his unbridled discretion to abrogate his obligation to zealously and fully enforce the law.

Hopefully the court will remove Krasner from the Abu-Jamal case so that Pennsylvania’s attorney general may take over and vigorously oppose the murderer’s latest bid to get out of prison. Maybe then, chastened by the Supreme Court and with the example of the attorney general zealously defending Abu-Jamal’s conviction, Krasner will begin to realize that as a prosecutor he has a sacred duty to protect the public whom he purports to serve.

Although Maureen Faulkner’s lawyers later filed a supplemental brief documenting further evidence of conflicts of interest by Krasner’s office, the question of whether or not the court would act on the petition remained in serious doubt.

But earlier this week and against all expectations, the court issued an order staying Abu-Jamal’s appeal and advising that it was appointing a Special Master to investigate the matter. While this is not an outright victory for Maureen Faulkner, it is nevertheless a huge development. It means that the court is concerned enough about Krasner’s conduct to exercise its rarely used King’s Bench jurisdiction to appoint a neutral party to, in effect, investigate the Philadelphia district attorney and his office.

This remarkable development followed by a matter of days a similarly unusual ruling in federal court in the case of death row inmate Robert Wharton. As described in the opinion of U.S. District Judge Mitchell Goldberg, who is hearing Wharton’s habeas corpus petition, in 1984, Wharton broke into and vandalized the home of Ferne and Bradley Hart. He mutilated family photos and defecated on the floor before departing.

But this was just his warmup act.

As set forth in Wharton’s confession, on the night of January 30, 1984, he and an accomplice again broke into the home, tied up the Harts, and proceeded to watch television for several hours while deciding what to do with the couple.

“The wife, Ferne Hart, was then bound in duct tape, taken to the second floor, stripped almost entirely naked and drowned in the bathtub,” the judge wrote in an opinion. “The husband, Bradley Hart, was taken to the basement and strangled to death with an electrical cord while being forced to lay face down in a pan of water.”

The judge added, “Not satisfied, and knowing that the couple’s 6-month-old was also in the house, Wharton turned the heat off and left the child alone in the house in the dead of winter to freeze to death. Found two days later, the infant barely survived.”

A Philadelphia jury convicted Wharton and sentenced him to death. Throughout the intervening decades, the Philadelphia District Attorney’s Office steadfastly opposed Wharton’s habeas corpus challenges to his death sentence. But all that changed under Larry Krasner’s leadership.

In a stunning reversal, Krasner without explanation has requested that the death sentence be dropped. Goldberg refused that request unless Krasner could provide a specific reason for dropping the death sentence.

“After so many years of advocating for a death sentence, the District Attorney’s Office has now come to believe Wharton’s sentence violates the Constitution. And this concession is made without a single explanation,” Goldberg wrote. “To accept that view ‘blindly’ and summarily grant habeas relief without independently reviewing the merits of the remaining claim would be an abdication of my responsibility to perform the judicial function.”

Goldberg has called for a hearing at which the state Attorney General’s Office, acting as a friend of the court, will call and cross-examine witnesses. In justifying this highly unusual move, Goldberg wrote that another opinion was needed to determine whether or not Krasner’s decision to stop opposing Wharton’s death sentence was justified given the decades of opposition by preceding prosecutors.

In his opinion,  Goldberg stated that “there is simply too much information to evaluate without the benefit of an in-court proceeding” and Krasner’s dereliction has necessitated the attorney general’s involvement.

“Given the district attorney’s reluctance to fully investigate this matter and explain its concession of the death penalty, I conclude that the attorney general’s participation at the hearing is necessary,” Goldberg wrote.

Goldberg ordered that communications between the victims’ family and the District Attorney’s Office be disclosed, as Krasner claimed the decision to abandon the death penalty was based in part on those discussions.

“The district attorney’s communication with the victims’ family serves as one of the bases for its concession on the remaining issue in this case. It appears that these communications are at issue. The attorney general has alleged that the family members of the deceased were not contacted about this phase of the case,” Goldberg said. “The stark differences in the portrayal of the victims’ family’s views are another reason why a full hearing on Wharton’s remaining habeas claim must occur.”

Goldberg added that the victims’ survivors have the right to testify at the hearing.

So there you have it. In the space of one week, two courts have taken extraordinary steps to rein in Larry Krasner, George Soros’ man in Philadelphia. In the overall scheme of things, these actions will do little to afford the citizens of Philadelphia the full protection of the law to which they are entitled.

But, if the end result is nothing more than keeping cop killer Mumia Abu-Jamal in prison and the vicious Robert Wharton on death row, then at least to that limited extent George Soros’ pernicious campaign to remake the criminal justice system in Philadelphia and elsewhere will have been thwarted.

Small victories in the grand scheme of things, perhaps, but necessary and welcome nonetheless.

[1] Author’s note: In the interest of full disclosure, I am close friends with Joseph McGill, my former colleague in the Philadelphia District Attorney’s Office who successfully prosecuted Abu-Jamal for the Faulkner murder. I know and admire and have provided legal services to Faulkner’s courageous widow, Maureen. Finally, many years ago, I agreed to represent an African American who had been in the emergency room where Abu-Jamal was brought for treatment within minutes of his shooting Faulkner. This bystander heard Abu-Jamal angrily proclaim that he had killed Faulkner.