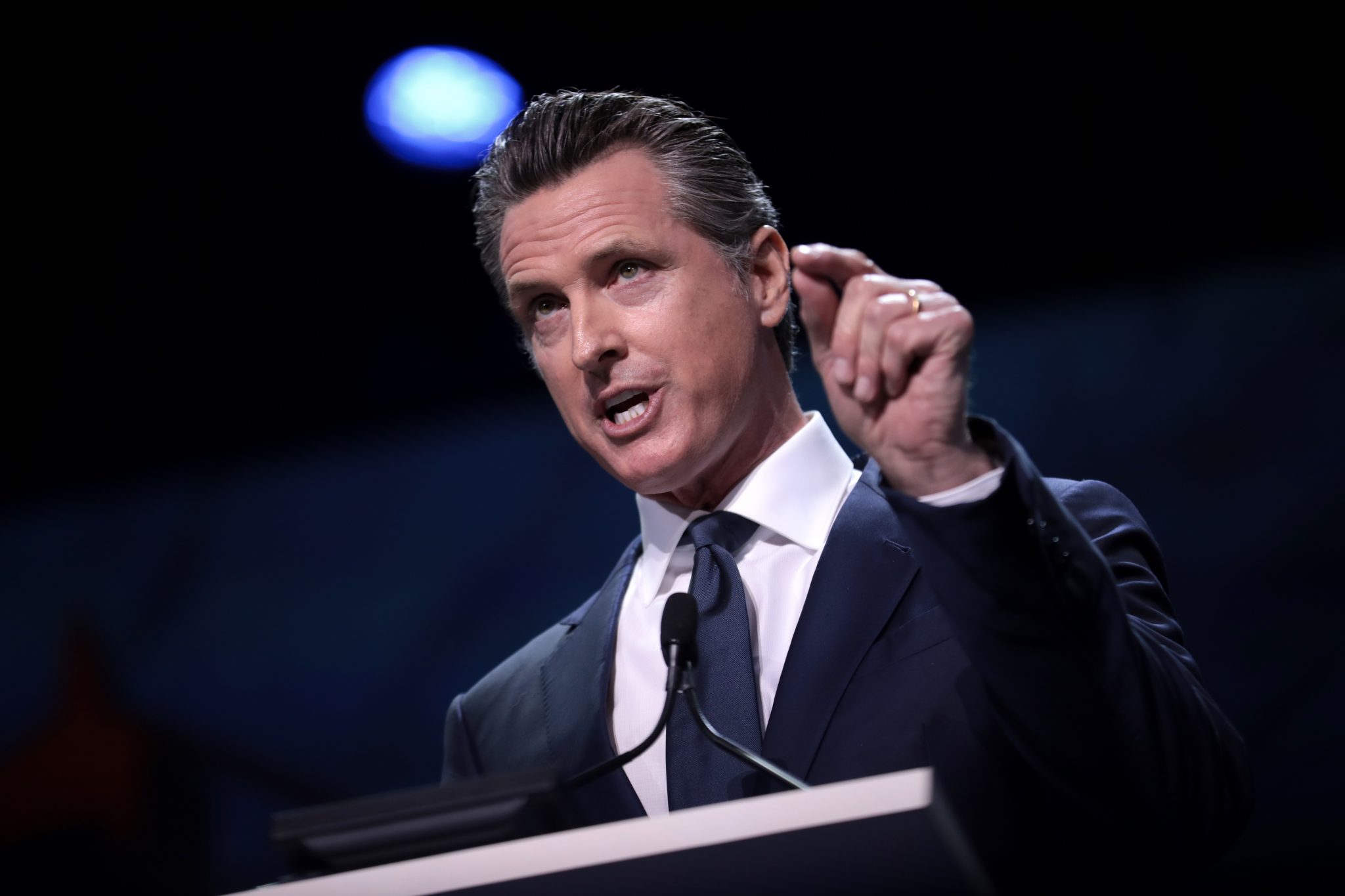 Welcome to California, where our dictator has movie star hair, a dayglo smile, and an impeccably progressive resume.

What he likely doesn’t have any longer is the support of a majority of his constituents.

Californians don’t like to break the law, except when it comes to speeding. Maybe the nice weather discourages civil disobedience. But after Gavin Newsom’s latest diktat on December 3 — his most onerous closure and stay-at-home order since March — millions of citizens in the Golden State have reached their breaking points. With the tremendous economic, mental, and physical costs they’ve borne because of school closures and economic shutdowns, many of them are beginning to suspect that their sacrifice hasn’t been worth it. They’re even starting to wonder if Newsom’s irresponsible orders are making matters worse for their families, their state, and their country.

In other words, they’re mad as hell, and they’re not gonna take this anymore.

When COVID hit the state back in March, Gov. Newsom — aka Prince Gavin, Governor Hairdo, Gruesome Newsom — began issuing the first of his executive orders without the input of the state legislature. As Generalissimo, Newsom relishes giving lengthy press conferences in which he delivers long-winded, self-aggrandizing speeches filled with an endless torrent of clichés and corporate buzzwords. He “leans into problems,” “believes in science,” and stays “proactive.” He “unpacks issues,” “moves the needle,” and “looks under the hood.” He’s a “game changer” who “hits the ground running.”

Yet behind his glib patois and his lip service to “localism” and “community choice,” Newsom is operating a command-and-control autocracy in California. Since March, he’s signed more than 58 executive orders relating to COVID and other issues. Even after several judicial decisions condemned his unilateral actions, he’s shown no interest in letting counties (or the state legislature, for that matter) devise their own solutions to local problems.

His latest order prohibits in-person, indoor Christmas services or any in-person Christmas gatherings for people from more than one household. It restricts movement outside the house (including travel) to “essential services.” Hotels must close their doors to out-of-town guests. Retail stores are limited to 20 percent capacity. All outdoor dining is prohibited (indoor dining has been banned since July), and bars, wineries, nail care, personal services, barbershops, and salons must close their doors until at least December 28. Newsom’s heavy-handed restrictions on religious services also remain in place, despite two recent Supreme Court decisions striking down similar unconstitutional limits on the right to worship.

(Not surprisingly, northern California has so far avoided the stricter protocols, which means you can still get a glass of overpriced, over-oaked Chardonnay at Newsom’s PlumpJack Winery in Oakville.)

Californians’ anger at the San Francisco Sun King over his shutdown orders — and his own failure to follow them — has been bipartisan.

In mid-November, Newsom’s hypocrisy was laid bare when he was photographed eating indoors (in violation of his own rules) with a health-care lobbyist and others at the French Laundry, a lavish Yountville eatery with a fixed-price menu starting at $350.

Last week, the sheriffs of Los Angeles, Riverside, Orange, and other counties criticized the sweeping new restrictions. Riverside County Sheriff Chad Bianco was the most vocal in his disdain, calling the closures and stay-at-home orders “flat-out ridiculous.” He assured residents that none of his officers would attempt to enforce the new orders. Orange County’s Board of Supervisors has publicly proposed a resolution slamming Newsom’s “one-size-fits-all” approach. Officials in others cities and counties are preparing similar resolutions.

“I’m not sure we know what we’re doing,” wrote San Mateo County Health Officer Scott Morrow in a statement he posted on the health department’s website this week. Although he supported the spring lockdowns, Morrow argued that another expansive closure makes no sense.

Even Los Angeles, which has seen the brunt of COVID cases, is showing signs of rebellion. On December 5, Angela Marsden, a local bar owner in Los Angeles, tearfully explained in a viral YouTube video how Newsom forced her to close her outdoor eating area, even though an identical area next to it was allowed to operate under a loophole exempting movie production companies. Actor Michael Rappaport has a similar video in which he loudly (and profanely) tells Newsom and Los Angeles Mayor Eric Garcetti exactly what he thinks of the shutdowns.

On Wednesday, I decided to see for myself if merchants in my midsized city in Riverside County were engaged in civil disobedience. To my delight, I discovered widespread defiance. While nearly all local wineries were closed, several had effectively become speakeasies, allowing guests to eat and drink on their outdoor patios. Of course, the enormous Indian casino in town has disregarded all state orders since June. In our bustling Old Town, most restaurants and pubs were open for business, with patrons seated under outdoor heaters on the patios or even inside. All over town, bars, restaurants, nail salons, barbershops, and tattoo parlors were either covertly or openly defying Newsom’s order.

Besides inspiring outright rebellion, the indignation and pain generated by the new order have reignited the recall campaign against the governor, which had stalled during the presidential election.

Physician and Admiral Brett Giroir, the testing czar for the White House Coronavirus Task Force, recently addressed new executive orders like those in California, saying there is no data that indicates outdoor dining or outdoor bars need to be shut down.

“It’s time to nuance,” said Giroir. “This is not March or April. This is December. We know what the science says, we know there are countermeasures that are effective.” He added, “Shutting down completely, particularly if you don’t have evidence, can be counterproductive … [I]t frustrates the population because it’s not evidence-based.”

While Newsom hates nuance — why use a scalpel when you can use a chainsaw? — he’s always careful to invoke “science” in support of his orders. Yet other leaders around the country, with access to the same scientific evidence, have chosen means and goals more compatible with health, liberty, and common sense. They analyze the data and try to determine why, when, where, and how cases are rising. Then they balance costs and benefits to best serve the needs of their diverse populations.

Thanks to Newsom, California has been subject to the most burdensome COVID restrictions outside of Hawaii. The state was shut down earlier and longer than anywhere else. Masks have been required in all commercial establishments since June. Despite these measures, the state ultimately suffered most of the same ebbs and surges as other Western states, but with much worse economic losses. The new spike in COVID cases and its accompanying economic distress now threaten to destroy forever the governor’s dubious claims of managerial superiority.

As C. S. Lewis once wrote, “A tyranny sincerely exercised for the good of its victims may be the most oppressive…. Those who torment us for our own good will torment us without end, for they do so with the approval of their own conscience.”

Californians who are sick and tired of their governor’s torment are starting to ignore or flout his orders. Newsom would be wise to heed their criticism. If he doesn’t, two things will happen. One, his future in politics at the state and national level will grow ever dimmer. Two, even voters in deep-blue California will consider taking out their anger on Newsom’s fellow Democrats up and down the ballot in the next election.

All in all, both prospects would be very good for the country.