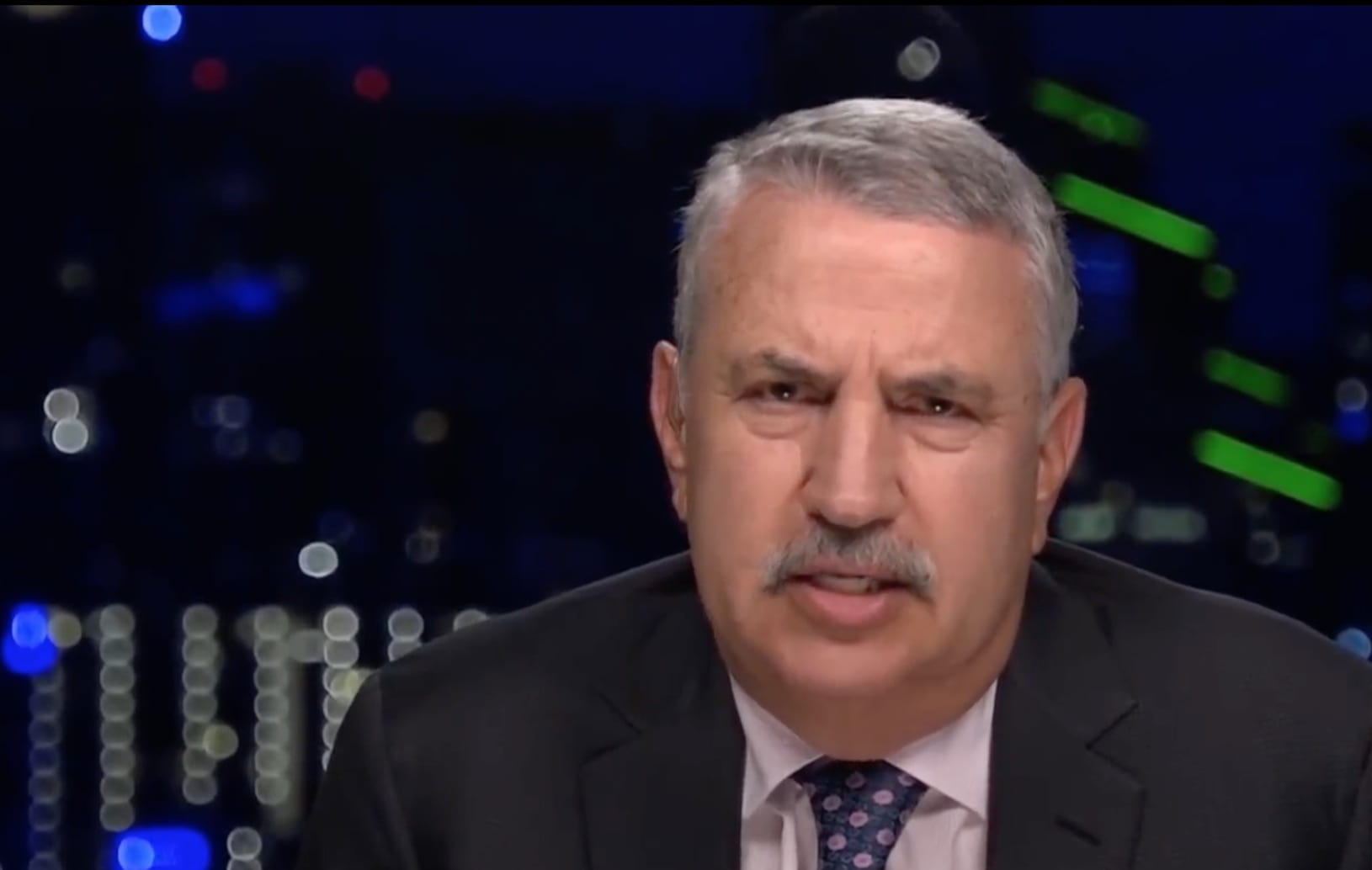 In a rare demonstration of humility, the New York Times’ Thomas Friedman is making the rounds boasting of the popularity of one of his recent columns.

The legendary reporter and author of such books as From Beirut to Jerusalem and The World is Flat recently told CNN’s Brian Stelter the popular piece is “the most widely circulated column I’ve ever written.”

So what exactly was Friedman’s epiphany capable eliciting such a massive public response? What else: a poorly thought out attack accusing the President of being either incompetent or inherently evil. Or, of course, both.

Writes Friedman in “Whatever Trump Is Hiding Is Hurting All of Us Now”:

Our democracy is in serious danger. President Trump is either totally compromised by the Russians or is a towering fool, or both, but either way he has shown himself unwilling or unable to defend America against a Russian campaign to divide and undermine our democracy.

For there is another, much more sane hypothesis to explain Trump’s inaction: he’s unwilling to damage a sensitive and very vital political relationship over a Russian effort that, while not to be ignored, resulted in little more than P.T. Barnum-like protest stunts and anti-Hillary Internet memes.

Trump has long made clear his intention to improve relations with the Russians; Kremlin cooperation could help the White House navigate numerous issues such as international terrorism and the escalating threat on the Korean peninsula.

Is that cooperation really worth sacrificing for allegations that don’t even mention the Russian government itself? While the Kremlin was likely involved to some degree, any President would be wise to secure such details before counterpunching a geopolitical foe.

Even better, in context the Russian effort seems little more than politics as usual, something someone with Friedman’s supposed political chops should well understand.

The State Department awarded nearly $350,000 to OneVoice, a nonprofit that completed its peace project in 2014 and then handed over its resources to Victory15, an Israeli PAC trying to oust Netanyahu in the 2015 election, said the Senate’s permanent subcommittee on investigations.

Funny, I don’t recall Friedman railing against that particular election interference. If Trump is guilty of anything, it’s turning once-sober newsmen into masters of melodrama and hyperbole.

Besides, this isn’t Russia’s first rodeo. In fact, it’s small potatoes compared to their past efforts, which included fomenting the “peace” and “nuclear freeze” movements in an attempt to counter the West’s military superiority.

Former Presidents didn’t overreact at these revelations, either. Like Trump they understood well that much of politics is picking your battles.

Not surprisingly, he conveniently ignores the fact that Barack Obama did nothing to stop Russian interference despite being made well aware of it.

But why would he? After all, the Russian threat is so 1980s!

But this is Trump’s Presidency now, the left likes to say. Fine. Let’s assume then, for the sake of argument, that he were to take action against the alleged Russian meddling. Do we really expect Friedman and his Chicken Little colleagues to applaud Trump’s efforts?

Fat chance. The soap opera stars in the mainstream media would simply accuse the President of covering his tracks. One can see the headlines now: “You ain’t fooling nobody Donny.”

Besides, were he to risk what little goodwill remains with the Russians for a media freakout rooted firmly in disappointment that Hillary Clinton isn’t President, Trump would be giving credence to the media narrative that Russia did indeed tip the election. And, by extension, hurting the legitimacy of his presidency.

And like it or not, it is indeed legitimate.

Mueller’s indictments reveal that rather than attempting to alter the results of the election for Trump specifically, Russia’s aim was to create discord, which meant promoting propaganda across the political spectrum, including on behalf of far-left longshots Bernie Sanders and Jill Stein.

The defendants allegedly conducted what they called information warfare against the United States, with the stated goal of spreading distrust towards the candidates and the political system in general.”

Hardly the Trump/Putin partnership the media has been peddling since the second Trump took office.

So congratulations, Mr. Friedman, on the success of your comically simplistic analysis.

In the age of the Internet, however, you would do well to remember that all of those shares might not be pats on the back; a good portion, no doubt, are mocking your attempts to demonize the President for putting practicality over the lowest form of American politics.