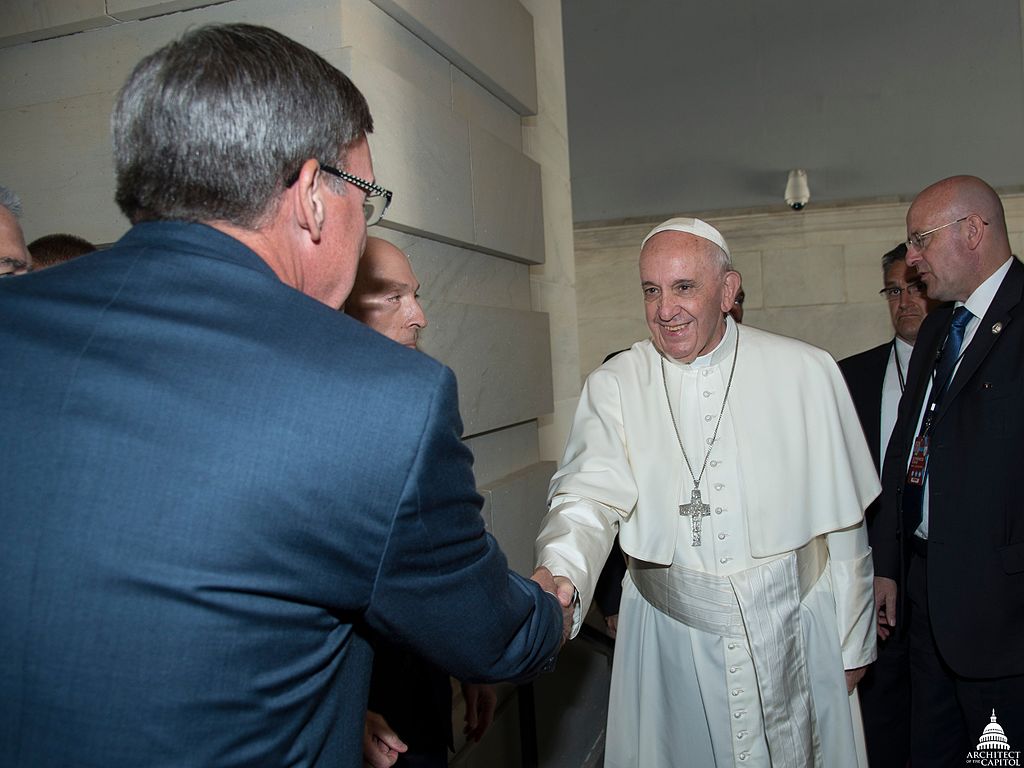 Atlanta Archbishop Wilton Gregory was a protégé of the late Cardinal Joseph Bernardin, who played a leading role in the Gaying of the Catholic Church in America. In a nod to that legacy, Bernardin requested the Windy City Gay Men’s Chorus perform at his funeral. As an auxiliary bishop under Bernardin in Chicago, Gregory witnessed the spread of homosexuality within the priesthood and hierarchy up close. Bernardin’s seminary was known as the “pink palace.”

As archbishop of Atlanta, Gregory has maintained Bernardin’s program of gay promotion and propaganda in the Church. Gregory, for example, has defended the writings and speeches of Fr. James Martin, a Jesuit who openly calls for the Church to adjust herself to the demands of the “LGBT community.”

In 2010, Fr. Juan Areiza, one of Gregory’s priests, got entangled in a gay scandal exposed by CBS Atlanta. Areiza and another priest had fastened their lustful affections upon a gay bar patron named Dale Chappell, who complained to CBS Atlanta that the two priests “conspired together to just to use me for sex.”

“Text messages and pictures Chappell provided to CBS Atlanta News confirm his allegations of these homosexual relationships, including dozens of texts with Areiza,” reported the station. “‘Here’s one that says, ‘Miss you and love you,’ Chappell showed us.”

Where is Areiza today? He is the pastor at St. Pius X parish in Conyers, Georgia, appointed to that position by Wilton Gregory in June of this year.

All of this makes Gregory’s famous comment, made as the 2002 abuse scandal erupted, that “It’s an ongoing struggle to make sure the Catholic priesthood is not dominated by homosexual men” all the stranger. Why he made that comment, given his complicity in the Gaying of the Church, remains a mystery. He was and is a member of a powerful liberal ideological faction that normalized homosexuals in the priesthood and hierarchy.

I bring Gregory up because I learned this week from a Church insider that Gregory is “under consideration” to succeed Donald Wuerl in Washington, D.C. Out of conservative backlash to the louche and leftist New Jersey Cardinal Joseph Tobin, I am told, aides to Francis have been scrambling to consider candidates less radioactive than Tobin, who remains a favorite of the pope.

Not that Gregory is much of an improvement. If a Tobin candidacy represents a raised middle finger to the laity from FrancisChurch, its look at Gregory signifies at least a flick of the chin. Neither prelate belongs on a short list for Washington. Tobin is the more overtly outrageous of the two choices — his erstwhile rectorymate Francesco Castiglione, is still lurking (I received a credible report that the Italian actor is now hanging out in Summit, New Jersey, perhaps waiting to see what happens with Tobin) — but both are bad. Were the Church under Francis committed to real reform, Tobin and Gregory would have been erased from the list immediately.

A Gregory appointment would signal business as usual, all the way down to Gregory’s Wuerlian taste for opulent living. While Wuerl more or less got away with his furtive renovations to his Embassy Row penthouse, Gregory was upended in 2014 by his plan to live in a Tudor-style Atlanta mansion. He had to unload the $2.2 million property in the swanky neighborhood of Buckhead after building it, saying that in the age of Francis living there would undermine his own “integrity and pastoral credibility.” He wrote to Atlanta Catholics: “I failed to consider the impact on the families throughout the archdiocese who, though struggling to pay their mortgages, utilities, tuition, and other bills, faithfully respond year after year to my pleas to assist with funding our ministries and services.”

It would be grimly comic if Gregory inherited Wuerl’s posh pad, which I am told Wuerl has left (only to turn up, I’m told, at the $2 million house at 4110 Warren Street, where McCarrick was hidden until Wuerl whisked him off to a friary in Kansas).

Given the continuing crisis — earlier this week it was reported that Cardinal Timothy Dolan of New York City has suspended Auxiliary Bishop John Jenik over a “credible” accusation of abuse — one would have thought Francis might look outside the corrupt alumni circles of Joseph Bernardin and Theodore McCarrick for the supposed “fresh start” DC needs. But Pope Francis is nothing if not committed to the “Seamless Garment” of Bernardin, who, along with Rembert Weakland (the Milwaukee archbishop who spearheaded a letter against the “greed” of Reaganomics while simultaneously paying off a disgruntled gay lover with a self-authorized “loan” from the faithful’s donations) was one of the chief forerunners of this “social justice” pontificate.

Bernardin’s garment covered not only the clericalism of an aggressively dilettantish leftism (which the agenda of Pope Francis perfectly represents) but also a pervasive homosexual subculture within the Church. Many of the clerics caught up in the abuse scandal combined homosexual decadence with labor politics, amnesty activism, environmentalist hijinks, and the like.

Jenik appears to be cut from the cloth of Bernardin’s garment, making a lot of noise about “justice” by day while treating a young man unjustly by night. Jenik’s alleged victim says he was forced into the Bronx labor priest’s bed repeatedly.

After hearing the Jenik news, I wondered which prelates presided at his 2014 installation Mass as auxiliary bishop. One of the co-presiders at the Jenik’s installation Mass was Cardinal Edwin O’Brien, a credibly accused member of the Church’s Gay Mafia. But guess who else was there, presiding prominently at the altar and conferring his sinister blessing upon Jenik? Theodore McCarrick.