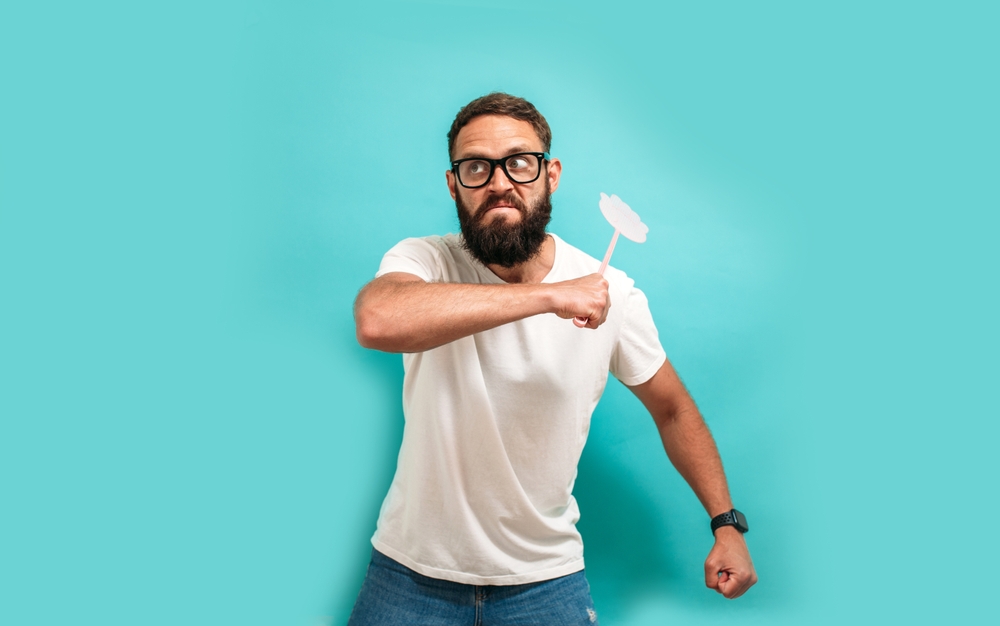 Of all the animals on Earth, there is only one capable of sparking a nuclear catastrophe, causing a pileup on the highway, and making several people fall down the stairs simultaneously. It is the fly. That genetic accident. That damned buzzing. That horrible bug. They say that Noah did not save a place for it on the Ark, but with its characteristic stubbornness it traveled floating over the boat until the end of the flood, deaf to the general booing from the rest of the animals.

The fly is an animal with incredible reflexes. The spotted-ass monkey is mistakenly thought to be able to escape from hunters’ bullets. But the fly flies. Its ability to dodge a punch is especially aggravating. That’s a virtue that the ant, for example, cannot claim to have. Also, it’s so cocky. The fly shows the determination of a kamikaze pilot. Six times out of 10, when you are sure you have killed it with the newspaper, it reappears like an unbeatable light aircraft in an episode of The A-Team, undermining the enemy’s morale.

Despair takes hold of the man besieged by an army of flies on a stormy afternoon. After all the attempts to get rid of them, some people give up and try diplomacy. They offer them biscuits in exchange for a little calm or even an indefinite truce with access to the fridge. But the fly is a pest in its nature. This means that it can only live by being a pest. When the fly can’t be a nuisance, it dies. That’s why, if you leave a country house closed for two or three months, when you come back you find hundreds of flies stuck to the walls and ceiling. They have died of sheer boredom. It’s a bug that needs to be constantly getting on someone’s nerves. Dialogue with flies is a waste of time. Also, I suspect that, like most dumb insects, they are deaf. And don’t make me check Wikipedia to confirm this. They are deaf, period. And if they’re not, they are now.

Last night I was trying to take a shower, something that happens every day. The summer shower is extremely relaxing after a day at the beach. Suddenly the hot water, those amorous vapors, and … a Ball-busting Fly (Musca testicularis confractus) is buzzing around, landing on every body part onto which you wouldn’t dare to unload a revolver. (READ MORE from Itxu Díaz: The Frightening Filth and Violence of Today’s Beaches)

Finally, when you have a weapon like the shower head in your hand, it’s hard to resist the temptation to drown your enemy. First you try to give it a treacherous little squirt, while the fly rubs its little legs on the side of the bathtub. But it survives the rain. Later, you try again, this time making a bowl with your hands to collect all the water in the world and let it pour down all at once onto it. At this point your eyes are already unfocused, and a nervous twitch is throbbing in your temples. Then the fly dodges the shower again and takes flight towards the bathroom ceiling. You can hear the thrumming rrrrrrrrrr, like a World War II fighter-bomber.

I know how this story ends. You, who have already lost your temper, chase it with the shower head, water spraying all over the bathroom, the towels, the cabinet, the sink, the wall, the mirror, and finally the light switches. After the jet to the switches, a circuit shorts, fire breaks out, and you die both burned and wet with a fly perched on the tip of your nose.

Three days later the fly will die of boredom. Every cloud has a silver lining.

A certain logic will have us believing that insects are scared of fire. Not all of them. Again, flies do not seem very concerned about the issue of flames and even come to warm their eggs on the edge of those nice anti-mosquito candles. The advantage of fire is that, in direct contact with the fly, it is quite effective. The hard part is getting the bug to fly close enough to the flames for its wings to melt.

The most disturbing thing about the fly is that it lays eggs. I can’t give you a scientific explanation, but I’m sure that every half hour they lay 16 million eggs. From these hatch small flies, with renewed energy, and which are even more difficult to hunt down. So anything you do to crack the flies’ eggs will be well done.

Of all the gadgets that can be bought in bazaars of the last century, the most surprising is the fly swatter, whose name in Spanish exudes optimism: matamoscas (fly killer). The fly swatter is a plastic hand with a corresponding flexible handle that serves to distract you on those long August afternoons and also to irritate the flies. No one has ever managed to kill a fly with a fly swatter, although they have managed to break the china in the living room and even receive a beating to the fly swatter’s classic war cry of “wait, wait, don’t move!”

The fly swatter is a problem for cohabitation. Many couples have split up due to one of the partners’ fly-slaughtering obsession, hitting left and right with this device all over the house, including the legs, arms, and heads of others. The fly swatter is great, but only if, like me, you’re in the habit of using baseball bats and beating each other to decide who does the washing.