But with respect to at least one race, now you get to see the Democrats concurring.

1. The devil went down to Georgia

A lot was made of the hot-mic moment where, on an airport tarmac somewhere, Chuck Schumer was caught talking to Joe Biden about how he thinks Catherine Cortez-Masto has momentum against Adam Laxalt in Nevada (she doesn’t) and how the Pennsylvania debate disaster didn’t really hurt John Fetterman that badly (it did).

But this was when Schumer really told the truth:

🚨Schumer to Biden: "The state where we're going downhill is Georgia. It's hard to believe that they will go for Herschel Walker." pic.twitter.com/m5ELvQAUYO

Yes, Chuck, you really are in trouble:

This after another poll on Wednesday showed a four-point Walker lead.

Which meant that — of course! — the glass was broken and out came Gloria Allred with a scurrilous and stupid accusation by an “anonymous” woman to the effect that Walker had some three decades earlier driven her to get an abortion.

Tom Cotton was campaigning for Walker and, one assumes, got word that the Allred accusations were inbound. This would have been funnier if he hadn’t, but it’s amusing nonetheless:

The Democrats' economic record is so disastrous that they'll soon trot out Gloria Allred with anonymous accusations.

It’s disgusting, but get ready — because things will only get worse from here.

For example, at the Hill, the ancient Democrat operative Bill Press penned an op-ed with both hands mashing down on the panic button. “Time for Democrats to play the fear card,” read the headline. Then Press says:

Unfair or not, Democrats must face the sad reality about politics: Voters are less likely to vote based on what you’ve done for them than on what the other side will do to them.

The key to winning on Nov. 8 is for Democrats to play the fear card. And here, too, Democrats have an advantage. They don’t have to make up all the bad things Republicans would do were they back in power. Republicans are already bragging about them.

Included in his litany of horribles are:

And when that doesn’t work, go full Kavanaugh on the black guy the GOP’s running, right, Bill? Or the black lady, too, right?

Oh, you forgot to accuse Republicans of racism. How come that didn’t make the list, I wonder?

You’ve got to block out 19 minutes of your time to watch this. It’s a campaign speech Ron DeSantis gave in Walton County, in the Florida panhandle, on Thursday. He takes on the educational establishment and its embrace of wokeism — Critical Race Theory, transgenderism, the sexualization of children, sex changes for kids, and so on — and goes through what his administration did to fight it in his first term.

It’s a campaign speech, but it’s more than that. It’s essentially what I’d call the revivalist declaration of war against the woke. And it’s a training video for every conservative politician on how to handle these issues.

We need a gigantic red wall of this:

“The state of Florida is where woke goes to die.”

Here’s what’s running against DeSantis, by the way:

This is Charlie Crist. He wears a mask at the gym. pic.twitter.com/O2EJPolUXl

I’m not going to give too much time to this ancient imbecile, but the narrative he’s pushing came straight out of DNC headquarters, and it’s intended to blunt the public’s disgust with gas prices through the roof (and diesel prices which will break what’s left of the supply chain soon, though perhaps not before the election), and it needs to be responded to:

While you pay through the nose at the gas pump, Big Oil is lining its pockets.

How are they using their record profits?

Spending billions on stock buybacks. Shell alone will be buying back $4B worth of shares.

It's the perfect time to hit Big Oil with a windfall profits tax. pic.twitter.com/irhootcvcz

You’ll see this all over the place — Democrats screeching about oil company profits.

Here’s what they won’t tell you: those are the numbers you would expect to see oil companies bring in when the price of oil hits $75 a barrel or more. The reason the profit levels seem higher now is very simple, and very discouraging.

Namely, oil companies are buying back stock and paying out dividends to their stockholders with those profits because for lots of reasons, which are directly attributable to public policy being made in Washington and other places run by people with fantasyland politics like Robert Reich’s, it’s now a bad idea to reinvest those profits into their operations.

In other words, they’re running out of places to drill, at least domestically. Because the Biden administration won’t open up federal lands for oil leases, or they’ll only do so very begrudgingly, the administration is engaged in a regulatory war on oil drilling in countless ways; it’s gumming up the construction of oil pipelines, which have to be built if oil is to be brought to refineries from new fields in a safe and economical way; and it’s doing everything it can to discourage the financing of exploration and exploitation of the resource.

And so without an easy way to grow supply, which would in turn bring the price down — not to mention the fact that Team Biden won’t stop signaling its intention to destroy the oil industry altogether within the next decade — they’ve made the decision just to keep the money.

Short-term gain, long-term pain, especially when it turns out that bird-fryers and bird-threshers don’t actually power a first-world economy and there’s a dwindling supply of oil and gas because oil companies are rational economic actors that respond to outside stimuli.

Can’t really blame them. But naturally the response from the Democrats is what it always is. They want to steal the money someone else is making.

Can we please start having the discussion about what it’s going to take to put the Democrat Party out of business before it kills American society outright?

4. PayPal really doesn’t want our business and shouldn’t have it

I’ve already trodden this ground before, as I wrote a whole column about it two weeks ago when that asinine $2,500 “liquidated damages” fee that PayPal put into its user agreement for violations of its new “speech code” went up. The change was supposed to go into effect Nov. 3, but when the public outrage over it exploded, the company relented and put out a statement babbling that it was a “mistake” to include that measure and they didn’t intend to publish it.

PayPal’s people said they were going to police “misinformation” with that $2,500 fine. Then they didn’t, and though lots of us proceeded to dump PayPal, the controversy blew over a bit. 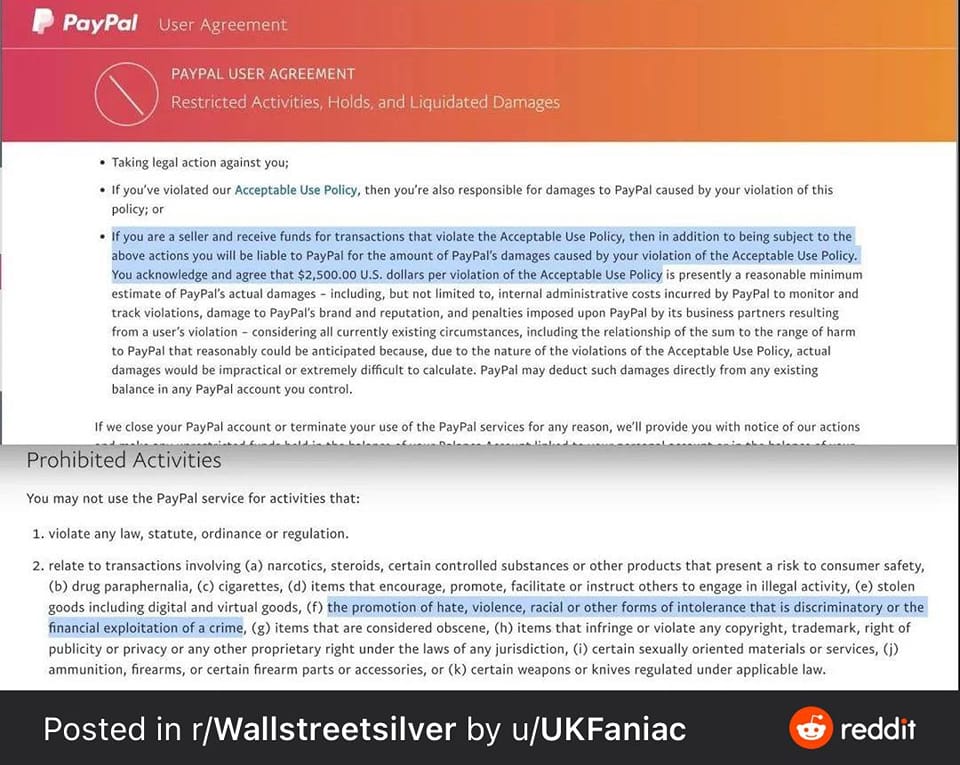 It doesn’t talk about “misinformation” anymore, but the phrase “other forms of intolerance that is discriminatory” is about as broad as the Pacific Ocean.

PayPal is now unusable. To have anything to do with its service is to put one’s head in a lion’s mouth. We need a free alternative that functions as PayPal does. Maybe Elon Musk, who invented PayPal in the first place, will put up a sub-app in Twitter to compete with PayPal:

And if you’re noticing that I’m going crazy with the embedding of tweets in today’s Five Quick Things, that’s intentional. Because of this:

5. And now for that one last thing

You guys already know about The Spectacle podcast, of course, since you already checked out the first episode and now the second, which followed just behind it. So I don’t need to use that as my last thing.

So instead I’ll give you something completely different. It’s two weeks old, but you might not have heard about it. I only did because I had YouTube playing music in the background earlier this week and the algorithm stumbled upon it.

Which was what? “A special one-night-only benefit concert featuring some of Eastern Kentucky’s biggest names in music, was held at Lexington’s Rupp Arena on October 11 & raised over $2.5 million for flood relief. Organized in response to the devastating flooding in the area earlier this summer, the event featured performances by Chris Stapleton, Dwight Yoakam and Tyler Childers.”

I listened to a whole lot of it while I was working on various things, and … damn, that was a good concert. Below are the two sets I found.

If you’re not familiar with Tyler Childers, you’re welcome:

But Chris Stapleton was awesome as well:

So have yourself a happy hillbilly weekend. And by all means, make sure you vote early and often. We need a flood of a different sort, and we’ll call it a relief when it comes.