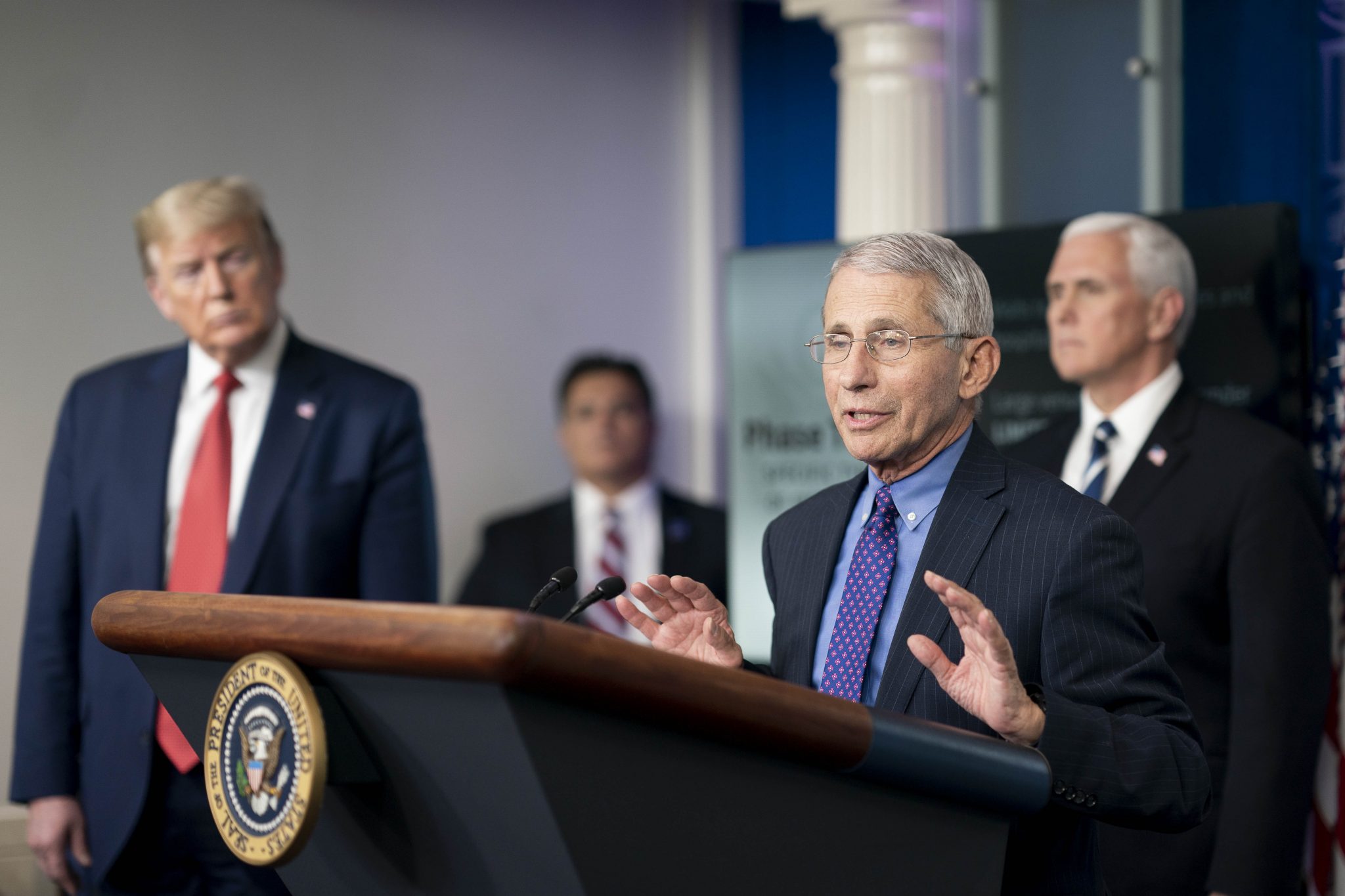 Back on March 30, I posted a column here at The American Spectator noting that when President Trump blew his top over the self-aggrandizing comments of Drs. Anthony Fauci and Deborah Birx, it was a case of too-little, too-late:

But by the time COVID came around, it was pretty obvious the public health bureaucracy was in need of a house-cleaning.

Let’s not forget that the national stockpile of PPE had been depleted during the Asian flu episode a decade earlier and never replenished — by the very people who were still in charge when Trump was inaugurated. That was reason enough to clean house, but the Faucis and Birxes had been deficient in other areas. It’s quite obvious they were unprepared for a major pandemic.

And our public health bureaucrats had stood by and allowed China to dominate the World Health Organization (WHO) to such an extent that Trump was compelled to pull U.S. funding out of it following its acting as stooges for the Chinese Communist Party. Even that didn’t work. The WHO is now spreading the completely implausible line that COVID-19 didn’t come from the Wuhan Institute of Virology, when it looks fairly obvious that it did.

What needed to happen was to fire these people, make the announcement that they weren’t tough enough to beat the virus, reference the replacement of George McClellan with U. S. Grant or Lloyd Fredendall with George Patton, and declare that henceforth federal government policy was going to be to find therapies and cures for COVID rather than attempt to imprison healthy people in an effort to stop the spread of a coronavirus that was already making the rounds nationwide. If Scott Atlas, Jay Bhattacharya, and Harvey Risch were Trump’s top coronavirus people instead of Fauci, Birx, and Robert Redfield, who now, well after the fact, is admitting COVID came from a biolab in Wuhan and that this fact was covered up (where the hell has that been for the past year?), he might actually have gotten somewhere.

I was a bit surprised to see some blowback about that column, particularly from some of the former president’s more enthusiastic supporters — many of the same people who most aggressively resist the current Fauci–Biden mask-and-lockdown foolishness that so grips the public policy space even now.

Because let’s face it, the position that Fauci needed to go last year is a good bit stronger six weeks on than it was when that column was written. And it’s only going to get stronger.

Last week there was a very long, but explosive and illuminating article, published first at Medium and later republished by the Bulletin of the Atomic Scientists, on the source of the Wuhan virus. It was written by Nicholas Wade, the former science correspondent of the New York Times and a 30-year veteran of journalism on the subject, and it makes a quite forceful case that the COVID-19 virus came from the Wuhan Institute of Virology.

There’s a bit of science jargon in it, but a layman shouldn’t have too much trouble deciphering this:

It’s documented that researchers at the Wuhan Institute of Virology were doing gain-of-function experiments designed to make coronaviruses infect human cells and humanized mice. This is exactly the kind of experiment from which a SARS2-like virus could have emerged. The researchers were not vaccinated against the viruses under study, and they were working in the minimal safety conditions of a BSL2 laboratory. So escape of a virus would not be at all surprising. In all of China, the pandemic broke out on the doorstep of the Wuhan institute. The virus was already well adapted to humans, as expected for a virus grown in humanized mice. It possessed an unusual enhancement, a furin cleavage site, which is not possessed by any other known SARS-related beta-coronavirus, and this site included a double arginine codon also unknown among beta-coronaviruses. What more evidence could you want, aside from the presently unobtainable lab records documenting SARS2’s creation?

What’s a gain-of-function experiment? In the relevant case, it’s an effort to manipulate viruses to give them additional capabilities — and specifically with the COVID-19 virus it would be an effort to engineer it to infect humans rather than the bats with which its source was affiliated. Fund China’s gain-of-function coronavirus experiments and you are almost assuredly, intentionally or otherwise, helping China’s bioweapons program, you know.

As for furin cleavage sites and double arginine codons, Wade explains those reasonably well (though not especially briefly) in the article, but they deal with specific properties of COVID-19 that make it infectious to humans and are difficult to explain as a product of nature.

A quote from the eminent virologist David Baltimore, the former CalTech president, describes the significance of those elements:

When I first saw the furin cleavage site in the viral sequence, with its arginine codons, I said to my wife it was the smoking gun for the origin of the virus … These features make a powerful challenge to the idea of a natural origin for SARS2.

Wade’s piece goes into an examination of the blame for the creation and spread of the Wuhan virus. After the obvious, which is to castigate China’s bio-researchers for their lax safety and the Chinese government for its many blunders (or worse), he blasts the virology community for its irresponsible, Frankensteinian affinity for gain-of-function experiments on coronaviruses, and then there is this:

From June 2014 to May 2019, Daszak’s EcoHealth Alliance had a grant from the National Institute of Allergy and Infectious Diseases (NIAID), part of the National Institutes of Health, to do gain-of-function research with coronaviruses at the Wuhan Institute of Virology. Whether or not SARS2 is the product of that research, it seems a questionable policy to farm out high-risk research to unsafe foreign labs using minimal safety precautions. And if the SARS2 virus did indeed escape from the Wuhan institute, then the NIH will find itself in the terrible position of having funded a disastrous experiment that led to death of more than 3 million worldwide, including more than half a million of its own citizens.

The responsibility of the NIAID and NIH is even more acute because for the first three years of the grant to EcoHealth Alliance, there was a moratorium on funding gain-of-function research. Why didn’t the two agencies therefore halt the federal funding, as apparently required to do so by law? Because someone wrote a loophole into the moratorium.

The moratorium specifically barred funding any gain-of-function research that increased the pathogenicity of the flu, MERS, or SARS viruses. But then a footnote on page 2 of the moratorium document states that “[a]n exception from the research pause may be obtained if the head of the USG funding agency determines that the research is urgently necessary to protect the public health or national security.”

Daszak, in this case, is Peter Daszak, a virologist who most recently was the only American invited by the World Health Organization to undertake a fact-finding trip to Wuhan, after which the WHO issued a whitewash statement absolving the Wuhan Institute of Virology of responsibility for the virus. Wade’s article makes significant note that Daszak was recorded bragging about the progress made by the Wuhan Institute’s Dr. Shi Zheng-li, the foremost Chinese expert on bat coronaviruses, in “reprogramming the spike protein and generating chimeric coronaviruses capable of infecting humanized mice.”

That was in December 2019. Three months later, Daszak was howling to anyone who would listen that the virus couldn’t have come from a lab, an assertion the legacy media incuriously swallowed and regurgitated to the American people.

Why? Mostly because President Trump supported the idea that the Wuhan virus came from the Wuhan Institute of Virology, and, as we all know, Orange Man Bad.

All of which is to bring us around to the fact that Anthony Fauci and his boss Francis Collins were funding the kinds of gain-of-function Frankenstein experiments that, it looks more and more likely, ultimately resulted in killing more than three million people across the world and a half-million Americans, if the official numbers are to be believed.

It seems a reasonable judgment that if the head of the National Institute of Allergy and Infectious Diseases was funding research that would manufacture viruses capable of starting deadly pandemics in unsafe laboratories connected to military bioweapons programs in totalitarian foreign countries increasingly hostile to the United States, and this information was known after one of those viruses broke out and started a deadly pandemic, a personnel change would have been in order.

It’s also a reasonable judgment that if the fact pattern established by Wade is legitimate — and this column has seen nothing convincing to the contrary — Anthony Fauci is responsible for the deaths of a half-million Americans, trillions of dollars in economic losses, the indirect influence of a result in an American presidential election, and untold damage to national morale, civil liberties, and trust in medicine, research, and governmental authority.

A whole lot of which was known well before the 2020 presidential election.

I’m not trying to belabor the point here or to castigate Trump. All of this stuff is very much “in the weeds,” and it’s the kind of thing it’s tough to ask the president to step in specifically and fix.

But somebody on the president’s staff needed to examine the available information and recognize the horrifying implications of what had happened before Anthony Fauci was allowed to be put forward as the face of America’s COVID-19 response.

Trump, through that staffer or personally, needed to make a phone call to Collins telling him Fauci’s time was up and he needed to resign, and Collins needed to make that happen quietly. And if that didn’t happen, then both Fauci and Collins would be very noisily packed off to retirement, complete with a Justice Department investigation of their role in funding Dr. Shi, China’s virus-manipulating “bat lady,” through Peter Daszak’s Frankensteinian EcoHealth Alliance.

This column posits that we Americans are governed by people who suck. Well, this, friends, sucks. There ought to be consequences for the suckage. It’s too bad it didn’t happen a year ago; we’d be amid a booming economy in Trump’s second term if it had.