by Itxu Díaz
Anthony Fauci at the White House on April 7, 2020 (Wikimedia Commons) 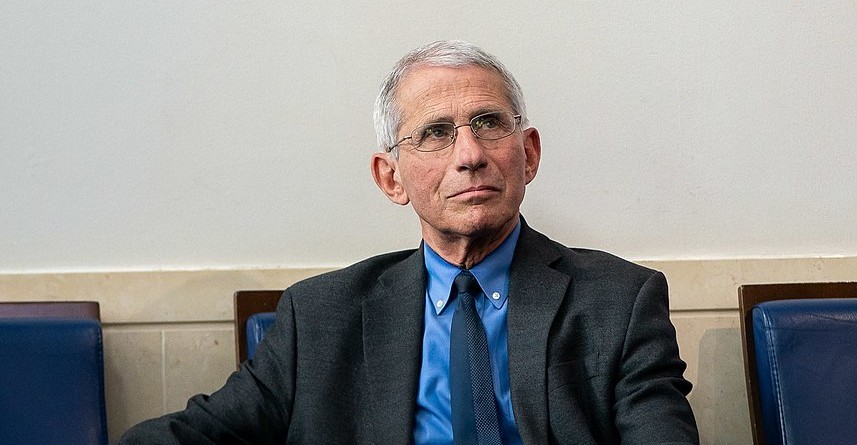 Dr. Anthony Fauci once said that science was him, and Albert Einstein, Isaac Newton, Louis Pasteur, and Alexander Fleming turned in their graves. It’s as if Hispanic singer Ozuna were to say: “Music is me” — I can already imagine Frank Sinatra banging his head against the coffin lid, under the grounds of Desert Memorial Park. You see, contrary to what all those life coaches who record short videos on TikTok say, it’s usually a good idea to limit your self-confidence a bit if you don’t want to end up looking like a perfect idiot.

Dr. Fauci’s upcoming retirement would be good news if it had occurred moments before his first attempt to cover up the lies of the Chinese communist regime. I still find it surprising that someone who knows so much about infectious diseases did not know the true nature of the most damaging virus of the last century: communism.

The shadow cast by his emails, made public last summer, is too long for anyone to see only the lights in his 50-year career, over which at some point the guy has obviously done some things right, including holding such a coveted position as chief medical adviser with presidents of both parties. This, by the way, could mean either that he did his job very well or that he did it badly enough to always keep his boss, whoever it was, happy.

Fauci, almost without moving his wings, managed to be for and against most of the opinions in the different topics of discussion about the pandemic, at different moments of the debate and depending on who his audience was.

Nor can we forget his 2012 paper in the Society for Microbiology, unveiled last year by the Australian. Oh, sad coincidence of fate! There Fauci spoke in favor of conducting high-risk viral experiments, even if in the course of doing so a scientist could become infected and unleash a pandemic. In particular, he supported gain-of-function viral experiments, which involve manipulating known viruses to make them stronger. Perhaps because the scientific community was well aware of his controversial views, Fauci was quick to argue with all his might that the Wuhan virus was of natural origin, insistently blaming the bat, which, certainly, is a nasty pest and could be blamed for everything in life, including inflation and the price of gas, but which, in all honesty, does not seem to have had much to do with the pandemic.

Fauci, in collusion with the Chinese communist regime, took it upon himself to discredit any investigation that would have hypothesized that the pandemic had its origin in the controversial laboratory, whether due to malpractice, clumsiness — who has never dropped a test tube in a colleague’s salad? — or biological terrorism.

In his emails, the doctor was desperate to pander to the Chinese regime — which ended up insulting him — and his research efforts, and he publicly called out the White House, saying, “I think finger-pointing will only set them back even further.” Fauci is the sort of guy who, if he were a cop faced with a mass murderer refusing to turn himself in, would just look at his fellow officers and yell: “Put down your guns! Don’t stigmatize the poor guy! Can’t you see he is trying not to kill anyone else for the day?”

Of course, if anyone should be grateful to Dr. Fauci, it’s ugly people. Thanks to his esoteric belief that wearing a mask on the street is good for something, all those who are uglier than an octopus have been able to flirt more than ever during the pandemic. Of course, the doctor is also responsible for the heart attacks suffered by their innocent partners as soon as they took off their masks.

Fauci defended the eternal closure of schools, the consequences of which, for the children, have not yet been studied; the overzealous police persecution of those who violated health regulations even without endangering anyone; and the obligatory nature of the vaccine. Regarding the latter, it is striking that Fauci thought pressuring China would be counterproductive to obtain the desired objective (the truth about COVID), and yet he thought it useful to put infinite pressure on those who did not want to be vaccinated in order to achieve the desired objective (that they should be vaccinated).

But what most characterizes Dr. Fauci in the midst of a health crisis is his ability to survive. We do not know if his contribution has saved many or few lives, but we do know that he managed to save one, his own — that is, his job. Part of that ability lies in the fact that he shares skills with the falcon. This animal is able to take advantage of air currents to stay in the same place, observing its prey from above, even changing its position over and over again. The falcon never changes its coordinates, never loses the vertical. Thus, Fauci, almost without moving his wings, managed to be for and against most of the opinions in the different topics of discussion about the pandemic, at different moments of the debate and depending on who his audience was. That made him as resilient as the coronavirus itself.

In short, I don’t think we will miss Dr. Fauci very much, but I wish him many hours of swimming, cocktails, and good reading in his retirement. And good health. We will always be left with the question of whether Fauci is a natural phenomenon or if he escaped from a Chinese laboratory.

Itxu Díaz
Follow Their Stories:
View More
Itxu Díaz is a Spanish journalist, political satirist, and author. He has written 10 books on topics as diverse as politics, music, and smart appliances. He is a contributor to The Daily Beast, The Daily Caller, National Review, American Conservative, and Diario Las Américas in the United States, as well as a columnist at several Spanish magazines and newspapers. He was also an adviser to the Ministry for Education, Culture, and Sports in Spain.
Most Popular
1
Crime Time
New York Attorney General Letitia James Must Resign — and Be Prosecuted for Abuse of Power
by Jeffrey Lord